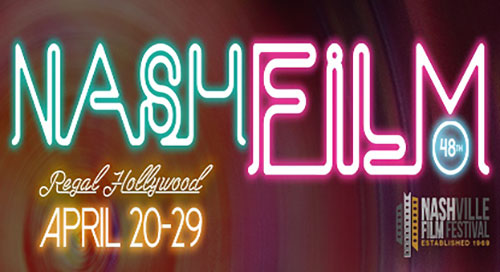 We are so proud that our city has The Nashville Film Festival. It’s one of the many contributing factors that have helped our fair city gain national ( and international) credibility in the world of creativity. This year it is bigger than ever making us wish we could clone ourselves to see it all!

Here is a list of what’s earmarked on our staff’s must see lists.

All the way to Tacoma
Songwriter / Performer Caitlyn Smith emarks on a cross-country trip on an Amtrak train joined by fellow Nashville-based writers.

Bomb City
In conservative Amarillo, TX, Brian Deneke is known for his green mohawk, dog collar, and the punk music shows he throws at a rundown venue known as ‘Bomb City’. High school footbal player, Cody Cates, is one of the popular, preppy kids. After losing a football game, Cody and a few friends have an altercation.

Cake
Eliza surprises her husband Thomas with a gift, a sex robot named Jade Oh. Eliza believes Jade Oh is the solution to her problems.

The Call of Charlie
A trendy Los Angeles couple sets up a blind date for two of their friends, one of whom is an ancient evil deity from beneath the sea.

Cassette: A Documentary Mixtape
Where would musicians and music lovers be without the cassette? This feature-length DIY doc tells the story of a once-ubiquitous format through one-on-one interviews with the inventor of the cassette, Lou Ottens. 90 years old and still a stubborn progressive.

Edge of Alchemy
In this handmade collage film, the silent-era actors Mary Pickford and Janet Gaynor return, seamlessly appropriated from their films of the 1920’s and thrust into a surreal epic.

The Gateway Bug
Over 2 billion people on earth eat insects for protein. Following the rise and dramatic fall of edible insect start-ups in America, this film exposes America’s disconnect with food as climate catastrophe, uncovering daily habits individuals can alter to fix the broken food system, one meal at a time.

Honky Tonky
All images were shot on 16mm film in the shadow of the Ryman Auditorium on Lower Broadway, a section of Nashville that has for decades attracted country music fans to its honky tonk bars.

Kandyland
In February 2016, rock ‘n’ roll trio Thelma & the Sleaze embarked on the world’s first “Intra-City Tour”. They played 31 shows in 29 days and raffled off a promotional mini-van in the process, in an unprecedentedly absurd publicity stunt that raised the bar for independent artists everywhere.

The Last Songwriter
Featuring Garth Brooks, Emmylou Harris, and Jason Isbell, THE LAST SONGWRITER shares the story of the remarkable women and men who have crafted some of the most influential songs of the past twenty-five years. It also prophiles a young writer trying to beat the odds and make a living in today’s music industry — an industry altered by evolving formats and innovations in streaming.

Lessons in Accidental Magic
Enamored with a girl he frequently sees at dinner parties, Liam attempts to win her heart by teaching himself to cook from a cookbook he finds at a rather unusual library.

Light Up The Night
Set in an Orwellian, futuristic 1980s the story tells the tensions flaring between rebellious citizens and robotic law enforcement. We are introduced to two dissidents as they take aim at the city’s looming, panoptic control tower, while local band The Protomen take the stage amidst the action, inciting unrest as they narrate the struggle.

The Little Stage
Bon Aqua, Tennessee – an abandoned building is on the verge of collapse until an old tape is found, revealing its historical significance.

Martha
A lifelong songwriter and musician, Martha Starin, a 92-year-old, has always dreamed of recording the songs she has written. So that’s exactly what we did.

The Meanest Man in Texas
In 1928, Cisco, Texas, a young Clyde finds himself in the wrong place, at the wrong time. Charged with murder, he is sentenced to death. Hours before execution, he is spared, and sentenced to life in prison at a Texas Prison Farm. Here he loses all faith, and is labeled “The Meanest Man in Texas.” After several escape attempts and two murders, he is locked away in solitary confinement for the duration of the entire second World War. Alone with no hope, he uses a bible, a dictionary and books to educate himself. He earns two degrees and becomes a writer.

Project X
A top-secret handbook takes viewers on an undercover journey to Titanpointe, the site of a hidden partnership. Narrated by Rami Malek and Michelle Williams, and based on classified NSA documents, Project X reveals the inner workings of a windowless skyscraper in downtown Manhattan.

The Rugby Boys of Memphis
At an inner city high school in south Memphis, Tennessee, an unlikely sport has arisen, and with it a team of untapped potential.

Straight into a Storm
A portrait of a hard-rocking band known for their substance-fueled live performances, the film details their evolutionary journey to becoming one of the greatest cult rock bands of our time.

The Wilkinson Family Band
In order to pay for their stay at a motel while on tour, Bob Wilkinson and his homeschool family band must sing a few songs. Bob looks to God for guidance, his family begins to question their father’s leadership.

Wishful Thinking
An introverted man wishes he could take back an awkward encounter with the girl of his dreams. A reverse time travel genie appears one day and grants him three wishes.

Your Ride is Here
Over the course of one night in Nashville, a jaded rockstar-turned-Uber driver chauffeurs a newly-appointed trainee.