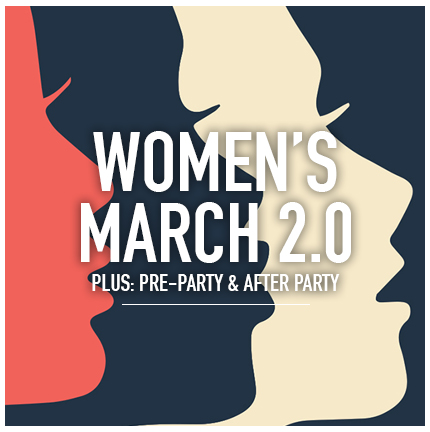 Now, one tumultuous year later, Nashvillians are planning to march again. We recommend checking out the local March-related events listed below. And if you don’t make it out to any of these, that’s okay—just make sure you get involved somehow!

Official Pre-Party for Women’s March 2.0: Third Man, BriteHeart, and Women’s March Tennessee are hosting a March kick-off at Third Man’s Blue Room on January 19 from 6 p.m. to 9 p.m. There will be sign-making, readings, music, snacks, and drinks, and you can find more info here.

Women’s March 2.0 Nashville: This is the official March—the real deal. There will be a conference and lunch at TSU Avon Williams Campus Atrium from 8 a.m. to 11 p.m., followed by a meet-up at 2 p.m. at Public Square Park. Then the actual March will commence at 3 p.m., beginning at Bicentennial Mall. Get all of the info here.