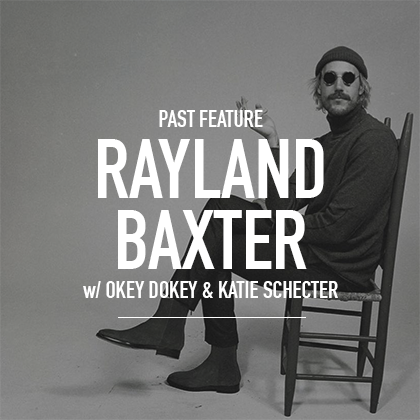 Were you one of the unfortunate souls who was just a tad too late to buy tickets to the Rayland Baxter show featuring Okey Dokey at The Basement East? Well, don’t worry—the show must go on. Due to popular demand, the gang is coming back for a second night, this time on July 19. Whether you missed your chance to buy tickets for the first night or just want to come back to do it all over again, you get a second shot at this excellent tag-team music extravaganza.

Like we said last week, past NATIVE cover story Rayland Baxter is back. And he’s here to celebrate his forthcoming record, Wide Awake. While recording the album, Baxter’s goal was to spend every waking minute creating, and—judging by the masterful songwriting found throughout Wide Awake—it seems like he met that goal.

Check out Baxter on July 19 with friends and fellow NATIVE alum Okey Dokey at The Basement East. Tickets can be bought in advance for $17 here, but they’ll also be sold at the show—that is if they’re still available this time around.