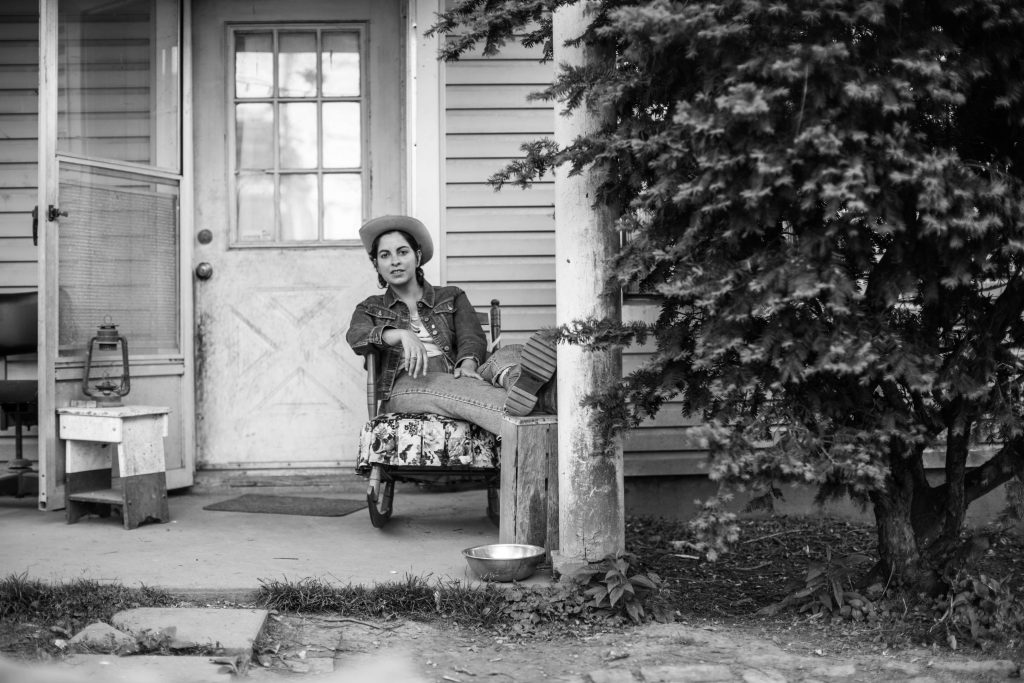 Like a lot of young Nashville artists, Becca Mancari is a transplant. But unlike many of her peers, Music City was never an end goal—it was more of a hurdle to clear.

“I think I always knew I was gonna end up here since I was young, but I really didn’t want to,” she says, cracking a beer in her ramshackle Eastside bungalow. “I thought it was really cheesy . . . I just knew this was the place that would be the hardest for me as an artist, in that some of the best songwriters are from Nashville, and I wanted to challenge myself. You have to work your ass off here.”

Born in Staten Island to a Puerto Rican mother and a Catholic Italian-Irish father, Mancari doesn’t fit neatly into any of Nashville’s boxes—and neither does her music. She’s not a country artist, although her songs are built on personal stories and down-home sounds. And she doesn’t think of herself as an Americana artist, either, even though American roots music is a primary influence.

“There’s something about wearing a hat all the time,” she jokes about her country look, adjusting the vintage felt cap that tops cropped silky black hair and dark, compassionate eyes. “Hats are so symbolic now, but I just always wore one, even as a kid.”

Mancari is gay, and she’s lived everywhere from West Palm Beach, Florida, to India. And with her debut album, Good Woman, she offers a gorgeous study in self-reflection, ultimately asking the question, “What is ‘good’ anyway?”

Arriving in September, Good Woman twists and turns with the wind. At times it shimmers like an ocean sunrise, then dives to the bottom of the sea under crushing pressure. Resurfacing dazed but defiant, it paddles hard for a distant utopian shore, but in the end is left adrift at the mercy of her heart—and the human ego. 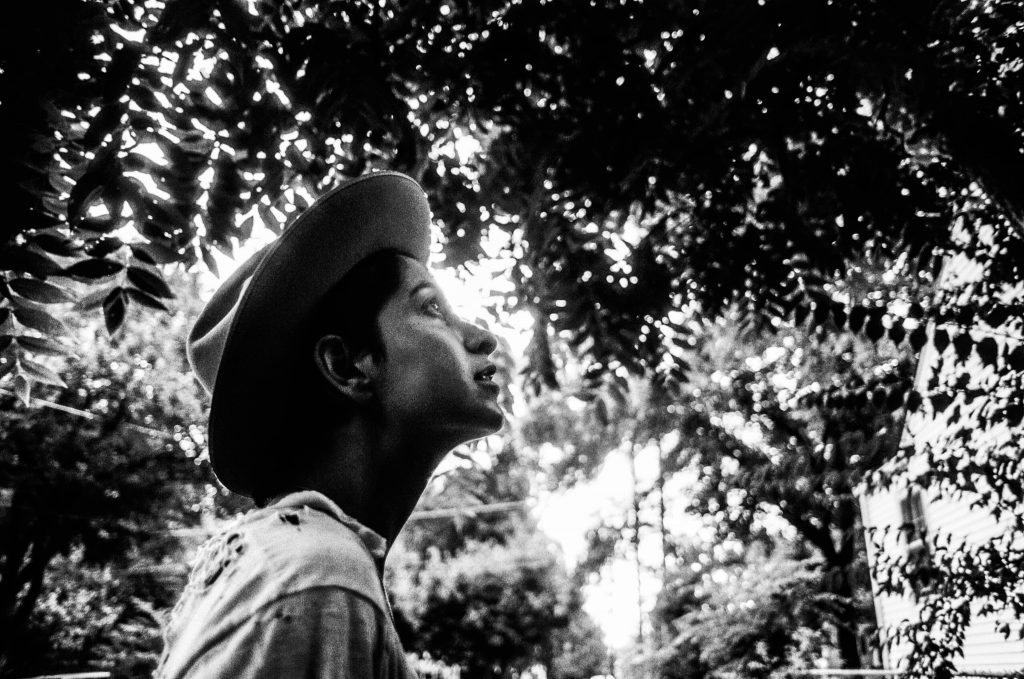 Chatting cheerfully at her kitchen table, Mancari puts on the self-deprecating air of “just another songwriter,” but there’s more going on inside her head than just music. She’s gifted with a flair for soul-searching and razor-sharp emotional observation, all brought out by a fascinating background of not fitting in.

After growing up Catholic in Pennsylvania and moving to Virginia for college, Mancari discovered roots music after falling in with a group of train hoppers who used her rail spur town as a jumping-off point. She came out of the closet around this time and found support with a group of misfits—those who were not welcome in polite society but made a place for themselves nevertheless.

Inspired by the freedom of their lifestyle, she picked up and moved with a girlfriend to Arizona, got her heart broken, and boarded a bus for New Mexico. From there she headed to India on a whim, then continued on to South Florida to work as a janitor and eventually a high school teacher.

Feeling lonely and cut off from her parents—who struggled to reconcile her identity with a lifetime of traditional faith—the songs began pouring out. After a few months of trying to inspire her students, she had an epiphany.

“I’ve always had music in me, and I was telling these high school kids, ‘You can do anything and you should follow your dreams,’” she says. “I remember when I finally took it to heart myself and was like, ‘I should go to Nashville.’ They thought I was going to be on American Idol.”

If you listen closely enough, the story plays out on Good Woman—from “Long Way Down” (all about missing Virginia and that first girlfriend) to the deserted heartbreak of “Arizona Fire.” Meanwhile, “Golden,” which is about a roommate’s divorce, was written feet from where she now sits. Others, like “Dirty Dishes,” reveal an ongoing sense of self-doubt.

“There’s a lot of state names in there, and I think that’s from traveling,” says Mancari. “Heartbreak is one of the elements, but it’s also a lot of spiritual stuff too—my own fight with believing something but not in the way I was taught it, [and] being gay. How do you reconcile that with a faith that often says you can’t be both?”

Good Woman was produced by Kacey Musgraves’ guitarist Kyle Ryan, and the sound is as unique as Mancari herself: delicate-but-determined vocals are fused to spacey steel, jangling electric guitar, and a rock-solid rhythm section.

“I think it’s like if country music got an injection of Radiohead,” she says with a chuckle. “Our hope is that we’re doing something that respects the roots but also has space and the future and the galaxy in it.” 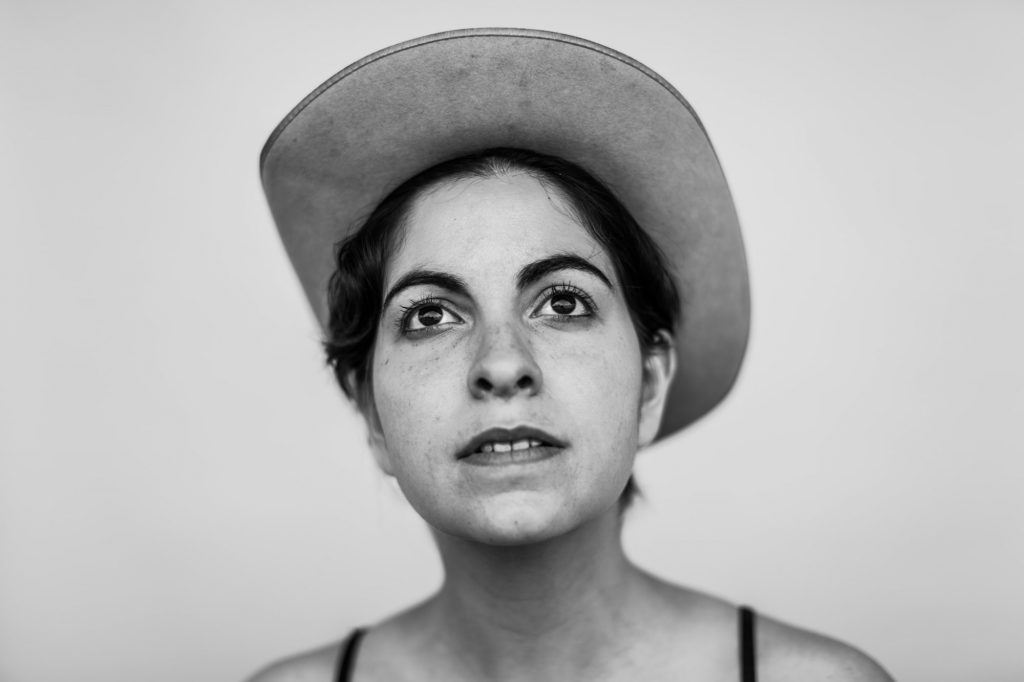 Although she doesn’t go around introducing herself as a gay woman, Mancari recognizes it’s an important part of her artistry. As an “untrained” musician, she says she can only sing what she knows.

“It does infiltrate my songs,” she admits. “I mean, I write songs like ‘Summertime Mama’ that [are] so fun and literally just about having a crush on somebody and wanting them to notice me. But then I write a song called ‘Devil’s Mouth’ about my family, and it’s about this idea of being really upset with them. The words are harsh—‘Mama ain’t got no time / Daddy ain’t got no pride / You’ve been a long time running / You’ve been a long time gone’—but that’s how I feel.”

Not afraid to use pronouns in her love songs, “Summertime Mama” is clearly about falling for a girl—and it’s touched a nerve in Nashville. The song has been in rotation on Lightning 100 for more than a year.

“I think this town is craving that,” says Mancari. “I think they want it, and it’s becoming something they know that they actually need. They’re waking up and saying, ‘There’s a whole big world out there, and everybody’s coming from different places. We need to hear their stories.’”

Good Woman’s title track goes beyond identity issues and asks a question that’s at the heart of Mancari’s personal journey: “What does it mean to be a good person?” Based on a true story, “Good Woman” tells a first-person account of meeting a homeless woman (who happens to share Mancari’s mother’s name) and her young daughter. She takes the woman to a hotel and pays for a night’s stay, all the time wondering why she hopes someone else will witness her kindness. Is she just pretending to be good? And what does “good” really mean? Depending on your viewpoint, she’s either a saintly soul or a misguided enabler.

"THERE'S A WHOLE BIG WORLD OUT THERE, AND EVERYBODY'S COMING FROM DIFFERENT PLACES. WE NEED TO HEAR THEIR STORIES."

It’s a deceptively powerful message for a time of social media echo chambers and us vs. them politics.

“We live in a Trump era, and sometimes I just want to say, ‘They are bad people,’” she says with a sigh. “But I don’t even know where they come from. I went to a Trump rally the other day like, ‘I never talk to people like this,’ and I spent most of my time there trying to understand. If we don’t do that and start talking to each other, we’re in big trouble.”

She hopes to do some talking this summer while on tour with good friends Hurray for the Riff Raff and SUSTO, and maybe even move a few unsuspecting hearts in the process. Whether she believes it or not, it seems that deep down Mancari has known what “good” is all along—and she’s no longer traveling that road alone.

“Hopefully my life isn’t just about being cool,” she says. “I’ve seen it and I know it’s not for me, and maybe that goes back to the way I was raised. My parents are equally some of the hardest people and some of the best people I’ve ever known, because they taught me to love others—that it was more important than being famous.”

Becca Mancari will perform with Hurray for the Riff Raff and SUSTO on May 3 at Mercy Lounge.