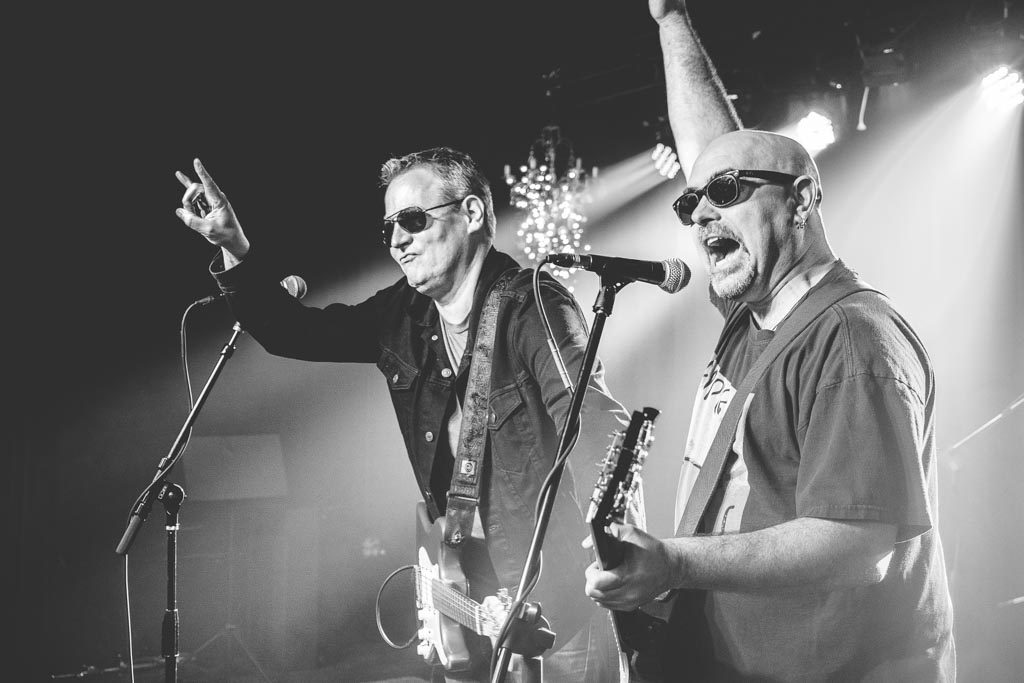 MIKE GRIMES IS SITTING ON A COUCH in The Basement East’s green room, leafing through some papers from a filing cabinet left behind by one of the building’s past occupants.

“This is insane,” he says, holding up a yellowed invoice and showing it to his business partner, Dave Brown. “Look! A printing order from January 1972.”

The Basement East is celebrating its one-year anniversary, and its two owners are feeling a bit nostalgic. Their venue may be young—a downright infant compared to long-running clubs like the Exit/In, which opened its doors back in 1971—but there’s some serious history here. In the main room, streaks of paint stretch across the floor, reminders of the building’s earlier days as a printing shop. Backstage, stacks of paperwork sit inside cabinets that haven’t been opened for years. Everything is different outside the building’s walls, of course, where construction crews and out-of-town developers have been giving East Nashville a facelift for the last half decade. Mike and Dave both lived in town long before Nashville became an It City, though, and their approach to The Basement East has been a simple one: move forward while honoring the past. 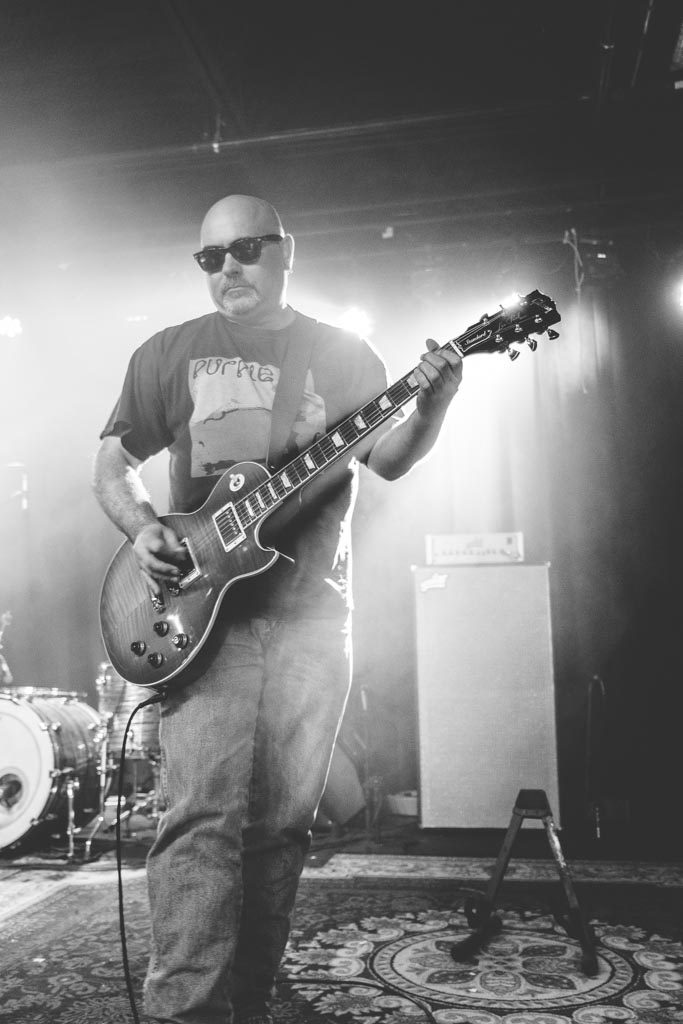 There’s a lot of past to honor. A dozen years before The Beast (as it’s now commonly known) held its first show in April 2015, Mike and Dave both worked at smaller venues on Woodland Street. Mike was the owner of Slow Bar, a short-lived watering hole and rock club that helped kick off the earliest days of East Nashville’s growth spurt. Long before Five Points became a destination for those looking to eat French food, groom their golden retrievers, and order sushi, Slow Bar— which occupied a squat building that now houses 3 Crow—was a sign of something new brewing across the Cumberland. The stage was small and the beer selection limited, but Mike’s club still drew artists like Ryan Adams, the Shins, Kings of Leon, The Postal Service, and the Black Keys to a part of town that many considered dangerous.

Slow Bar’s original website still exists, filled with low-res pictures from some of those infamous gigs. There’s a shot of a mop-headed, twenty-three-year-old Jason Isbell performing with the Drive-By Truckers in 2002, a trio of photographs from an Alex Chilton show, and shots of Nashville icons like Lucinda Williams and Wilco cofounder Ken Coomer. Mike is happy to recount some stories not represented in the photo galleries, too, like the time the Black Keys performed for a $100 guarantee—a sum he initially wrestled with, believing it to be too much for a new band—and the evening Ryan Adams wrapped up an impromptu, half-lit gig by losing a fight with a snare drum.

“He jumped into the drum kit and smashed his chin and then ran out the door,” Mike says of Adams, a former Nashvillian who recorded his solo debut, Heartbreaker, across the street at Woodland Studios. “I guess he was embarrassed. It wasn’t even a real show! No one was scheduled to play that night, so I called up [Adams’ former bassist] Billy Mercer and said, ‘What are you doing? Do y’all just wanna come over and play?’ Meanwhile, Ryan’s been hanging out at 12th & Porter, getting drunk, so next thing, they come over and jump onstage for about twenty minutes and go crazy, then they were done.”

“And then the next night, he was on national television with this big-ass bandage across his face,” Dave adds, laughing. “It looked like a Kotex!” Mike yells. “It was this really big piece of gauze. There he was, doing a Willie Nelson tribute at the Ryman on TV, with something that looked like a tampon on his face.” 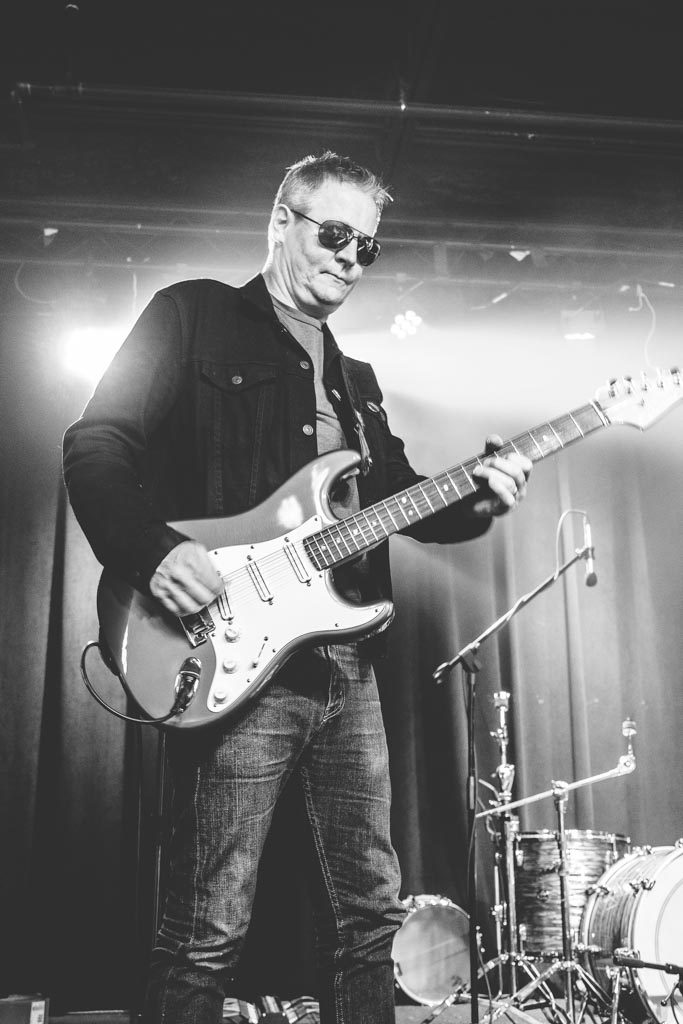 Slow Bar closed down in 2003 after three years of operation. Around the same time, Dave was starting to build some buzz of his own at Radio Cafe. Gillian Welch, Guthrie Trapp, and Todd Snider were regular performers at the East Nashville restaurant, which occupied the first floor of what is now Mad Donna’s. Initially hired as a bartender, Dave began booking bands after word got out that the food wasn’t very good. He needed some way to get people— preferably people who drank a lot—through the door. Under his direction, music became Radio Cafe’s calling card.

“When Slow Bar closed, we were the only rock venue in the neighborhood for a few years,” Dave says. “The 5 Spot was operating intermittently, doing stuff like the Old Time Pickin’ Parlor. Travis [Collingsworth] and Todd [Sherwood] hadn’t come into the picture over there yet. We had a lot of awesome neighborhood rock bands in East Nashville that nobody knew about, though—like Alcohol Stuntband, Black Diamond Heavies, and The Clutters—and 5 Spot wasn’t booking that kind of stuff, so we decided to.”

Despite working within two blocks of one another, Mike and Dave didn’t team up until 2005, after Mike headed back to the west side of the river and moved his record store, Grimey’s, into a Victorian mansion off 8th Avenue. He started hosting shows in the cellar beneath the shop too. The Basement was a difficult sell at first—the parking lot was small, the ceiling low, and the bar virtually impossible to access once the room filled to capacity—so when Dave came to Mike and offered his help, it didn’t take much arm twisting. With Dave on board, The Basement began booking 7 p.m. “early shows” in addition to their usual gigs at 9, doubling the bar’s chances of breaking even. It worked. The Basement became a Nashville institution, and the two have been partners ever since. 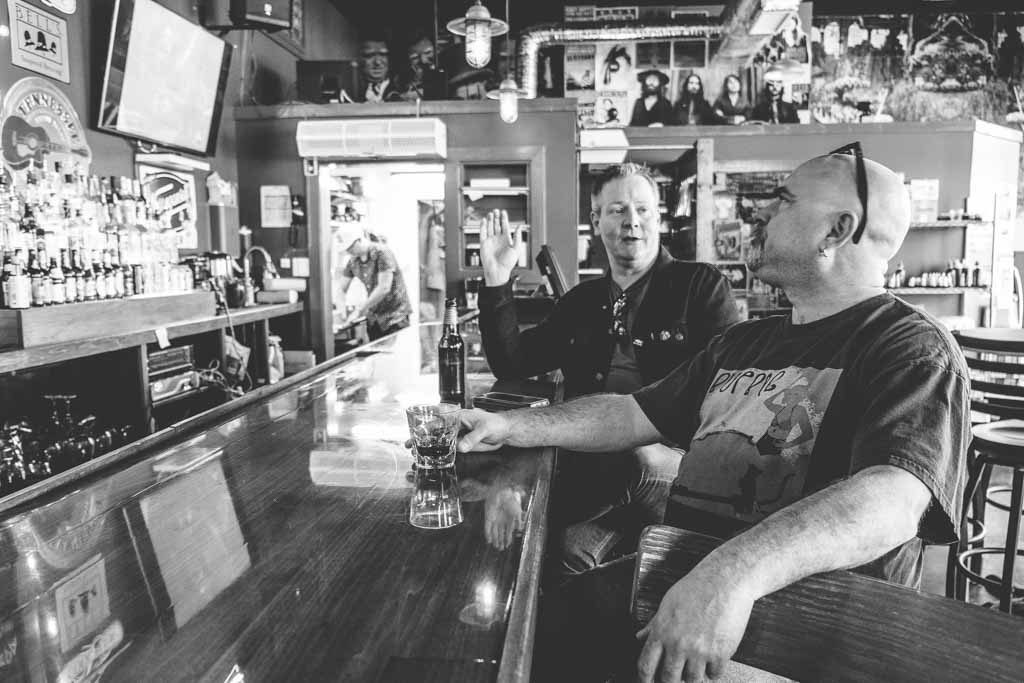 It was Dave who first saw the “For Rent” sign in front of a large, 14,000-square-foot building at 917 Woodland Street. He was driving to a listening party at the original Basement in late 2014 when his gas light came on. After filling up at the BP station in Five Points, he decided to take a shortcut down Woodland. Several blocks away, the future Basement East loomed in all its white-washed, vaguely retro looking glory. He was hooked. Mike drove by the place later that afternoon to take a look too. Within days, the two had gathered together enough cash to convince the building’s landlord to give them first dibs. They signed the lease several days before Christmas, then began a four-month period of intense renovations.

Slow Bar and Radio Cafe had both been accidental music venues, with barrooms that were retrofitted to accommodate bands. From the start, though, The Beast was a different animal. With help from sound engineers like Keiffer Infantino and a team of contractors, Mike and Dave fine-tuned the acoustics of the building’s top floor. They added layers of soundproofing materials to the ceiling and hand-built a thirty-foot stage, putting all the posts on floating rubber disks to avoid any feedback-causing vibrations from the wood. They then raised the stage by three feet, a height that gave a clear view to pretty much everybody in the room. They built a bar that stretched most of the length of the main room, then added an outdoor deck and smoking patio that covered most of the room’s width. Later, after the venue opened, they launched The Pub at The Basement East, an adjacent eatery serving up a mix of Asian and Mexican food. Dave, who eats there three days a week, raves about the Bloody Mary. 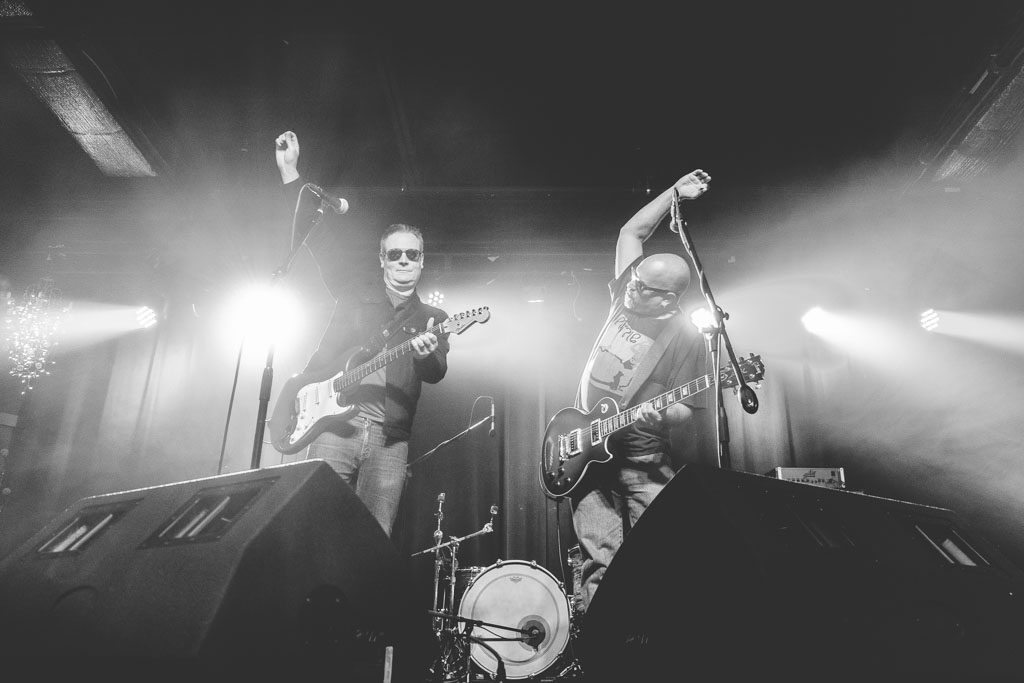 It’s easily the biggest venue in East Nashville. Mike and Dave are proud of the place, but they’re even more happy with The Beast’s music schedule. The place has become a home for locals, touring bands, rock acts, hip-hop artists, headbangers, singer-songwriters, and Music Row country chart-toppers. Hometown heroes like Margo Price, The Wild Feathers, and Cage the Elephant have packed the room to capacity. Queer Dance Party held its New Year’s Eve party at The Basement East, and there’s even a one-act play scheduled for August.

Dave is happy with the diversity of The Beast’s schedule. “There’s seven billion people in the world right now,” he says. “There’s so much music out there. You have to look outside your personal preferences sometimes, because it’s not wise to let your own personal tastes limit what you put on in your venue. There are a lot of people out there who like music just as much as you—they just like different music. You can’t forget about them.”

The Beast’s reputation growing too—not just in Nashville, but on an international level. Terry Rickards, who booked shows at Mad Donna’s and The 5 Spot before joining The Beast’s staff late last year, points to his clogged email account as proof. “We get booking requests from all over the world,” he explains. “Jamaica, Africa, Australia, Germany. I think the national awareness is growing, and I think it’s bigger than that too.” 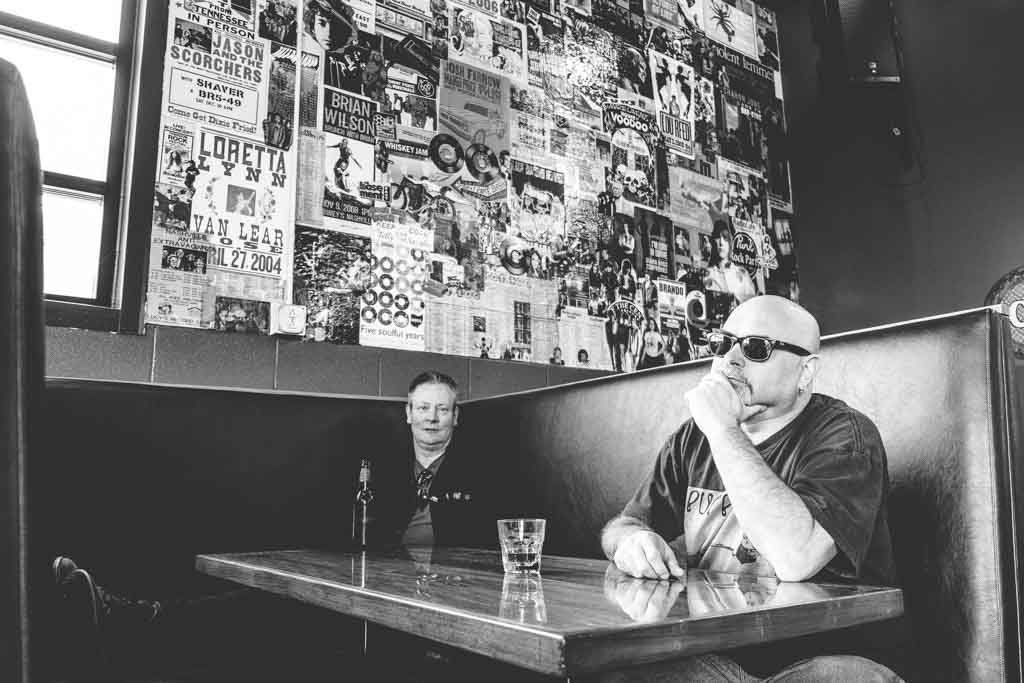 For The Beast’s owners, a growing reputation means growing profits. They’ve been talking about more renovations and upgrades to the building, only half of which is currently in use. They’re expanding The Pub’s offerings, including a recent brunch menu. They’re actively bringing in bands outside of Nashville. But at the end of the day, they’re still focused on improving the neighborhood that gave them a start back in the early 2000s.

“Some people wanna know what our take is on ‘the New Nashville,’” Mike begins, “because they think we’re semi-elder statesmen or something. And I’ve heard a lot of those people complain about the traffic and the growth and everything. Just go on Facebook and look at the comments on the East Nashville group, and you’ll see people bitching about everything! But I’ve been here as long as anybody. I’ve been waiting for all of these new people to get here. Yeah, the traffic is bad at times. But overall, I think all of this growth is phenomenal. Anyone who moved here seven years ago and thinks that makes them part of the Old Nashville, and it gives them a right to bitch about stuff . . . Well, fuck that shit. I think everyone should be very happy with where we are. Because if you take a look around, you’ll know this city is incredible.”

“It’s a growing, thriving, bustling place, and it’s just getting better,” adds Dave. “If you’re a music lover—if music is the thing that means the most to you—then this place is the best place on earth.” 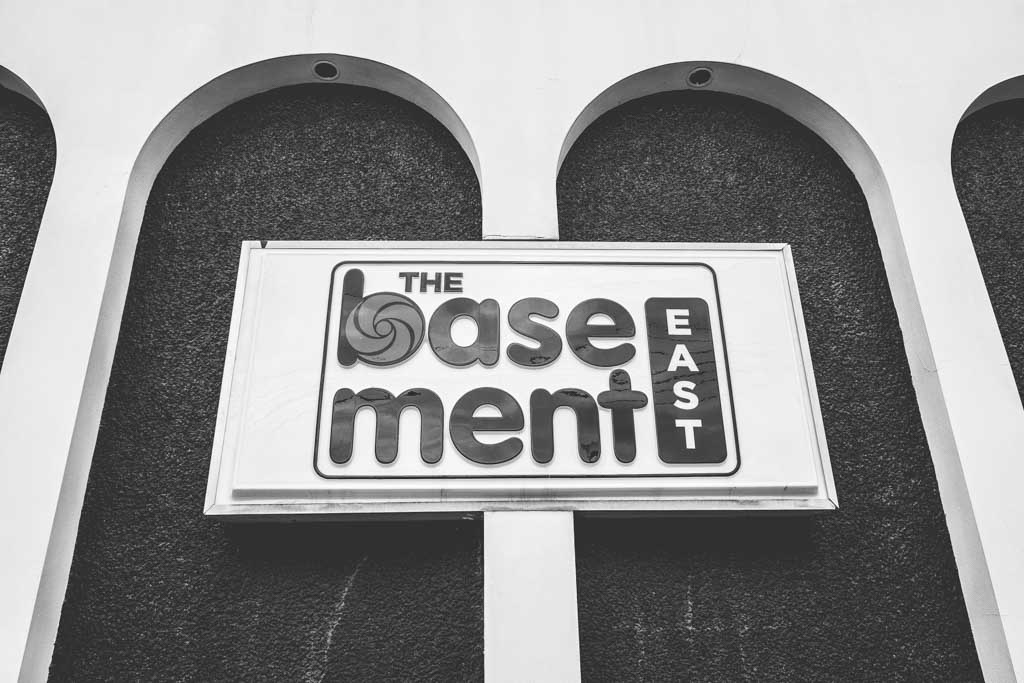