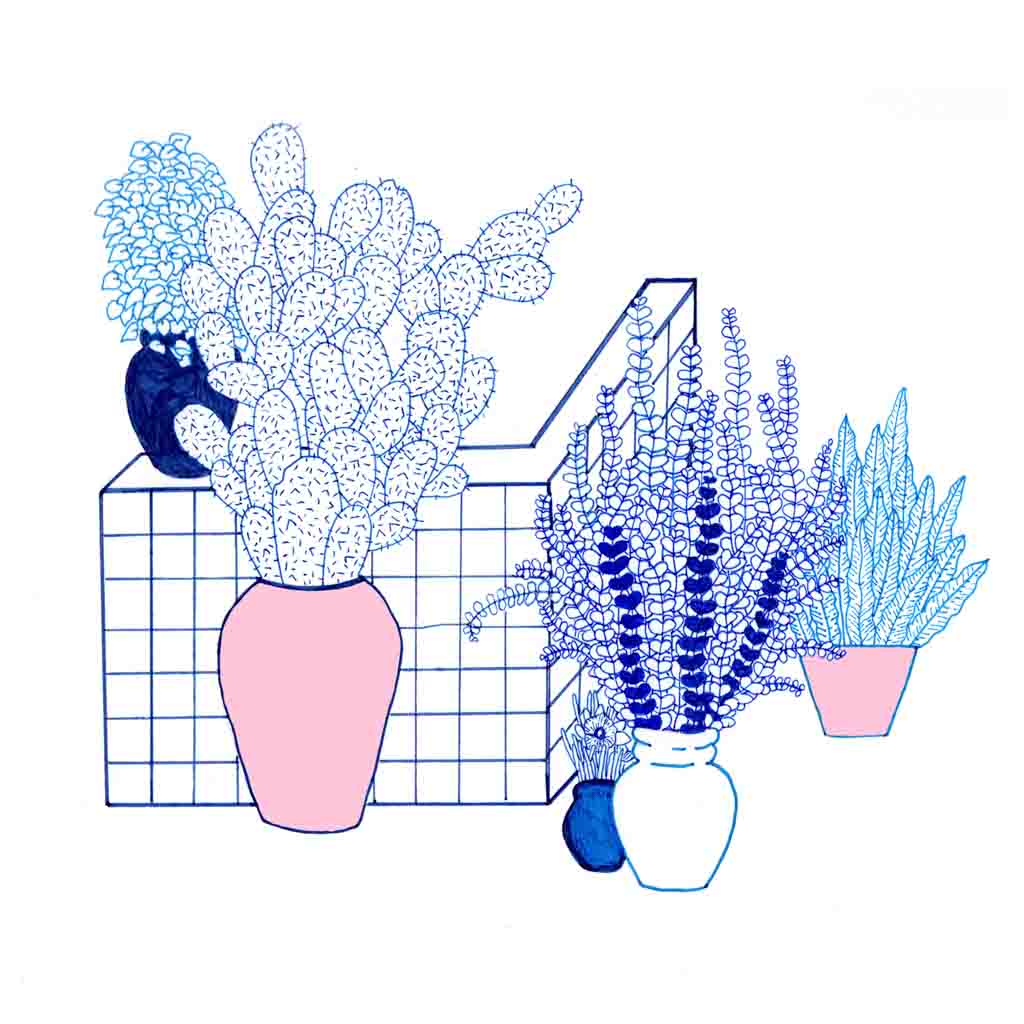 THERE IS NO “DARKNESS” OR “LIGHTNESS,” ONLY “INTEREST” OR “DISINTEREST.”

In refusing this binary, I have forced myself to discard the veil of shame, taking with it the doubt and uncertainty that is seemingly required in creating. The sting of embarrassment or regret that, for reasons unknown, persists within us longer than emotional markers of success is a testament to its importance. I celebrate the former because of its salience, and I cloak my illustrations with similar moments of shame that echo a pubescent irritation regarding my body and the bodies of others.

No one is immune to abuse, fumbling at the kitchen table when you’re finally home alone, prioritizing your desires and responsibilities despite your seasonal affective disorder. This feeling of futility and stasis sprouted the nature, mother series, wherein figures inspired by the mythical Mother Nature are domesticated in mundane interior spaces, surrounded by industrial comforts and potted plants. The emphasized negative space implies a vastness previously seen only in nature. The flowers and plants are painstakingly detailed, while the fleshly bodies are blankly matted, as if their presence is only an afterthought. The bodies operate as a pretext to the compartmentalized moments of natural splendor, as the figures gaze blankly ahead or nod off in front of the TV. 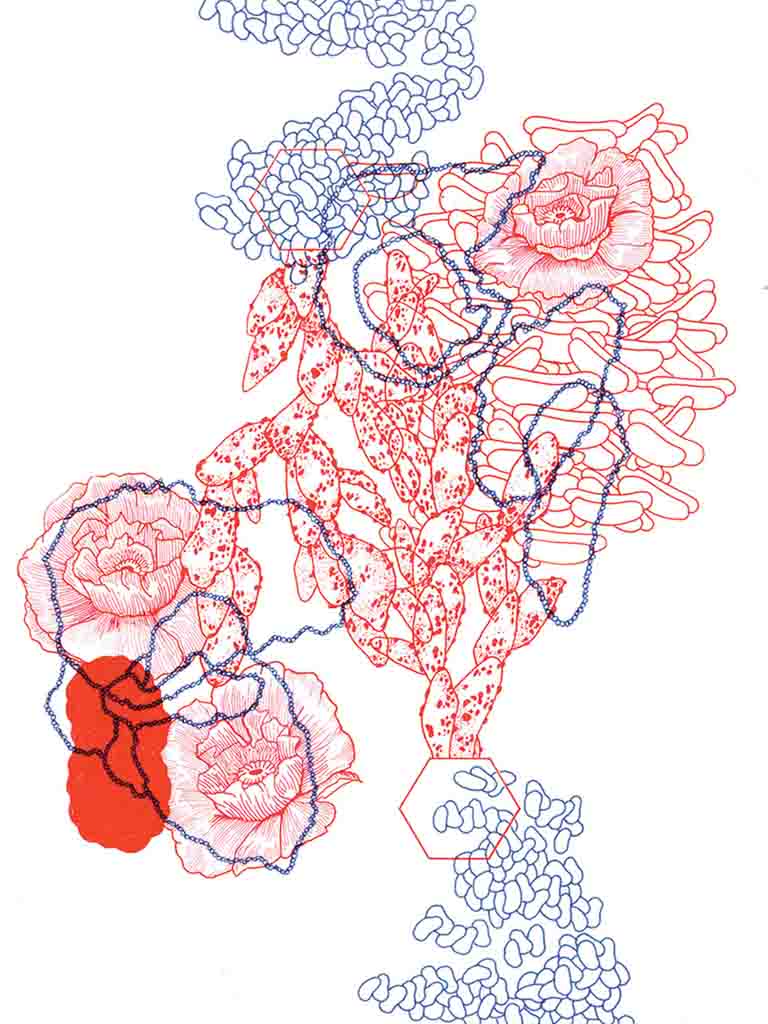 Simultaneously, this environment encapsulates the potential vastness of nature and the lackluster dimensions of a cramped apartment. Wayward structural objects and furniture further this indoor expanse of space, while providing further contrast between organic and inorganic worlds. The space accommodates uselessness despite the promise of growth, echoing a sense of goddess-oriented fanfare within the confines of stunted adulthood.

The hushed detachment seen in nature, mother originates in the fat pussy series; bright red and navy blue layers of imagery form patches of texture that weave between spatial planes, compartmentalizing images based on color, form, and placement. The individual images are tinged with a pubescent anxiety and a penchant for destruction that I’ve never grown out of. The selective focus of the drawings takes everyday objects and configures them as symbols, elevating them in both the visual and the conceptual hierarchy.  —CHELSEA 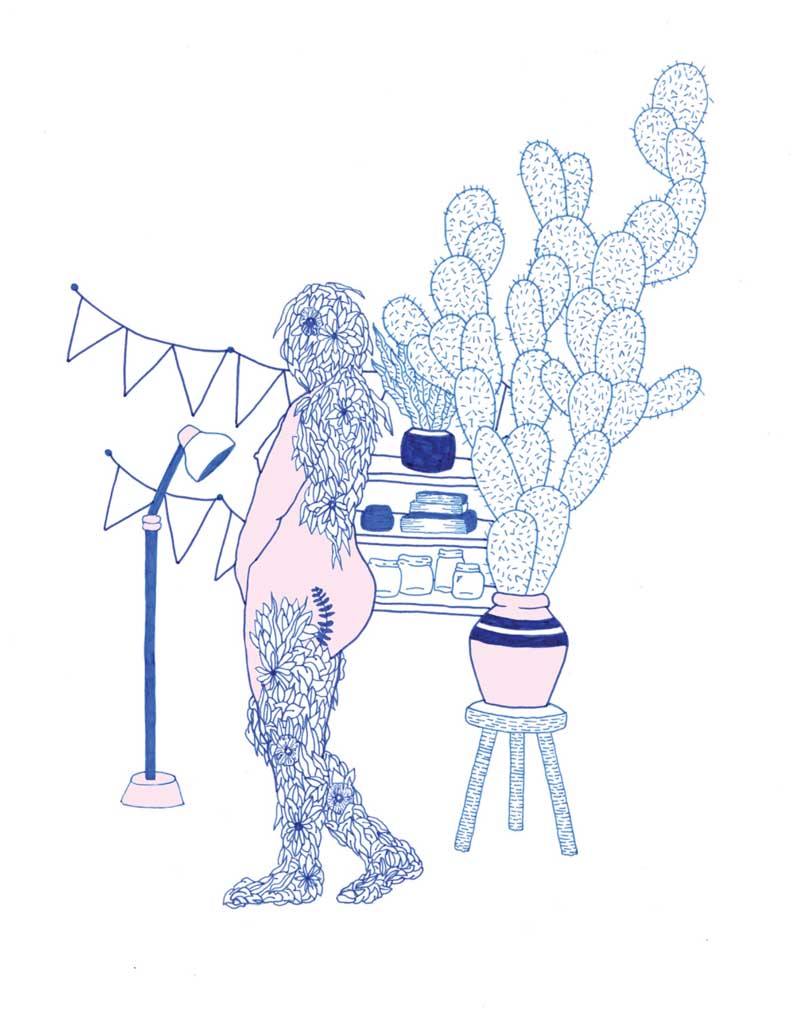