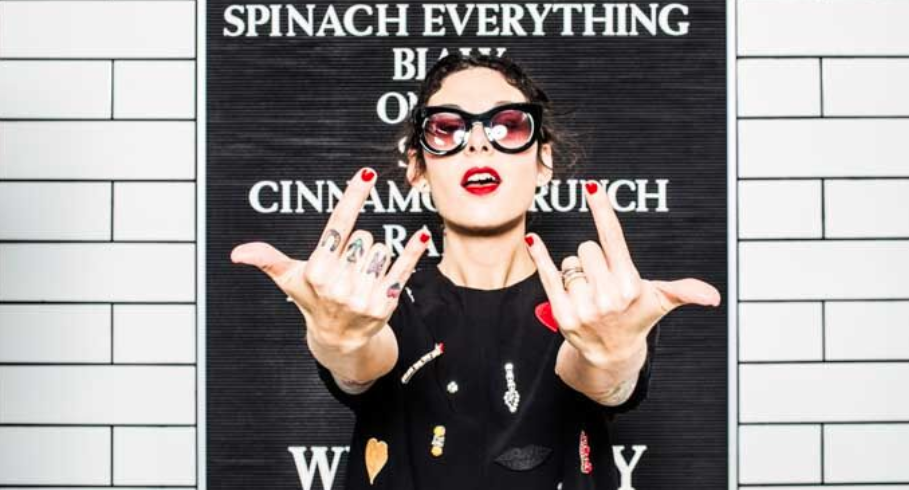 FIFTEEN MINUTES AFTER ARRIVING, I finally saw some color. Next to me in line, someone said something about being “overwhelmed,” and I swear there was at least one audible gasp as we stepped forward.

My small party had arrived at the restaurant earlier and taken our place in line. As we inched forward, we had only seen varying shades of black and white: the stark blackness of the painted brick exterior, the dull beige of the concrete steps, the smooth silver of the steel handrails, the striking white of the doors, floor, tables, and indoor walls.

We didn’t realize it, but with each step, our sensitivity to color was growing. As we finally passed through the white doorframe and into the main dining room, our eyes were shocked. In front of us was a huge cooler full of rich pinks, deep purples, reds, yellows, greens, and, yes, more white. The unexpectedly full case of vibrant fish, salads, cream cheeses, and dips was jarring in the most welcome way. And this effect was no accident.

“We wanted the colors of the food to speak for themselves,” says Heather Speranza, who owns Proper Bagel along with her parents and husband.

“We made everything else a backdrop and kept it very clean.”

It’s one of the many incredibly well designed details of the new upscale eatery and market located on Belmont Boulevard. Since opening its doors in mid-January, Proper Bagel has been a hit with the Nashville public, most of whom are consistently willing to wait in lines that extend out the door and nearly into the street to get a taste of some authentic New York bagels. The food, the ambience, and the service are all executed to precision. That’s because the family behind the spot has had plenty of practice to get it all right. 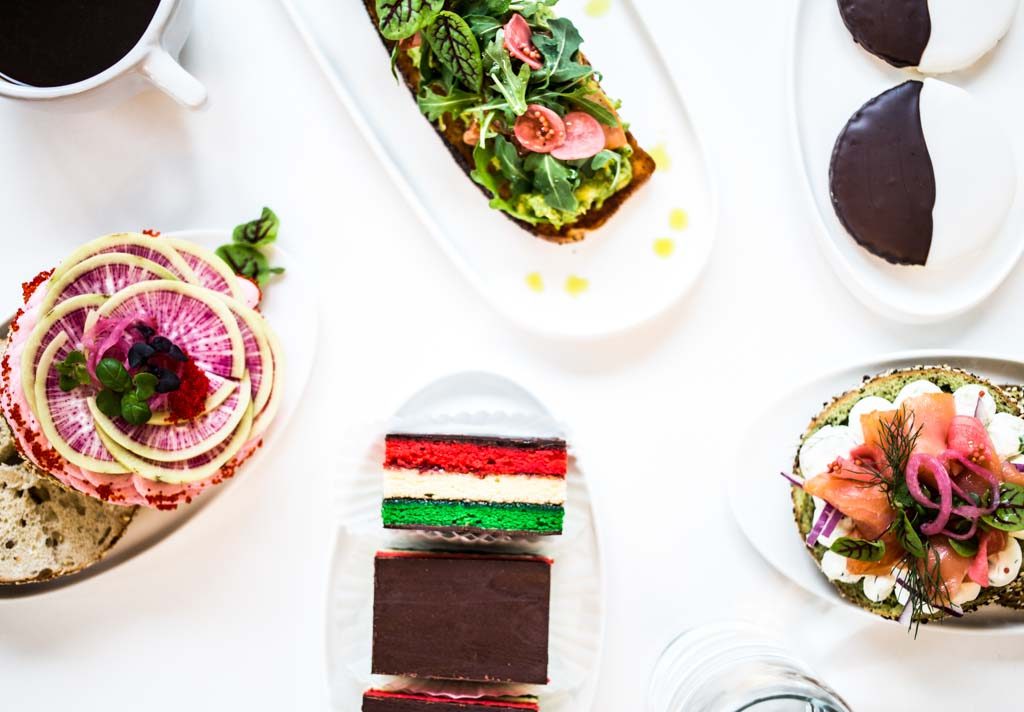 “People have asked us if this is our first bagel shop, and I think it’s important to know that it would be pretty brave and bold of us to be doing what we’re doing and not have the background that we do,” Heather says.

The Speranza family has been perfecting the art of bagel making for the last thirty-five years. Heather’s parents, Marcy and Carmine Speranza, opened their first bagel shop, Bagels Unlimited, in the late ’70s in Huntington, Long Island, when Heather was just eight months old. Since then, they’ve owned (and sold) another three shops, always operating only one restaurant at a time so that they can maintain complete control of the quality.

“We are not and never have been absentee owners,” says Marcy. “We’re here every day working just as hard as our staff to make sure people are happy. We want to give them a little piece of New York, and we’re proud of that.”

When I return to Proper Bagel one evening after close to meet up with Heather and Marcy, I see the evidence of that hard work. Though the shop has been closed for more than an hour and everyone else has already gone home, Marcy sits at a back table about to begin a long-awaited meal. While her mother eats, Heather hurries around looking for the slightest smudge to clean on the all-white tables, walls, and floors.

“I’m always saying to my staff, ‘It’s really white in here. We’ve got to keep it white,’” she tells me as she gathers her MacBook and water and looks for a place to sit. “She’s really OCD with cleanliness, even more than me,” Marcy chimes in.

Heather’s smiling silence at her mother’s comment suggests she’s proud of her obsessive attention to detail. In striking contrast to her white surroundings, she’s impeccably dressed in all black, her dark hair pulled tightly behind her head. She’s wearing thick, black-rimmed cat eye glasses, a black bandana around her neck, and lightning bolt earrings. The space and owner’s superbly crafted colorless palette begins to make more sense as I hear their story. 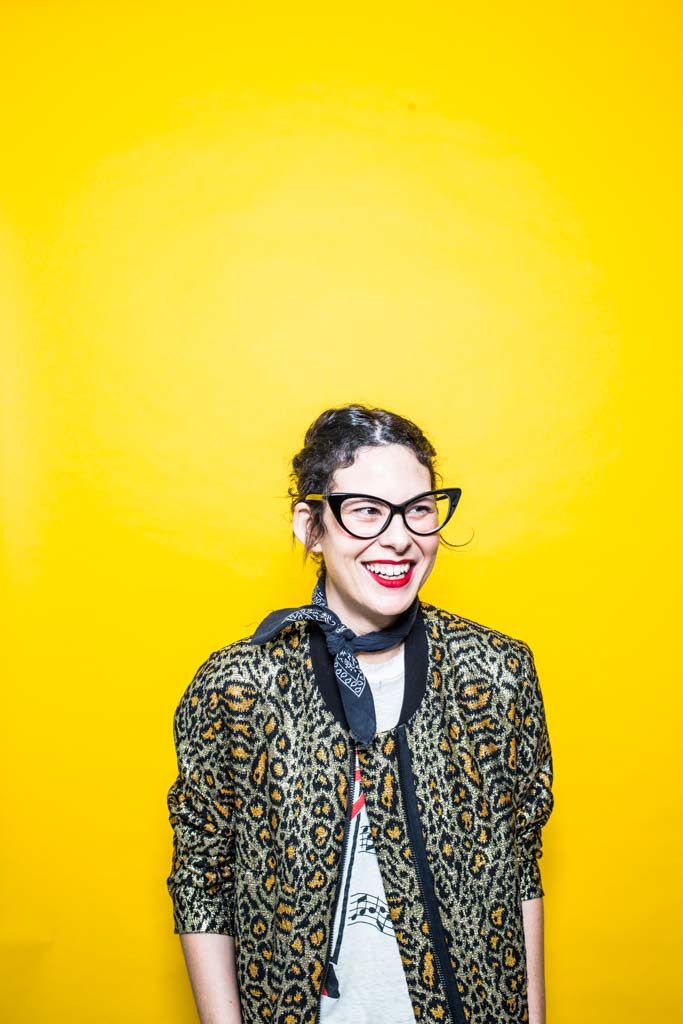 After graduating from the Fashion Institute of Technology in New York in 2000, Heather spent the next fifteen years active in the fashion industry. During that time, she worked for renowned houses like Marc Jacobs, Steven Alan, Daryl K, and Betsey Johnson, where she met her husband, Alex España. The two eventually moved to L.A. so Heather could run a New York–based vintage luxury clothing store called What Goes Around Comes Around as Alex continued his own pursuits in the music industry.

While Heather and Alex were on one coast, her parents were on the other. Around the same time that Heather graduated from college, Marcy and Carmine left New York to escape the cold temps and open their fourth bagel shop, Way Beyond Bagels, in Delray Beach, Florida. Though they ran a successful business in the Sunshine State for nearly fourteen years, they knew they wanted to be closer to family. There was only one problem: Heather and Alex refused to move to Florida, and Marcy and Carmine wouldn’t go to L.A. So they set out looking for a place where they could all move together.

A few years ago, while Alex was on tour with KISS, he visited Music City and thought it might be a good fit. He threw the idea of Nashville into the ring, and everybody made a trip to check it out. Attracted to the city’s music and culinary creativity, the family decided to make the move. They signed a lease on Belmont Boulevard in August 2014 and began work with architect Patrick Avice du Buisson to ready their new restaurant. Though the buildout was scheduled to only take four to five months, an excess of unexpected construction problems slowed their progress. In the end, they had to work all the way up until the night before they opened earlier this January to get the place ready for business.

“There [wasn’t] one thing in here, not even a stick of wood, that we could use again,” Marcy says, explaining how they had to reconstruct much of the building in order to safely gut the interior walls and open the space for a dining room. Heather corrects her mom and points to the windows on the side of the building. “Oh yeah, the window and the original ceiling of the front porch were the only things we were able to keep,” she corrects herself.

Though their mother-daughter relationship is evident both in their looks and their interactions, Heather and Marcy’s demeanors are quite different. Heather sits close by and leans forward often to talk, while her mother, whom she calls by first name, sits a table over, reclining against the large gray seatback. The New York accent, so apparent in the mother’s voice, is much harder to detect in her daughter’s. Like Heather, Marcy is also dressed in all black, though in much more casual athletic gear, complete with a black cap pulled low over her head. In one of the most surprising differences between the two, Marcy says she loves to cook and has for most of her life, whereas Heather admits that she’s terrible at it. “I’m a lost cause in the kitchen,” she says, embarrassed.

Her lack of culinary skills is no cause for alarm because at Proper Bagel, there are already a lot of cooks in the kitchen. The family has employed the help of two expert chefs to expand the variety of the offerings. Savory Chef Joshua Simpson, a native Southerner who was trained in San Francisco, mans the back of the house, snipping microgreens and plating everything from bagel sandwiches to glazed sweet potatoes with impeccable presentation. Then there’s Heidi Kohnhorst, the pastry chef who was born and raised in Nashville but has worked with some of the world’s top chefs in New York for fifteen years. She merges old-school New York staples like black and white cookies with other classics like brownies and muffins.

“We really lucked out with our chefs, because we are super particular about the way things are done, and they have the same mindset,” Heather says.

But just because they have some extra help doesn’t mean the family doesn’t stay furiously busy. The day begins early for the men. Alex (who was trained by his father-in-law) and Carmine show up to the shop sometimes as early as 3 a.m. to start baking the day’s fresh supply of bagels. The women get to sleep in a little longer, but unlike their male counterparts, they stay all day. As manager, Heather runs around continually making sure everything is running smoothly. Marcy, on the other hand, spends much of her time in the same spot, skillfully hand slicing all of the fish, which is flown in from one of the oldest smokehouses in Brooklyn.

“I know when people read that they’re like, ‘Oh, okay, it’s from Brooklyn, cool,’ but we’re talking old-school Brooklyn” Heather assures me. “We’ve been getting our fish from them for over twenty-five years, and it’s very important for us to have those roots. We’re not just trying to be the cool kids.”

So how, exactly, is a “proper bagel” made? The ladies take me to the back to give me a tour. They explain that many bagels these days, especially those served at chains, are rolled into a rack oven, then baked or steamed. True bagels, like theirs, must be boiled. But in order to keep the dough from breaking apart in the boiling water, it has to be rolled the day before and refrigerated overnight. When Carmine and Alex get there each morning, they take the refrigerated dough and boil it for a little less than five minutes. After that, each bagel is placed on burlap boards and inserted into an oven, where it’s rotated a few times, flipped, and then rotated again, allowing for a good, chewy crunch on both sides. Carmine also makes all of the various salads and delicious-looking cream cheese options they offer.

“In all of the other stores, specifically in Florida, we were only able to be so creative with our menu,” Heather explains. “Nashville has such a community of culinary creativity that it’s allowed us to get a little funkier with items like our cream cheeses, for example.” 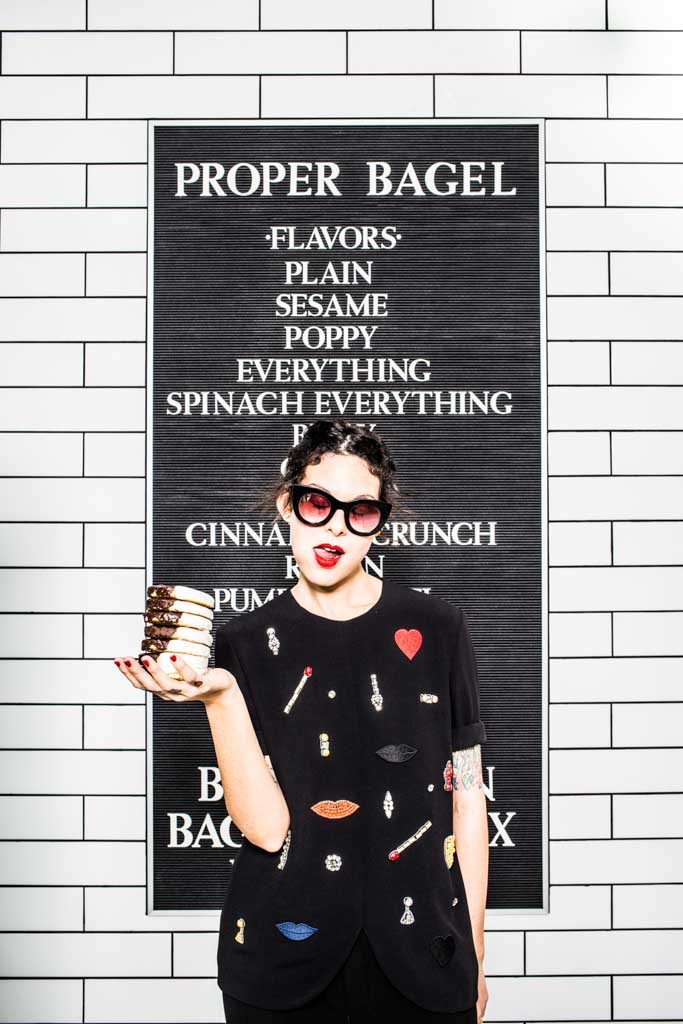 As they began work on the restaurant, they were pleasantly surprised by the support they enjoyed from business owners in town. From Ivy and Josh Elrod at Wilder (where they got their chairs) to Bryce McCloud at Isle of Printing to Andy Mumma at Barista Parlor (with whom they have an exclusive wholesale relationship) to Adam Gatchel at Southern Lights, they say the encouragement they’ve received from people here in town has been more than they’ve experienced at any of their previous locations.

“It was such an amazing thing to be involved in a community of creative people who were genuinely into what we were doing and wanted to get behind us 100 percent,” Heather says.

“The first day we opened, every single person we had done business with was in here supporting us.”

As for what’s next for Proper Bagel, the Speranza family says they plan to train a few more employees so that they can expand their hours to better serve customers. They also hope that as the community continues to become acquainted with the shop, more customers will begin buying their bagels, fish, and salads in bulk and using them as a market, which has always been a driving force behind their business.

“We’re just a family,” Heather says. “We don’t have financial investors. This is my parents’ life savings, and we’re just trying to make a living and bring a really high-quality product and experience to the people of Nashville.”