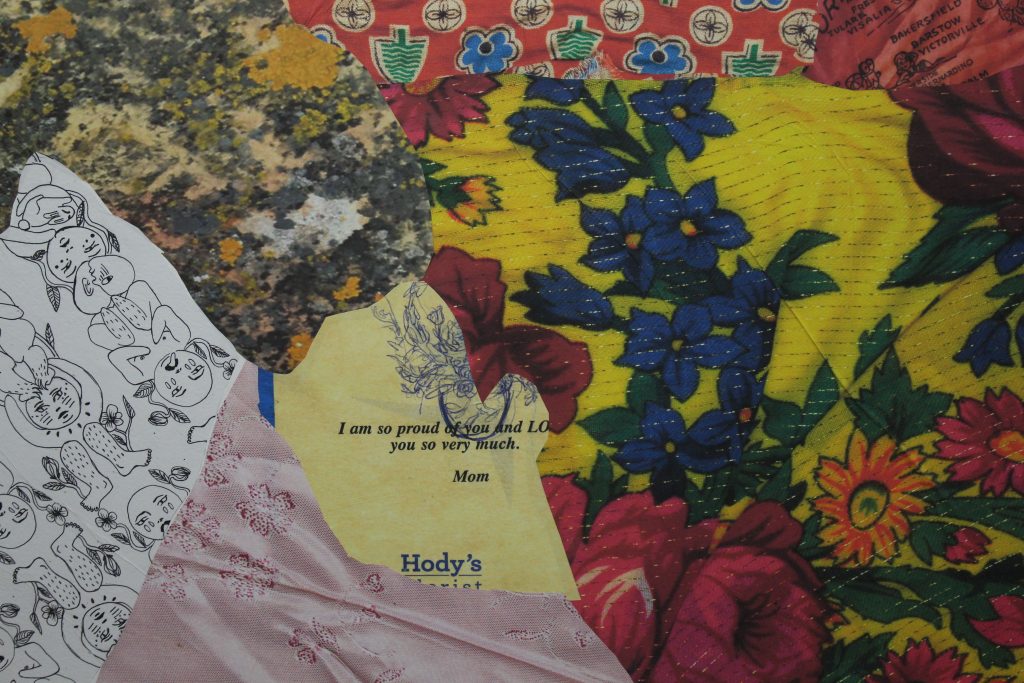 Desert Culture, the name of one of your recent shows, is also the name given to a specific time and place in early history, what draws you to this place/period?

Desert Culture defined the lifestyle of Ancient Ute people. In taking that definition and using it as my title for my thesis show, I hoped to connect an ancient time to the contemporary lifestyle of a Ute woman.

How did it inform your current body of work?

In ancient Indigenous societies, art was integrated into the act of making everyday things and art objects that were often ceremonial. For my show, I used everyday household materials such as carpet foam, carpet/wall molds, thin fabrics, flour, and sand- creating images and objects that were symbolic. I used symbolism to represent my view as a Native artist in an exploration of cultural identity, reproductive sovereignty, assertion, and protecting the land. Ultimately whatever we do, we hold positions for someone else. Passing down cultural landscapes and protecting the Native female existence are the things that motivated Desert Culture and what I believe to be the new definition of it.

What are Kachina figures, and how do they tie to your work?

Kachina’s are representations of the dead who act as messengers between humans and another world. My masks aren’t meant to be Kachinas but are influenced by being communicators between Natives and America by using exaggerated faces, but with simple features. My masks have a long list of what influences them, as I drew inspiration from the  alien masks in John Carpenter’s movie They Live, Apache headdress/ceremony, and the Ute creation story that has a mischievous coyote. I’d say the main mask that I draw is of a coyote, which represents the tricky, nostalgic, or assimilated way of a Native. A bird mask represents de-assimilation and healing. 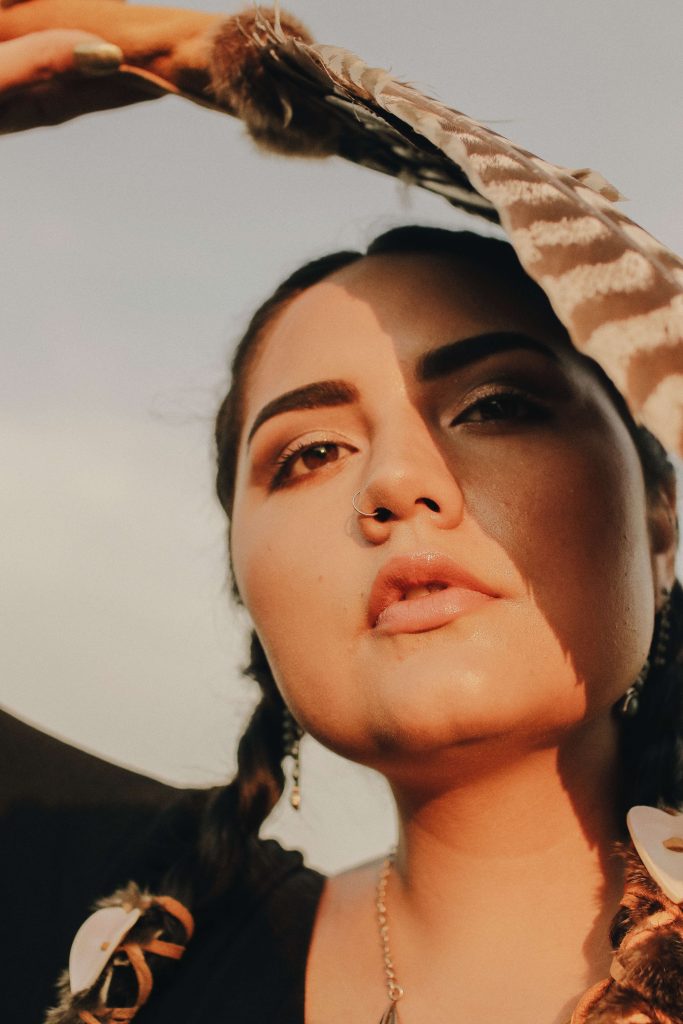 Processed with VSCO with a6 preset

Do you see any correlations between American Indian parental separation and ones we see at the southern border?

I see major connections of the separated children at the border and the boarding schools for Native children. Boarding schools were part of manifest destiny that still sought to assimilate Natives through forced religious conversion, separation from family, and complete abolishment of any Native practices.  They are one reason why a lot of Native languages, ceremonial ways, and items are destroyed. And Natives (like me), have last names such as James, Smith, etc. I highly recommend anyone interested in learning more to watch Indian Horse, directed by Stephen Campanelli. When whole generations of children get removed from their family, culture, and freedom, it causes generational trauma. And for those children (and their children’s children) they will always know that experience. I tie the term generational trauma to explain some topics I talk about in my artwork.  Such an abrupt force of change will leave generations of folks to deal with healing–America is just now seeing Native communities to heal from our trauma for instance.

Speaking of parents and carrying oral traditions on…

We noticed that you and your father got matching tats, can you tell us about that experience and how it has informed how you think about art?

My dad, speaking of having the effects of boarding school, never felt that he was very traditional in Native ways. He did not speak Ute, never danced, sang, or crafted beadwork. The tattoo that we got represents a very important lesson he taught me and continues too. Although he is not “traditional” like how most Natives get viewed, he knows how to live off the land better than most in our tribe. Isn’t that truly the most traditional way to be? The tattoo I drew is the skull of the first buffalo we hunted together and some native plants to Utah that he taught me about. He truly is the happiest away in the mountains. It informed me, as a Native, what traditions are true traditions- knowing how to take care of the land and being able to live off it. There’s no deeper and long-rooted connection.

There seems to be a recurring yellow rose in some of your work, what is its significance?

The rose (usually a red one) is the symbol/style of Ute tribe beadwork. My dad’s house has massive yellow rose bushes that bloom nearly every time I visit. So I took on that being my symbol.

You do a fair amount of mixing beadwork with modern materials, when did you start doing this?

I was frustrated in college with a significant artist block, and lack of identity haha. I felt split like I had to decide between being what I thought was an artist and what I thought being Native was, and keeping them separate. With encouragement from a few professors, I started to bead on non-traditional items like canvas, window mesh, and flour bags. I finally felt like I could express myself in all facets of who I am instead of showing a different face to each side of the coin.

How does the physicality in the practice of beading feel?

At times back-breaking, beading is a tedious, sharp, and patient craft. It takes the whole concentration of a beader- keeping track of the pattern, counting beads, alternating colors, and technique. It’s something that, with practice, most people could get but wouldn’t change the game. I think the unique beaders set a whole new level and style. Jamie Okuma, Runningfoxbeads, and Elias Jade Not Afraid all have a style that is so identifiable that you know it’s their beadwork. I aspire to be on that level. 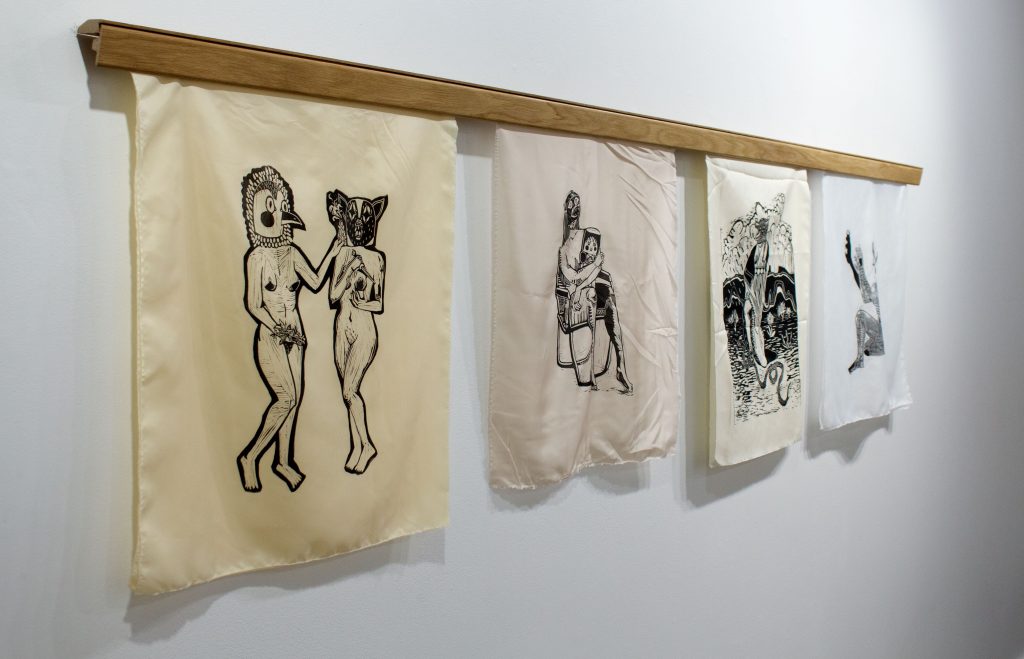 What does it feel like to walk in the path of your ancestors through utilizing traditional methods and ideas in your practice?

AMAZING. I can not express to indigenous folks to know your history. Know your family. Know your culture. It’s never too late to start representing your culture, respectively and proudly. My identity as a woman, as a Native, and as a creative began to make so much more sense. I hope everyone can experience that from wherever their heritage hails.

How does it feel to extend that path by modernizing and augmenting those same methods and ideas?

I hope I represent my experience genuinely and represent my tribes proudly. Interpreting history is difficult at times, bringing in my conversations into modern discussions I hope brings to light a lot of history that is usually forgotten or not represented. Or in some cases, how history shouldn’t get repeated. I think as long as there are people who remember it, there will be people to rebel against it.

Do you create your work with any specific viewers in mind?

I think I’ve taken the stance that my art is a teaching point of view. I hope the viewer can learn or be inclined to ask more, ask the history, influences, or meaning. 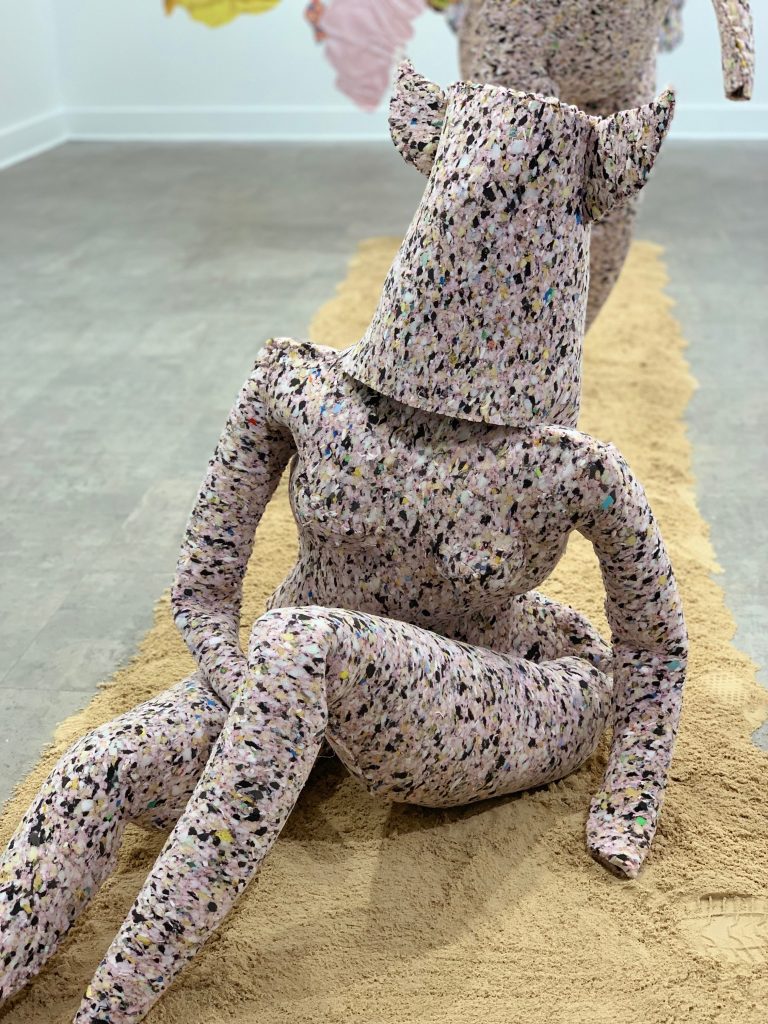 You are teaching beading workshops during The Hearts of Our People: Native Women Artists show at the Frist. What goals do you hope to accomplish through teaching and the cultural exchanges that can come with it?

My main goal is to introduce a medium that people in the south are usually not used to working with. I hope they walk away with a better appreciation of the craft and understanding of the time and love it takes to make a beadwork piece. I want people to take away that Native’s are contemporary. They are making new styles that can fit in everyday wear. And that they should support them!

What are you excited for most regarding The Hearts of Our People: Native Women Artists exhibit?

I’m excited! Because growing up as an art lover, I’ve never seen Contemporary Native Art in Museums like this. It would always be in the historical part and be hundreds of years old. And for it to be an all Native women’s show, I can’t begin to explain how proud and humbled I am to be in a time where I can witness this. I’m excited for Nashville for this exposure of very powerful representation and discussions. I feel like there isn’t this representation or history taught here or at least as much as it should be. I hope people visit and are completely shocked and take the opportunity to learn.

Why is this exhibit important?

This exhibit has been such a long time coming and has NEVER been done in the span of art history. It is contemporary Native women discussing their family, traditions, tribes, and life on a huge scale.

What are some things we should know about our current American Indian community in Nashville?

NAIA of Tennessee has their annual Powwow in October at Long Hunter. Anyone wanting to support this Non-profit, I highly recommend it. Volunteers completely run it, and they’re currently taking donations to build a cultural center as a space for the people of TN to learn about Native’s, and for Native Americans of TN to have as a resource center.

The Hearts of Our People: Native Women Artists runs  September 27, 2019–January 12 at The Frist

Keep up with Chelsea: https://www.chelseakaiah.com

For more info about NAIA check out: www.naiatn.org