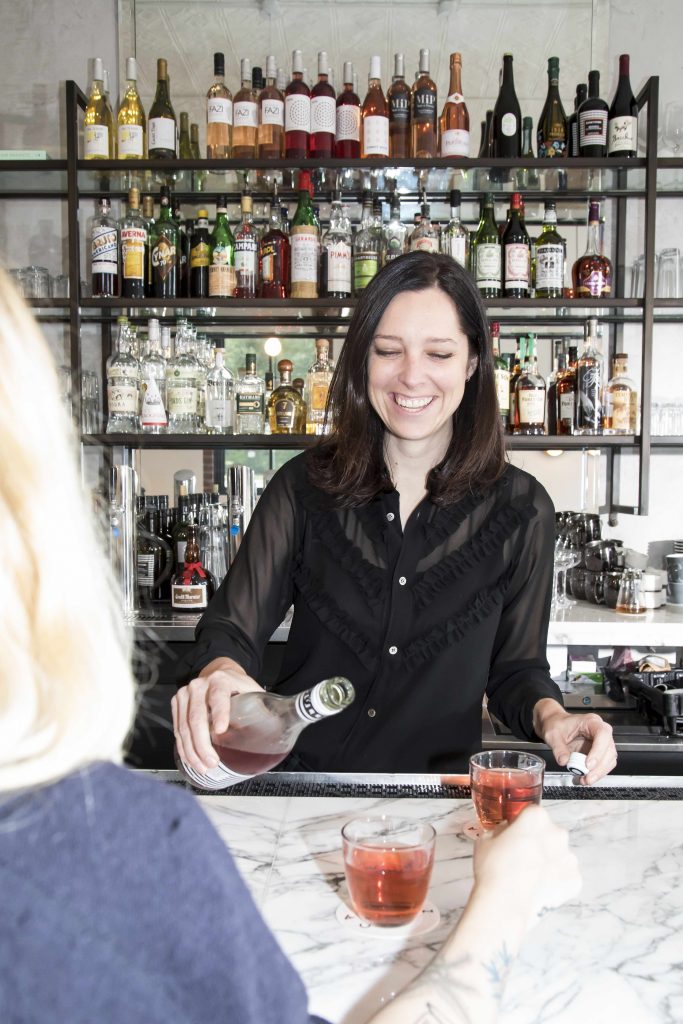 It’s the calm before dinnertime on a Tuesday evening. Owner Julia Jaksic smiles and greets me from behind a marble counter across the room. “I really like this hour where it’s just a few tables and it’s like, you can have a glass of wine and French fries or you can just have a coffee,” she says as we settle into our seats at one of the small pink tables along the wall, the day’s leftover sunlight pouring through the huge front windows. “This is one of my favorite times to be in a restaurant.”

Jaksic, who moved to Nashville from New York a year and a half ago with her husband, has spent plenty of time in them. She served as a consulting chef for American-Mediterranean bistro Jack’s Wife Freda, and she was the executive chef at Employees Only, an understated West Village nightspot where she is still a partner. Only after Jaksic moved to Nashville, where her husband had lived previously and where his parents intended to retire, did she make plans to open her own place.

“For a very, very long time in my career, I never wanted my own restaurant. I think after the consulting and going through and opening things for other people, it kind of made me realize, ‘Hey, wait a second. I should do this for myself,’” says Jaksic as she pours me a glass of water from a bottle on the table. “I always tell people, consulting was like graduate school for me.” 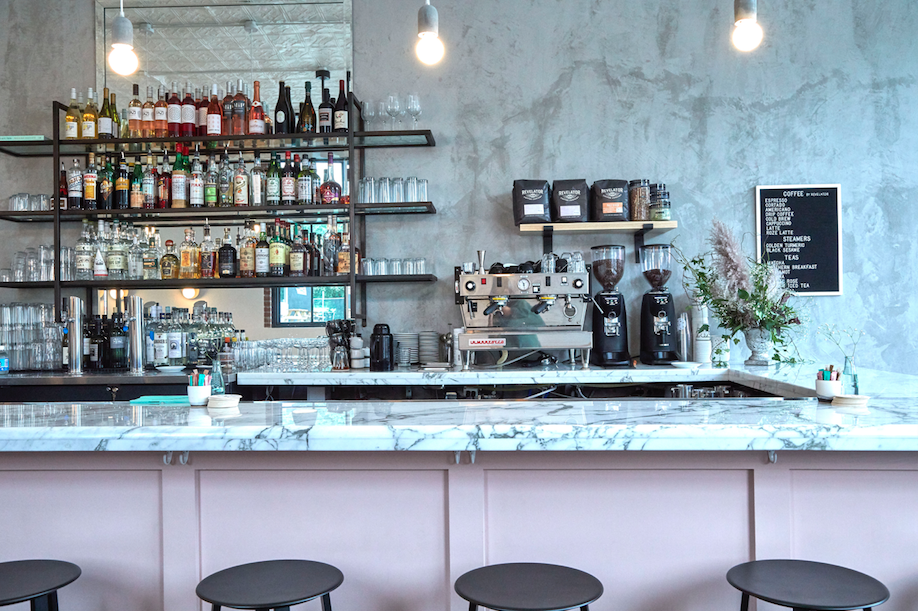 When she first relocated, Jaksic, thirty-nine, was working on projects all over the world, opening Employees Only locations in Miami and Singapore as well as helping with a friend’s restaurant in Panama. On her weeks off, she’d drive around and explore Nashville, and she often found herself at the corner of Porter Road and Greenwood Avenue, where Cafe Roze now stands. She’d looked at a few spaces to lease but hadn’t found the right one. Then in March while she was in Singapore for a business trip, she got a call from a friend that 1115 Porter Road was available. Her friend went next door to Dandelion Salon, got the phone number of the building management company, and Jaksic signed the lease from South east Asia. Three and a half months later, they were open and, Jaksic says, got busy sooner than expected.

“It took us a second to catch up to it, you know?” she says. “But we were doing the best we could, and people were super understanding. And I think that’s the hard part in New York—it’s so competitive and there’s so many places. There’s so many options when you want to go out and eat in New York . . . so you have to get it right. That’s been the biggest thing. I mean, people thank me for opening this restaurant, and I want to start crying. Just like, ‘Why are you thanking me? Thank you for showing up and being a part of this and supporting me.’”

In a city that by and large does sleep, Cafe Roze keeps long hours. The restaurant is open from 8 a.m. until midnight, serving customers who are on their way to work, heading out on the town, and everyone in between.

“I feel like New York doesn’t start until 10 a.m.,” says Jaksic. “It’s a later clock there.” Jaksic usually wouldn’t eat lunch until midafternoon, but she found that restaurants in Nashville often closed between lunch and dinner and rarely stayed open too late at night. “So when I moved here it was just like, ‘Wow, where do I go?’” She sought to fill that niche. “Don’t get me wrong—I love eating at Dino’s and Five Points,” Jaksic stresses, laughing. “I survived on those for so long. But yeah . . . it’s just a handful of places.” 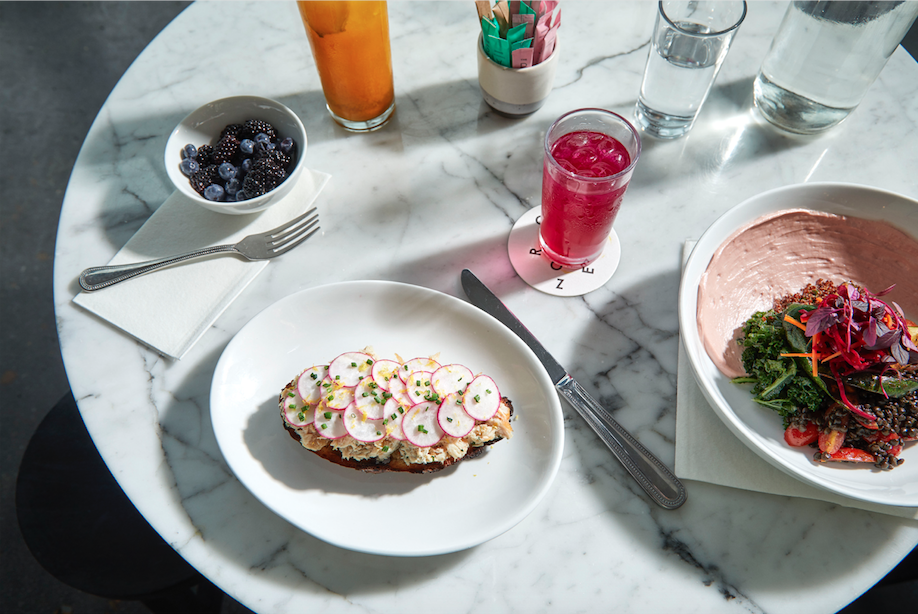 "When you know something's right, you can't just shake it off."

Jaksic was born in Milwaukee and comes by her culinary skills honestly. Her dad, who is originally from Croatia, is a butcher, and she credits her grandmother, who lived in a small village where they “grew their own everything,” with inspiring her love of food. She moved to Chicago after high school, and after a stint working for an internet service provider, she decided to enroll at Le Cordon Bleu. Her father initially balked at the idea. “[He] was a little like, ‘What are you doing with your life?’” she says. Jaksic second-guessed it herself, but she couldn’t stay out of the kitchen. “When you know something’s right, you can’t just shake it off.

”In 2000 she moved to New York, where she began collecting restaurant ideas. After moving to Nashville, she developed the concept for Cafe Roze—named for the Croatian word for pink—from an old folder of those ideas: a casual, simple dining spot that feels communal, serving as a watering hole of sorts for the neighborhood. “You can come here in your workout clothes, you can come here dressed up, you can come however,” says Jaksic. “You can feed the baby, you can do whatever, you know?”

The menu follows suit. For the first time, Jaksic found herself with total creative freedom, which resulted in a menu of dishes that is delicious by design but unfussy. “A lot of things are just things that I would make for myself at home or just things that I wanted to eat,” Jaksic says. During the day, these include a tried-and-true avocado shake with banana, kale, and bee pollen, as well as a bowl of savory oats served with a poached egg, shiitake mushrooms, mustard greens, and gomasio. Jaksic also emphasizes quality ingredients. One of the cafe’s best sellers, the country ham toast, is thinly sliced Benton’s country ham over Rolf and Daughters’ sourdough, topped with parmesan cheese.

The dinner menu features items like farro risotto with Swiss chard, spiced tomato, feta, and olives, and spring-fed rainbow trout with sugar snap pea succotash, corn broth, and pea tendrils. Both menus include a number of vegan and gluten-free options, offering something for everyone. “You can come and eat a super clean meal here, or you can come and eat a rich hangover sort of meal here,” Jaksic laughs. 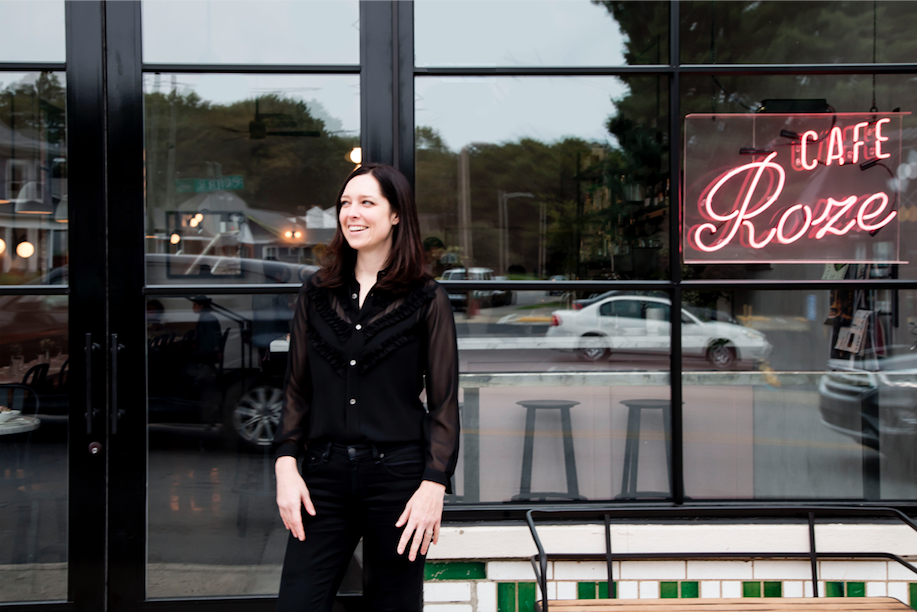 Jaksic’s approach to the decor was similarly laid-back; she decided to do the interior design herself. “It was a ton of internet searches,” she recalls. She started with a set of sleek black stools by Danish furniture company HAY and went from there, slowly filling out the space with work by local artisans—Salt Ceramics made all of the cream and sugar caddies, and Ferrin Ironworks did all of the metalwork. A gallery wall that she’ll add to over time features pieces by Molly Ledbetter, Michael di Cosola, and others. She even brought empty San Pellegrino Sanbitter bottles from home to use as vases. The result is clean and minimal but charming.

One thing Jaksic didn’t account for, though, was noise. Between a concrete wall and the tin ceiling, customers have commented on the acoustics. “Being in a musical town, everyone’s so sensitive to sound,” she says. “But that’s something—we’ll work on it.”

In fact, Jaksic is totally okay with a work in progress, allowing the restaurant to evolve as it goes, serving great food along the way. “It’s never like, ‘Okay, great, we’re cool,’” she says. “We have so much growing to do just as a space, you know? But it’s so amazing to have people that will support you while you grow, and I think that’s the takeaway for me in this.”

Jaksic says she spends most of her time at the restaurant, but she loves where she is and what she does.

“After working an eighteen-hour day, when I drive home at night I’m really happy I’m here,” she says. “It’s like, ‘Alright, I’m gonna sleep for five hours and go back and do it again tomorrow.’ Should just set up a cot upstairs, save myself a trip.”