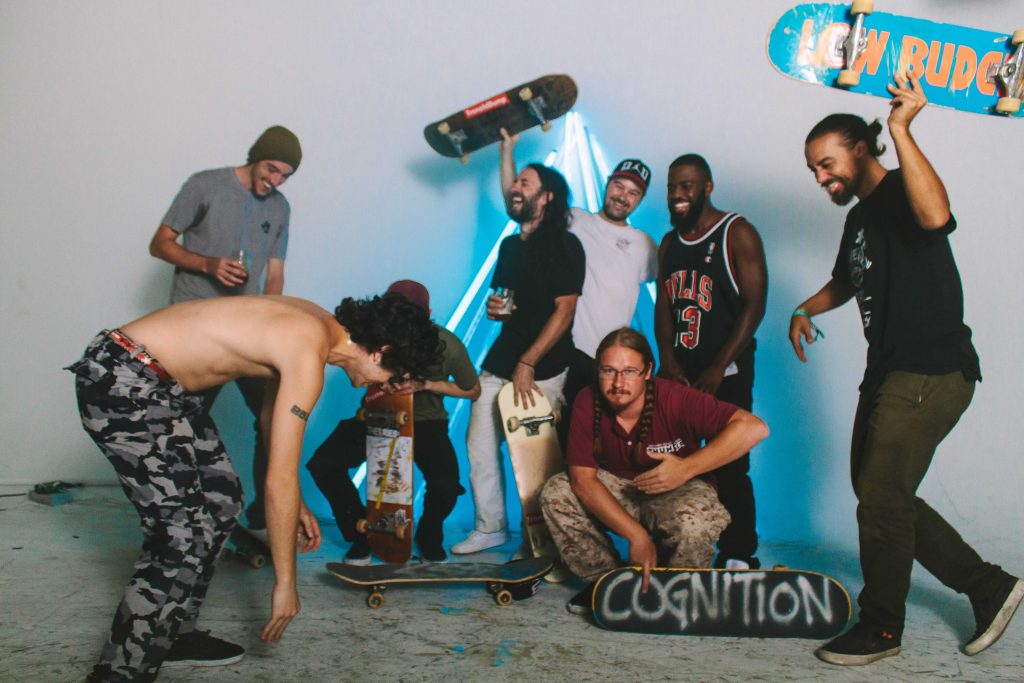 The two hours we spend drinking beer at Dino’s are accentuated by these blunt—and often startlingly self-aware— observations. Rosson, who’s built like a linebacker and braids his shoulder-length red hair into Willie Nelson braids, is the driving force behind NOLO NASHVILLE, a local website that shoots and releases Nashville skate media.

In 2015, NOLO released The Cuntry Vid, a full-length Nashville skating video that traded skate vids’ usual punk, hip-hop, and/or metal soundtracks for classic outlaw country. The video was notable not only for its unorthodox soundtrack but also for its portrayal of a skating scene that was (and is) unlike any other in the country. Rosson and NOLO provided a glimpse into a group of street skaters united and defined by their city’s scene, which has always done things a little differently.

“[Nashville skating] is more of a creative look at certain things,” says Matthew Sharer, who’s sitting across from Rosson at our Dino’s picnic table. A local artist and musician (he plays in local favorite Ranch Ghost), Sharer is something of an unofficial Nashville skate historian (my title, not his, as Sharer is incredibly modest and would never call himself that).

“That’s by no means to take away from dudes that skate another way, because I enjoy watching all of it,” he continues. “It’s like this other approach, and it’s been happening in Nashville for a long time. Even [the Nashville skate scene] back in the day was kind of a precursor to what we’re doing now.”

What is the intangible “approach” Sharer describes? And what makes Nashville skaters come back, “over and over again,” in a city where skaters belong to what is still a largely underground community? What drives the masochists? 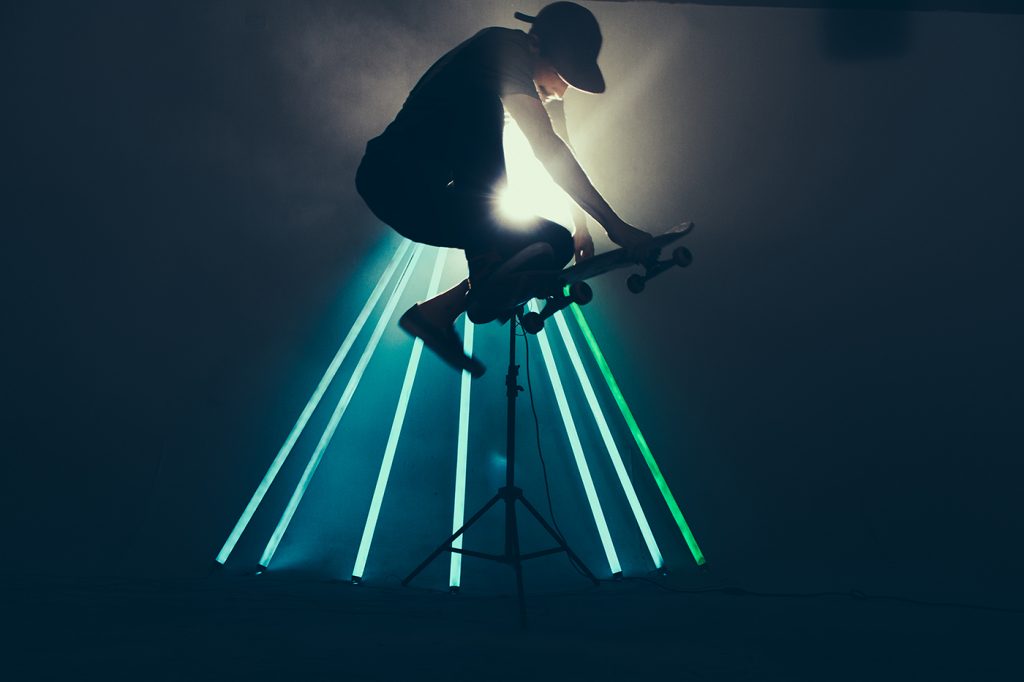 Much like our town’s music scene, understanding and respecting the history of Nashville’s skate scene is imperative to understanding its current state. It’s an extremely complex, largely oral history that’s been passed down for decades, and it could very well be the subject of its own article (or a collection of encyclopedias). Here’s a brief—and admittedly incomplete—scan of some of the major players and locations that have paved the way for today’s Nashville skaters.

Ray Underhill was the first (and arguably still most well-known) national skater to come out of Middle Tennessee. Born in 1962 in Hendersonville, Underhill was a member of legendary skate team The Bones Brigade, who were essentially the Dream Team of skateboarding. On the team, Underhill skated alongside his close friend Tony Hawk and was revered for his kindness and down-to-earth attitude. In 2008, he tragically passed after a two-year battle with a Chordoma brain tumor, but his legacy—as both a national icon and the godfather of Nashville pro skating—lives on.

Another key figure in Nashville’s storied skate history is Nathan Smith, who, unlike Underhill, was known primarily for his street skating. Smith was incredibly ahead of his time, and he reached the pinnacle of his success in 1998 when he won the famed Tampa Am competition at the Skatepark of Tampa. While the majority of Tampa Am winners have gone on to become nationally known pros, Smith—as one 2012 ESPN article cruelly stated—“disappeared into obscurity hill.” (Side note: last month, Gallatin wunderkind Jake Wooten took first place in the Tampa Am Converse Concrete Jam. Keep an eye on him, he’s obscenely talented.)

Locally, however, Smith is a god, and every one of the skaters I interview for this piece—many of whom have met Smith at some point or another—speak of him with reverence. As Sixth Avenue Skatepark Manager Nathaniel Covington puts it: “Even if you don’t really know a lot about skateboarding, you would know some of those names [Smith competed against at Tampa Am], and he blew everybody away . . . You can see him around today, he still rips hard.” Rosson’s take: “Oh my God, Nathan Smith!”

Most recently, Antioch native Dathan “Dee” Ostrander received national recognition. The now-pro started skating around town with Nashville’s F.U. Crue, and by the time he was sixteen, Baker Skateboards cofounder and owner Andrew Reynolds signed him based off the strength of his demo tape. Ostrander now has sponsorship deals with the likes of Supra and Spitfire, and the twenty-three-year-old has skated alongside Tony Hawk’s son Riley.

Despite the fact that each of these guys skated at different times, in different styles, and with different crews, they all have one thing in common: they’ve skated Legislative Plaza. 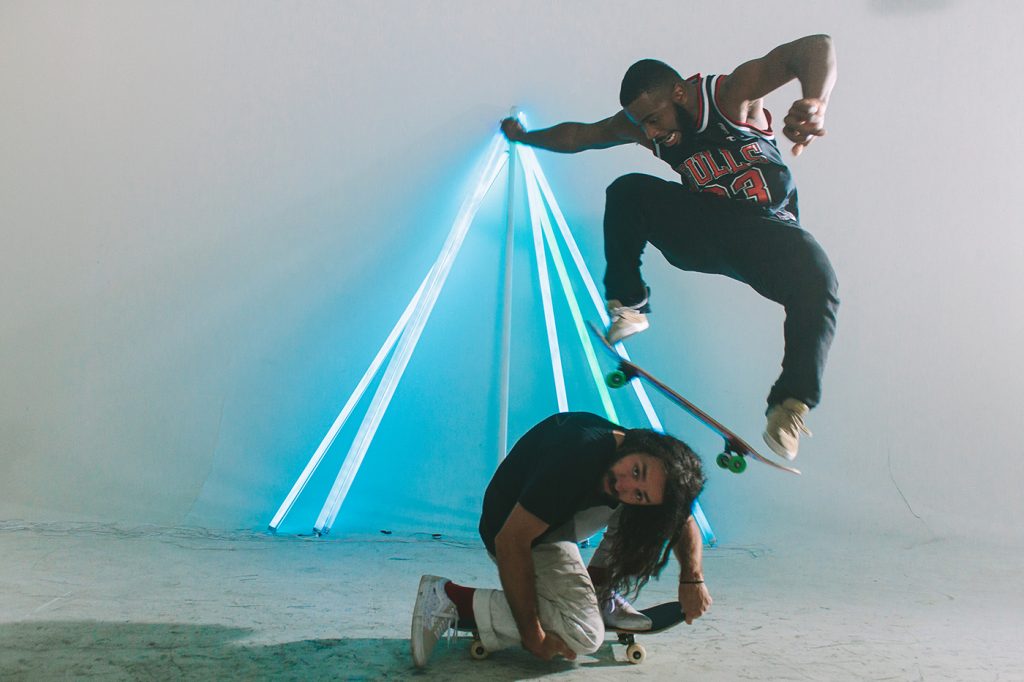 Constructed in 1925 in memory of World War I veterans, Legislative Plaza (also known as War Memorial Plaza) was a central gathering spot for political rallies and gatherings throughout the ’60s. As we noted in our NATIVE history piece on War Memorial last February, four Tennessee governors have been sworn in on the plaza steps, and Martin Luther King, John F. Kennedy, and Lyndon Johnson have all given speeches either at the auditorium or plaza. To Nashville skaters, however, Legislative is historic for different reasons.

“For the [skate] scene, the things it’s known for is Legislative, Dee [Ostrander], and then Ray Underhill being the big guy back in the day,” Covington tells me one Sunday afternoon at Hunt Supply Co. in East Nashville.

“What about Nate Smith?” says Terence Williams, who back in July helped lead Sixth Avenue’s skate team to first place in TransWorld SKATEboarding and Mountain Dew’s Dew Tour 2016 Shop Showdown. If there were a Ten Commandments of Nashville skating, “Thou Shalt Not Forget about Nathan Smith” would surely be high up on the list—right up there with “Thou Shalt Love and Respect Legislative Plaza.”

What makes Legislative such a gem is that—aside from Freedom Plaza in Washington, DC, and a handful of other locations around the country—there are hardly any spots like it in the United States. In the skating world, a good plaza is hard to come by, so Legislative attracts locals and out-of-towners alike.

“It’s spots like that that bring people into a city that they don’t even know about,” Covington continues. “City council members wouldn’t know that it’s bringing business into their city, but if someone could shed a light on that [and] turn it into more skate friendly areas . . . If Legislative somehow turned into some sort of plaza where you could skate, it would be insane.” 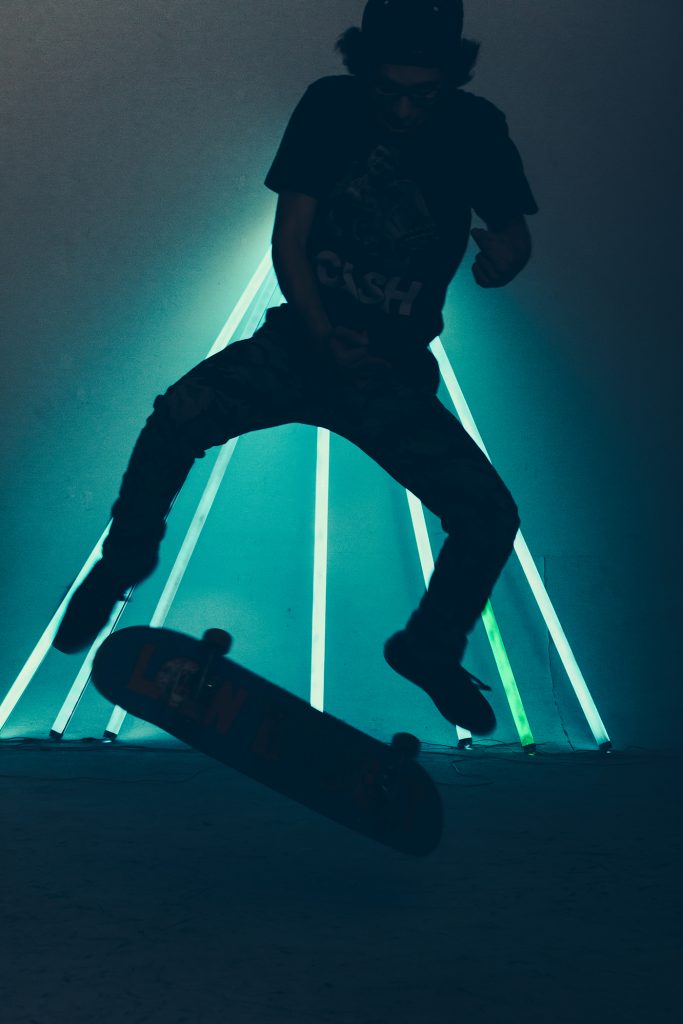 But Covington’s dream doesn’t show signs of coming true any time soon. Like most street spots, skating Legislative comes with its share of risks.

Oddly enough, the only time people could skate Legislative with impunity was during the Occupy Nashville protests. Following an ACLU-backed civil suit against Governor Haslam’s October 2011 executive order (which enacted a curfew for Occupy protesters), police interference in the plaza was temporarily decreased and the curfew was lifted. Naturally, Rosson captured it all on film. Says Matt Cole, co-owner of Low Budget Skateboards: “That was the best time in Nashville skateboarding . . . There has got to be like an hour and a half’s worth of footage from that span of time that’s all really good because you weren’t going to get kicked out in thirty minutes, so you could put the time in.”

Even though Cole and the gang can’t put that kind of time in today, Legislative is still, as Rosson puts it, “the heartbeat” of Nashville street skating. If so, it’s an irregular heartbeat. The community and inclusiveness surrounding the spot—and by proxy, the community and inclusiveness surrounding most of the Nashville skate scene—is just as unique as the setting itself.

Adam Hale, a local visual artist and a regular at Hunt Supply Co. (they even sell T-shirts bearing his designs), and Jason Hunt, the owner of the shop, both spent time in major skate hubs like San Diego. At the shop, they swap stories about Washington Street, a particularly hostile skatepark in the San Diego area.

“Back in the day, dudes would beat you up for just going there,” Hunt explains as the shop dog, Harley, howls in the background.

“I was intimidated to skate because this is their territory, you know what I mean?” Hale remembers. “They made it known. You knew when you were in Washington Street who the top dogs were. That’s just the way it was.”

Unfortunately, these incidents aren’t unique to the West Coast. Later, Williams mentions a rift between different generations in the Philadelphia scene, and Covington explains that skaters in some cities will go as far as cutting down rails—thus denying anyone who may happen upon the spot in the future the opportunity for grinding.

But in Nashville, things are different.

“I moved up here and I realized that everybody is, for the most part, really inviting and [they’ve] been solid about showing you where spots are and helping you get around. [They’re] true friends outside of skating too,” Williams explains before motioning to Hunt. “I moved out of my apartment, and he shows up in his truck and helps me move everything to another house. Comes and cuts my grass when my lawnmower gets stolen. It’s a solid community right here.”

Hunt jokes that this comes with the territory of owning a truck, but there’s truth in Williams’ comment. Even the fact that Hunt, a local shop owner, and Covington, who oversees the shop at Sixth Avenue across the river, regularly hang at each other’s businesses speaks volumes.

The community’s acceptance of outsiders—like the aforementioned out-of-towners that come to Legislative—is also rare. For instance, Williams tells me about a skater from New Orleans who happened to drive through downtown as he and some guys were having a session. In a matter of hours, he was drinking tall boys and skating the three-stair set at Legislative. “He was saying, ‘I don’t wanna leave,’” Williams recalls.

You can’t blame the guy. At both Hunt’s and Dino’s, the skaters make me—a total neophyte who hasn’t stepped on a skateboard since he was fourteen—feel like I’m in the club. Maybe that’s because, for these guys, “the club” isn’t a shop, location, or skate team; it’s a community based around shared desires and beliefs. And most notable among these is the desire to skate. It makes the injuries, the failure to land a trick, even the threat of a trespassing charge, worth it. 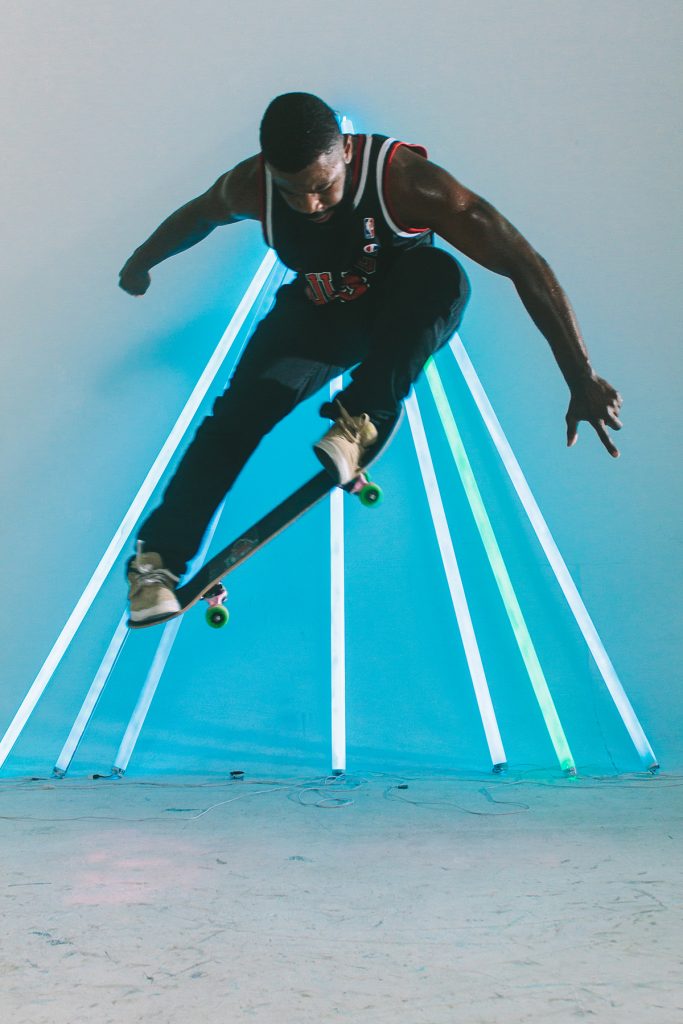 After a quick series of nods from the rest of the guys at Hunt Supply Co., Hale picks up where Williams left off.

“No matter what trick I’m doing or what it is, it kind of just recalibrates me. If I’m having an issue—a quarrel with another person, or anything like that . . . It’s one of those things where you can’t think about all the other stuff while you’re doing it, because if [you do], you’re going to hurt yourself. There is that side of it, so it literally keeps you focused. No matter what I’ve done—I go through my little process with it, and I feel like we all have our own processes—it keeps me clearheaded, and it allows me to progress in other aspects of my life.”

A bunch of masochists, indeed.