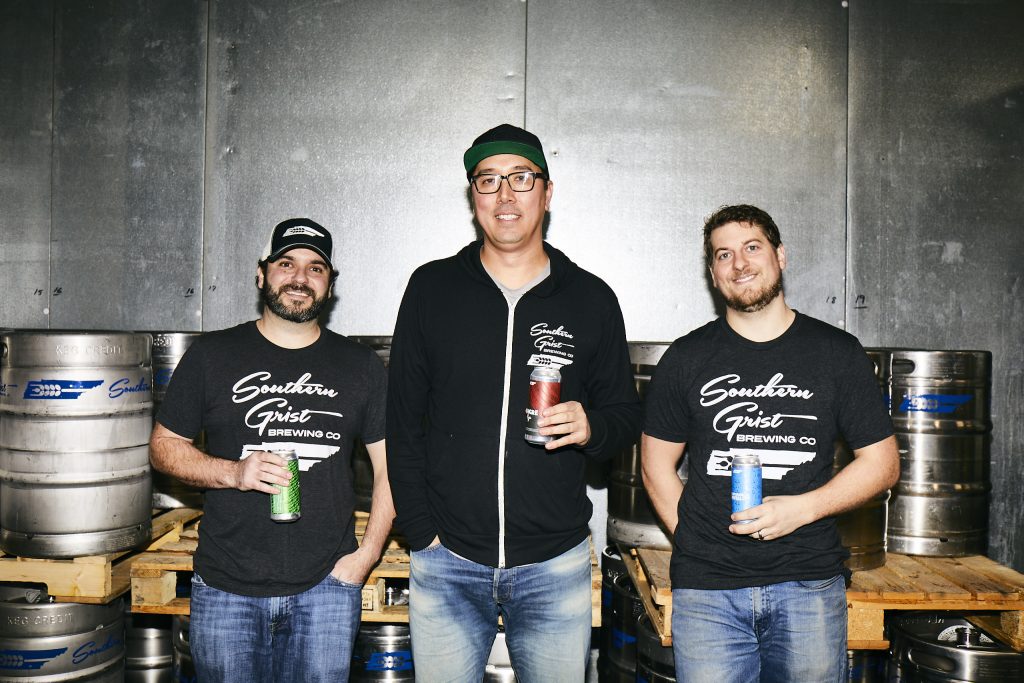 One of the first things I say to Kevin Antoon is “Oh my God.” We’re sitting across from each other at the Southern Grist Brewing Company taproom in the Nations, and I’ve just taken a sip of their Mango Upside Down Cake IPA. It’s one of the brewery’s fifteen beers currently on tap.

A lot of tropical IPAs are lucky if they have hints or notes of the fruit they’re named after, but flavor is Southern Grist’s raison d’être, and they knocked this one out of the park. The IPA is brewed with actual mango purée, which gives the beer an extra smooth consistency. Add the lactose and vanilla bean to nail down the cake flavor and aroma, and you’ve got yourself one of the best beers on tap in Nashville.

Southern Grist turns three in February. When they first opened their taproom on Porter Road in East Nashville, they had a five-year goal of opening a second location with more brew space. They exceeded their own expectations. On their second anniversary, they opened the Nations taproom, as well as the ten-thousand-square-foot warehouse next door, which is where they do their brewing.

Antoon is one of Southern Grist’s three cofounders. A transplant from San Francisco, he moved to Nashville in 2007 to help open a tech office branch for a company called ServiceSource. Antoon and fellow cofounder Jamie Lee, who also worked at ServiceSource, moved here with ten other employees to open the new location on 4th and Church. A dozen years later, that group of twelve has grown to six hundred, but it no longer includes Antoon and Lee.

The two of them worked for ServiceSource for about ten years. For the latter five, they were home brewing in Antoon’s garage, with varying levels of satisfaction.

“It wasn’t great,” Antoon says of their early batches. “But it was good enough to bring to parties and people would say, ‘Oh, this is pretty good!’” 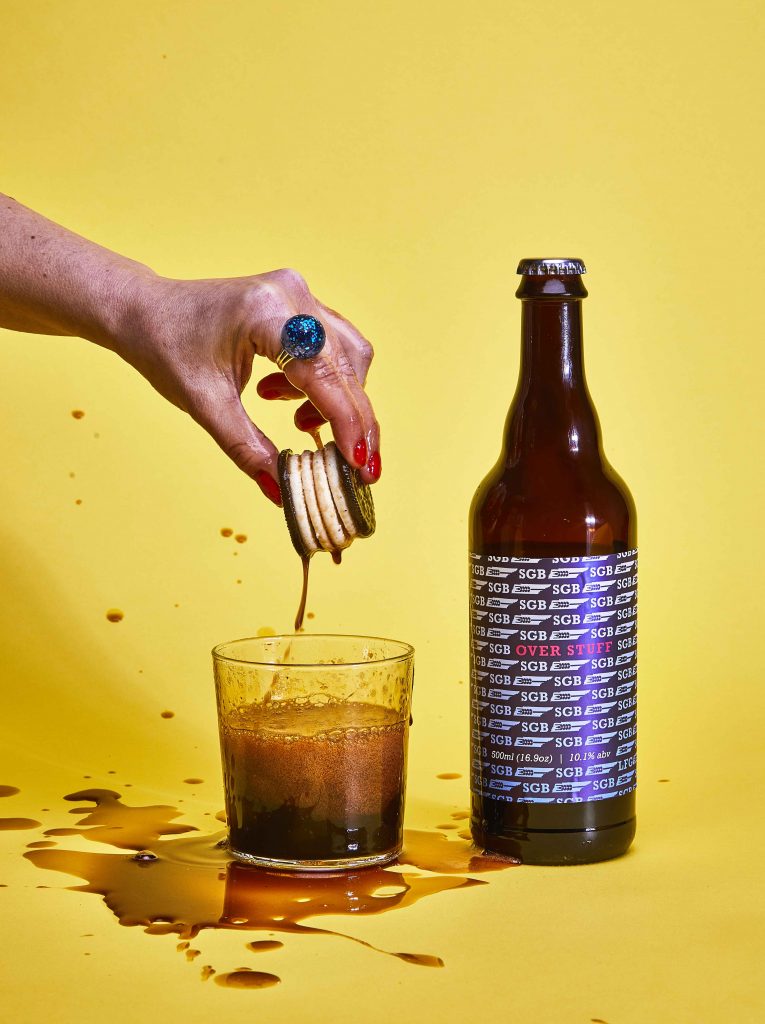 One day Antoon and Lee decided to turn their hobby into a career. But first, they needed to find a head brewer, one that wasn’t “just making pale ales and blondes,” Antoon says. Little did they know, Jared Welch was right under their noses at ServiceSource.

“We always saw [Welch] walking around the office with craft beer and peddling his home brew around the office, and one day we asked him what kind of beers he made and he just started rattling off the craziest stuff—more than any home brewer we’d met before. He was souring beers in his oven overnight and handpicking raspberries from farms to make fruited sours. I tasted a few beers and immediately knew this was our guy.”

Antoon and Lee didn’t quit their day jobs immediately (Welch did; brewing is too time consuming). For one, the ServiceSource job provided them with some security as they made their transition to brewing full time. Antoon thinks they did so in a smart way, though “some would argue it’s crazy.” For about six months, he and Lee worked at both businesses, consistently turning in twenty-hour days, hardly seeing their families. Luckily, they had support at home and at ServiceSource; it was their boss who taught them to home brew in the first place.

“It went from a hobby to a dream, and now we’re a company,” Antoon says. “We live and die by this place.”

I ask Antoon if it was daunting joining the beer scene in a city that already has over twenty breweries. The short answer, he says, is no. The Southern Grist cofounders were friendly with some of the other brewers in town before they opened, and Antoon says his biggest surprise to this day is how supportive those brewers were in helping Southern Grist get off the ground. “It’s almost a weird feeling how friendly everyone is and how helpful all the other breweries are,” he says, laughing. “And I’m not just saying that because it’s getting published.” 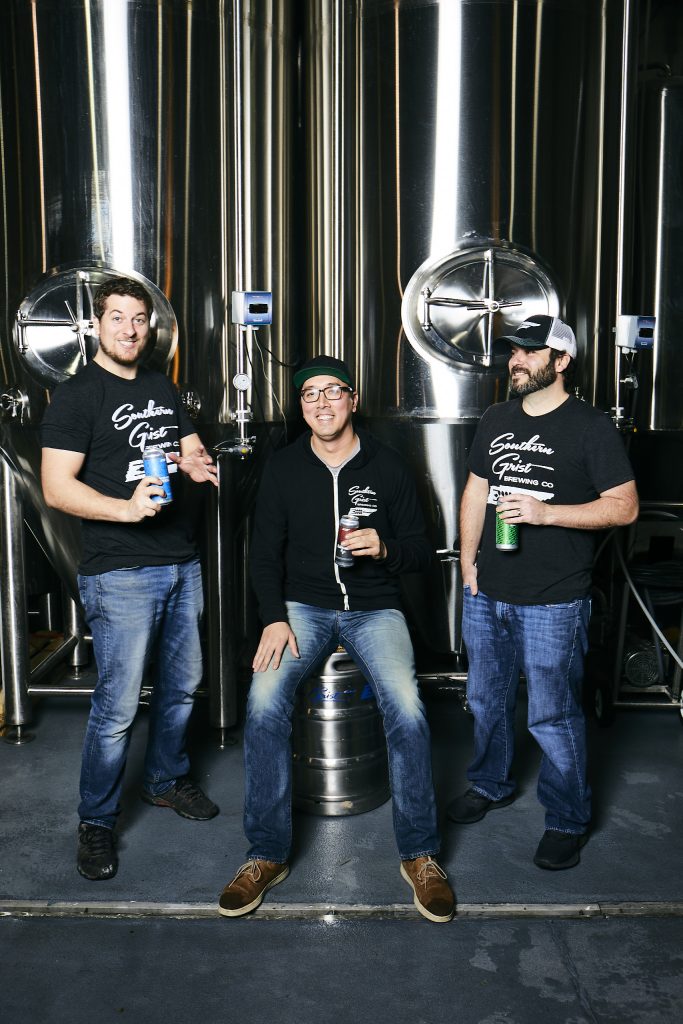 Once they were open for business, Antoon and his team made it a goal to distinguish themselves from Nashville’s other breweries, and that started with offering the most variety. If you go to Southern Grist once a month, Antoon says, the menu will be different every time.

“A lot of people like that, some don’t,” he says. “Some come in and they want their favorite pale ale on tap all year round, and that’s not our business model. We constantly want to be evolving.”

That is something Antoon carried over from his days in Silicon Valley: the ideas of paradigm shifting, “disruption,” and other buzzwords that make venture capitalists salivate. “We wanted to challenge the craft beer market in a few different ways,” he says. “But yeah, I would say it stems from disruption, always thinking about the next thing coming.”

Southern Grist’s reputation as one of Nashville’s most creative breweries has inspired a loyal following, as well as collaborations with local businesses. For beers brewed with coffee, Southern Grist only uses coffee from Barista Parlor (“[Welch] is more of a coffee snob than a beer snob,” Antoon adds). And if they’re using chocolate, it’s only ever from Olive & Sinclair. Most of the brewery’s employees—there are currently twenty-three—originated as fans, including their general manager, Brandon Cox.

Cox was born and raised in Nashville. He worked on the Nashville Sports Council, but as a home brewer, he knew he wanted to make the switch to a career in beer. An early supporter of the brewery, he often found himself at Southern Grist’s East Nashville location and eventually picked up a night or two a week as a bartender.

“The first three or four months they were open, it was the owners, the owners’ wives, brothers, sisters, in-laws,” Cox recalls. “People they could leverage to be like, ‘Hey, I need you to help come get this business started.’”

A few years in, Cox says, Southern Grist has a lot of regulars, especially at their Porter Road location.

“We’re a neighborhood bar slash brewery that just happens to make some of the best beer in the Southeast,” he says. “It kind of keeps us humble internally.” 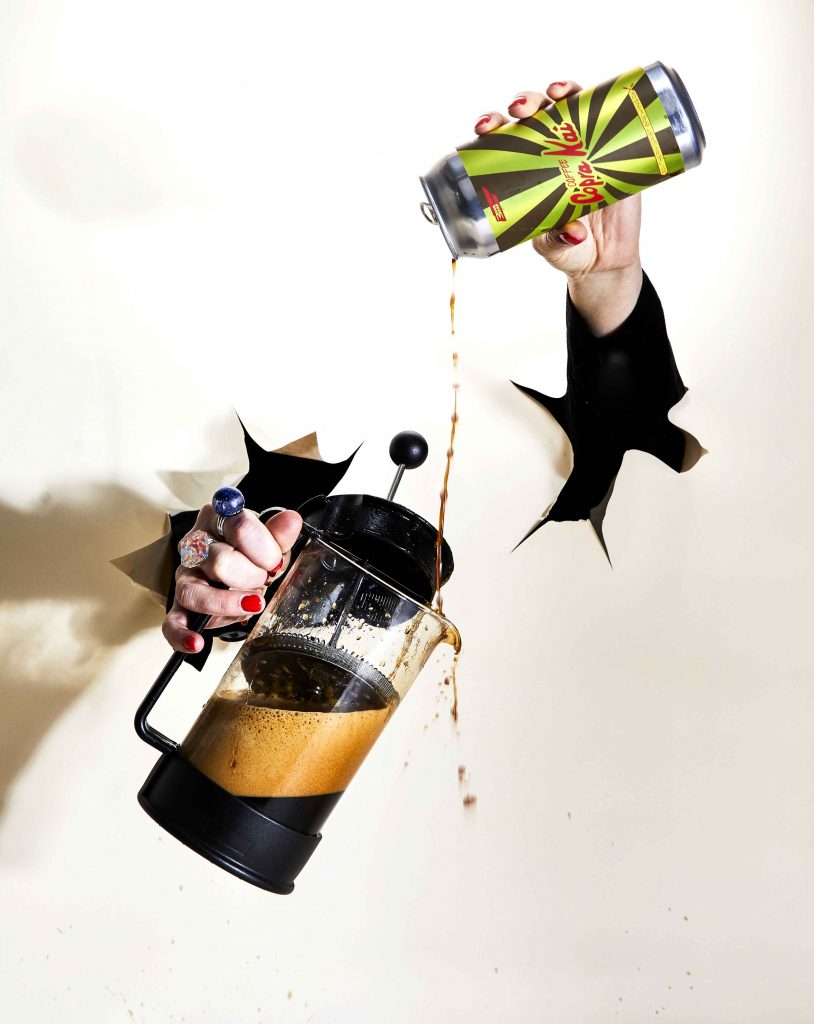 No one would blame them for not being humble—Southern Grist has established itself as one of the most acclaimed breweries in Nashville. Untappd gives them over four out of five “bottle caps.” Beer Advocate designates the brewery as “exceptional.” When Southern Grist had their monthly bottle release in January, around two hundred and fifty people lined up outside the taproom doors like it was a Supreme drop.

But it wasn’t always like this. Cox remembers when there were only a handful of breweries in the city. “I have a ton of respect for the OG people in town,” he says. “Yazoo, Blackstone, Boscos. For a long time it was just kind of those three.

“I remember when the tides really started to turn. You’d go to a place like Edley’s Barbecue and eighteen of the twenty beers on tap were some local offerings,” Cox says. “That’s wild, because you didn’t get that five-plus years ago. Maybe if you were lucky you’d find Guinness or Sam Adams. It’s almost the opposite now, like where can I get a Guinness on draft?!”

Looking at the range of flavors on tap, it’s easy to imagine the brewers at Southern Grist as a bunch of frat bros dumping whatever they can find in their dorm into a Gatorade cooler and calling it craft beer. I mean, they did once brew a beer called Marbits that used eighty thousand cereal marshmallows. Antoon says it’s not that simple.

“A lot of people think we just want to get as crazy as possible, but it’s more calculated than that,” he says. “It’s constantly, maniacally tinkering with the ingredients to make sure we have something for every palate that comes through the door.”

And trust me, they do. Over the course of a week, I tried seven different Southern Grist beers, including Antoon’s current favorite, a super crisp, hazy double IPA called Process Control. I generally prefer citrusy IPAs, but a pleasant surprise is Chop It Up, a rich brown ale with hazelnuts, toasted coconut, and cacao nibs. Another standout was the Neapolitan Complex, an imperial that tastes like its namesake ice cream. Then, for fans of sours—and wine—there’s the Sangre Roja, which was brewed in collaboration with Southern Prohibition Brewing. It’s a sangria-inspired sour ale made with old vine Zinfandel must.

Of course, all these recommendations are probably for naught. By the time you read this and go to one of the taprooms, there will be fifteen new options waiting for you. And then you’ll have an “Oh my God” moment of your own. 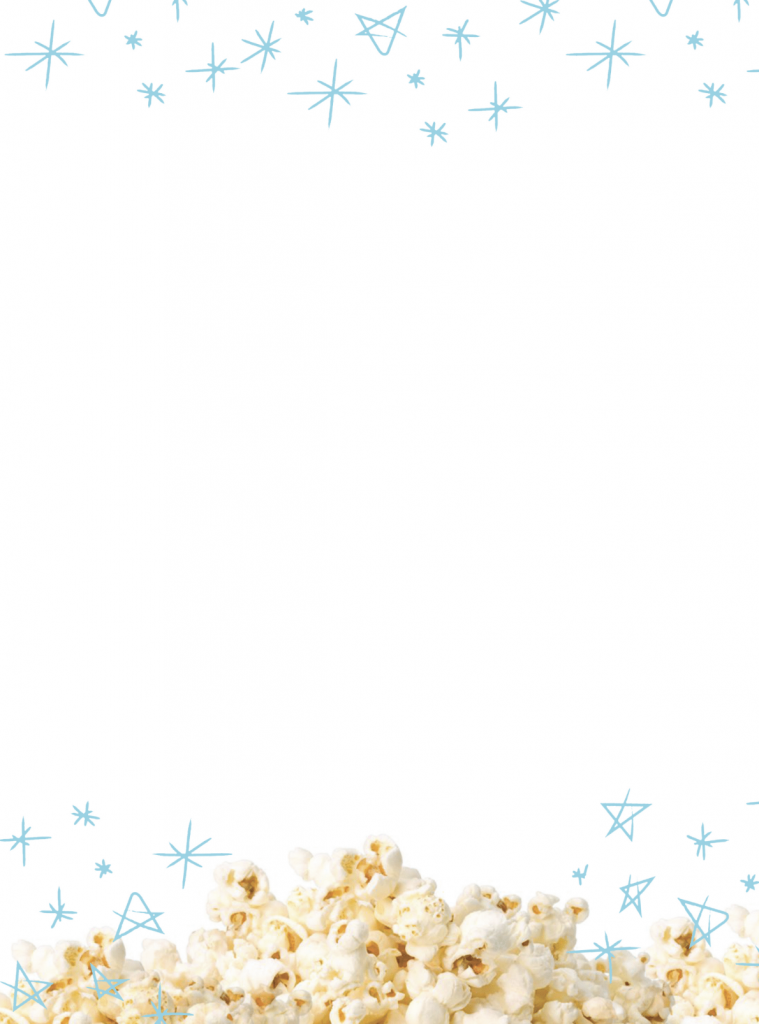 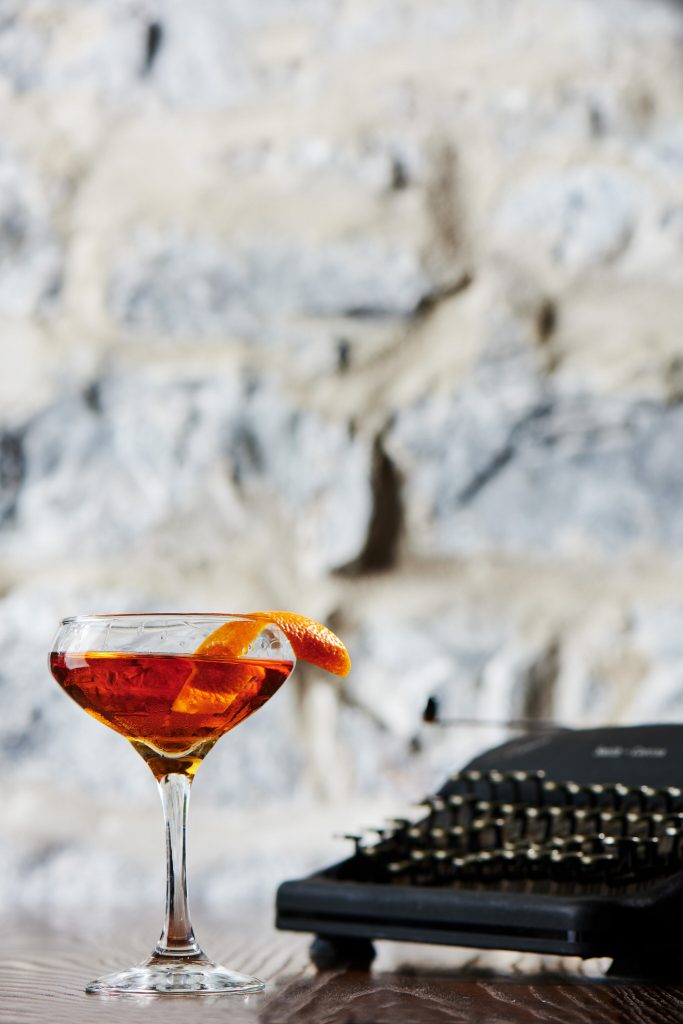