“You don’t wanna know what’s in that river.”

“That river,” of course, is the Cumberland, the waterway that runs through the heart of our city. Once the lifeblood of Kentucky and Middle and North Tennessee commerce, the river has, in more recent decades, developed a not-so-good reputation. As Chip Cathey, the owner of now-defunct Stand Up Paddleboard Music City, told me in a 2013 interview: “When I tell people I paddle in the Cumberland River, they act like I have a third eye or something.”

Though organizations like the Cumberland River Compact have made great strides to clean up the Cumberland, and though you’re likely to see folks like Cathey paddling around downtown these days, the fact remains: anything could be floating down the Cumberland. 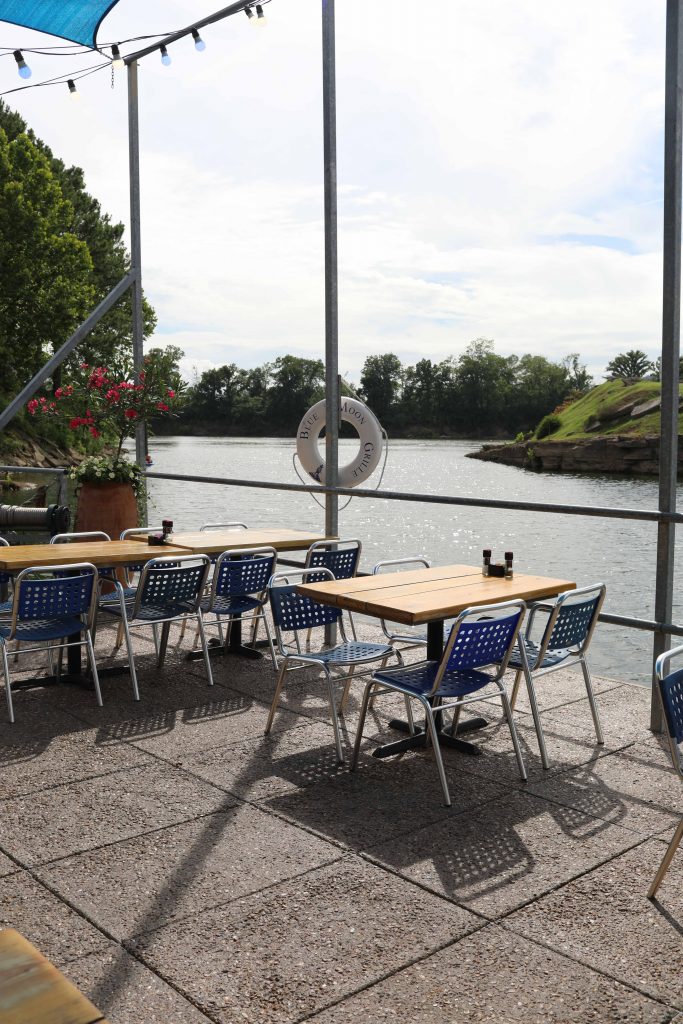 That’s certainly the case today, as Dougie Ray Smith and I watch a police boat dock at Rock Harbor, a marina hidden in plain sight on the west side of the Cumberland, just past The Nations.

Does that mean what I think it means?

I get an affirmative nod and knowing raised eyebrow. Then a microsecond of reflection before Smith buzzes back to the kitchen—something he does at least ten times over the course of our afternoon together.

It’s not that Smith is insensitive. He’s just really busy. “I was away for two days,” he tells me. “And when you do that, the whole world misaligns.”

But it’s not just the busyness. There’s also the fact that Smith has seen plenty of weird stuff float down this river—including the marina restaurant we’re currently sitting in. During the 2010 flood, the Blue Moon Lagoon, which had been a westside gem for more than a decade, literally washed away. “They found [it] on a bank down by the river,” Smith explains.

Shortly after, Rock Harbor owner Fred Nance and his son, Craig, rebuilt the marina and adjacent restaurant space. Along with Noshville owner Tom Loventhal, and—as Smith puts it—a “baker’s dozen” of other partners, the Nances made plans for a new iteration of Blue Moon. One of those partners was Glenn Smith, Dougie Ray’s “big brother in the industry” (but not his actual big brother) and former owner of beloved White Bridge Road tropical bar Rainbow Key. Glenn tapped Dougie Ray to build out the interior and run the place. After some remodeling and a few false starts, the Blue Moon Grille was born. 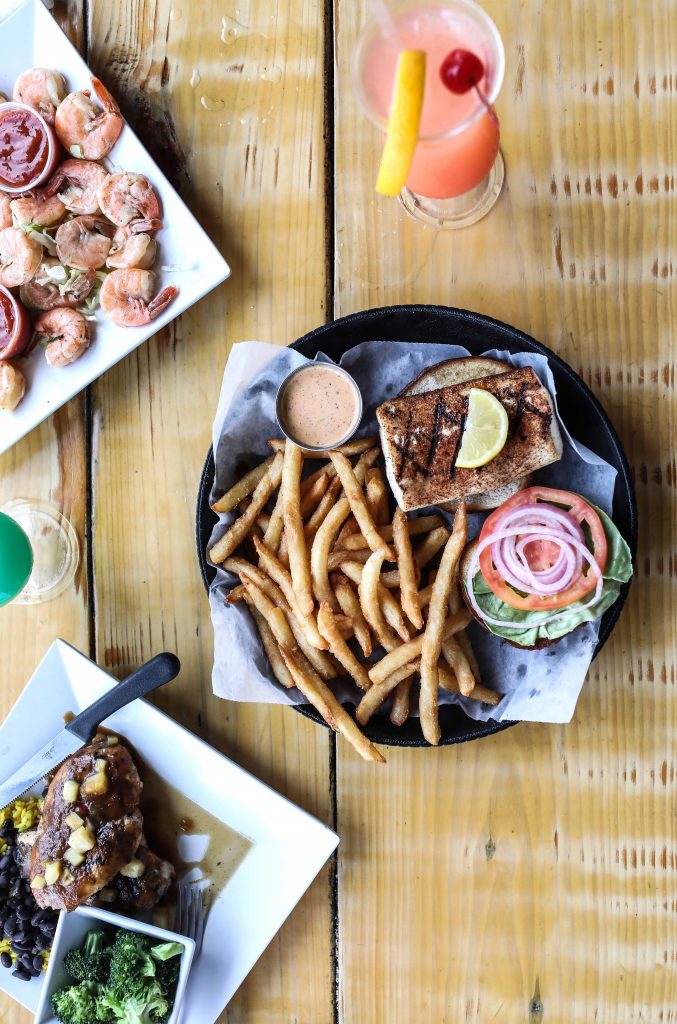 For all intents and purposes, this is why I’m sitting here, eating jerk chicken (it’s Rainbow Key’s lauded original recipe, by the way, falls right off the bone) and talking to Dougie Ray Smith. But like most Nashville haunts—the ones that are owned and operated by people who’ve lived and worked here their whole lives—what makes Blue Moon is personality.

Sure, the Blue Moon itself, with its rock wall fountain, views of the Cumberland (punctuated by beautifully tacky houseboats), and blackened mahi sandwich, is charming. I can imagine an Instagram post in which it’s described as “vibey.” As Smith says: “It’s a jewel—a little diamond in the rough, you know? It doesn’t seem like Nashville around here. More like San Diego to me.”

But the personality I’m talking about doesn’t come from coconut shrimp or neon-green umbrella drinks (though those don’t hurt). It comes from people. There’s no Santa’s without Santa; no Rotier’s without Charlie Rotier; and there’s no Blue Moon without Dougie Ray Smith. 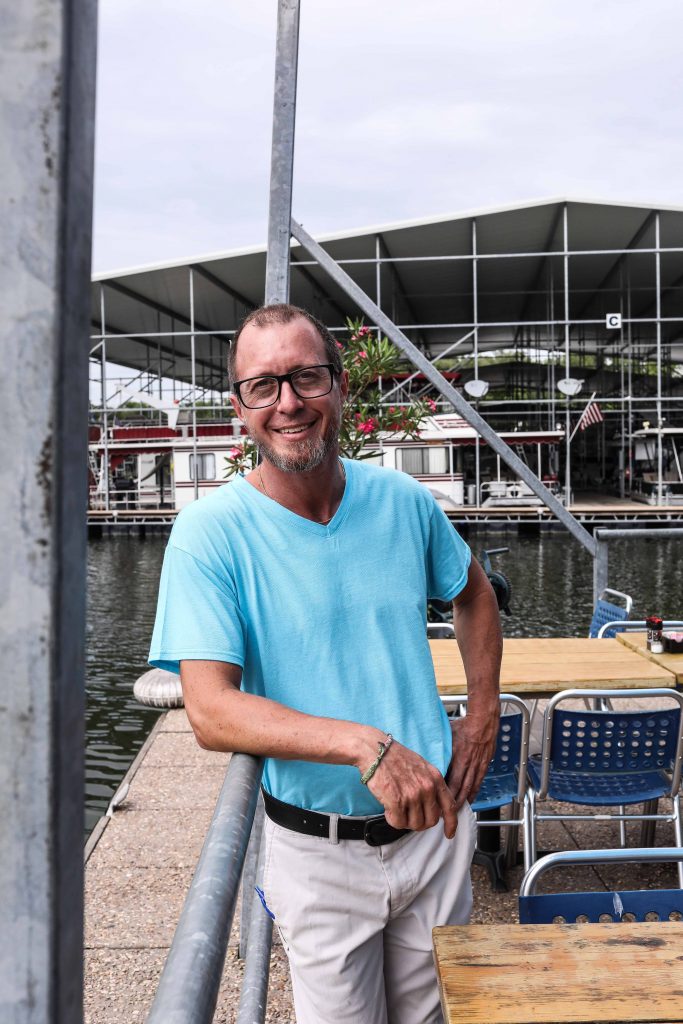 Smith was born in 1970 in Nashville, where his father started Smith Brothers Car Wash (a chain that’s still active today). Though he worked in the family business as a kid—Smith guesses they’ve washed “tens of millions” of cars since opening—he always wanted something more.

“Just had that feeling,” he says. “Like you should be doing something. I started selling candy at school, ‘til I think my tenth grade year. Then the principal told me I better quit or I’d get expelled . . . I’ve always been that way—whatever it takes.”

Case in point: At fifteen, Smith doctored his birth certificate so he could get a job as a fryer at Burger King (“White-out, magic marker, Sharpie, and photocopy—it was that easy!”). At seventeen, that same forged government document got him gigs waiting tables around town. He landed at Rainbow Key, where his future mentor and “big brother” Glenn Smith promptly hired and fired him. “I was spraying my girlfriend down in the service well for arguing during the rush,” he sighs. Dougie Ray wouldn’t see Smith for another twenty-four years, when Smith asked him to open Blue Moon. 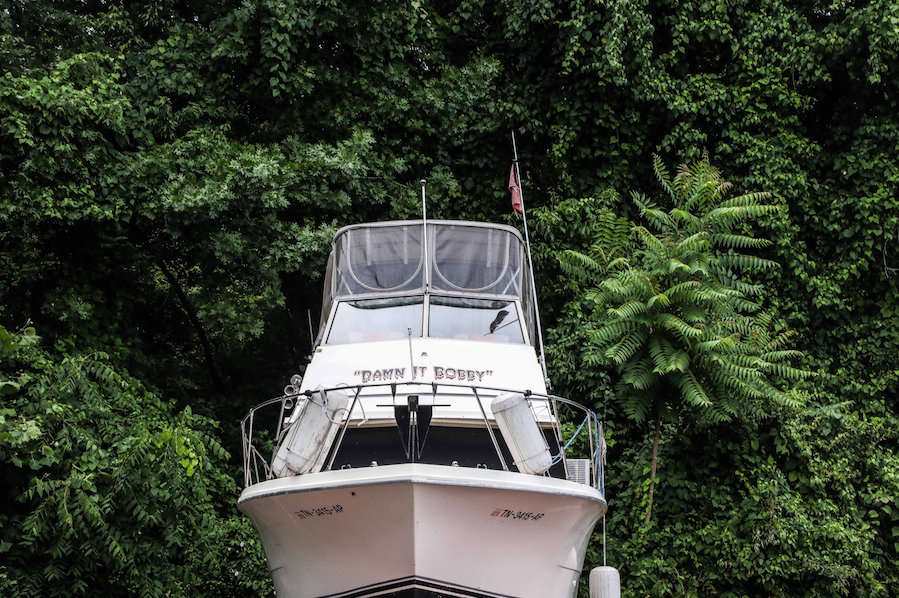 So what did Dougie Ray do in that twenty-four-year interim? Well, a little bit of everything. He fell in love, moved to California, fell out of love (“she said step up or step out”), and came back to Nashville. He sold pool table accounts to bars, worked at Flying Saucer, and eventually opened Dougie Ray’s, a Rivergate billiards bar that served Tex-Mex and showed sports. The name was appropriate, as it was not only Smith’s bar but also his makeshift home.

“I had just bitten off more than I could chew, and I had to chew it,” Smith remembers. “I went 212 days without a day off. They were all sixteen- to eighteen-hour days, working seven months without a break—and that’s literally without a break. I had a shower, I slept on the couch, and I locked the door.”

In the back office or something, right?

“Right on the stage! I built the place to where you push the wall, and this little door opened up. You could go under the steps, and I hammer-drilled a platform and [put in] a bed, so I could sleep out of the eye of the customer. So if I could sleep for twenty minutes during the day, I’d go get it, and the customers couldn’t see me.”

After three years of living like a Rivergate vampire, Smith saved up enough money to buy the property. Then he sold his own bar. Then, when the folks that bought it went out of business, he bought it back again. Then he sold it again. Actually, Smith ended up selling Dougie Ray’s a total of four times.

“I’m a custodian of it, okay?” he explains. “It’s like a garden: I rip out all the weeds, then the flowers and plants take care of themselves, basically. It flourishes, and then I hand it over so I have better time management in life . . . And then they let the weeds grow over.”

During this period, Smith also pursued other entrepreneurial ventures—or as he calls it, “squirrelin’ around and hustlin’.” He renovated a chain of Motel 6s, dabbled in real estate (he’s still a licensed agent), and helped a few local bars and restaurants get off the ground. At one of those bars, Hermitage’s JB’s Pour House, he had an unexpected guest.

“Two servers didn’t show, and I was waiting tables that morning,” Smith remembers. “And when I laid down a napkin in front of Glenn Smith, I didn’t recognize him. I said, ‘How are you doing today, sir?’ He said, ‘I’m good—I’m good, Doug.’”

Glenn had come specifically to offer Dougie Ray the gig at Blue Moon, but the future GM dismissed him. “I remember saying, ‘Never say that to me again. What can I get you to drink?’” Glenn was persistent, though, and Dougie’s initial reservations (he thought he was too busy for the job—too much squirrelin’ and hustlin’) were squashed within a couple of months. Along with Chef David Billings, the duo built the Blue Moon into the place we’re dining in this afternoon. 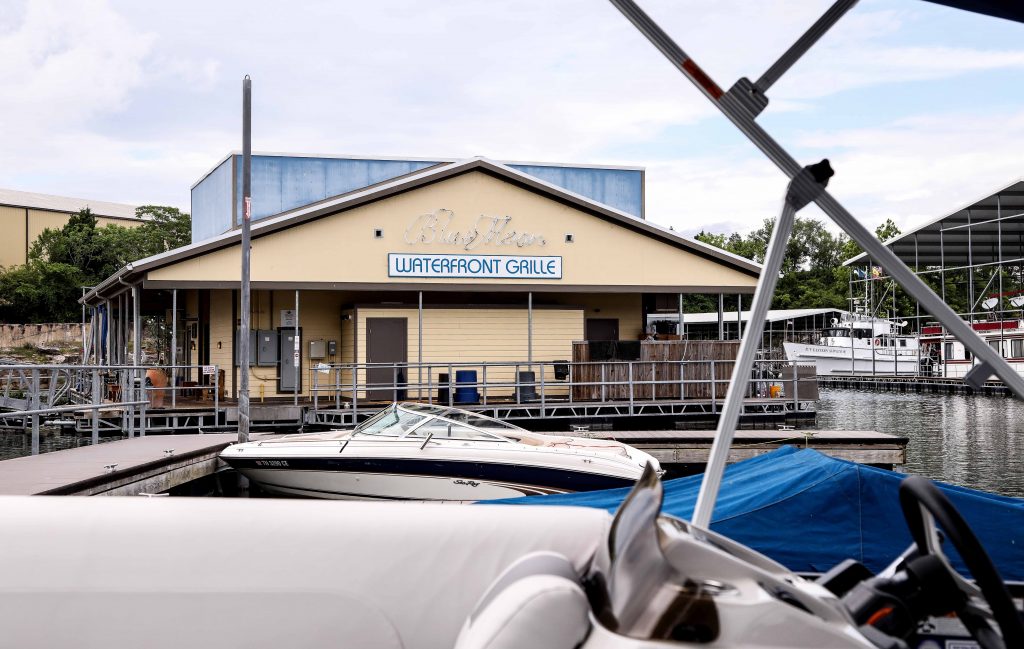 Today, Dougie Ray says his work in the restaurant industry is “about 25 percent of my income, but it’s 90 percent of my stress. And 100 percent of my social life.” When he’s not down at Blue Moon or working in real estate, he’s out in Charlotte, Tennessee, without a phone or computer, building his dream house in the middle of the woods: “I drew a house on a napkin, and I’ve been building one to two days a week for three years.”

But no matter how many side projects Smith takes on, he says there’s one hustle that trumps them all. “My favorite job is being a dad,” he tells me. “I’m a single father to three little girls: Bella, Pearl, and Rose. PBR—tell me I’m not a bar guy!”

Herein lies the duality of Dougie Ray Smith. Yes, the dude is a self-proclaimed hustler, and yes, he gets a Saul Goodman-y gleam in his eye while recounting past schemes. But all the hustles are—at least as far as I can tell—above board, and more importantly, they’re all for his girls.

Past the tall tales (we spend a long time talking about the four times he’s escaped death), the off-kilter humor (“I stopped drinking water once I learned fish have sex in it”), and no-bullshit work persona (when I ask how many people work at Blue Moon, he says, “about 30 percent”) there’s a man who makes an honest living doing work he takes pride in.

“I just care. It’s pride of craft, right?” Smith begins. “[If] you’re going to turn your hard-earned money over to me, I better care. I better try . . . It could be the biggest restaurant or a hot dog stand—it kind of takes on the vibe or character of the guy who’s running it, right?”

So what’s the character of Blue Moon? Well, you’re not going to hear phrases like “deconstructed” or “our play on” at this restaurant. You also won’t have to google what’s on the menu, or pretend like you “get” the appetizer that looks more like a terrarium than a mixed greens salad.

What you will get is hot food, cold beer, and strong drinks—served with a smile and enjoyed in an environment that feels a little removed from day-to-day life in this city. Things move a little slower, feel a little older on this side of the Cumberland. It’s a place to relax and forget about what’s going on downstream, where all that hustle and bustle is happening. It’s a place with personality.

Believe me, you do want to know what’s in that river when it comes to Blue Moon.