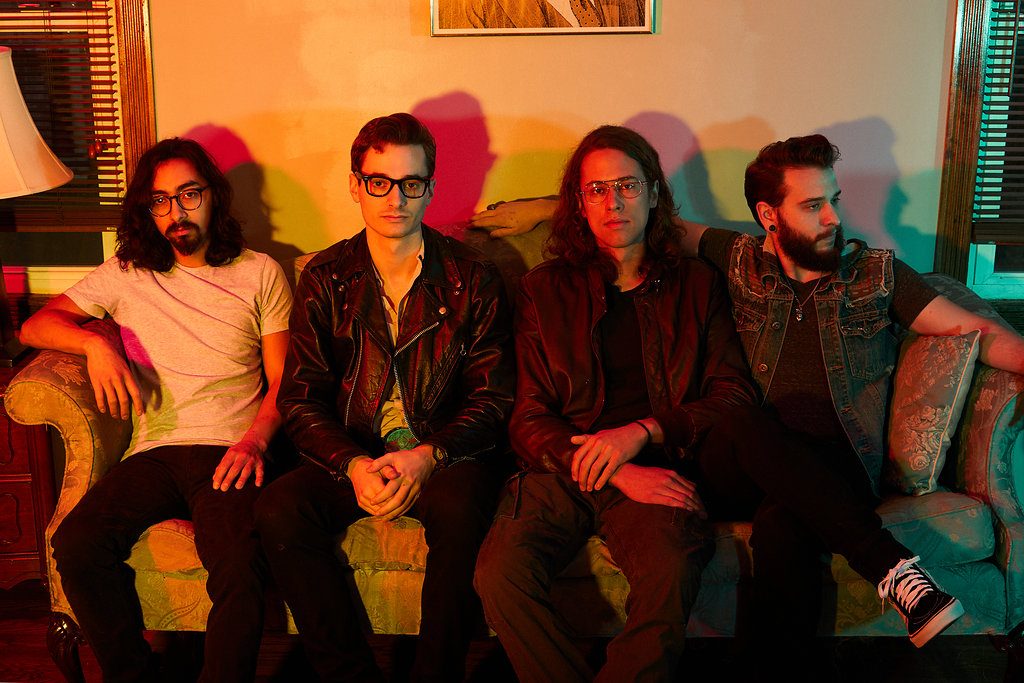 IT’S TORNADO WEATHER THE DAY I MEET DEDSA. I show up early and catch the tail end of their rehearsal, what I can hear of it—the drums a house or two down, a synth line along with the beat at the end of their driveway. As I walk up it’s easy connecting faint synth riffs and drums to “Dream About Fish” or the fast driving fuzz to “Dinner Bell,” both songs from their forthcoming full-length, Salmon Velocity.

It’s Saturday. Their street is a typical East Nashville blend of old and new, with redone houses beside beat cottages and eventual teardowns. A few houses down a Buick is up on two-by-fours instead of jack stands. It’s dark and warm for December. DEDSA’s music sits perfectly here, even muted by the house. Their songs are memorable and, like most good art, pull your own memories out into the open. “I want to disappear into the way things used to be,” Stephen DeWitt hollers in “Annihilation,” conjuring a futuristic nostalgia that’s woven throughout the eleven-song album set to come out March 3, following a release at Mercy Lounge on March 2.

They finish right on time and let me inside the house. We go downstairs.

“This place used to be a casino,” drummer Grant Bramlett says as DeWitt pushes open a trap door and we duck inside a hidden room off the basement. 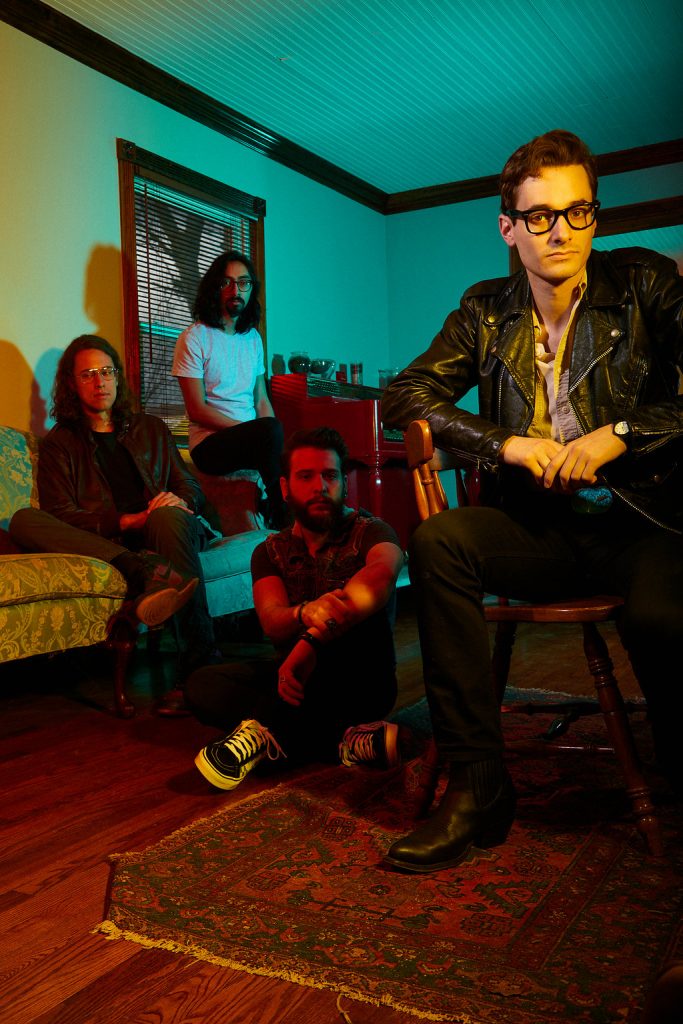 Before the two sets of longtime friends that comprise the band moved in together and set up the DEDSA house, their neighbors recall seeing slot machines being dollied away. There must have been a bust. Something happened. They’re told the ceilings used to be mirrors. There were probably poker tables, craps tables, maybe.

Our eyes adjust to the dark. Dewitt leads. He’s tall and lean in jeans and black boots. His head is just shy of the unpainted sheetrock ceiling. It’s easy to imagine mirrors, gold or silver marbled, reflecting people slipping in and out, gambling. Bramlett sways in the doorway in a cutoff denim jacket, jeans, Vans; he’s comfortable, chewing a toothpick. We turn into a smaller, darker space that used to be the band’s control room. “Until water started leaking in,” Dewitt says.

To record Salmon Velocity, their first true LP, the band installed a mixing board and additional studio gear in DeWitt’s downstairs bedroom, which shares a wall with a rehearsal space where the other two band members, Ben Carreon and Robbie Ward, are tinkering with their gear in preparation to play a few songs from the electronic rock sprawler.

DeWitt and Bramlett explain how the extra room was described in the rental listing: wine cellar. There was even a “dinky wine rack” in one of the corners, DeWitt recalls. There are other rumors about the place, too, among them that it used to be a funeral home. This again from neighbors. “It’s all hearsay,” DeWitt makes sure to clarify. 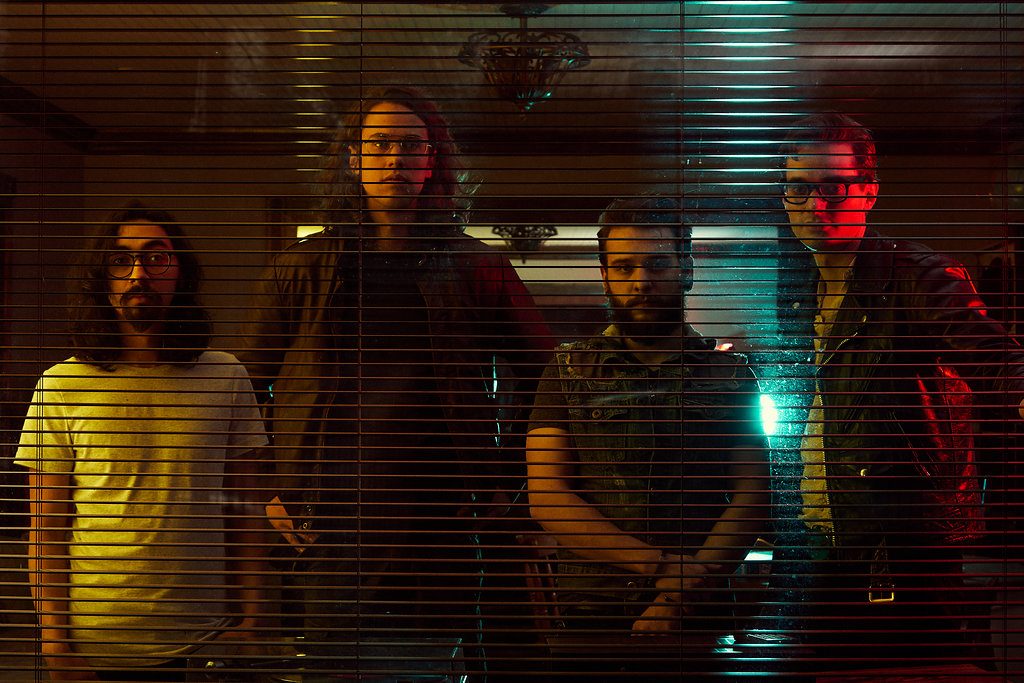 Today, between the recording studio downstairs and keyboardist/illustrator/ filmmaker Ward’s animation studio upstairs, the surprisingly clean, post-college- age house is devoted to a different gamble. The large, red brick house is a kind of Noah’s Ark if you sub boat with space shuttle and are hoping to establish a world of cats and dogs and artists.

After a tour of the studio and another set of songs, the band circles up inside the dimly lit control room and makes conversation with a symbiotic ease that speaks of an accumulation of life together. While Bramlett and DeWitt were sneaking out of the house in high school to play “sketchy” shows in Birmingham, Carreon and Ward were conducting their own experiments with music and rudimentary animation projects in Colorado.

“It was all kind of tied together,” DeWitt says of the work that eventually evolved into the spastic and roving songs and accompanying visuals for Salmon Velocity. “We’d make movies and make noise in the garage that eventually became what got us through high school.”

Now the twentysomethings self-produce it all, the music and the Monty Python-inspired animations. Their first, most fully realized music video came a few summers back when they released “Lighter Click,” a synth-glitch and groove song that features a near-six-minute video that, to date, has reached more than eighty thousand views. “It’s an unconscious thing,” Ward says, regarding their influences and process. “Grant might have some jazz thing that he brings to the table, and I might throw in Yes or Black Sabbath or Animal Collective.”

“WE’D MAKE MOVIES AND MAKE NOISE IN THE GARAGE THAT EVENTUALLY BECAME WHAT GOT US THROUGH HIGH SCHOOL.”

Though they’re generally inspired by the local scene and musicians who drive them to “push harder,” they admit they’re an odd fit in Nashville. “Naturally we’re kind of outsiders in our own scene because we just kind of have our own worlds,” DeWitt says. “We would have made the same record in Antarctica,” he adds when I later press the band on how the city has impacted their work.

Really, DEDSA is DEDSA. Their prog dream world of synths and classic rock riffs, the colorful and comedic post-apocalyptic imagery, the mythology—it’s all generated from a shared consciousness, a “library,” Ward calls it, that’s made up of music and film and the result of the guys spending so much time together. They grew up on jazz and rock, house and prog, and they can talk academically about bands ranging from Black Sabbath to the New York Dolls to The Hives. There’s even a deep love of cartoons in Ward’s case and an appreciation of that love among his bandmates.

“Cartoons?” I circle back.

“Robbie was raised on all the classic cartoons,” Dewitt says of the lead synthesizer player, the “Jimmy Page of keyboards,” DeWitt calls him. “Robbie’s a Looney Tunes scholar.”

Ward, a less-angular, David Fricke-type in metal frame glasses and a brown leather jacket, thinks on it and says, “Yeah, I think a lot about cartoons when I’m trying to come up with something on the synthesizer.” 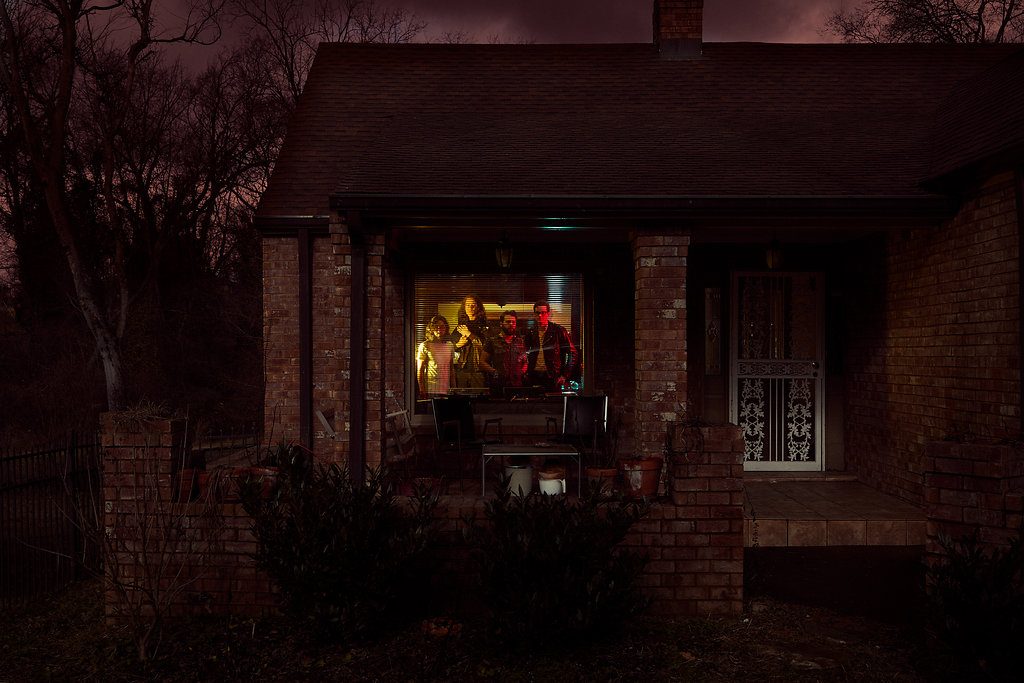 At ages nineteen and twenty, Dewitt and Ward, who started the band, found themselves essentially homeless in Nashville. They’d moved to town a few weeks apart and within months were broke and mostly alone but driven to play music.

“We realized later that we’d both gone through this really tumultuous time where we totally unmoored,” Ward says of the time the two struggled to establish themselves.

After staying in his girlfriend’s Watkins dorm room, DeWitt wound up in his car. “I slept in my Miata, across the center console. I parked it behind a rock pile behind the dorms.”

One of those nights Dewitt called Ward from his Miata, trying to land a better place to crash, only to find out Ward was possibly worse off.

“I was very, very sick [that night],” Ward says. “I was basically living in the bathtub because I was in so much pain.”

“We were kids dealing with big problems for the first time,” DeWitt says and recalls another night driving as far outside of town as he could for a cheaper room and spending sixty dollars at a hotel that booted him at nine the next morning. “It was shitty. It was like ten dollars an hour.”

“I’ve never thought I could do anything else,” Ward says. “It never crossed my mind, even when I was totally out of money and my friends had left me out here. . .”

“No,” Ward says immediately. “If you know what you want to do, you should just do it.” 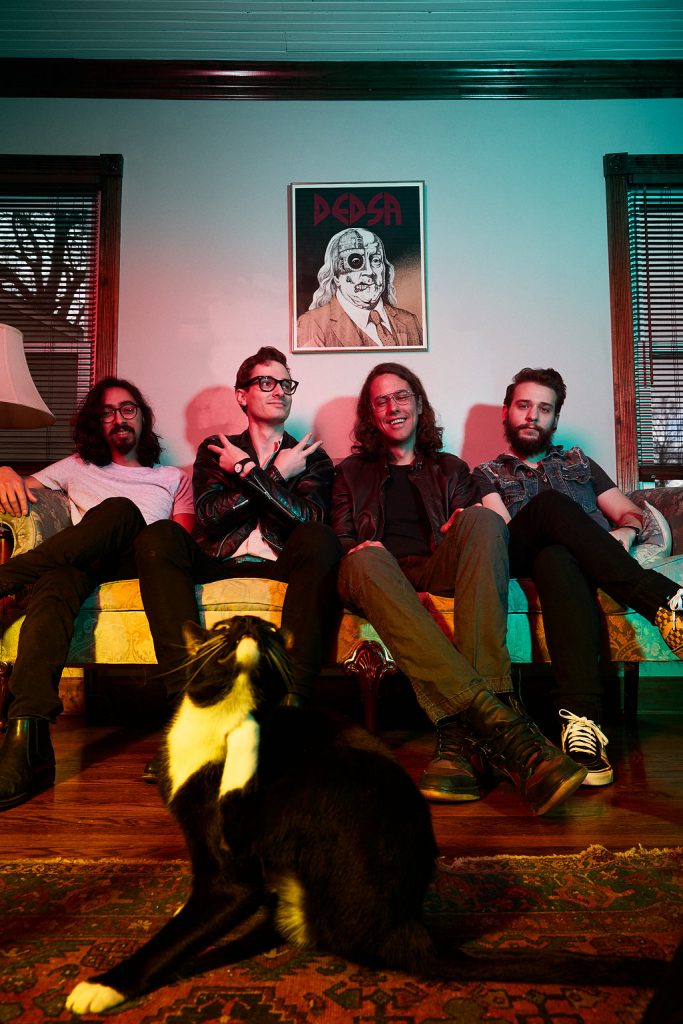 It’s still light outside, but grayer than before. We keep ending our conversation, DeWitt and Bramlett and I, only to pick back up again with ideas like installing in-ground trampolines in the backyard. Then there’s the story of Bramlett digging a fire pit in the yard by hand. We stand and talk and look at the neighborhood, all wet and stripped, waiting for winter.

We’ve just watched the video for “Annihilation,” which Ward labored on for nearly a year and will be released this month. Taking Terry Gilliam’s lead, Ward did it all by hand. Colored pencils, large sheets of paper under museum glass, a camera, and a focused, regimented life, all resulting in something human that cuts through so much of what’s out there—“the noise,” Ward calls it.

“Even if they don’t really know that it’s handmade, you feel it. There are smudges on the grass,” Ward says.

It’s Dante’s Inferno meets Monty Python. It’s about the end or an end. A journey and a dark hope, and it lingers in the backyard, cast out over the neighborhood where everything is heavy and saturated.

“I wonder what the world is coming to . . . should I just drift along?” DeWitt asks in the song.

“What is the world coming to?” I ask.

“At the risk of sounding like an idiot cynic, society is kind of a joke, right?” DeWitt says. Bramlett laughs in agreement.

“That’s safe to say at the end of this year,” Ward adds.

“And what can you do?” DeWitt asks rhetorically.

Build another world the way DEDSA has.

Bramlett gets a text from his mother warning him about a storm. It is catastrophe weather, but we all have somewhere to be.