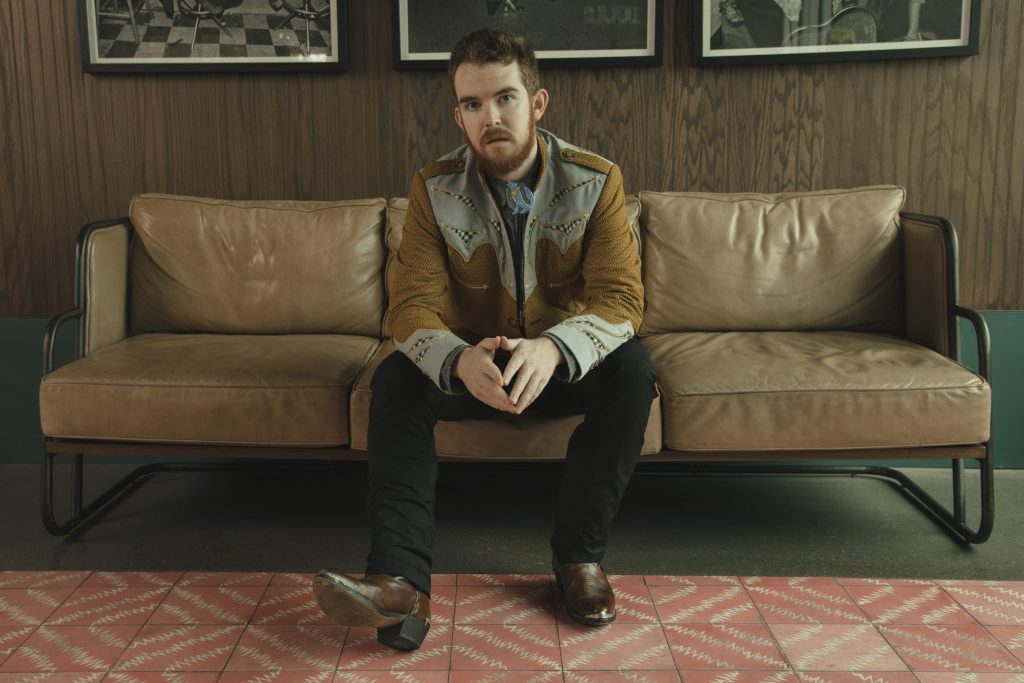 “The key is to be Bruce Lee. You have to be like water.”

Justin Donahue, who performs under the name Jung Youth, talks through his freestyle method. He’s sitting on a red sofa, reclined a bit. He uncrosses his legs and leans forward with a bright white smile. “Don’t think too much.” His eyes get wide. “It’s like speaking in tongues.” He pauses for a moment. He laughs at his own seriousness.

Donahue is five foot seven with deep red hair. He’s all smiles. He talks with both hands. When standing, he bobs and weaves like a boxer. His eyes move around the room in an attempt to connect with everyone. He’s charming and quick-witted.

Donahue grew up in Louisville, Kentucky. His family was deeply religious. From as early as he can recall, he was singing in the choir, sitting in a pew, or listening to religious music in the grade school car pool. He went to Friday fish frys. His fingers were crossed for a win at cakewalk fundraisers. “I wanted to be a priest,” Donahue pauses, “until I got into hip-hop.”

The change happened over time. Donahue was a rock ‘n’ roll sinner, morally corrupted by the Internet and MTV first. He started out on Britney Spears and NSYNC, then he discovered rock ‘n’ roll with Jimi Hendrix. Songwriting appeared through James Taylor. He loved the creative friction between JAY-Z and Nas. “But country was my jam,” Donahue laughs. “John Anderson’s ‘Seminole Wind’ was my number-one jam.”

Louisville’s local music scene leaned toward hardcore and alternative music. Donahue recalls seeing ska bands at the nearby Baptist church and metal at the legion hall—he even watched someone make a molotov cocktail during a Chevelle set at a makeshift outdoor festival.

With these influences, Donahue’s singing turned from the Catholic church choir to his own emo band, The Issues. “We were talking about the issues of the world,” Donahue says, admitting the earnestness of the music might have been religiously motivated. “We were a high school, politically motivated, emo band.” Donahue filled notebooks with poetry but didn’t write the lyrics for their original songs.

The Issues, who became Micawber (named for the character Wilkins Micawber in David Copperfield) played parties and cover shows on Bardstown Road in Louisville. For a high school kid, playing in bars made for good stories at school, but Donahue was getting tired of singing other people’s songs.

As the band was winding down, he started getting into freestyle rap. “My buddy Basil, a skateboarding graffiti artist, hooked me up with Fruity Loops, and we were making beats.” Donahue felt like he could create something more interesting than what he was hearing from his own band and in pop music. But he was only at the beginning of his venture into hip-hop.

He enrolled at the University of Kentucky in Lexington, where he worked toward dual degrees in Integrated Strategic Communications and Spanish. He joined a fraternity and freestyled at parties (mostly to impress women), but he didn’t take music seriously. “I needed to be responsible,” he explains. “I was planning on a career in marketing, but I was still working on poetry, stream-of-consciousness writing, and freestyling.”

By his sophomore year, Donahue had earned the opportunity to study abroad. He transferred to the University of Valencia in Spain with the goal of completing his Spanish degree. “I didn’t know anyone in Spain,” he said. “On the way there, I had a layover in Philadelphia. I saw a guy reading a book about Spain at the international gate.” Donahue introduced himself to Robbie Link. “Turned out, he was from Louisville and I knew his mom from church,” Donahue shakes his head. “He and I became best friends.” 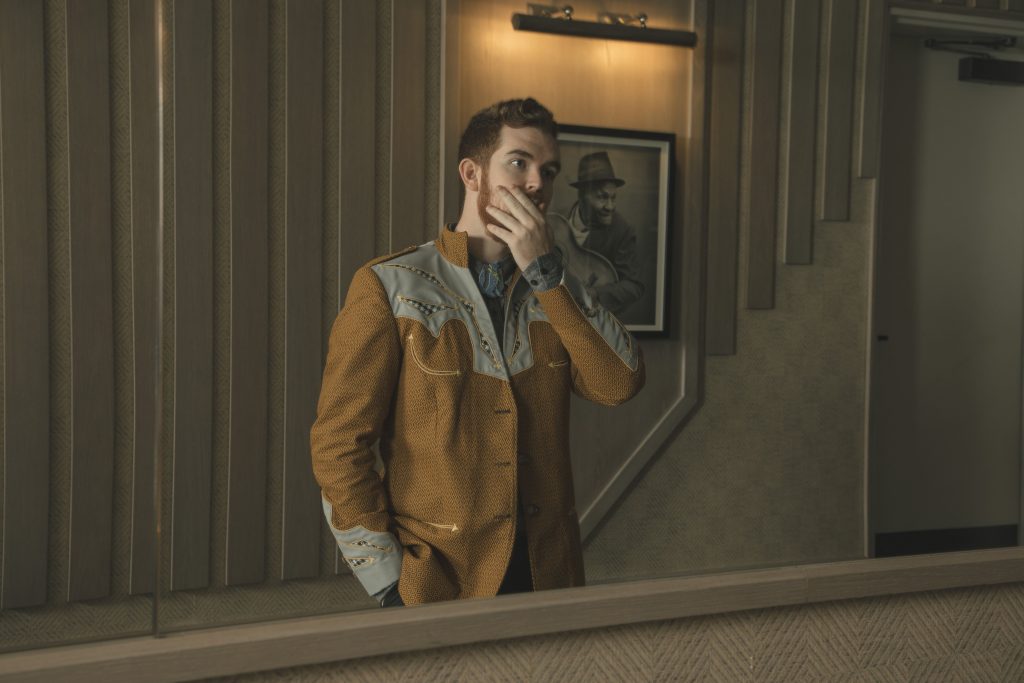 In Spain, Link encouraged Donahue’s love of hip-hop. On the thirty-minute walks from the bar to their apartments, they would freestyle. Link would call out to groups of women, “Hey ladies, check this out!” and Donahue would rap. “He’d gas me up and I’d go,” Donahue says.

Returning to the States, Donahue took an internship in New York City. He reconnected with Link and they shared an apartment with Link’s brother. During the forty-five-minute train rides to and from work, Donahue wrote raps. He continued going to parties and rapped over the music.

Back at college for his senior year, his life revolved around music more than ever. Stacks of notebooks filled with lyrics and rhymes filled his room. A friend gifted him a Macbook with Garageband and a mandate to “Take music seriously.” Donahue rose to the occasion. Nearly every day, he would prop the laptop on a shelf and lean over the microphone, freestyling to Kanye’s 808s & Heartbreak instrumental tracks. Those raps into the laptop became his first mixtape.

In 2011, he opened for Kool Keith at a club in Lexington—it was his first show as a rapper, and his first under the moniker 4D. “‘D’ is the fourth letter of the alphabet and the first letter of my last name,” he explains. “I also like numerology, and the fourth dimension is about time. I wanted my music to stand the test of time.” 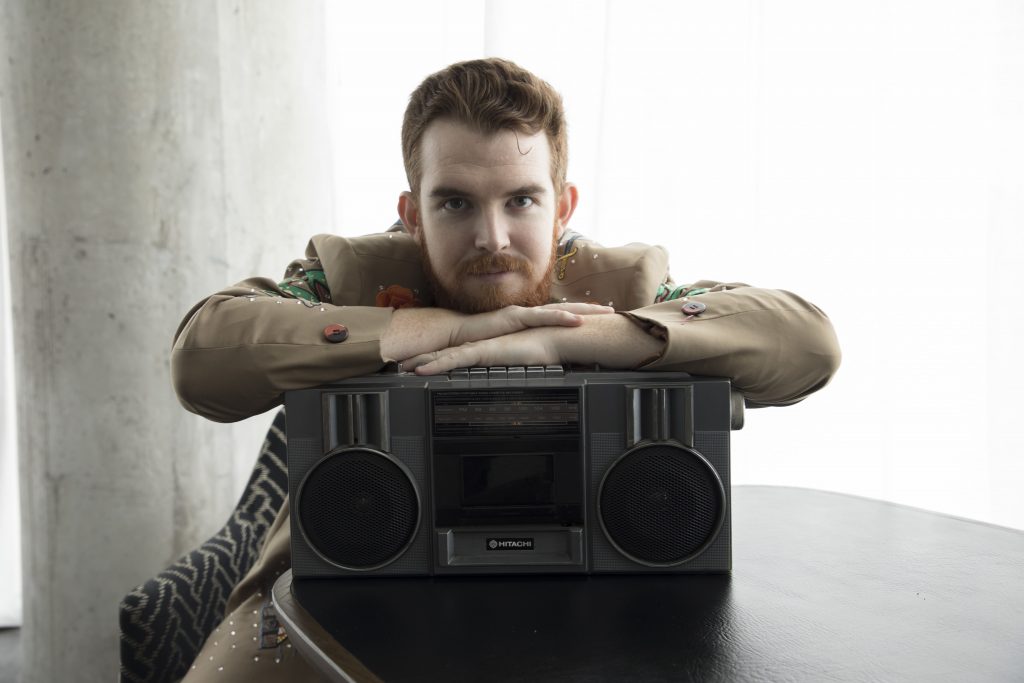 Donahue got another internship, this time at a marketing agency in Lexington. One of the clients owned several McDonald’s franchises. “He hired me to work for him directly,” Donahue explains. A lucky break, but something wasn’t right. “He was shady. He was up to some questionable activity,” Donahue says, leaving out the details. But he stuck it out for nearly a year. One day, his employer offered to invest in his music career. The offer felt wrong. “I knew I didn’t want to be indebted to anyone,” Donahue says with intention. “And I knew then that all I wanted to do was music. So I quit.”

At the invitation of his friend Tom Melchior, who was convinced Donahue would find his place in Music City, Donahue visited Nashville in 2011. During his two-day visit, he met future Cherub guitarist and keyboardist Jordan “Nephew” Bartlett, who became his producer on future projects, and Classic Williams, who battled him in a freestyle rap for more than an hour. He also met beatmaker Aaron “Danny Melonz” Howard and future Cherub drummer Nick Curtis. The visit was enough to convince Donahue to make the move.

Behind his apartment was The End. There, he saw his first Nashville rap show with OpenMic, now Mike Floss. He started working on projects with Curtis and Bartlett and shed 4D for a new title: Jung Youth. The name, he explains, comes from a college connection. “Back at UK, a friend and I would drive in his car and freestyle. We called ourselves ‘Young Youth.’ I wanted to honor my past but not take the whole name. I was also really into dream analysis. So I took the name ‘Jung Youth’ from Carl Jung.” JUNG is also an acronym for Justice Under New Gods. “People worship new gods like the Kardashians and the Internet. I want to help people see through the facade,” he pauses and recalls his old high school emo band. “Maybe my music is still politically motivated.”

Two years after moving to Nashville, Donahue performed at Mercy Lounge as part of 8 Off 8th. He joined the Red Bull music program and opened for Mobb Deep at Exit/In. He also opened for The Cool Kids at Basement East. At that show, he took a risk that affected the trajectory of his music career.

“During my set, I saw an opening in the crowd off to the side. So I ran across the stage and jumped.” Donahue misjudged his jump. He hit the floor awkwardly and got tangled in some red velvet ropes that were behind the crowd. His face went ghostly white as he rebounded and sat on the edge of the stage. With the beat still going, he ad-libbed the line, “I think I broke my fucking leg / I probably should go back to bed.” Truth is, he broke his fibula, but he hobbled back onstage and finished his set. 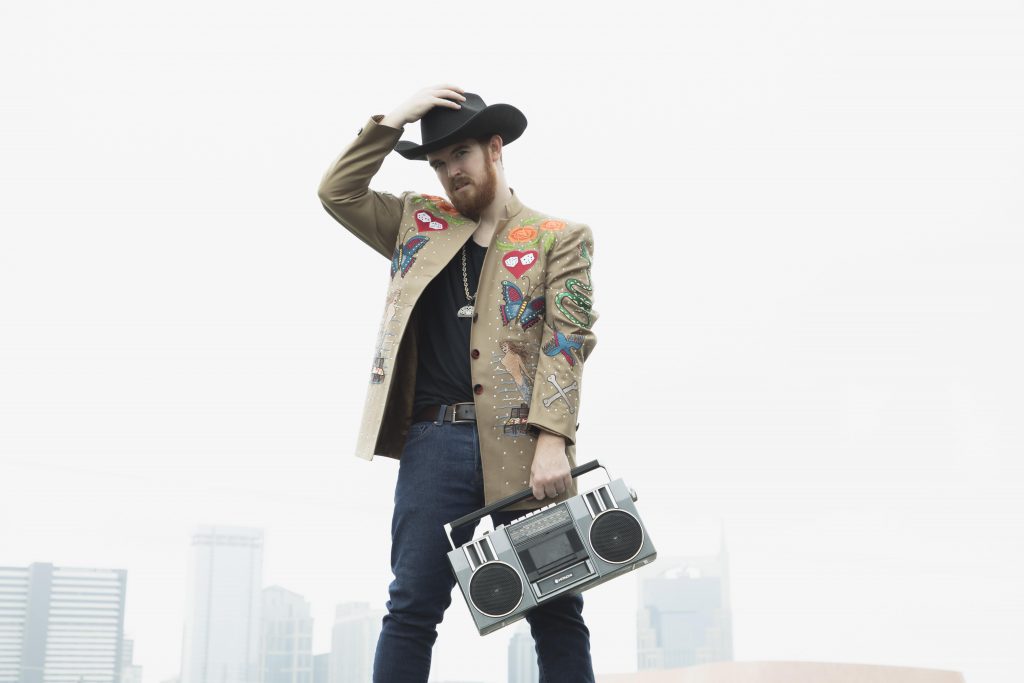 “A few weeks after I broke my leg, I had a recording session with Tommee Profitt, but I was gonna cancel. I was still in pain,” Donahue admits. “I hadn’t even driven since I broke my leg.” Regardless, he decided to go.

He and Profitt agreed to make it a short session. Donahue had the word king rolling around his head, and Profitt built up an ominous half-note bass track. High-pitched strings balanced the bottom end, and a driving drum track gave the music a freight-train-on-the-loose feel. “I was sitting on a stool with my leg propped up on another stool,” Donahue remembers. “And I just cranked out rhymes.” He shakes his head. “It’s ironic that I was recording a song with the line ‘So you better start running,’ and I couldn’t even walk.”

“Only One King” was written and recorded in just over two hours. Shortly after the track was fully produced, Donahue’s publicist presented it to some outlets for licensing. Almost immediately, the National Football League picked up the track. On the same day the deal was inked, “Only One King” premiered at the NFL draft. The track will be featured on promos for this upcoming season of Thursday Night Football.

“‘Only One King’ is unique,” Donahue says. “It makes perfect sense given the situation. After I broke my leg, I stopped giving so many fucks. I went hard for a great show and broke my leg and then kept going. It’s proof that I want this.”

There’s more proof coming. Donahue has a concept album called Ambrosia coming in October, a deluxe edition of his album Stay Chill in November, and another full-length album after that. He’s prolific because he’s in love with his work. He’s in love with the raw honesty in rap. “If I can tell you’re telling the truth, then I’m a fan,” he says. “I know what guys like Classic Williams have gone through, and I know he’s not telling a lie. Petty doesn’t bullshit. Neither do STAN or Gee Slab,” Donahue says, celebrating his local peers. “In rap, people are telling their story, their truth. At the end of the day, if you’re not telling the truth, I don’t want to be around you. With the limited time that I have, I only want to be around people who tell the truth.”

For Donahue, the truth is more than stage lights or promo spots for the NFL. It’s something larger—something that helps people connect and find something more. “I can’t stand to see people get rich and just party,” he says. “These people ignore the things that are wrong with the world and don’t choose to make the world better. They may be safe in their bubble, but I live in the real world, and I can see a lot of people looking stressed out. I don’t think this is a dream. I think this is the truth.” He pauses and adds, “As Dead Prez said, ‘It’s bigger than hip-hop.’”

Jung Youth’s latest album, Ambrosia, will be available on October 6.