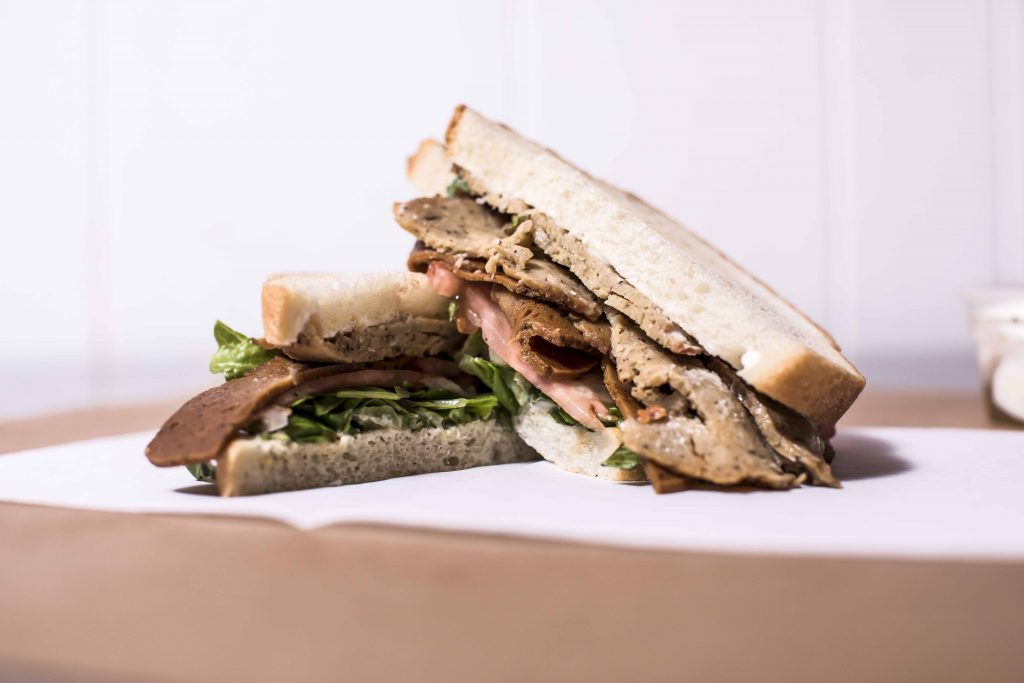 Ben Stix is a drummer. And that’s his real name. It’s not easy being Stix. He laments, tongue only somewhat in cheek: “One of the worst things ever is to have to tell another drummer that I respect that my name is Ben Stix. If someone told me that, I’d be like, ‘Ummm . . . Cooool.’” Stix, though, is so much more than a drummer. He’s also the founder of The BE-Hive, purveyor of plant-based products, producer of parties, and a force for good in the world.

Stix and I are sitting at a picnic table behind The East Room on Gallatin Avenue, in a sort of no-place space between buildings. Ash from piles of tossed cigarettes is swirling in eddies around us. A graffiti frog suggests I should JOIN THE ARMY! There’s a few stickers that say BE, white letters on fire engine red. “What brought us here?” I ask. “To this shitty backyard?” Stix laughs.

We’re here because I want to know more about The BE-Hive, the overarching name for his many projects. Stix is Nashville’s biggest producer of seitan (more on that later), doing wholesale business to restaurants all over the city. He’s also recently opened a Saturday deli counter operating out of The East Room’s kitchen, working with Chef Diana Lee Zadlo. And then there’s his monthly parties that benefit local nonprofits. Drumsticks aren’t the only things in his very full hands.

Stix lays it out. “The goal of The BE-Hive is to make plant-based eating more accessible. We’ve always had a problem with that, and because there weren’t a lot of options in Nashville, we had to cook for ourselves.”

“We?” I jump in. “Who is we?” It all began—like any good story should—with a band. “It started off with Born Empty,” Stix tells me.

“We all lived together, and we lived in the BE-Hive. B-E: Born Empty.” The B was for Ben and the E was for singer Eric Esters. “A.k.a. E-Rock,” Stix adds. “We were both vegetarian-vegan. On the road we’d be like, ‘Hey, let us sleep on your couch and we’ll cook you breakfast.’” Even carnivores have trouble finding good food on the road, but for Stix, “We would just go spend twenty bucks in a grocery store and we would make dope-ass burritos!” 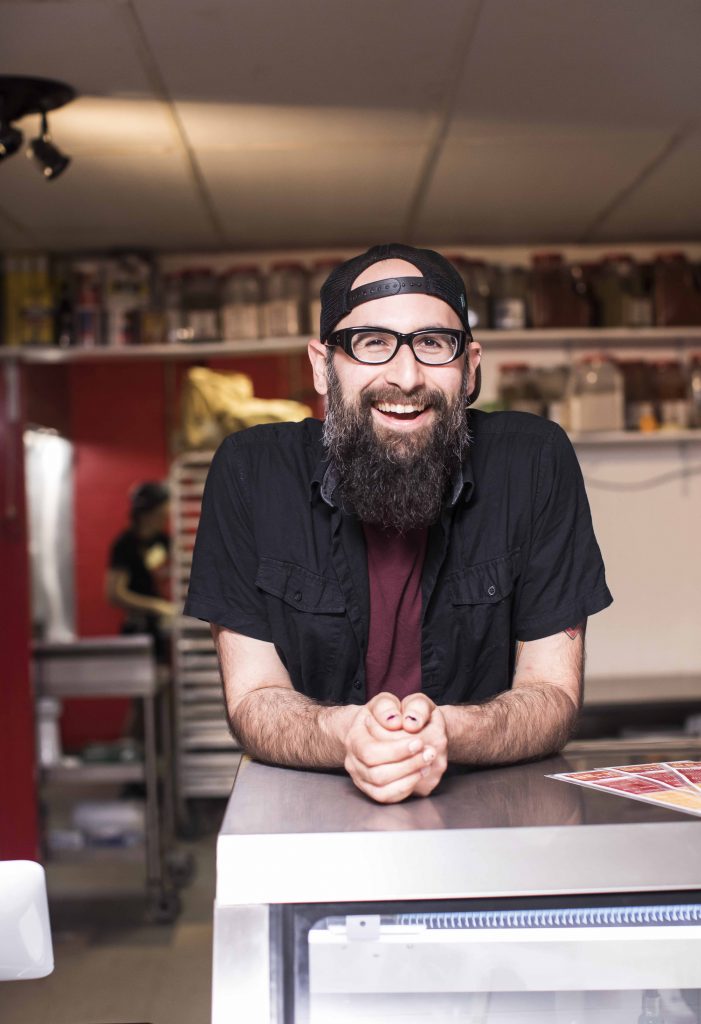 The bartered tour meals turned into a kitchen crash course. “We kinda cut our teeth cooking there, ‘cause sometimes we would wake up in a mansion with a stacked pantry shelf. And sometimes we would—literally there were some places where we were lucky if we found salt.” Stix and his bandmates brought their burgeoning skills back home to the Hive. “We basically got good at using the tools we had to make a wholesome vegan meal,” he explains. “We would also throw these potlucks at the house, at the BE-Hive . . . I counted eighty people at one of our parties once. And the table full of vegan food. And our food always shined through. It was the hit.”

Stix clicks fast-forward. It’s 2011, and he’s working at The Wild Cow, probably Nashville’s best-known source for vegetarian-vegan cuisine (and with their tenth anniversary coming in 2019, one of the oldest as well). But chopping is an awful lot like pounding on the skins. “I would hold a knife like a drumstick,” Stix recalls. “It started to bother me.” The pain grew disruptive. He loved Wild Cow and working in the kitchen, but “it was hurting my wrist, so I picked music over that.”

There were no hard feelings. Stix remained close to the Wild Cow staff, and less than a month later, he had an idea: Wild Cow is closed on Tuesdays—which means their kitchen is empty. What if we did a BE-Hive vegan buffet? Just take it over! Stix remembers thinking. The Tuesday meals quickly grew popular. “We did a different menu every single time. So we basically built up our ability to do different menus and recipes. And then in the process, we started making our own seitan.” 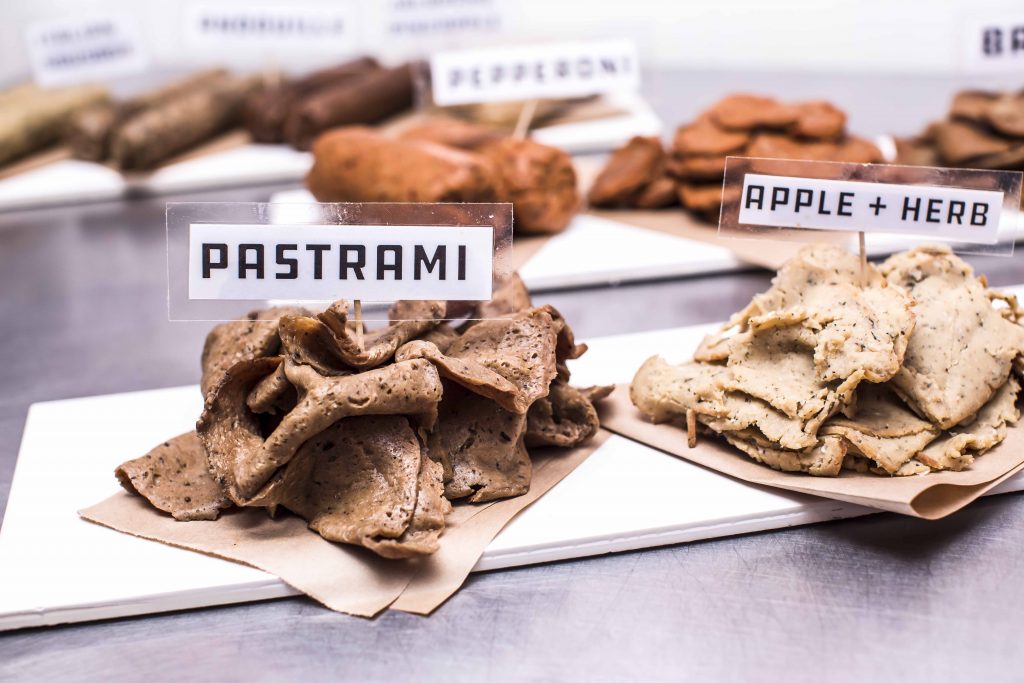 Let’s talk about seitan. Firstly, it’s pronounced say-tan, equal syllabic emphasis, rhymes with Ray-Ban. I’ll let Stix run it down: “Seitan is basically an ancient Asian recipe. It’s a plant-based protein made from vital wheat gluten . . . You can take all-purpose flour and wash some of the bullshit away and you have this protein, this clump, a ball. Then you dry that out and you get this really high-density flour that’s high in protein, and then when you cook it, it’s low-carb and low-fat.” In case you’re wondering, it’s not gluten-free. “It is entirely gluten!” Stix says with a big laugh. “[It’s] ironic and hilarious that I basically started the company in the height of the gluten-free craze. Whatever. It’s fine.”

Seitan on its own is neutrally flavored, so it’s super effective at absorbing sauces and marinades. You can make it taste like anything, and it’s thick, dense, and meaty (some call it “wheat meat”). Stix tells me that’s much of the appeal.

“What’s cool about the seitan thing is you can get a desired texture that really resonates with people who aren’t used to eating plant-based,” Stix posits. “Most people don’t like tofu or tempeh. Those are easy to mess up. I give you something that’s hard to mess up, that you can throw on a sandwich, that tastes good out of the bag.”

The Wild Cow and Graze were the earliest adopters of Stix’s wholesale business, but his product has moved beyond just the vegetarian-vegan spots. Baja Burrito cooks with a chorizo-style seitan. 12 South Taproom adds Stix’s seitan to their meat-heavy menu so they can offer their herbivorous customers something more than just pita and hummus or chips and salsa. Stix blends each batch with the sauces and spices that supply the flavor profile and vacuum seals it. His chefs then have a protein that’s already marinated, simple to cook, and lasts essentially forever in the freezer. “[I’m] working with restaurants,” Stix explains, “to be able to provide them an easy vegan option that they don’t really have to think about, that the customers will really like . . . And since we’re building a brand in town, customers know it’s from us.” 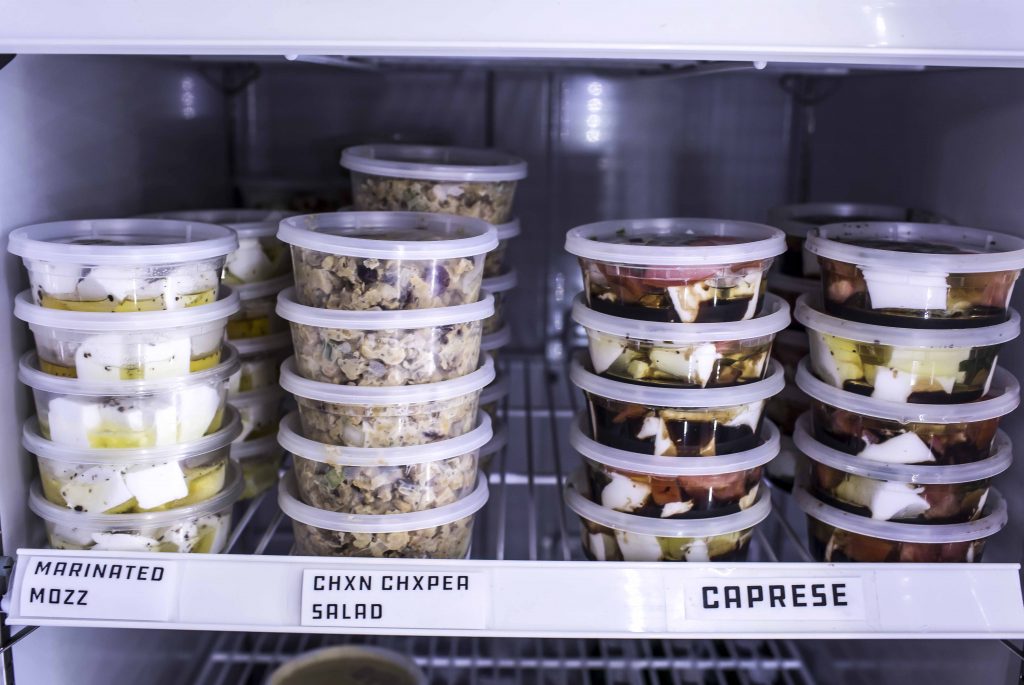 I’m chatting with Stix a few days after his third Saturday deli. The menu, developed with Chef Zadlo, features so, so many forms of seitan: wings, ribs, pastrami, meatballs, and more. I’m chewing over the names. There’s no meat in the meatballs. There’s no bones in the ribs or wings; they’re just different shapes and sauces. But what else could Stix call them? “First off, I don’t like the fake meat term,” he sighs. “But!” he continues emphatically, “At the same time, it’s a relatability issue . . . You love steak and cheese, right? But you wanna eat healthier. If I had a completely different name for this thing, you might be a little bit hesitant. But if I said, ‘Here, try this steak and cheese’ . . . It obviously looks like a steak and cheese, they’re gonna be like ‘Daaaaamn!’ And they’re gonna eat it, and then you tell ‘em it’s vegan, and they’ll be like, ‘Oh.’”

Though Stix is enjoying the deli so far, he’s clear that a full-size restaurant is not in his future. “I feel like it would take over my life for the next three or four years,” he surmises (accurately, based on the restaurateurs I’ve observed). “Whereas I kinda have bigger ideas to where this will grow. Where I can grow.” It’s a question of scale for Stix, and how broadly he can spread his plant-based gospel. “If I can really work the wholesale thing, then I’ll be feeding more people in general, you know? The restaurant has a capacity . . . If I have a hundred restaurants serving my food in the region, then I have thousands of people eating my food every single day. And at that point, I can make more of a difference.”

Even as a regular eater of meat, I recognize the brutality and the environmental costs of the industrialized meat industry. Stix founded The BE-Hive to help move us all toward a more humane, healthier future. Eating a plant-based diet in Nashville would’ve been nearly impossible a decade ago, before Wild Cow and multiple Turnip Trucks, but the city has changed, and not all change is for the worse. Stix recalls carnivorous friends who would show up at his vegan buffets as skeptics but depart surprisingly satisfied—and not uncomfortably full, like what might occur after a hearty meal at a meat and three. “That’s the product!” Stix exclaims. “That’s the end goal. That’s when I get people to be like, ‘Wait, this is possible.’ There is hope. And at that point, it [gives] people a way to be like, ‘Maybe I don’t have to eat meat every single meal. Maybe I don’t have to support this. Maybe there is hope.’” 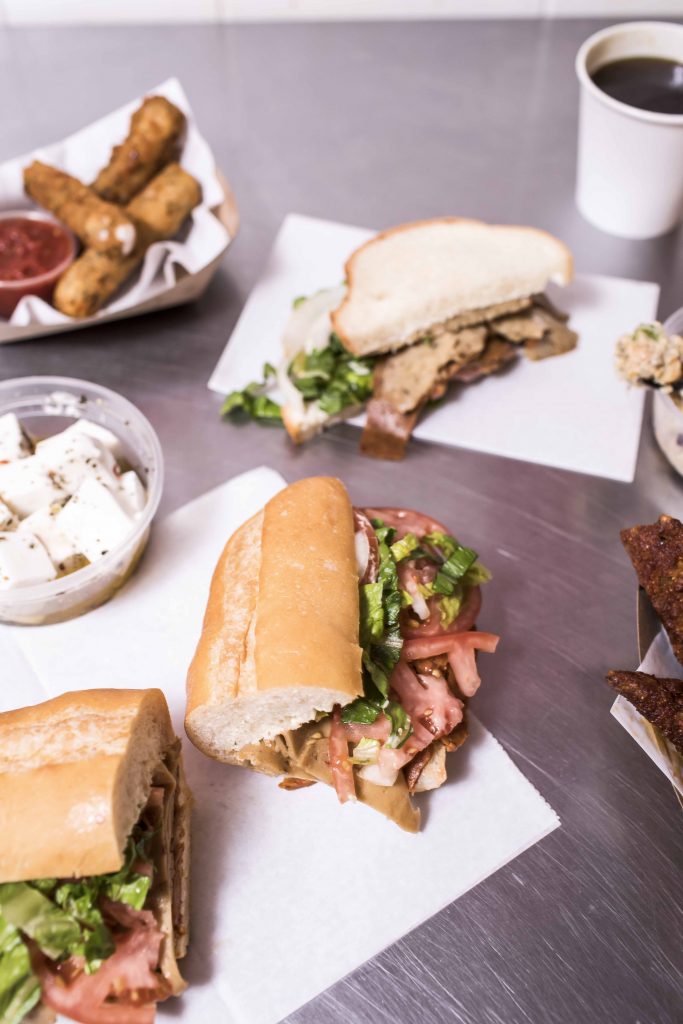 Later Stix tells me, “The BE-Hive is more than just a business. It’s a mentality. It’s a way of life.”

Nowhere is the way to BE more clear than at the Hive’s monthly dinner. It’s a warm night when I return to The East Room, this time heading into the dim interior for a superjam. With the help of Joshua Blaylock (of local funk-soul-jazz powerhouse Dynamo), Stix has put together an evening of food, music, and community. A portion of proceeds will benefit the Mid-Tennessee chapter of SORBA, the Southern Off-Road Bicycle Association, an advocacy group for building, preserving, and maintaining off-road bike trails in the region. The kitchen offerings are listed on the Summer Vibes Menu: there’s a bacon cheeseburger without bacon, cheese, or hamburger; hickory smoked seitan ribs; and sides like sweet corn salad with red peppers and potato salad made with a homemade soy mayo. They’ve already run out of dessert, chocolate dirt cups made with coconut milk, but Stix finds a hidden stash and passes a cup to me on the sly. Everything is delicious, and I eat everything. Afterward, I don’t need to pass out; there’s no food coma. It feels slightly miraculous.

The room is packed with a crowd that’s diverse in every sense of the word. There are long-haired metalheads, skinny old hippies, tattooed mohawked punks, afro’ed jazz cats. The beard game is strong in here. Stix seems to know them all and greets each person with an extended, warm, and meaningful embrace. This is The BE-Hive at its best: a parade for the senses in a room full of love and respect. Blaylock informs me they’re expecting somewhere between fifty and eighty musicians to get on stage throughout the night, but sadly I have to take off before the music starts. On the stroll back to my car, folks with gig bags and keyboard stands are coming from all directions toward The East Room. I count three. Five. Nine. Fourteen. Twenty. It’s gonna be a busy night at The BE-Hive.

BE-Hive’s deli is open every Saturday. Their next monthly dinner will be July 2.