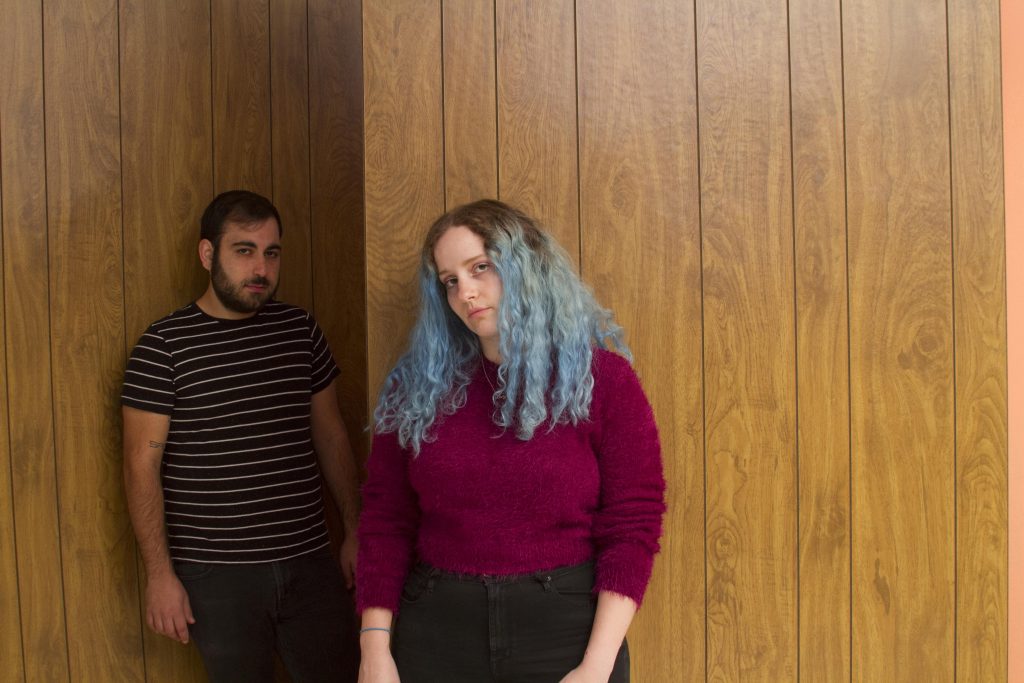 Caked in thick melodic mud, the opening line of Sad Baxter’s new single “Baby” is the perfect intro to an oddball duo on the rise. “I grew up in a funeral home,” sings front woman and songwriter Deezy Violet, launching herself and drummer Alex Mojaverian into two and a half minutes of grunge-pop perfection.

“It’s basically about growing up and feeling surrounded by thoughts of death and sadness,” she says, jarringly blunt but with tender eyes framed in waterfalls of aquamarine hair. “Losing my dad [seven years ago] probably came into play.”

Violet considered her dad her best friend, so his death was possibly even more traumatic than is to be expected. But add that to another period of separation earlier in life, and the funeral home image becomes much more than an irreverent exaggeration.

“He was also in prison the whole time I was in high school, so it was this weird feeling of loss throughout a lot of my time as a songwriter,” she explains. “Honestly, I’ll write things like that and not think much of it, and then I’ll look back later like, Whoa, I just did a weird analyzation and it’s freaking me out.”

“It’s loud and it’s obnoxious—but it’s catchy,” Violet says, munching on a blueberry muffin in an Eastside cafe and trying not to think about her still-unpaid rent.

But for all the slumpy rage of the music, its members are the complete opposite in person. An hour in Sad Baxter’s company is spent in near-constant laughter, punctuated by inside jokes honed to perfection over more than ten years as friends, bandmates, and more. 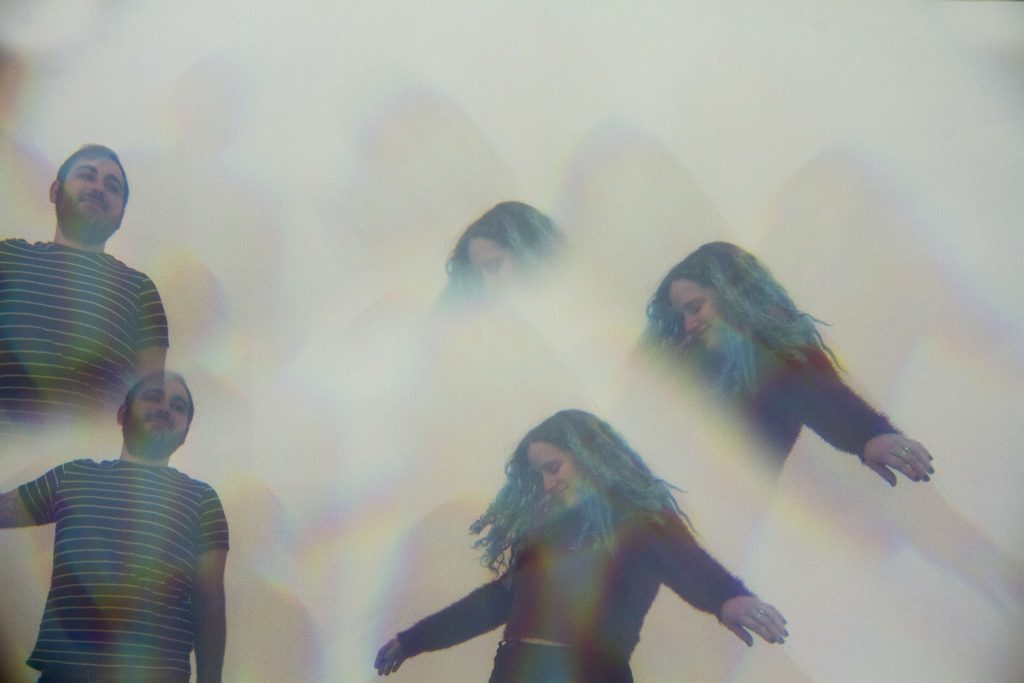 The pair met while attending Boston’s Berklee College of Music, where they lived in the same apartment building and shared a group of music-loving friends—at one point four different bands were staffed by eight people, Mojaverian explains—but he and Violet hit it off right away. They actually dated for more than three years but now think of themselves more like siblings, although not in that creepy, White Stripes kind of way.

“It’s funny when I think about the fact we dated,” Violet says with a laugh. “When we started dating at eighteen, we would have these conversations about how we are best friends first and the relationship comes second.”

“We both ended up getting to the same spot, which with breakups obviously doesn’t normally happen,” Mojaverian adds. “We knew we wanted to keep playing music together, but we wanted to start over and do some stuff differently. It was weirdly the easiest hard breakup ever.”

Mojaverian had picked up on Violet’s knack for musical truth early on, and when he moved to Nashville in 2012, she followed six months later. It was here that they recorded the 2014 full length Weirdy, which established Sad Baxter as a vehicle for Violet’s incredibly open songwriting.

“It’s like sometimes you need someone else to describe how you’re feeling,” Mojaverian says. “So many people are trying to express themselves, and they go to someone else that had the same experience to get their perspective.”

Sadly, Violet’s perspective is all too relatable. She admits to struggling with a sense of darkness throughout her life . . . and to using her sense of humor as a shield.

“Funny people tend to be depressed,” she says matter-of-factly. “When people tell me they can’t understand how I could be depressed, because I’m funny, I think back to my dad’s memorial service. When he passed away, it was the hardest thing I’ve ever had to deal with in my life. But at his memorial service, I was cracking jokes to everyone because I didn’t know how to deal.” 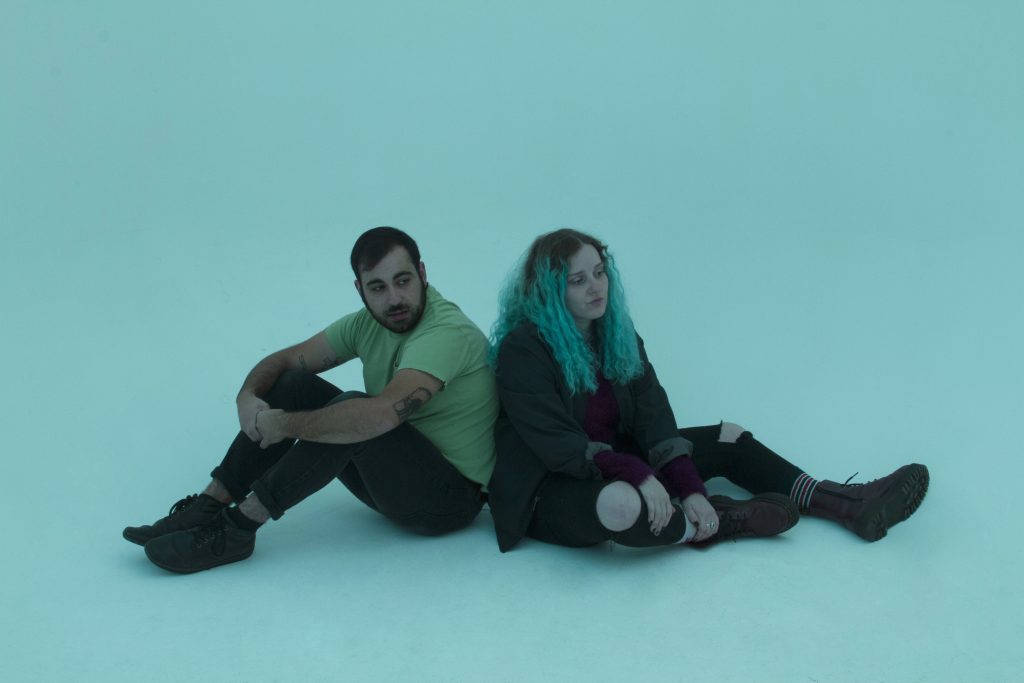 Growing up in New Jersey, she first found a way to deal at thirteen, when a camp counselor encouraged her to start writing songs. Now that sense of relief comes through in Sad Baxter.

“Once I wrote a couple, I couldn’t stop,” she says. “I have a lot of sadness in my life, but at the same time I have so much stuff I’m thankful for. I feel like my songs are definitely like my diary, so that’s where I get most of the negativity out . . . I have definitely had bouts of struggling over the years. Then last fall was pretty terrible, so I went on antidepressants and haven’t felt terrible like that since. But even then when I would think of myself I would think of myself as a happy person . . . It’s this weird thing where my songs probably sound like I’m gonna kill myself, but then I’m like, ‘I love life’ outside of that.”

Perhaps that’s why fans and critics alike are starting to pick up on the band. NPR Music recently praised the way “Baby” spoke to the conflicted, overwhelming nature of modern society, with Violet finding respite in the track’s triumphantly overdriven crescendo. “I don’t wanna think ’bout anything at all too hard,” she sings. “I just wanna lay down in my baby’s arms.”

The track was released as a seven-inch single late last year along with its dreary B-side, “Sliver.” Both songs were part of a full recording session, but the duo decided against doing another conventional album release. Instead, they’ll likely let the songs trickle out over the course of 2018, deftly angling to sustain the buzz. They’ll also expand their touring efforts, hitting the South by Southwest festival for the first time and hopefully booking a UK/Europe run.

Both Violet and Mojaverian know it’s still early, but they say this has already been the most successful period of their young band’s career—which may not be so helpful as they work on a new batch of down-in-the-dumps anthems. Luckily, there’s still plenty to be depressed about.

“Lately I’ve been paying more attention politically than any other time in my life,” Violet says. “And it’s the most disheartening thing ever. It’s like I have known my entire life that most of this country doesn’t value women or people of color the same way they value white men, but it’s really exhausting when it’s shoved in my face—on top of being catcalled every single day of my life. It’s like I can’t look at the news without a reminder that, nope, this country still sucks and hates you and doesn’t care if you die. If you’re pregnant, that’s cool and they want the baby to live, but they don’t care about you.

Good thing she has an outlet where being brutally honest is the goal.

“It will probably come up,” she says. “It’s just so much easier to put it all out there.”