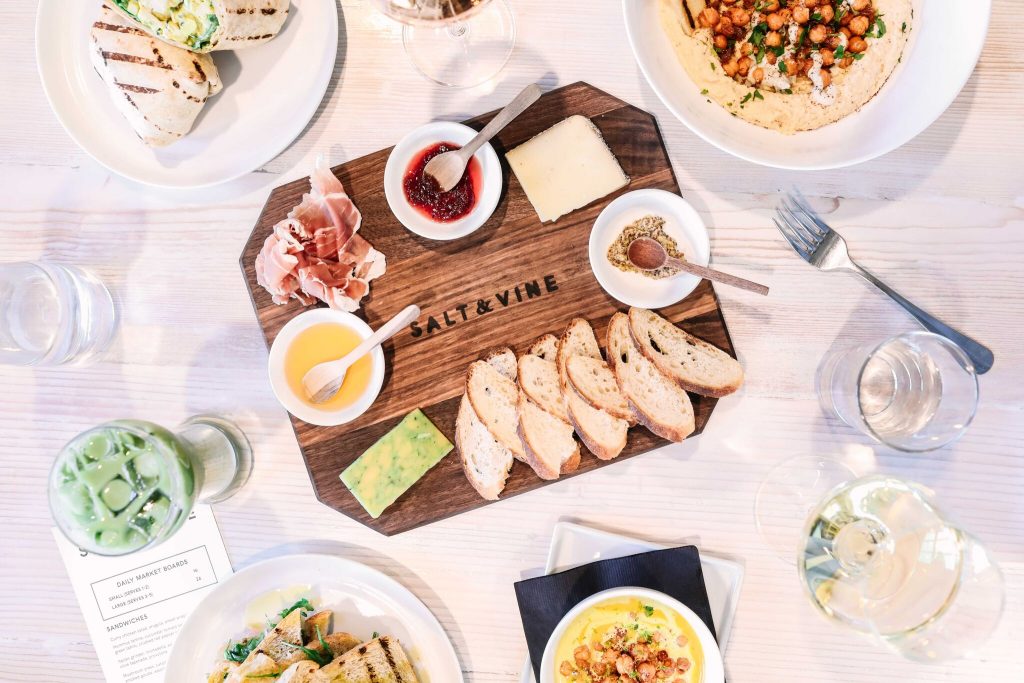 Rahaf Amer learns fast. The twenty-eight-year-old had only two other kitchen jobs before she was hired as sous chef at restaurant and wine bar Salt & Vine. Eight months later, she is now taking over as executive chef after the departure of Culinary Director Molly Fitzpatrick Martin.

“I used to think that I could never go on Hell’s Kitchen because watching that show would scare me, but after working here, I could go to Hell’s Kitchen and it would be like paradise for me,” Amer says, laughing, from across a large wooden table in the center of the space in Sylvan Heights. “It would be super easy.”

Maybe that’s because Amer is used to Gordon Ramsey’s style of baptism by stovetop. She’d been at her first kitchen job a week and a half when a coworker burned her eyebrows off and Amer had to fill in. She didn’t know how to make most of the dishes, and the kitchen manager was unhelpful. Finally, the owner told her to make the dishes like she would make them at home. Afterward he asked the customers for feedback, and it was overwhelmingly positive. Amer was relieved and felt more sure of herself. “I feel like those moments where you’re thrown in the fire are the moments where you’re learning the most, because you don’t have time to think—you just have to do,” she says 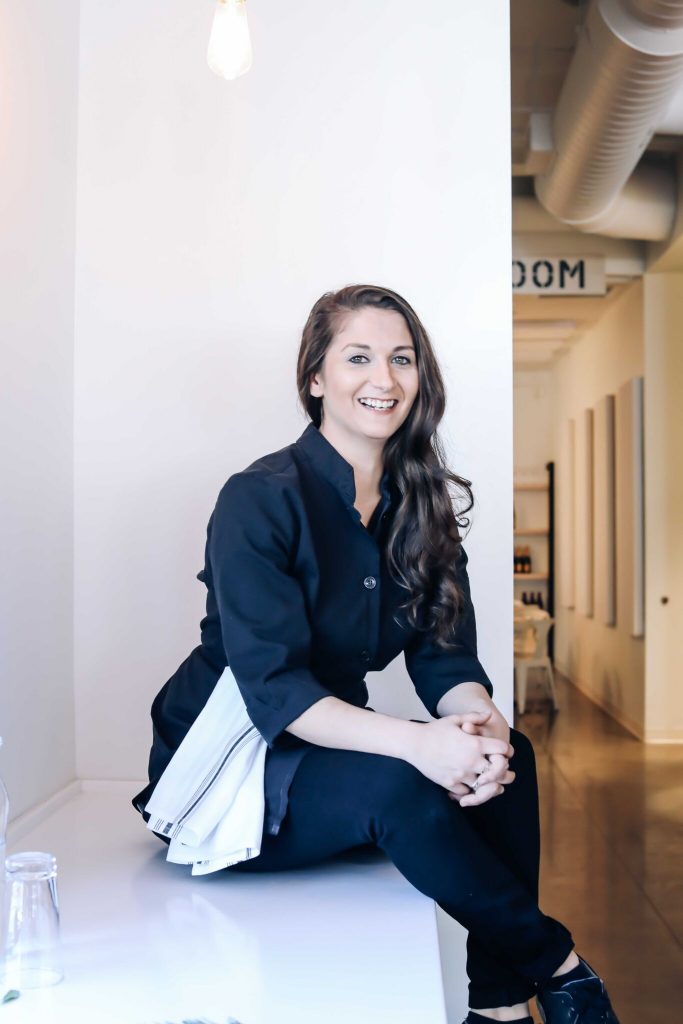 Amer never went to culinary school, as her Syrian parents insisted she get a traditional degree. After graduating from Virginia Commonwealth University, the Washington, DC native opted to save money and take a real-world crash course by working in local kitchens.

But even before she was filling in for eyebrow-less chefs, Amer was passionate about food. As a child, she loved the Middle Eastern food and recipes passed down to her dad from her grandmother. However, the first meal she cooked was with a neighbor from Thailand when she was thirteen. They made pad thai, and she took it home to her parents and five siblings to rave reviews. “I just loved that feeling of everybody being like, ‘Oh my God, this is really good and you made it,’ and ever since then I’ve just been cooking,” she says. “I mean, I cooked in college for all my friends and ex-boyfriends—that’s how I got them in the first place.”

She continued to teach herself by watching Rachael Ray and Bobby Flay, but says she owes most of her knowledge to her time in professional kitchens—like the gastropub she’d worked at for four months when her boyfriend got a promotion that required him to relocate to Nashville. “It was either find a new boyfriend or move, and it’s a lot easier just to move these days, so that’s what brought me here,” she says.

At first, Nashville wasn’t her taste. “When I first moved here I hated it. I was like—every restaurant I went to, all the food was the same,” she says. “It was shrimp and grits and trout, shrimp and grits and trout, and coming from DC where you have a mixing bowl of everything, I was just like, ‘What the hell?’” But as the food scene has grown, so has her fondness for the city. “Now I kind of see when I go out to eat the types of stuff I used to see in DC, which is really cool,” says Amer, whose long dark hair is pulled back beneath a BNA-embossed baseball cap. 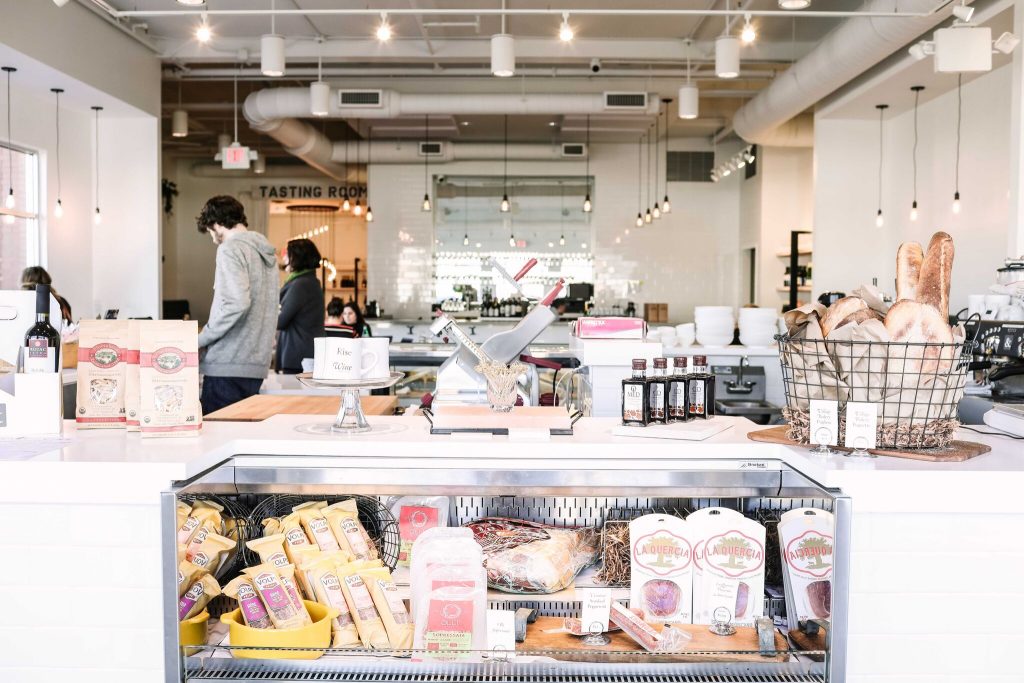 After a stint at Bellevue gastropub {PUB}licity and as a private chef, she got the job at Salt & Vine via Craigslist when they opened in 2016. The brainchild of owner and sommelier Mattie Jackson (daughter of country music legend Alan Jackson), partner and general manager Hannah Schneider, and Martin, Salt & Vine serves lunch and dinner and specializes in market boards and shareable plates, which Jackson then pairs with various wines. Behind a white curtain in the back of the restaurant is a tasting room that they use for weekly wine tastings as well as for private events—for which Amer will often create custom menus. And the bottle shop next door stocks a variety of reds and whites, all handpicked by Jackson, and most are priced modestly between $13 and $25 per bottle.

The cuisine is eclectic, incorporating flavors from around the world, and the minimalist interior allows the food and drink to shine without distraction. The large open room has market counter and retail space in the front, while communal tables, a polished concrete bar, and yellow metal chairs finish out the space. The walls and ceiling are a clean white, and even on a rainy day the space seems bright. There isn’t a tablecloth in sight, as part of the restaurant’s mission to take the pretension out of wine.

Now that Amer is in charge of the kitchen, she’s been able to get more creative. Her initial specialty was traditional French food with the occasional twist, and she rarely stepped outside her comfort zone. But she acknowledges that Martin left her with big shoes to fill. “I was probably a little hesitant to push the boundaries at that point,” she says. “You know, I’ll always think about the guests that we have coming, but I feel a lot more confident and comfortable just putting my own spin on stuff without having to get three other people’s approval or verification before, which I think is really cool.” 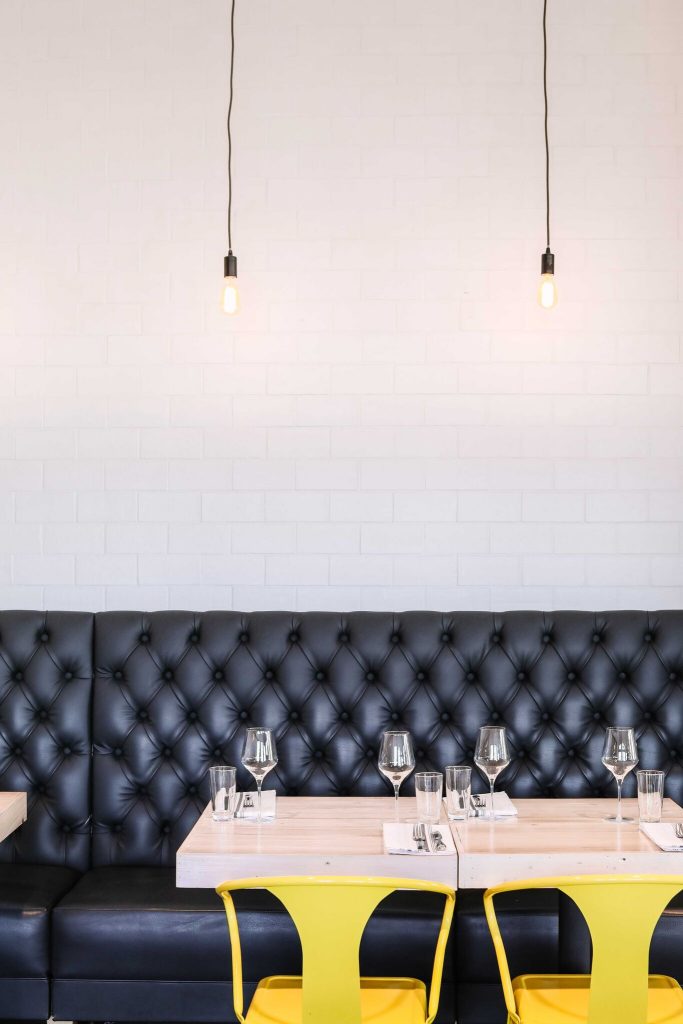 The lunch menu consists of lighter fare, including a hummus tartine with zucchini, pickled red onion, and an herb goat cheese spread, and the Sambal salad with napa cabbage, arugula, carrot, avocado, radish, crispy mushroom, green beans, and cilantro, along with myriad sides. The dinner menu is a little heartier, featuring dishes like beef sliders with gruyere, caramelized shallots, and thyme aioli, and crispy Brussels sprouts with radish, dried cranberries, hazelnuts, and citrus vinaigrette. For those just looking for something to snack on while they sip their wine, they have smaller items like radish toast with cream cheese, smoked salt, and lemon, which is a patron favorite. They also offer a number of gluten-free and vegan options.

The kitchen staff is small, consisting of just four people right now, but being in charge for the first time has forced Amer to channel her newfound confidence into her role as the team leader. “I try to really run the kitchen, like, treating everybody as a human being, not just a number here,” she says. “But also, you have to be assertive. You have to get your job done. So, I always say, ‘I’m your friend outside of work or off the clock, but during work, it’s like, we gotta go.’”

Salt & Vine’s staff is largely made up of women, which Amer says is a nice change from her previous jobs where she was oftentimes the only woman in the kitchen. She noticed a clear double standard. “You feel the need to overcompensate because all these guys are looking at you and they’re like, ‘Oh, you can’t lift this big bag of potatoes up, so you’re a lesser cook than I am,’” she says. “So, I guess that’s one of my biggest struggles that I’ve had to kind of overcome working in a male-dominated industry is just having to earn the respect of people that you shouldn’t have to earn the respect from.” 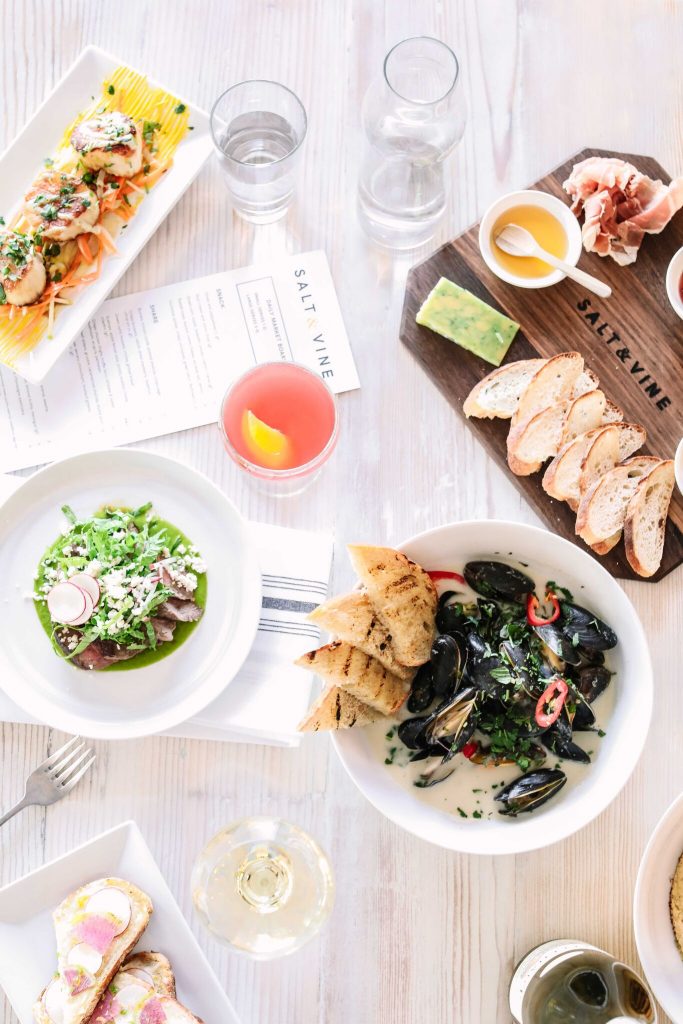 In a couple of hours, these benches and the seats at the surrounding tables will be filled with customers, and Amer will be back in the kitchen. The hours are long, and she’s here all the time, completing countless tasks. She tirelessly works on new dishes and half jokes that she’ll rework a recipe seventy-five times, asking Jackson and Schneider to try each iteration. She won’t stop until it’s perfect. “I’ve really found my voice I guess in the past year and now you can’t shut me up,” she says, laughing.

Sometimes her self-assuredness still falters. “There are some days where I wake up and I go, ‘I have no idea what the fuck I’m doing,’” she admits. However, she’s been training for this job since she was thirteen, and now that she’s got it, she wouldn’t have it any other way. “Most of the time it doesn’t feel like I’m working,” she says. “The people here are great, I’m doing what I love to do, and I get to drink wine like 75 percent of the time that I’m here, so it’s not a bad gig.”