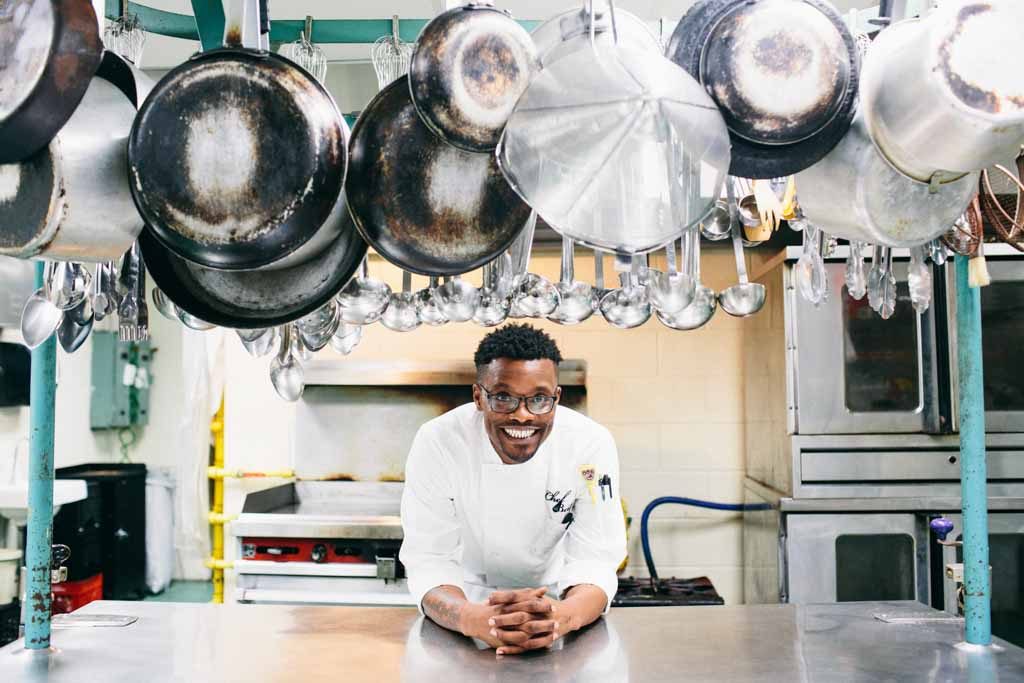 Keith Batts doesn’t have your typical chef gig. He doesn’t hobnob with VIP tables or agonize over the placement of a garnish on a fifty-dollar plate—heck, most of the people who eat his food don’t even pay for it.

It’s not that Keith can’t keep pace with other chefs—he’s done that at Johnson & Wales University’s College of Culinary Arts and TomKats Catering (which manages Acme Feed & Seed, The Southern Steak & Oyster, and the Loveless Café)—it’s just that for as much as Keith cares about cuisine, he cares even more about his community.

Chef Batts, as he’s known, took an unconventional path to the kitchen we’re standing in now. We’re at the Martha O’Bryan Center, in the heart of the city’s largest public housing complex, Cayce Homes. Everyone’s heard the story of the chef who started out as a prep or fry cook in a greasy burger joint, then moved up one step at a time, progressing into cooking increasingly upscale fare at more critically acclaimed restaurants. Keith has taken somewhat of the opposite approach, but if you ask him, things have only moved in one direction—up.

At Johnson & Wales, Keith absorbed everything he could about different cooking methods and types of cuisine. He liked all of it—except for baking in his pastry class, ironically. After graduating school he got an internship with TomKats Catering, which had him cooking everywhere from the VIP area at Bonnaroo to the kitchen at Saffire in Franklin. Soon after, he got a permanent gig working at Old Hickory Steakhouse in the Opryland Hotel. By jumping straight into culinary school, Keith was able to shave off quite a few years of paying his dues behind the line. “A year of culinary school is worth, like, sixteen years’ experience in the culinary world,” Keith says, raising his eyebrows. 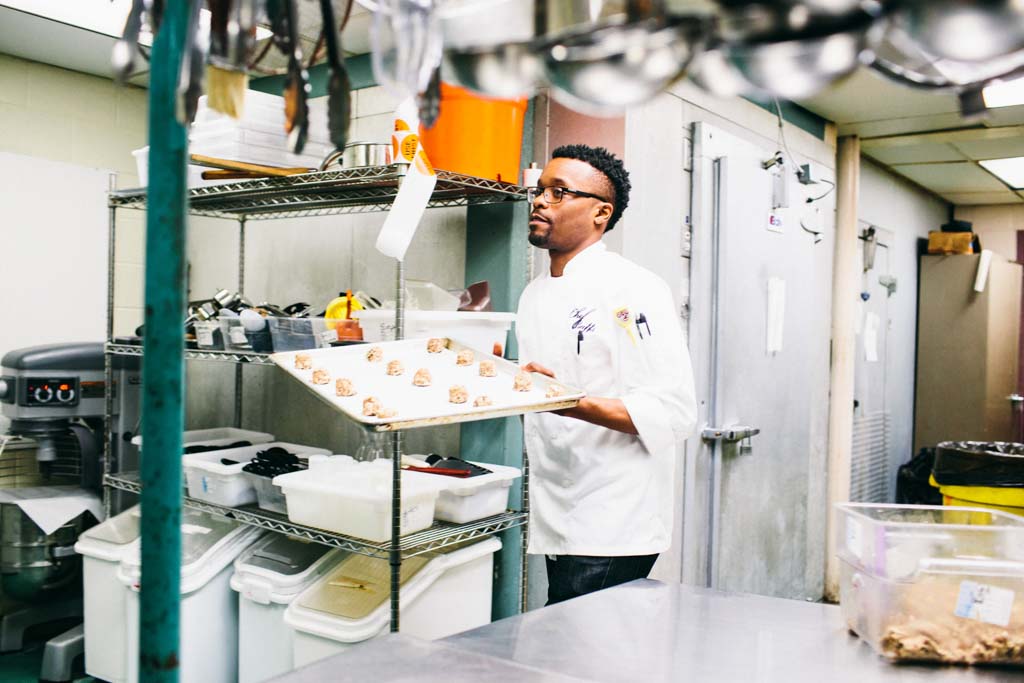 After excelling in his first two positions, Keith could have gone to work in a number of kitchens, but one opportunity in particular caught his eye—an opening for a new sous chef at the Martha O’Bryan Center, one of the city’s longest-standing anti-poverty nonprofit organizations.

For many chefs, this might have seemed like a strange move. There’s not a lot of money or glamour in cooking for the impoverished, but for Keith it was more than that. “Martha O’Bryan really holds a special place in my heart,” he says. “I’m from East Nashville, and as a kid I came to the center. I was in room 101 all the way through 106.” Even after he left for college, Keith stayed plugged in with the center, coming by to volunteer with his fraternity. So when the position opened up, Keith saw it as an opportunity to give his talents back to the community he came from. Without hesitation, he took the job.

Keith started in January 2012, and by February he was already running the place. The director of food services at the time had to take a two-month leave of absence to care for a loved one, and Keith was called upon to take over for the two months she was gone. “I guess I held the ship together and they were impressed,” he shrugs humbly. Only a few months after that, the previous director left and Keith took over for good. “I think it was timing and luck,” he says. “The previous director recommended me for the job. They did put the job out there, but I guess they didn’t find anybody that would do better than me.”

Every morning, Keith wakes up at sunrise, drives from the far west side all the way to Cayce Homes, and works hard all day, sometimes until nightfall. He has a three man team that works together in the Martha O’Bryan Center kitchen to crank out balanced, healthy meals every day for everyone from children to the elderly. “I make about one thousand meals a day,” he says, nodding his head. “We have an early learning center and daycare that we cook for. We have Explore! Community School that we cook for. We do a Meals on Wheels program, and we also do an after-school snack program.” 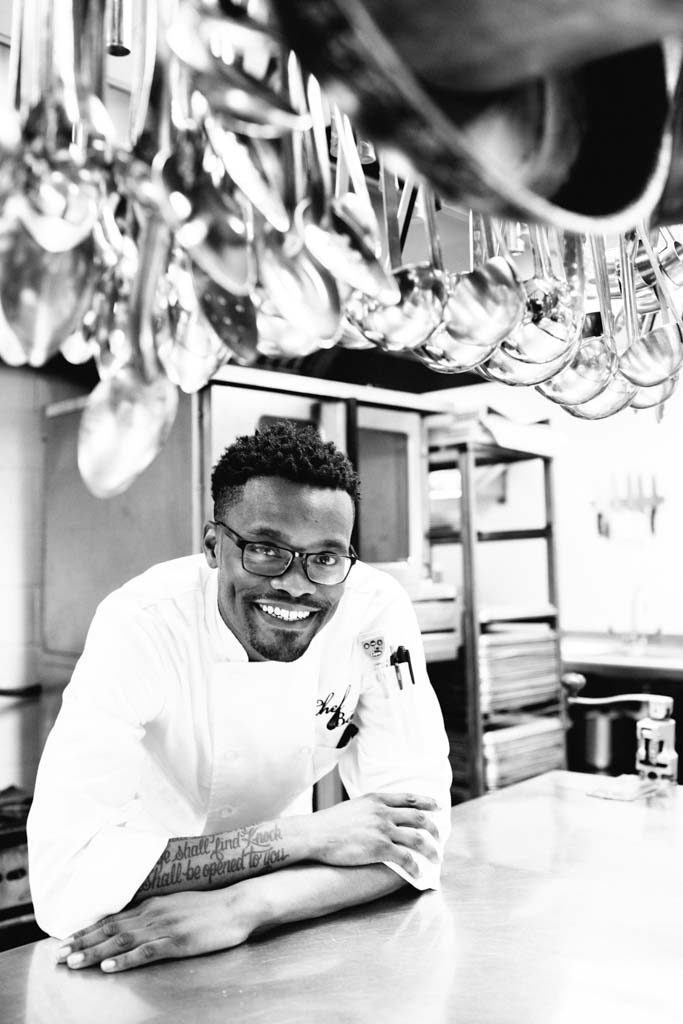 Cooking for such a broad swath of people can be tough, particularly when you’re cooking for a lot of the same faces every day. Keith admits he’s had a few culinary missteps along the way—usually from getting a bit too ambitious for his audience—but over time he’s been able to find a good balance. “We do a lot of ‘from scratch’ cooking here, and I also like to incorporate different genres of food for the kids,” he says. “We have turkey Bolognese; we have jerk chicken; we do a harvest salad. I like to expand their palates with fresh fruits and vegetables.”

The trick is to push their boundaries just enough to keep things from getting stale, but not so much that they feel alienated or look at a plate and have no idea what’s on it. Still, there will always be an element of trial and error. “For the kids, I used to make an orange couscous salad. They weren’t very fond of that . . . I had to stop making it,” he laughs, leaning back on a desk in his office.

Some challenges are recurring, like when kids taste fresh vegetables that they’re used to eating from a can and think there’s something wrong with them. “They always tell me it doesn’t taste right, and I say, ‘No, the can doesn’t taste right,’” he says. Other challenges are inevitable—the older Meals on Wheels recipients tend to be less adventurous than the younger clientele. But when you’re providing food for folks that might otherwise go hungry, pleasing everyone is a less important goal than making sure everyone is getting fed.

When your work matters this much, it isn’t optional. Keith is there every day, he doesn’t leave early, and he doesn’t come in late. Before Thanksgiving, he organizes 100 Dreams Turkey Drive, preparing crazy amounts of sides to accompany the turkeys they give to families in need. The day it all comes together, Keith usually ends up working nearly twenty-four hours straight to pull the whole thing off. Though I’m in awe of Keith’s work ethic, he doesn’t see it as work at all, even when the days get long.

“FOR THE KIDS, I USED TO MAKE AN ORANGE COUSCOUS SALAD. THEY WEREN’T VERY FOND OF THAT."

Keith absolutely loves his job, and I don’t think he could see himself doing anything else in the world. Which makes you wonder, what business does a guy like this have starting a cookie company on the side? He sure isn’t hurting for something to do in his spare time— if he has any. It turns out, like a lot of great ideas, the cookies were an accident.

“The center needed cookies for an event, and I was like, that’s not that hard,” he says, rolling his eyes to the right. “So I waited until the last minute. We needed them on a Monday, and I was so confident in my abilities that I didn’t come in until Sunday. They needed three hundred cookies. So I look up a recipe. I get it, tweak it how I want to tweak it, make three hundred cookies. Scoop them out, put them on a pan, cook them up. So the timer goes off the last time, I pull it out, and it’s just a sheet of chocolate chips—no cookies.” He tweaked the recipe a bit and had another go at it. Three hundred more cookies—same thing. “So I slowed it down, tweaked it one more time, made twelve cookies this time, and they came out perfectly. Well, maybe not perfectly, but they came out like cookies.”

The next day, the cookies were a hit. By popular demand, Keith started making them from time to time for special occasions and events only. One day, one of the volunteers at the center tried one and swore up and down that Keith had to start selling them. Something clicked, and he decided she was right. 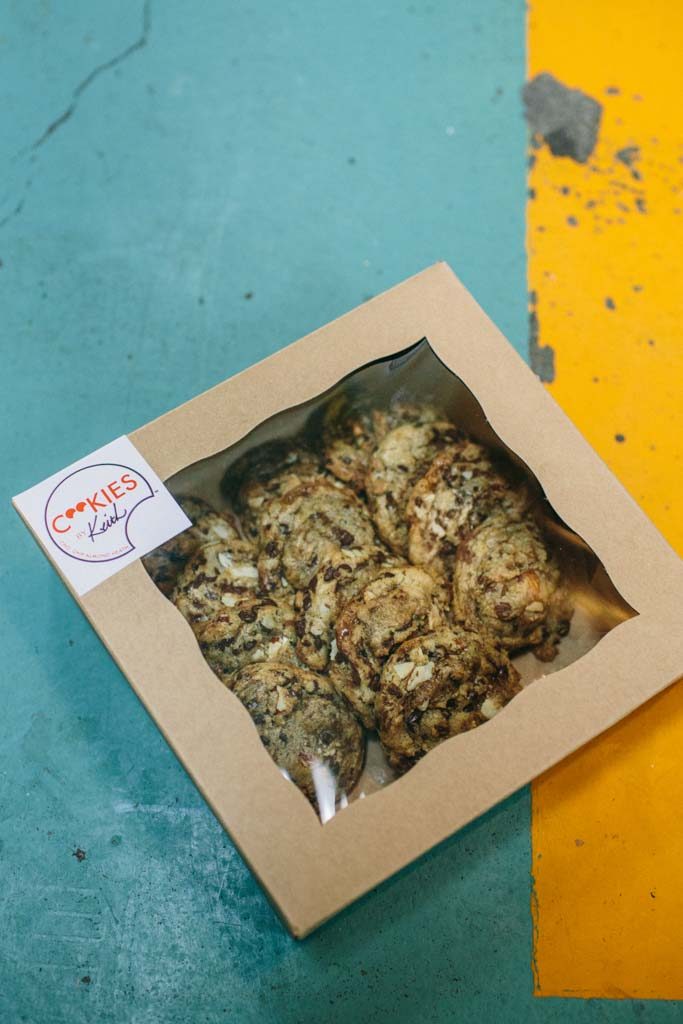 In January 2015, he started in earnest, calling his confections Cookies by Keith. At first he would drive the cookies all around town, handdelivering each batch. Soon after, he got in touch with a friend of his from college who owned a store in DC. Keith sent her some cookies, but by the time she knew they had arrived, her employees had eaten every last one. “She put her order in that same day,” Keith smiles.

Everybody who tastes one of Keith’s cookies seems to go out and tell three more people, which has helped spread the word fast. Keith now ships cookies to customers outside of Nashville as well, but he still personally delivers local orders when he gets off work. This year he wants to expand even further. “Before the year’s up, I plan on having a store to sell cookies, and I want to move to shipping frozen cookie dough out of state so people can get the out of-the-oven taste of the cookies.”

I ask how he’ll have time to keep things running at the Martha O’Bryan Center when he’s also juggling a cookie shop on the side, but he doesn’t seem concerned. “The center is in my heart; I want to keep giving them my talents . . . If it ever gets to [where I have to give it up], I’m going to make sure that there’s someone here who can take the lead.” 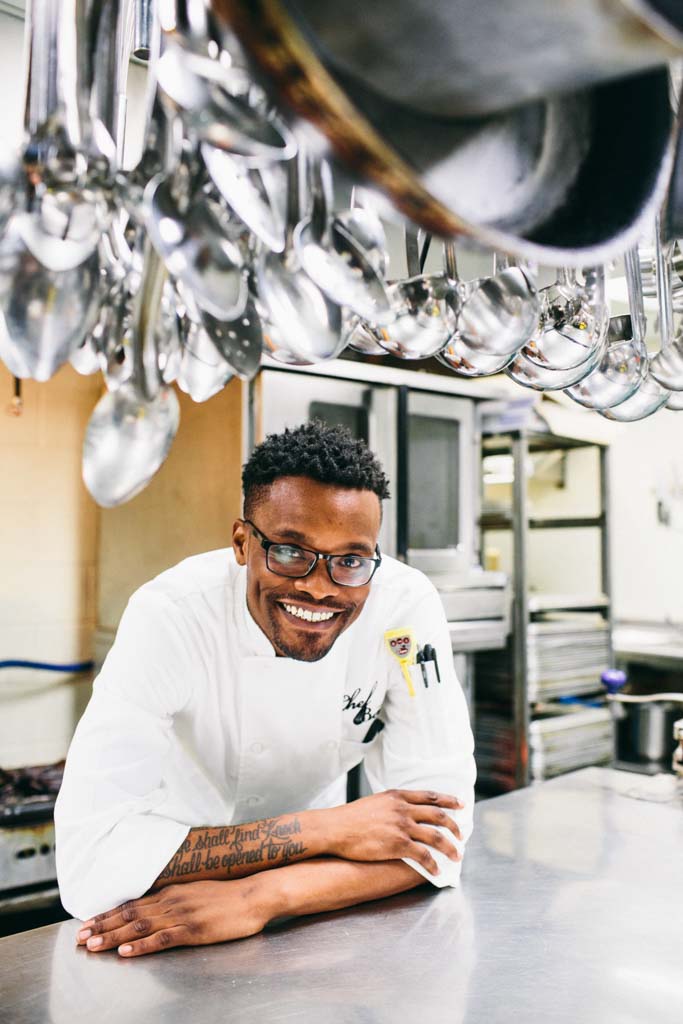 Finally, we decide it’s time to bake some cookies. We round the corner from Keith’s office into the center’s relatively spacious older kitchen. Keith scoops out perfect little dough balls from the batter he mixed earlier, flips a switch on the bottom of the oven, and slides the baking sheet in. We wait seven minutes, then he swings open the oven door, turns the tray around, and closes it back up again. Seven more minutes pass. Finally, out they come—a golden-brown batch of the ChocolateChip-Heath-Almond cookies I’ve heard so much about.

We try to wait for them to cool but don’t get very far. Mine falls apart in my hands but tastes like gooey, chocolatey heaven. “It melts in your mouth,” Keith says, pleased with his work. “I wanted every bite that you take . . . to make sure that you got every ingredient.” I ask if there’s any proper way to eat a cookie, but he shakes his head. “Dip it in some milk and just eat it.” Can do