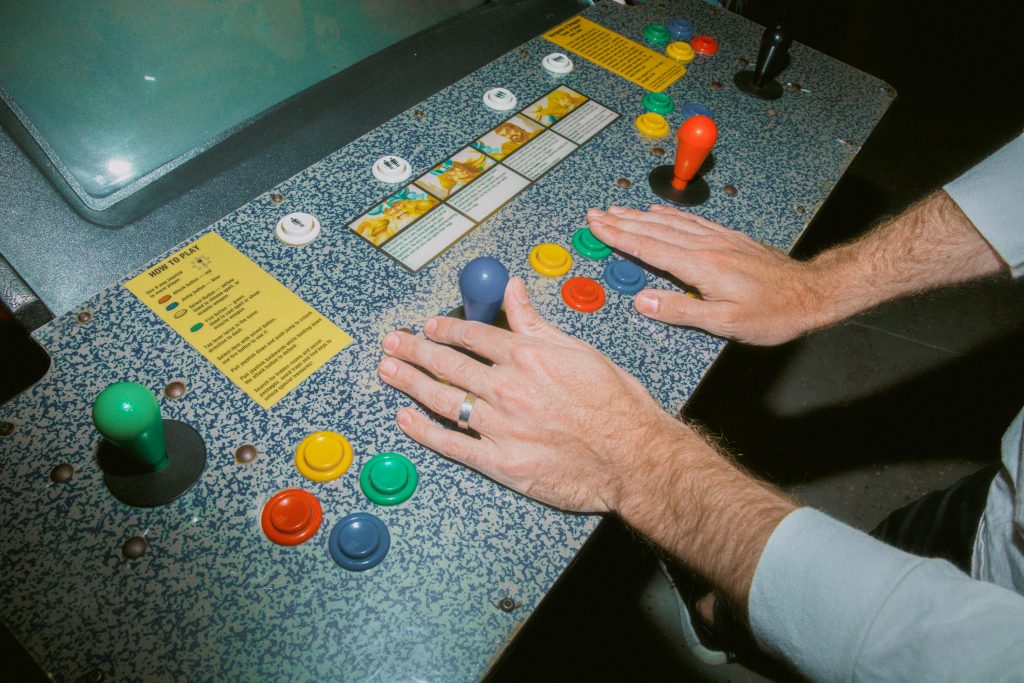 When we meet, Hawkins is barefoot, wearing a loose, gray T-shirt and a slim pair of black joggers. He has a buzz cut and a stubble beard of similar length. We are sitting in his studio in the basement of his home in White Bridge, with Richland Creek to our back. There’s a gaggle of computer monitors, keyboards, and instruments strewn across his large wooden desk. I’m sitting on the couch petting Hudson, his tranquil King Charles Spaniel.

Hawkins, an electronic and pop music producer, is perhaps better known by his stage name, Super Duper. He was born and raised in Knoxville and graduated from MTSU with a degree in audio production. After a three-year stint in New York post-graduation producing music for ads, he moved back to Tennessee—this time to Nashville—in 2012 with his wife.

The couple, now married almost seven years, initially settled in Bellevue, but opted to move because, as Hawkins puts it, you never go on a date night in Bellevue. Hawkins knew he wanted to stay west of downtown Nashville, though.

That is a familiar space for Hawkins, who had to self-motivate and catch up to his peers in the early chapters of his musical career. He was not raised in a rich musical scene like the one he currently lives in.

“I tried to collaborate with people, but it was Knoxville,” he says with a shrug. “There’s not any culture. There’s like seven Chick-fil-A’s there.” 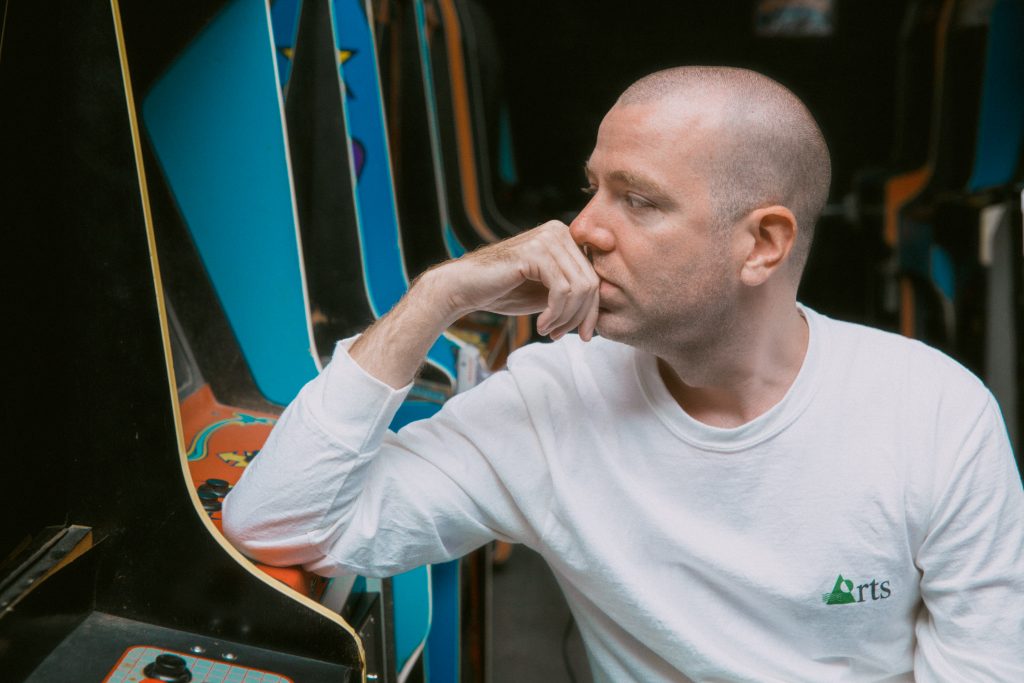 Hawkins did not grow up playing any instruments. He was more interested in graphic design and drawing. Then he came across a beat-making program called Fruity Loops, which many hip-hop producers use to this day. Hawkins started producing tracks—terrible ones, he admits—and slowly found his sound.

“I didn’t even know what a key was, or even what a snare drum was,” he says. “But I started taking piano lessons and got a little bit of theory and understanding of what the heck I was doing.”

Still, he says he was far behind a lot of his classmates once he got to college.

“I remember my first week at MTSU, all the people that were there were really skilled musicians or producers. I didn’t even have a keyboard,” Hawkins says. “I was drawing in notes with the mouse. The back door is where I was going into the music production world.”

His motto? “Fake it till you make it, man.” But even if he feels that he bamboozled his way into becoming a producer, Hawkins more than made up for it when he was with Robot Repair, the New York music, sound design, and licensing company where he made music for commercials.

“It was a very small company, so they needed all hands on deck. I got thrown into the deep end again, every single day having to create tracks,” Hawkins says. To make matters more challenging, there was hardly any continuity in the music he was making. One day it’s a classical song in the vein of Danny Elfman. The next it’s a rock song for a sports car commercial. The constant shifting was an exercise in discipline as well as experimentation for Hawkins, who says he didn’t have a lot of time to explore music beyond the confines of the classroom at MTSU.

Pinballing from genre to genre to meet the demands of clients eventually proved tiring, especially since Hawkins was often proud of the work that was being altered, or worse, scrapped.

“If you have any connection to the music you’re creating,” Hawkins says of working in commercial music, “then it’s going to be tough.” 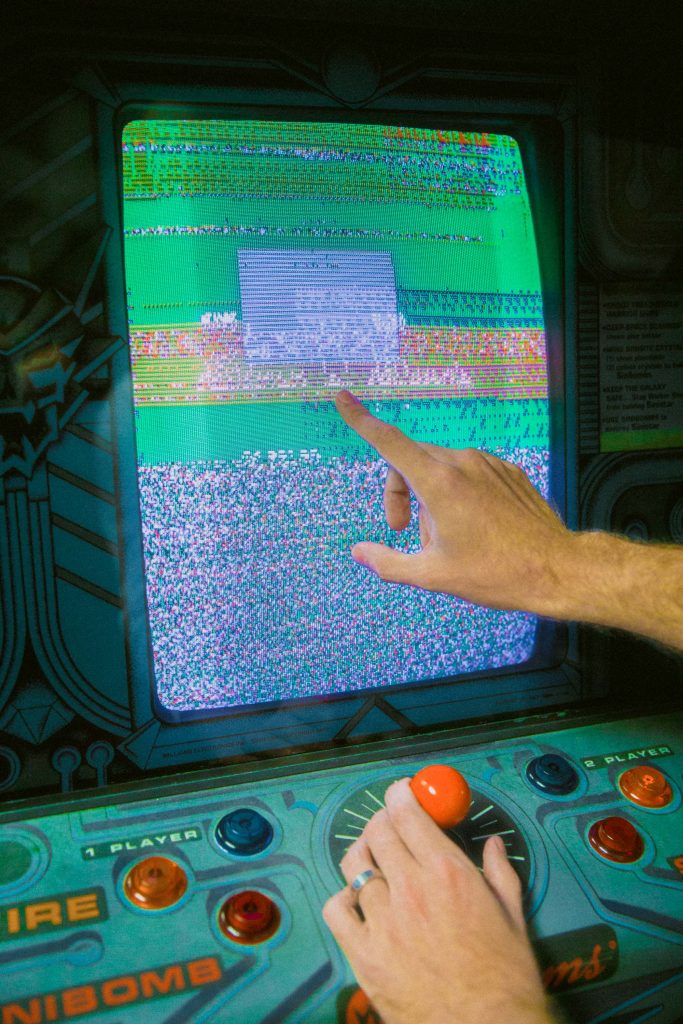 The Mad Men fan in me is reminded of the quintessential Don Draper philosophy of giving clients what they need disguised as what they asked for. I guess it’s not as easy as Jon Hamm makes it look.

“I remember one specific conversation. I was working on a Christmas commercial for Lexus, and a guy was like, ‘What would it sound like if Radiohead did Jingle Bells?’” Hawkins recounts in his best Liverpool accent. “And I was like, ‘First of all, they wouldn’t do it, so where we’re going is going to be disaster.’ But little things like that were killing me.”

And so he and his wife, both homesick, came back to Tennessee. He says he called every musician he knew that wasn’t a country artist in hopes of collaborating. In 2012, that wasn’t as many as it is now.

“The pop scene is definitely growing,” Hawkins says. “I feel like I’ve seen it almost from the beginning to where it’s at now. People think Nashville will never be a pop town. Maybe it will take a long time to prove them wrong, but for me, I want to stay put and see it through, because I’d rather be on the edge of something than go to L.A. and bust my butt and hustle.” 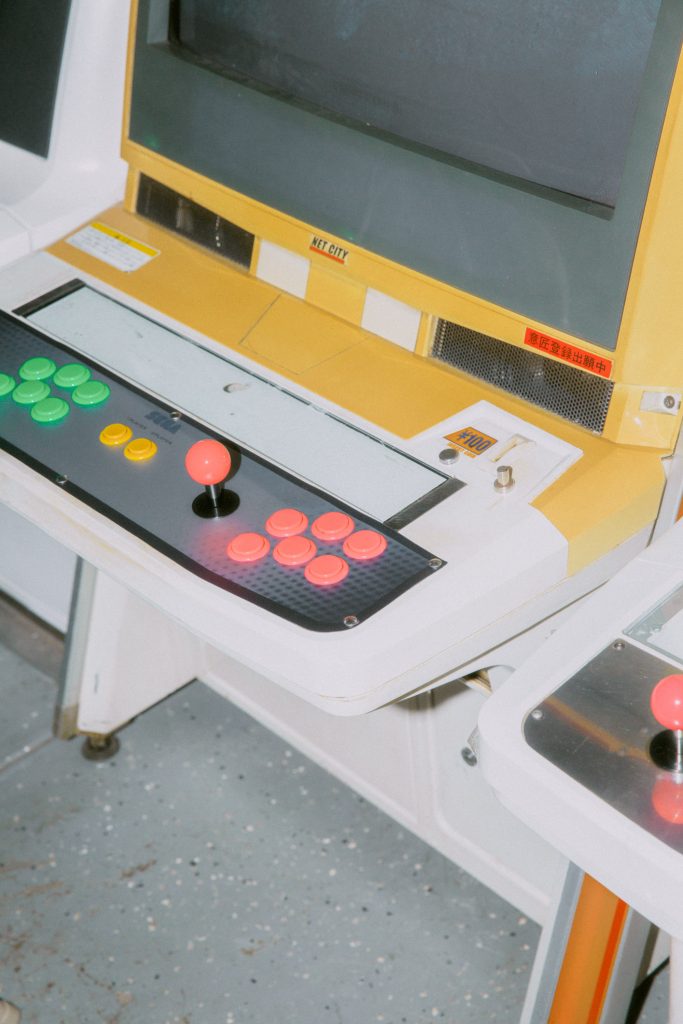 My conversation with Hawkins is reminiscent of my interview with writer-director Motke Dapp (in Issue 70 of NATIVE). Dapp, who also spent his formative years in Knoxville, spoke passionately about his desire to build something in Nashville as opposed to joining the already flourishing film industry in Los Angeles. Hawkins is the same way with the pop and electronic music scene.

He’s certainly on the right track, both as a producer and artist. Hawkins’ latest EP, VHS, was released in February of this year, and the streaming numbers are through the roof. His most popular single from the EP has more than two million plays on Spotify.

While the streaming numbers are encouraging, Hawkins wants to connect with listeners on a more personal level. He needs reassurance that he didn’t hoodwink his way to securing millions of plays because of some lucky Spotify or SoundCloud algorithm. And while the music community is far more communal in Nashville than in a place like New York, Hawkins wants to expect more than just friends in the crowds of his shows—he believes the average consumer is not as curious about local music as local musicians are. Thankfully, artists like friend and collaborator R.LUM.R (Super Duper produced R.LUM.R’s smash “Frustrated”) are changing that. “He has actual fans at his shows,” Hawkins says. “It’s not just, like, the homies of the pop scene.” 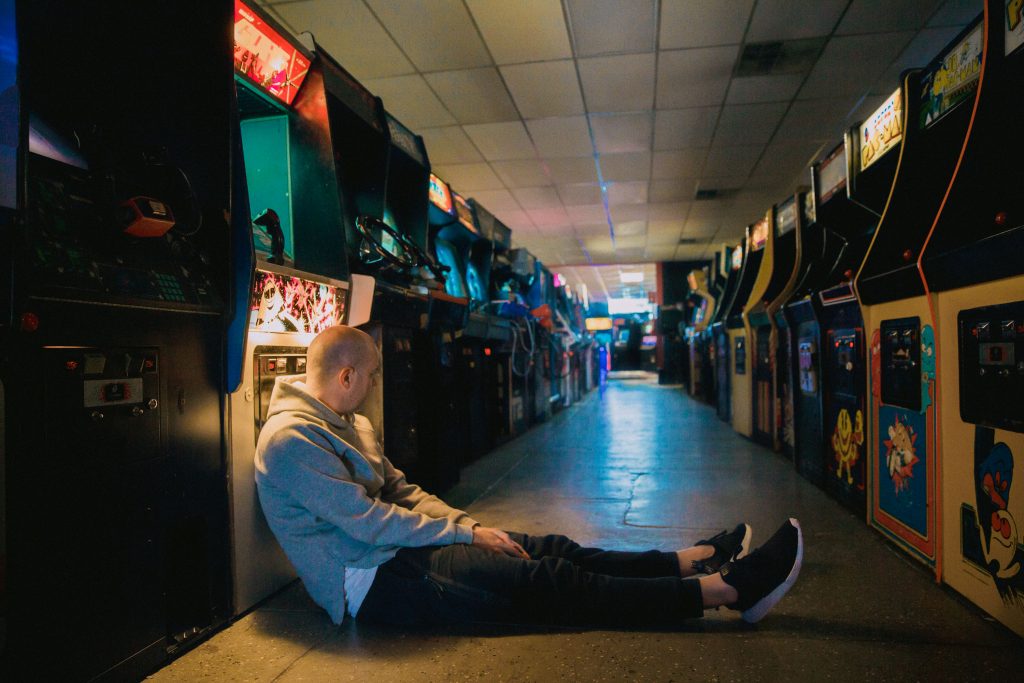 When he produces for other artists, Hawkins says he can be a bit of a pusher, which is hard to believe considering how casual our conversation is. He likes to leave a thumbprint, a musical calling card. When I ask him to describe that signature sound, he immediately says emotional.

“But that sounds downtempo and moody,” Hawkins counters. “And a lot of my songs are energetic. I would say fun, emotional music. And I know that sounds like an oxymoron. I’m trying to ride that line between something big and emotional that also has that groove to it.”

VHS’s success was a relief for Hawkins, who views the project as a risk in many ways. He describes the EP as somewhat of a concept album, and it’s easy to understand why. VHS is about fifteen minutes start to finish. There are no features or crazy drops. Instead, the tracks drip with nostalgia, the late ’80s and early ’90s synths and drum loops that are increasingly de rigueur, from M83 to Blood Orange to Stranger Things. Even the title VHS conjures up memories of video stores, rewinding tapes, and home movies. 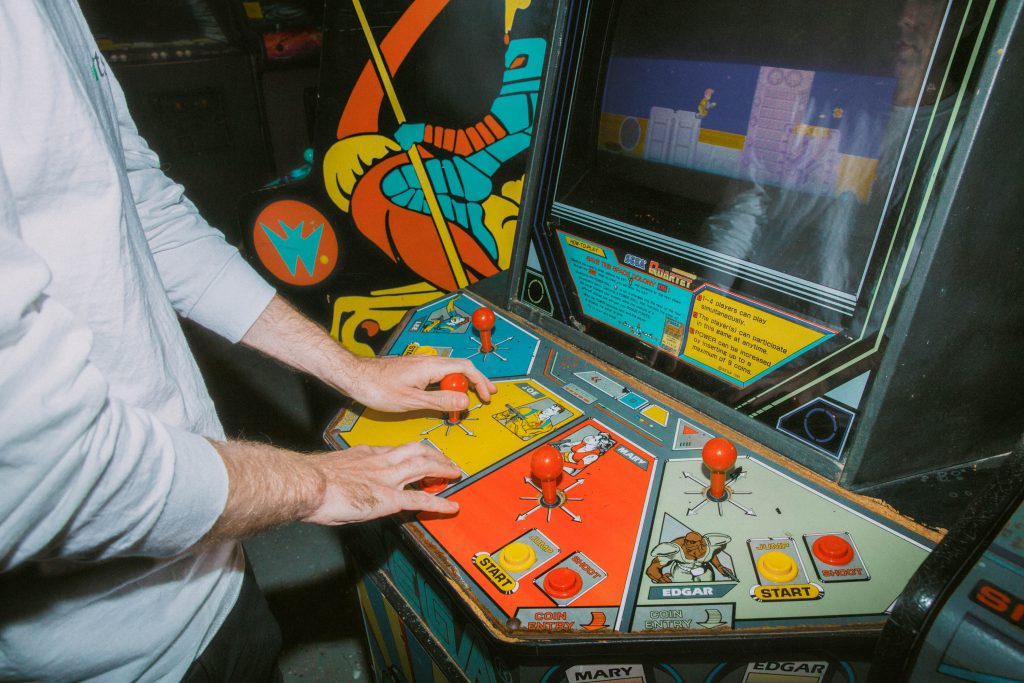 Hawkins knows his music takes listeners back to a specific time and space. But it can sometimes be challenging for artists to look forward when their style honors the past—there’s a fine line between inspiration and imitation. Hawkins walks it gracefully.

“I didn’t hear ‘Everybody Wants to Rule the World’ on the radio, so I’m trying to find some sounds more unique to me,” he says.

Despite nailing that sound, challenges remain for Hawkins. Finding local fans for a specifically curated, niche sound is sometimes a thankless part of the job, especially as the electronic scene becomes more saturated every day. But Hawkins doesn’t believe the outlook is too grim. He’s comforted by the fact that ODESZA sold out Marathon Music Works in 2015; he knows the fans are in Nashville. Now the mission is getting them to his shows.

“The important thing is just to find the right people and develop a story,” he says. “No matter what kind of music you do, there’s a fan for it. I just need to make sure I find those fans.”

Super Duper will tour with Petit Biscuit in the fall. His latest EP, VHS, is out now.