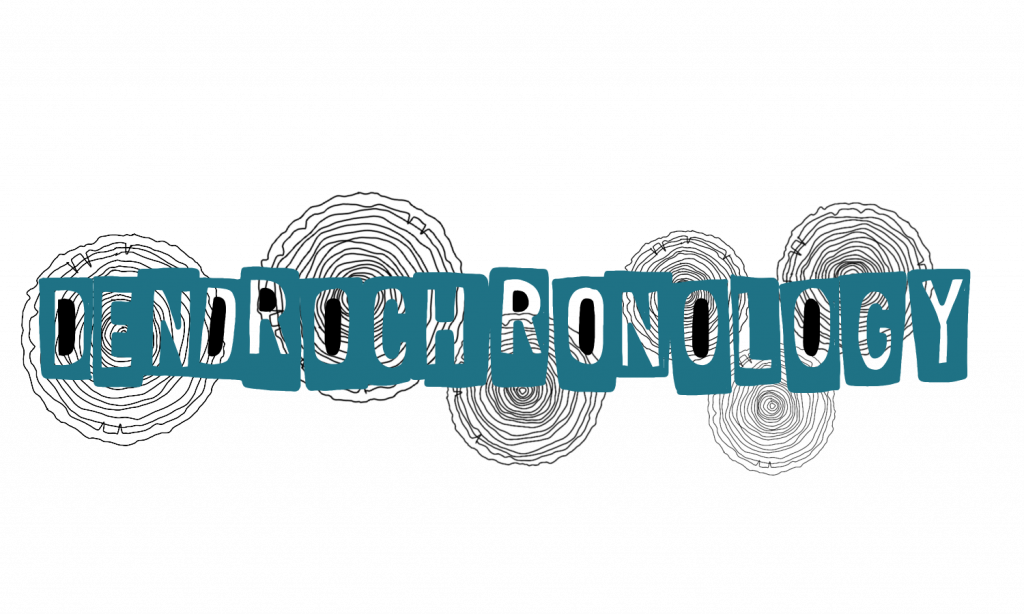 If a tree falls in a forest and no one is around to hear it, does it make a sound? Sound or no sound, there’s a story bound up in the fibers of the fallen tree. At some point in your life you probably learned that you could count tree rings to figure out the age of a tree. Your teacher probably neglected to tell you that there is much more to glean from a tree’s rings than its age. Some scientists make tree rings their life’s work. These dendrochronologists scrutinize the small clues ingrained in the heartwood to reconstruct the history of the tree and its environment. Before delving into the tales that tree rings tell, a quick biology primer is in order.

Imagine a cross section of a trunk. The outer layer is the bark. Beneath it is the phloem, a kind of vascular tissue that transports food down from the leaves and will turn into bark when it dies. One layer deeper than the phloem is the cambium, which produces the phloem above it and the xylem below it. Xylem is the other kind of vascular tissue that carries water and nutrients up from the roots. As the tree ages, this xylem tissue dies, but instead of getting pushed to the outer layers like the phloem, it remains where it is and gives the tree its structure. When you’re looking at tree rings, you’re looking at old, dead xylem tissue. Lastly, a close look at the xylem reveals a lighter and darker portion of each ring. These are the earlywood and latewood, respectively.

Dendrochronologists use tree rings to better understand forest structure through time. For instance, in the Southern Appalachians, dendrochronologists found oak and pine species that were several hundred years old, but few younger than one hundred. In the same place, they found a large number of maples and beech younger than one hundred, but few that were older. It appears that a forest that was once dominated by oak and pine in certain areas is on its way to becoming a forest dominated by maple and beech trees. The question then becomes: What caused this? This timing aligns with the history of fire in the US. Some trees, like certain oaks and pines, are well adapted to survive fire, but others, like maple and beech, are not.

Fire leaves scars on the xylem of trees, and researchers can deduce how frequently blazes swept through a given area by studying these scars. Further, by examining the position of the fire scar in relation to the earlywood and latewood, it is possible to determine the season of the fire. This is important for land managers who conduct controlled burns as a conservation practice, as it shows that one season may be better than another for conducting a burn.

In addition to examining fire scarring, dendrochronologists also look to the width of tree rings for environmental analysis. In dendroclimatology, a subfield of dendrochronology, researchers correlate tree ring widths with climate variables of the region (e.g. temperature or precipitation). If there is a strong correlation between the ring width and the climate variables, then the past climate can be reconstructed as far back as the tree ring age data extends. A similar method can be used to better understand streamflow over time.

There are a number of other ways we can call upon tree rings to help elucidate the past, from erosion patterns in a stream channel to timing insect outbreaks—it can even help determine when historical dwellings were built. Here’s a Music City–friendly application of dendrochronology: The Messiah Stradivarius violin, completed in 1716, is thought to be one of Antonio Stradivari’s finest works and is now worth millions of dollars. However, there were questions about its authenticity at one point. Henri Grissino-Mayer, a dendrochronologist at the University of Tennessee, and a team of researchers were able to analyze the rings in the Messiah and compare it with other tree ring data sets in Europe to determine that the last rings in the instrument dated to 1687. While this doesn’t prove that the violin is a Stradivari original, it at least demonstrated that the instrument was not made with wood that post-dated his death. The spruce from which the Messiah was crafted may not have made a sound when it fell, but it certainly sang many a song after its death.