I live up in Whites Creek with a good ole dog and a tiny cat. My fiction has appeared in The Magazine of Fantasy & Science Fiction and Apex Magazine, among other places. I’m the author of A City of Ghosts and The Wolf’s Bane. My nonfiction work has appeared in the Nashville Scene and The Washington Post. I’m currently working on an afghan made with yarn I dyed with stuff in my life—my life is mostly weeds and Kool-Aid, it turns out. I’m also working on a nonfiction book about three unsolved bombings that targeted integrationists here in Nashville in the late 1950s/early 1960s. Spoiler alert: Racists did it.

When the time came to pick three stories for Jesus Crawdad Death, my chapbook with Third Man Books, my goal was to try to showcase all the different kinds of stories I write—funny, dark and weird, beautiful, and a little sad. I ended up with three stories about revenge. It wasn’t on purpose, but I guess I’m just feeling angry and helpless lately.

“Jesus Has Forgiven Me. Why Can’t You?” is based on true events. Everything that makes me look like a dumbass really happened. The part where I triumph in the end, sadly, did not. At least, not yet.

The following is an excerpt from “Jesus Has Forgiven Me. Why Can’t You?”, one of three short stories from Phillips’ Jesus Crawdad Death. Earlier in the story, the narrator finds out her significant other—a religious, amateur wrestler named Larry—has a wife and children. In this scene, the narrator teams up with Jesus to battle against Larry in a tag-team wrestling match.

Jesus’s outfit is similar to mine, except that He’s in silver from head to foot. I shouldn’t say this, probably, but the metallic sheen of His outfit gives Him the look of a walking fire hydrant. I wonder if He’d look better with a cape.

We hung out in the locker room through the first three matches and then we were up. When I heard the announcer say our names, I vowed to never let Jesus pick our tag-team names again. The Power and The Glory. I wanted to be The Millersville Mystery. That’s a good, old-timey wrestling name. Right? But I was stuck with The Power.

The match was ordinary for the first part. I was in first, against Hanging Jack, who was a good six inches taller than me, which put him a whole foot over Jesus. Hanging Jack was pushing fifty and had been wrestling forever, so being in the ring with him was more like dancing than fighting. He’d pull me to him, whisper our next move. Then, if I was supposed to run into the ropes and use the momentum to clothesline him, when my outstretched arm reached his chest, he would crumple so expertly it looked as if he’d been hit by a train instead of barely touched by me. When it was my turn to suffer, when it had to look like he was about to pin me and he rolled me way up on my shoulders, he slipped his arm under my back to give me a little more support. When I kicked out, he moved away from me as easily as a dancer avoids his spinning partner. 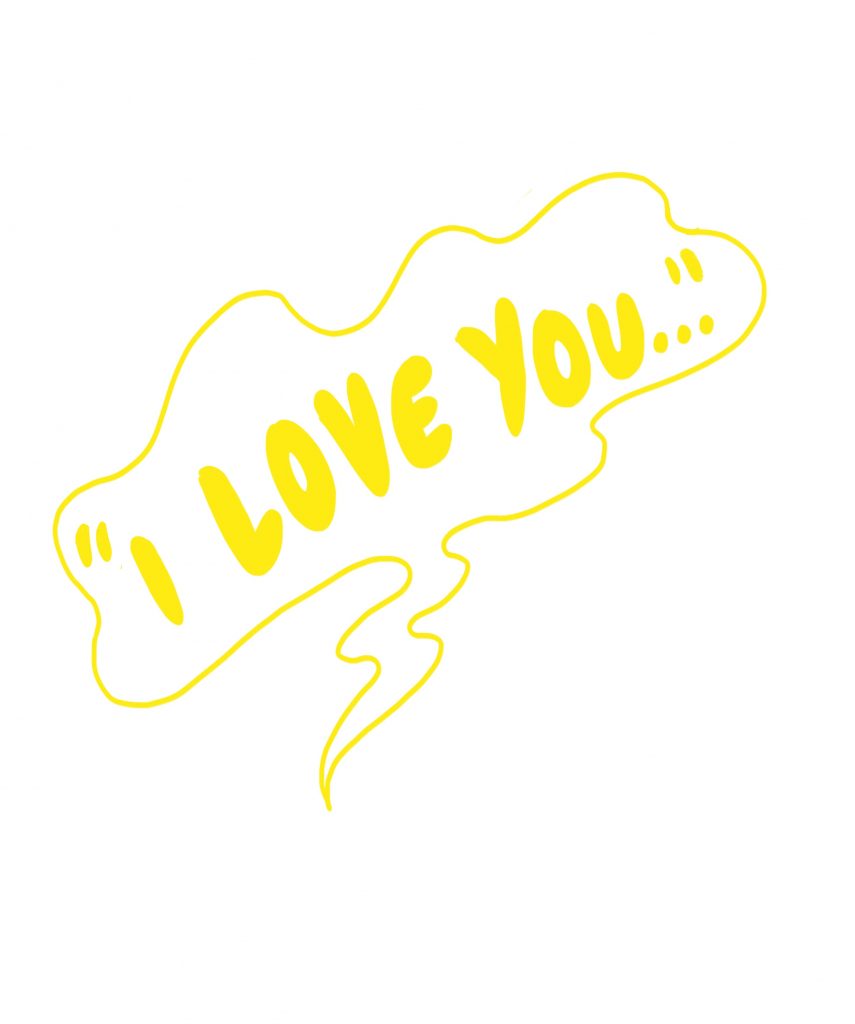 After that, I tagged Jesus in. He and Hanging Jack did their thing for a few minutes and then there they were, face to face, Jesus and Larry. At first, I didn’t see anything out of the ordinary. Kick, stomp, spear, clothesline, one’s down, then the other, then the first, repeat. But when they’re on the ropes by me, I heard Larry plain as day saying, “Okay, you flip me over your back next, and I’ll sit down and pull you over mine.”

Jesus answered, “I love you.”

I saw Larry shake his head, just a slight movement, like he almost didn’t mean to make it. He thought Jesus was trying to rattle him. And maybe He was. Every time the two men put their heads together, Jesus would say to Larry, “I love you.”

I was trying to concentrate on what was going on in the ring, because even though it’s all planned out, things can go wrong. You have to watch. But still, I stole a glance at the audience to see what they were making of it. They looked only half-interested. I imagine the loss of local boys to root for had soured their feelings on the match. They didn’t appear to notice the proclamations of love coming from Jesus.

Now, the end of the match was tricky. It called for all four of us to be in the ring together. Larry and Hanging Jack were supposed to be ganging up on Jesus, both whaling on him while the ref is distracted or out cold or something. I forget. It doesn’t matter. The point is, that’s when I do my thing. Everyone’s back is to me and I climb up on the top ropes in the corner and launch myself onto the two men pummeling my partner. But then I’m supposed to act like I’m knocked unconscious and Hanging Jack will pin me for the win. Finally, I’ll unmask myself and Larry will see that it’s me, which will prove . . . what, exactly? I don’t know. Honestly. “Ha-ha, you beat me,” isn’t much of a victory speech. 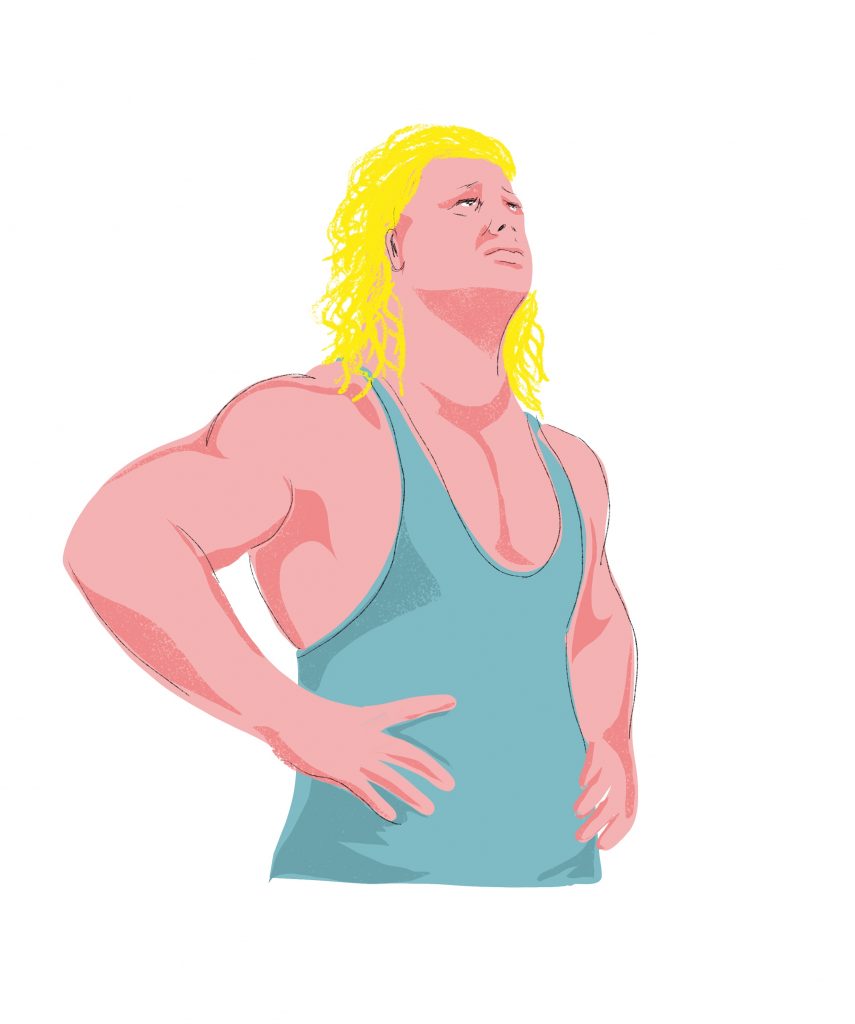 Okay, so it starts off according to plan. The ref is not in the picture. Larry and Hanging Jack are beating up on Jesus. I’m climbing the ropes from the outside of the ring. The crowd is actually paying attention. The little kids down front are straining to see what’s coming next.

Just as I’m stepping onto the second rope, I see Jesus lean in and whisper to Larry. I think we all know what. And then I’m pulling myself up onto the top rope, precariously balancing as it shifts back and forth under my weight. Larry pulls away from Jesus and says, loudly, “Shut up, you fucking faggot.” The crowd goes nuts. Some of them are cheering, some of them are booing. A plastic cup whizzes by my head and hits Hanging Jack in the back. It’s about to turn ugly. I still have one hand on the rope. I could just climb back down.

But I stand up, just as Jesus removes His mask. And now a hush falls over the whole place and, since Larry’s half-facing me, I can see that he’s in mortal terror. He is what the Bible calls “sore afraid.”

Is Jesus going to smite him? Do the whole crowd like that fig tree? Everyone is waiting to see. 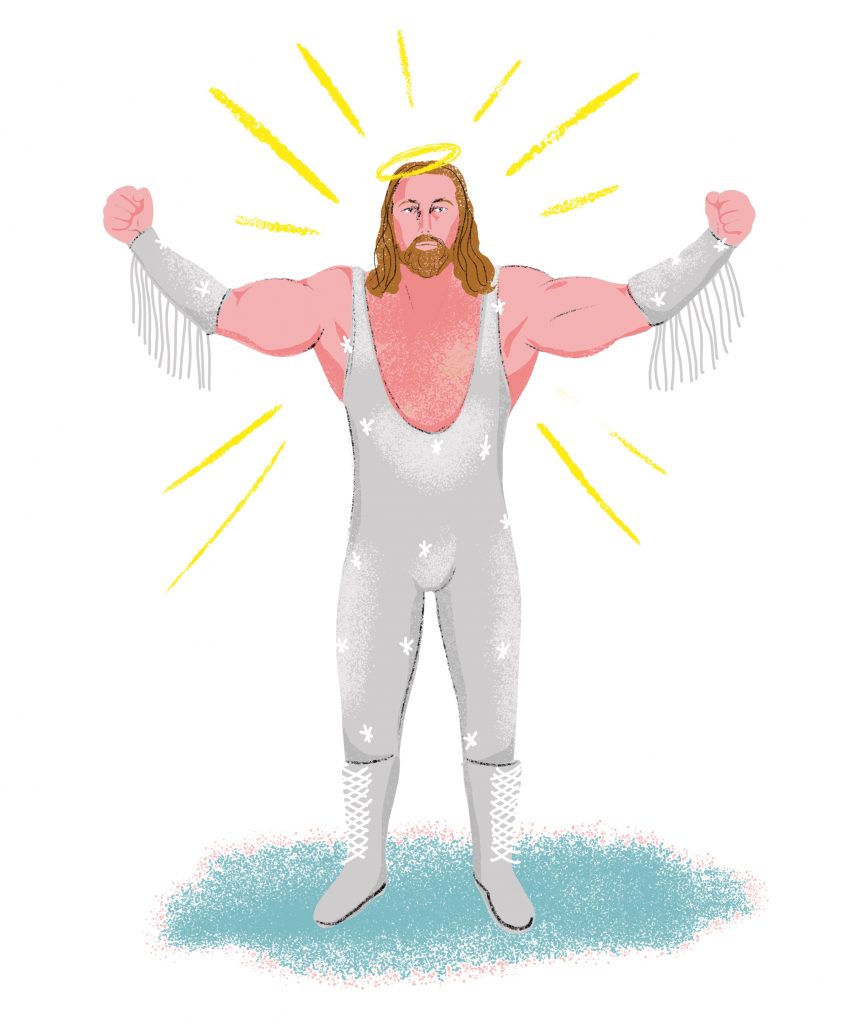 I bend my knees, just slightly, and push off. Every inch I’m crossing as I fly through the air seems to take five minutes to go by. I am the highest person in this building and, from this perspective, I can see everything. I see a look of disappointment on Hanging Jack’s face. I see the swallow perched on the scoreboard at the far end of the gym. There are two girls in the crowd, one with new braces, the other with a black eye, who are sharing a bag of popcorn. Larry’s wife is sitting in the middle of the bleachers, her hair like a golden halo, and she’s crying. So is the tiny baby. I realize that Larry doesn’t know what love is. Not when it’s his Lord and Savior whispering in his ear. Not when it’s his wife giving him beautiful children. Not when it’s me, believing in some best, fake version of him. And if he doesn’t know what love is, then he doesn’t know what it even means to be sorry. Not really.

That’s what I think as I’m slowly, so slowly, floating over toward him. I see every detail of him, his dishwater-blond hair hanging loose, his stormy hazel eyes, that scar on his shoulder that could be road rash, could be a burn, the confused look as he realizes the match isn’t over, that I’m still coming. He turns instinctively toward me, reaches out to break my fall, and I slam into him. We tumble to the mat. Someone’s supposed to pin me. I’m sure of that. But no one else in the ring makes a move. So I just lay across him, still out of breath from the force of my landing. Eventually, the bell rings, so I guess I won.

Larry’s still laying there, sprawled in the middle of the mat, with his eyes shut, like he wishes he could just die. Poor guy, so many theological problems and his pastor is nowhere in sight. So I put my lips right by his ears and whisper, “It’s not the end of the world. At least now you really do have something to apologize to Jesus for.” And then I take off my mask and he sees that it’s me. He sees me.