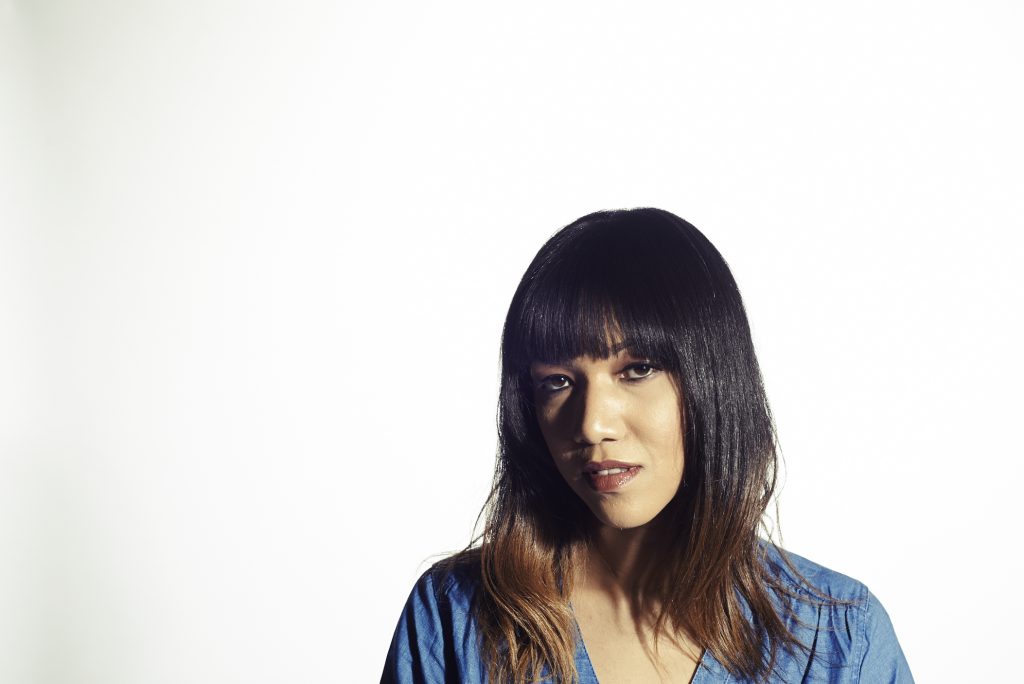 Tiana Clark is a Pushcart Prize nominee living and performing poetry in Nashville, Tennessee. As an LA transplant, she attended Hume-Fogg High School and graduated from Tennessee State University. She serves on the board of The Porch Writer’s Collective, a local literary arts center. Her poems have appeared in Southwestern Review, The Raven Chronicles, Nashville Arts Magazine, Word Riot, and forthcoming in Crab Orchard Review. This fall, she will be attending Vanderbilt University’s MFA program in creative writing for poetry. Read more about her at: www.tianaclark.com 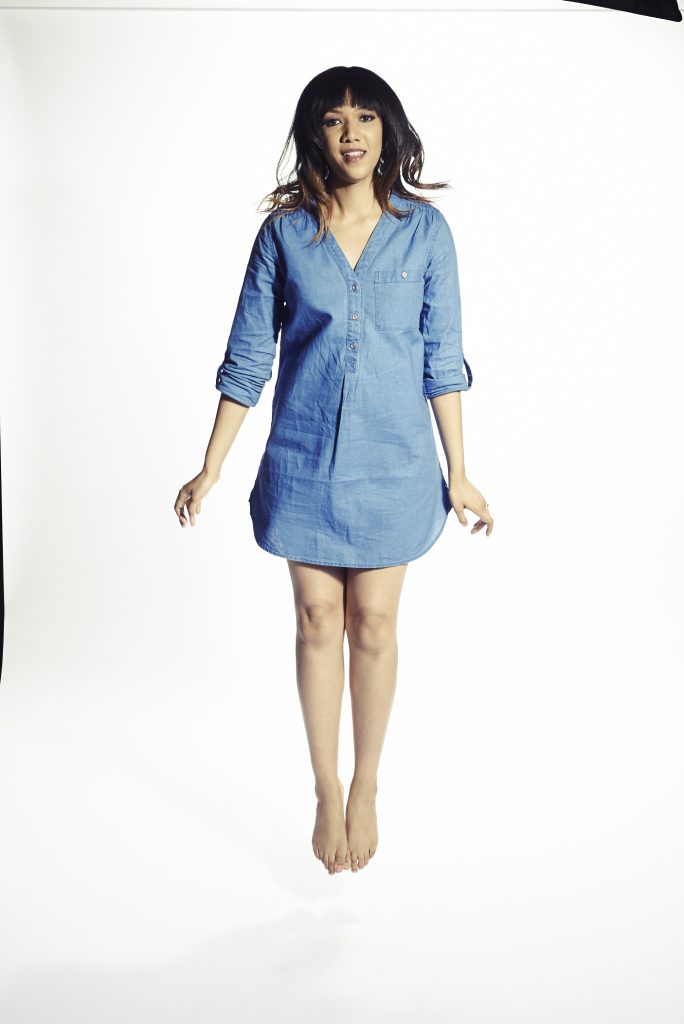 we chanted as children. We believed we could levitate bodies with

our words. Like in my church, when the preacher placed charismatic

fire in the palm of his hands to the crucible of our foreheads. He would

shout Jesus! Blow peppermint-scented breath of Spirit on each face.

The huddled congregation fell like drunken dominoes around the altar,

wriggling on the swivel of spiritual intoxication. They called it

slain in the spirit, consumed by divine ecstasy. I wanted to be the

next ember, feel the singe from God all over my body, except when

the preacher laid his hands on me—I felt nothing, only the dry

heat of his dragon mouth. I wanted to believe their version of Jesus

wouldn’t skip me. So when he tried again, pushing me to a slant—

I gave in. Lying on the carpet, encircled by hysterical laughter and

blissed out faces I cried—I was pretending. Same with the child

chants, Bloody Mary was never in the mirror, and the Ouija boards—

I felt nothing, just fingers guiding toward letters with no message for me.

How we fake to feel the magic inside us. It took me a while to understand

that I didn’t have to beg for it, God was already washing the dust off my feet.

“Magic” originally appeared in Word Riot and has been reprinted here with  permission of the author. 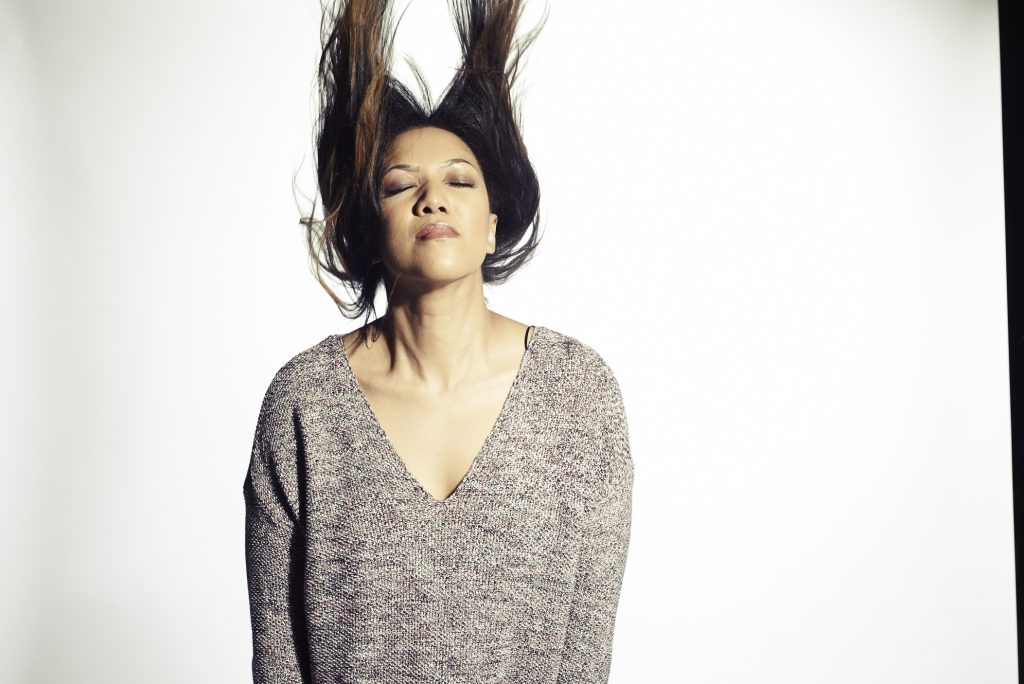 gusto and ten splayed fingers like sea stars to people

I barely knew at a fancy bar with a vintage bowling

alley during a game of Never Have I Ever.

(which it did), but I said my famous sentence flushed

on my fourth drink called THE PINK LADY, because

it got me rowdy—my head: full of soft sea foam,

my body: an ocean of stronger women. I spoke louder

and taller over the music and thunder of bowling ball

wreckage. All the women I wanted to become after

midnight: to be funny and smart, mysterious and

charming, but not too revealing (which failed), to touch

glass as a lover’s smooth cheek, then take a sip like I

would take a mouth in me, slowly. I wanted to notice

how small someone’s ear could be tonight and tell them,

almost in a whisper, while I swayed to the rocking boat

of my own pitching. Yes, all my women were dressed in

black cabaret! My sirens, my muses outlined in spotlight

silhouettes. Oh, how I ocean sprayed these new people

with spit, a wetness that happens in furious conversations.

My lips: a propeller on the back of a motorboat sliced the

deep blue night in waves that slid across the glassy wooden

lanes to crash ashore a body of pins. Our server approached—

I raised my empty glass like a stupid trophy. I’ll have another

Pink Lady! I sung. The women in me are so thirsty, like

gorgeous mermaids I was drowning in their iridescent tow.

That night, everyone was a writer and that’s why I drank

so much, siphoned that rosy gin and simple syrup till dawn.

or worse, nothing at all.  Never have I ever been so unsure. 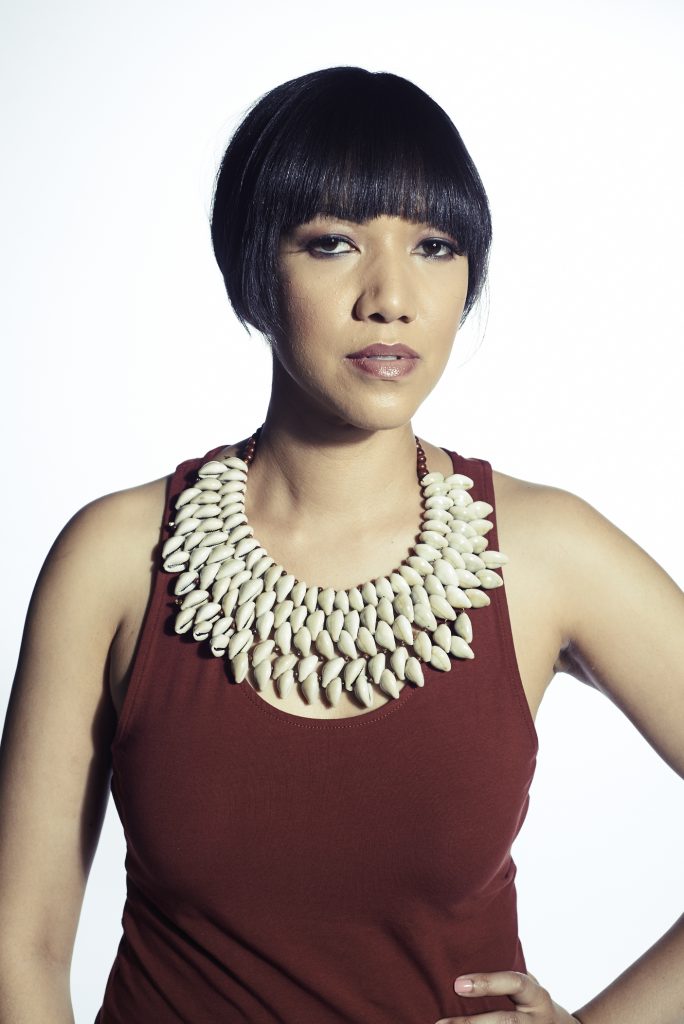 And there it was, as if the serpent was there himself, leading us

Playboy magazines by a tree. What possessed our nine-year-old

fingers to delicately turn the pages and stare at naked women?

Huddled like football players, our February breath combined into

a low hanging cumulus cloud, or maybe it was a cartoon bubble?

We instantly knew to whisper, giggle and shush each other, as we

all fought to stare at our first sexual questions. We wondered

with our prepubescent bodies if our breast buds would bloom

and hang like so; is this what we wanted or what we thought men

would want from us someday? Later that night, in our sleeping bags,

I don’t remember whose idea it was to take off our panties, but we

did and the giggles started again as we wiggled them down our legs.

We didn’t know how to touch ourselves yet; we were all just

fireflies beginning to find our light until my mother came in. One girl

pushed another out of her sleeping bag, debuting our hidden game

with her bare bottom. My confused mother asked for explanations,

except it took me too long to clothe myself. Then she knew, like all

mothers know what their daughters are hiding. She yelled at us to put

our underwear back on. After my confessions, she pulled me to

the back bedroom and punished me, her hand swiping across my body

as she sniped, “What would the other parents think?” A foreshadow

of my mother catching me, then pain followed by crying—the first bite. 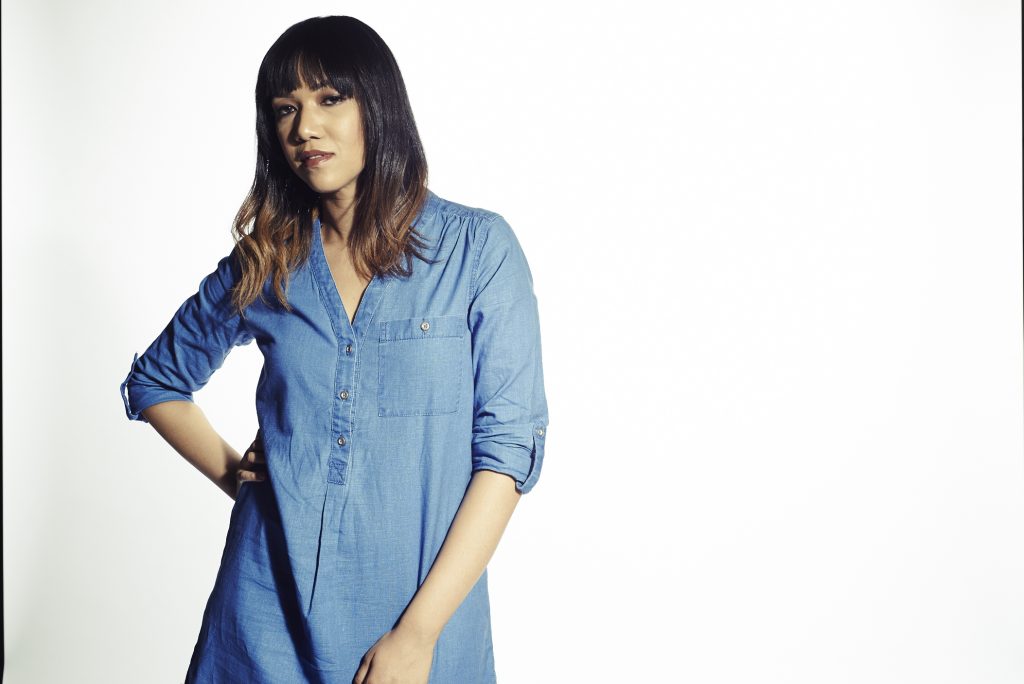 The ghosts of those we’ve loved and lost.

and those who’ve hurt us.

The house is a novel I want to write in chapters.

I lived with a young man in this house—

with his father and the father’s many newspapers,

with his roommate who was always smoking pot

and talking about his ex-wife before I knew how

to live with other men.

The young man was a friend from work, said

I could live in the house for free. My mother had

kicked me out, so I was desperate to believe you

could live with a man for free.

The house is the face of the older Bukowski:

And the Bukowski emotions:

even I simmered something brilliantly mad.

I was the ghost of this house—

lingered behind these men and their daily activities

waited to take my shower till the house was empty.

His father’s incessant wet cough shook in my ears

I waxed the young man’s back in this house,

smoked pot with his roommate while he

talked about his ex-wife for hours and hours,

I yelled and cried and cut myself in this house.

I was its ghost, its prisoner and sex slave—

Bukowski’s cunt: his drink: his cave to absorb

all of that midnight yelling.

I never wanted anyone to visit me, but my friend

Dylan came once. She was a pretty girl with a boy’s

cocaine in the room I shared with this young man.

other—we all wanted to, but we let the throb

of wanting to touch each other be enough.

We approach the end and it reads like the beginning,

with a young girl throwing all of her boyfriend’s

cocaine off the porch into the clasp of January’s dark

shiver, like I was spreading the ashes of someone’s

maybe all of East Nashville

before I even knew what that word meant.

Now, when I pass the blue house on 11th with its

bright renovation on my way to the new, hip spot

for brunch and pay $10 for an Elderflower Mimosa—

I think of the wisp of white powder that suspended

in the air like a spirit being released. Some genie

that granted me a wish to leave this house that 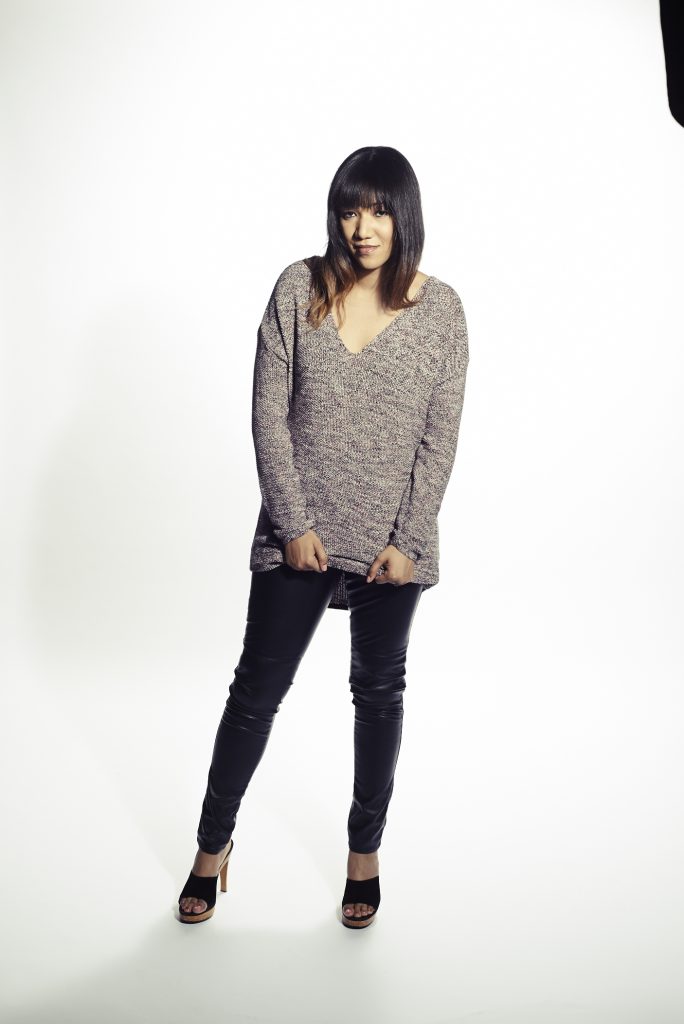 Drugs—even the word pulls like an opening to a cave.

I remember the D.A.R.E. officer that came to our school

with stickers and relatable rap music. Each of us pledged

like Hitler’s youth to never do drugs, but there’s an order

to follow. First, it was cigarettes. Just holding one and you

felt like a Nirvana song was between your fingers, all grunge

and carelessness with plaid, stonewashed jeans slit at the

knees, then smoking your boyfriend’s pot.

Then you find yourself at nineteen in the bathroom stall

and a cut straw out of an empty Bubble Yum wrapper,

snorting white lines off the metal top of tampon receptacle.

The chemical sludge sliding down the back of your throat—

numbing your gums with an index finger laced with chalky

residue. The zing-zap in your brain as your janky jaw pops

side to side when you head up to the hostess stand, taking

the coke wears off.

mafia or Krispy Kreme doughnuts… but once you do it

you get it. Once you do it you get stuck in a loop, like in

one of those trance songs, an itch develops that you need

to preemptively scratch like lifting a needle to the groove

of a record. How we rake the damages of our need across

our life, like a tattoo you cannot see but the memories ink

themselves as Rorschach tests—sometimes it’s a black

but always your damn daddy issues.