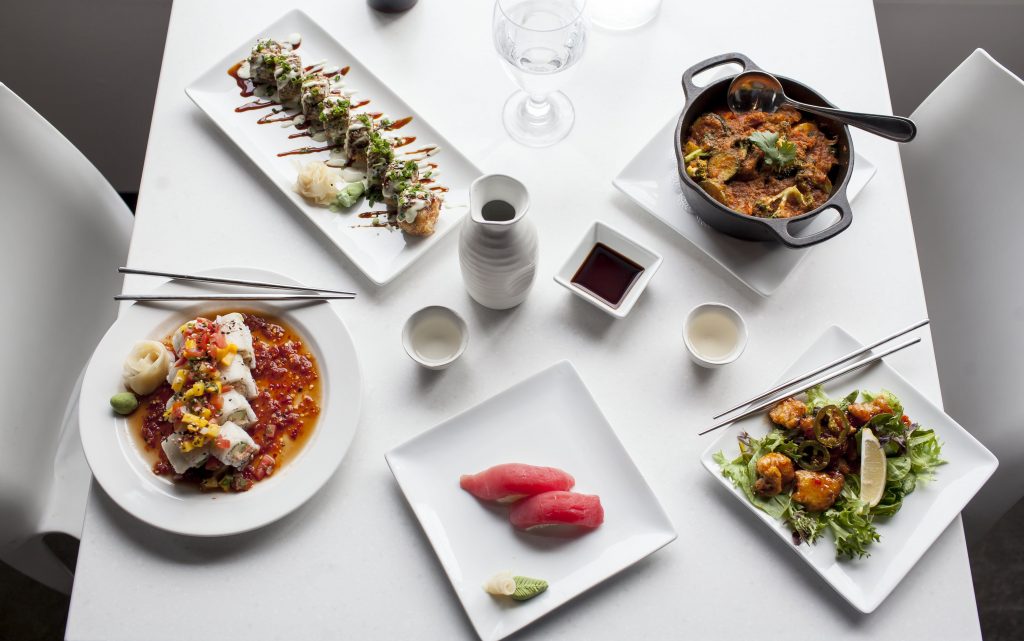 When Thet H. Tint was applying to American universities while living in Yangon, the capital city of Myanmar (formerly Burma), he couldn’t point Nashville out on a map—actually, he had never even heard of it.

The buoyant and easygoing entrepreneur had his heart set on moving to the US with his mother, and thanks to a generous scholarship from Vanderbilt University, he arrived in Middle Tennessee in 2002. He graduated with a degree in microbiology and had big plans to stay the academic course all the way to a PhD program and become a pharmaceutical researcher.

But how did he go from studying for a serious career in medicine to being the owner of a successful restaurant with a silly, om-nomming sushi monster named “Nommy” as its mascot? Tint blames it all on his impatience.

“Here is a crazy story,” he says with a smile.

When Tint finished undergrad, the economy was heading toward a crash, and he decided the pragmatic thing to do before going into years and years of rigorous PhD study would be to just get a job. So he switched gears and attended nursing school at Aquinas College. He was a geriatric nurse for two years and specialized in working with dementia patients. But his restlessness started gnawing at him again. “As soon as I started nursing school, I knew it was not for me. Here’s my problem: I have an issue with authority. It’s so cliché, but trust me, that’s exactly what my problem is. And I hate paperwork,” he says.

So what’s a restless guy with an authority issue to do? Become his own boss, of course.

I have an issue with authority. It’s so cliché, but trust me, that’s exactly what my problem is.

A sushi restaurant was the obvious choice, he explains. His mother had years of experience making sushi for the Mt. Juliet Kroger, but he admits he had zero restaurant experience of his own. Having a mentor could have made things a little easier in the beginning. “I didn’t have one and that was the tough part. There’s a lot of nuance that they don’t tell you about,” he says. “The whole restaurant thing . . . I had no idea. I learned a lot of things the hard way, but I did learn, and I tried to improve so we survived.” His determination eventually paid off, and he opened the first Nomzilla Sushi in a small Edgehill Village space in 2012 as a fast-casual concept.

Perhaps it harkens back to Tint’s laboratory experience, but the Nomzilla way is all about deconstruction and examination. That’s why the first location was centered on a build-your-own sushi roll experience. His concept was a breath of fresh air for sushi fans who usually shied away from traditional rolls because of certain ingredients that were deal breakers. “I’m a picky eater, and I want to make sure I’m doing my best to cater to everybody,” he says.

But as Edgehill Village and the surrounding Music Row neighborhood began to draw more and more attention, Tint came face-to-face with the downside of the Nashville boom: his building changed hands and the rent went up. Way up.

“For about six to seven months, I didn’t know if I was going to have another Nomzilla or not because it was a difficult time to find a suitable location,” he says. But he eventually settled on a large building in East Nashville that he would share with Isaac Beard’s Pepperfire. “This is much better than the old place,” he beams. Nomzilla 2.0 opened in summer 2015 to great excitement from a neighborhood that—at least according to the infamous East Nashville Facebook page—is always looking for more sushi options on their side of the river.

The new dining space is bright and roomy with a clean, modern design. No longer a place where diners build their own rolls at the counter to take on the go, Nomzilla has morphed into a full-service restaurant and bar. Expanded lunch and dinner menus feature everything from house-made gyoza and Japanese fried chicken to kimchi fried rice and inventive desserts like the Panko Fried Brownie. The signature Fire Breathing Roll (made with ghost peppers) is still available, along with a hot chicken sushi collaboration with their neighbors at Pepperfire. Tint is also highly conscious of vegetarians, vegans, and those with gluten intolerances, and he’s made sure to include options for all of them. For someone who couldn’t find Nashville on a map a little over a decade ago, Tint has definitely made a mark on the city’s food scene through his playful personality and accommodating stance on food. 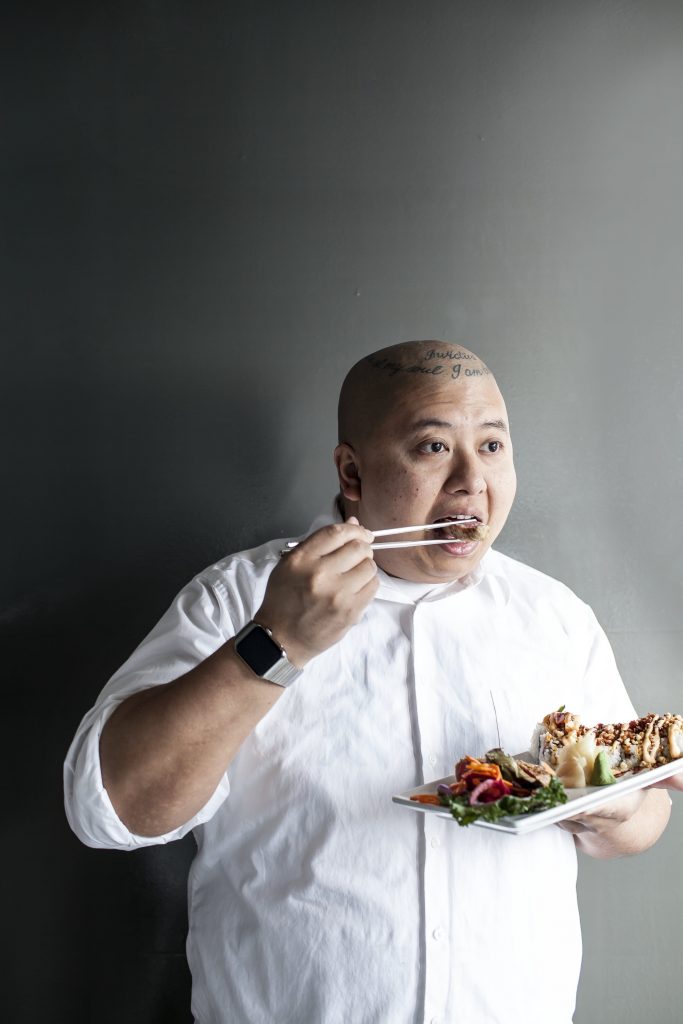 But for all of the positives that have come with his experience of achieving the American dream, I can’t ignore the elephant in the room. With the current political climate and a certain candidate’s heated rhetoric around issues of immigration, what is Tint’s take?

“Let me tell you about the whole thing I’m feeling right now. All these things about police brutality and stuff like that . . . I kind of get almost a PTSD [feeling] because in the country where I came from, that is the norm. It’s kind of sad that we’re seeing that in this country where everything is supposed to be perfect. Before we emigrated here, we had kind of an idealized view of America. It’s not what we thought it [was],” he says. “I blame the education system, it’s not effective anymore. It’s more about politics than actually making the country better. Maybe I just have this view because I come from a different country and I have an outsider’s view.”

But Tint makes an effort not to get bogged down with the recent negativity. Even though he’s come to see the country’s flaws, he still thinks America is great. He’s hopeful that the future will be brighter, and he’s bolstered by his experience as an immigrant in Nashville. “It’s the South. If you’re nice to people, they’re nice to you,” he says. The city’s high immigrant population, which helped him not feel like the only outsider, combined with Southern hospitality and Nashville’s more recent boom, have made it an ideal place for Tint’s business to flourish. You won’t find him railing about Nashville’s transplants; instead, he welcomes them with open arms, just like the city welcomed him more than a decade ago. More people in the neighborhood means more people to share food with. 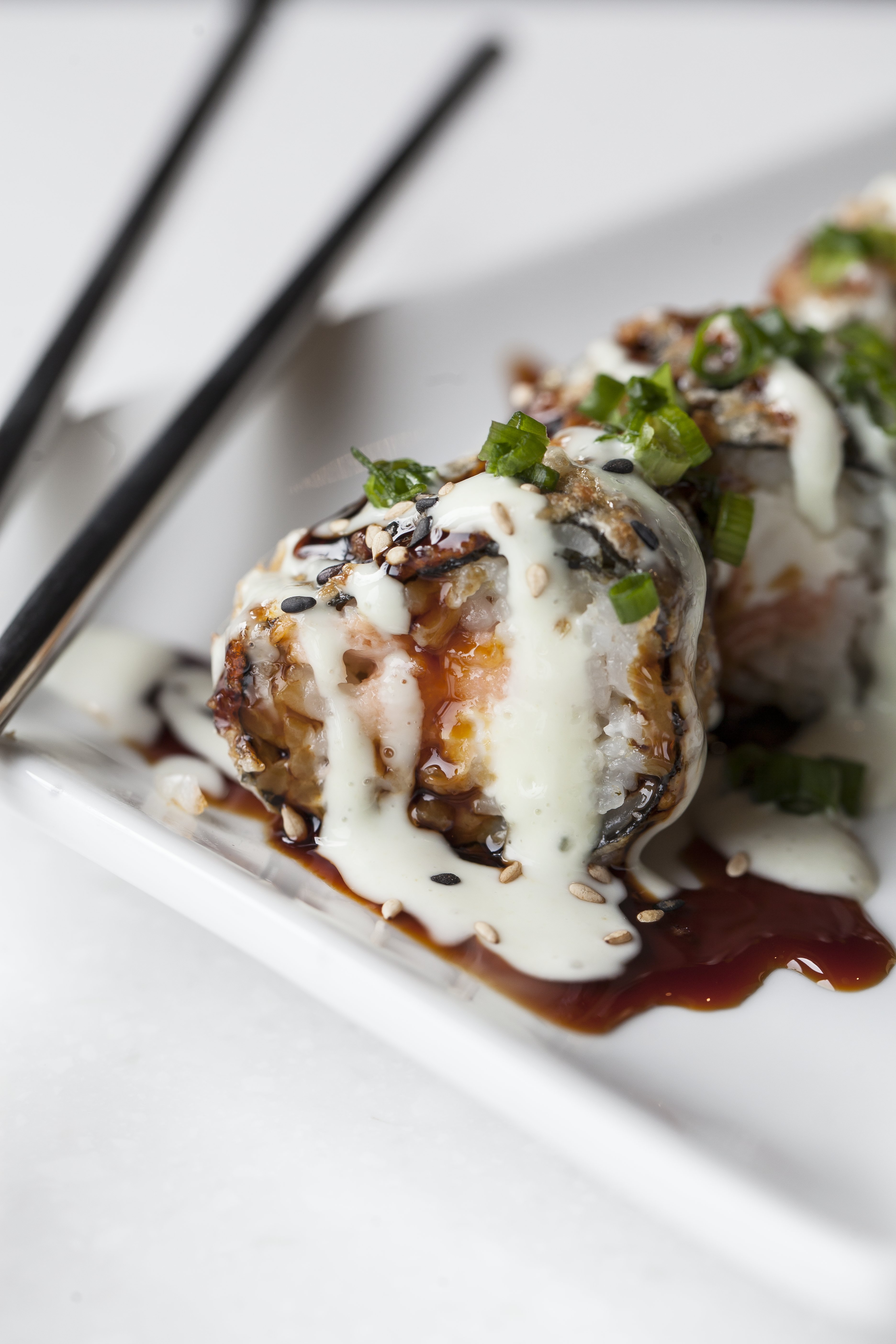 Tint has tentative plans for opening an additional restaurant, and although it won’t be another sushi joint, he’s going to stay the course with Asian fusion. He’s skeptical about Nashville’s appetite for a full-blown Burmese restaurant (“too fishy”), but he does have plans to incorporate a few more dishes from his home country at Nomzilla. As quickly as he lays out his rough sketch for this new venture, though, he’s excitedly telling me about a slew of other new pursuits: drone photography and videography, real estate flipping. He laughs at my surprise and explains, “I’m a big nerd.” Tint’s the kind of guy that has a hard time standing still for too long—he’s always looking to learn new things and put that knowledge into action.

As much as this entrepreneur loves dreaming up new future pursuits, he has plenty of things to be excited about in the present. “I just got married; we’re trying to have a family. The whole white picket fence,” he laughs.

Nomzilla is still keeping Tint busy seven days a week, but it’s a labor of love. “The best thing about having a restaurant is seeing the client enjoy and appreciate the things you put out,” he says. “You can’t please everybody. But it doesn’t really bother me anymore. That difference should be embraced.” Luckily, Nashville has been quick to embrace Tint and his singular, fresh take on sushi.