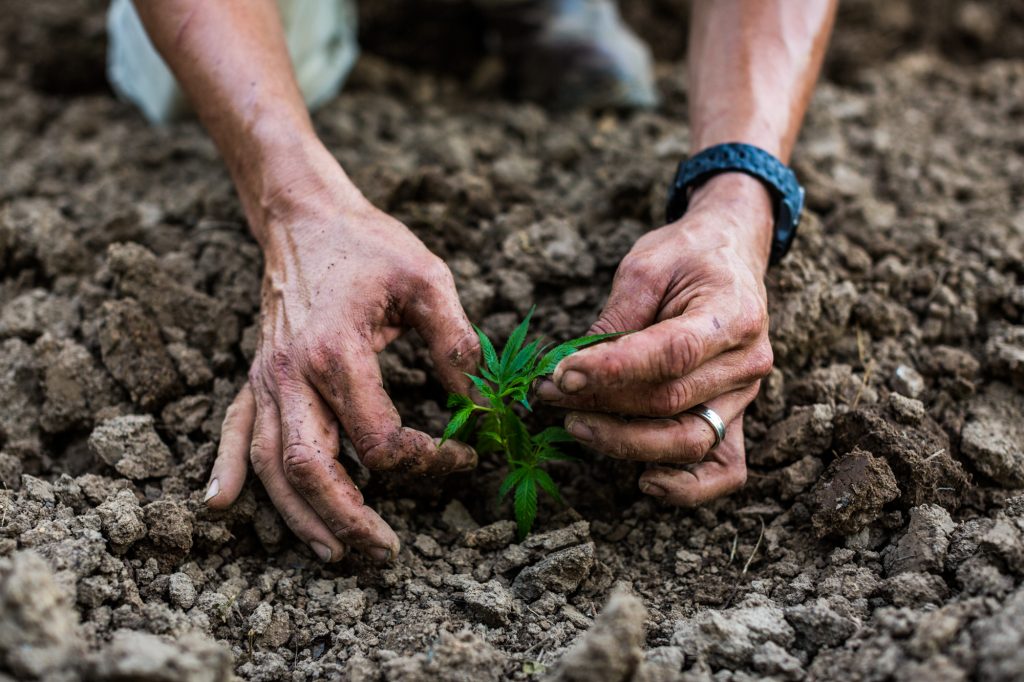 “I’m like stupid allergic to them,” Christie Tarleton says. “I shouldn’t be in farming.”

I pluck a bluish-black wasp from Christie’s hair and flick it to our left, hoping it finds something more interesting to bother. That shouldn’t be too hard. Christie and I are standing in a greenhouse in the backyard of her brick, ranch-style home in Bells Bend with four acres of farm behind us. The Tarletons’ farm, where Christie lives with her husband, Will, is home to hemp plants, vegetables, flowers, and a flock of sheep.

Christie ushers me over to a small army of potted hemp “babies.” The tiny leaves are just beginning to break through the soil. Christie pets them like you would a cat. The Tarletons grow their hemp in one of two ways: seeding—the seeds “did really freaking good this year”—or by using the “moms,” which are located in an adjacent growroom, the next stop on the tour.

Will is pacing around the backyard talking with someone on the phone. Before we enter the growroom, Christie flags him down and gets the okay to show me inside. There’s a handful of oscillating fans keeping the room cool. The “moms” shuffle in the synthetic breeze as Christie shows me the different varieties of the hemp plants, which at their current size come up to my waist. 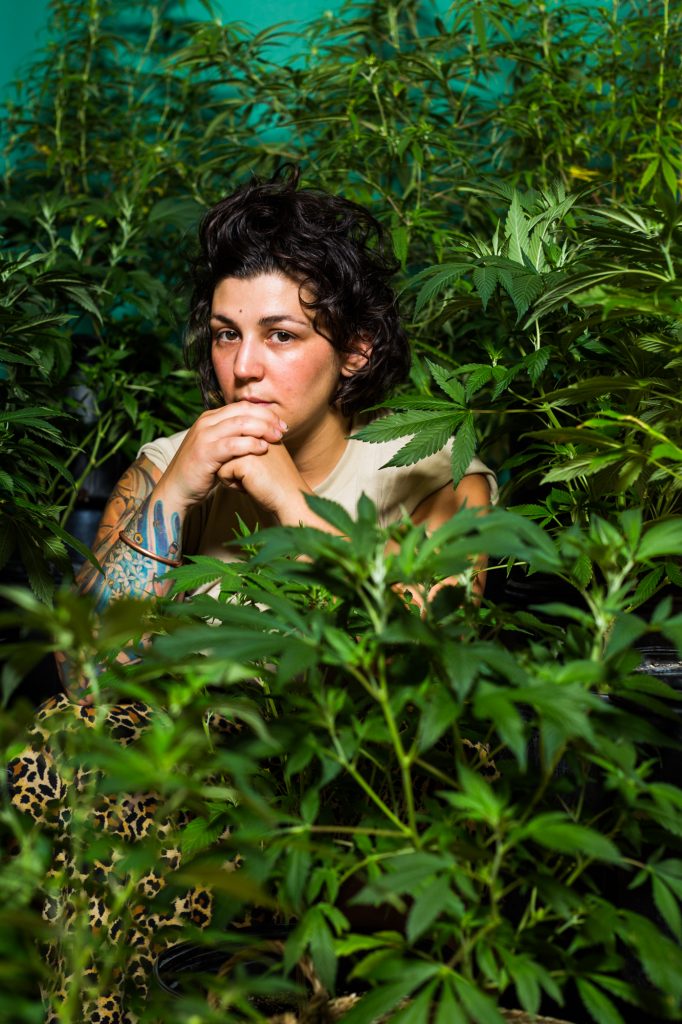 Before talking with the Tarletons, I possessed only a cursory knowledge of what hemp was and what distinguishes it from marijuana. I knew even less about the byzantine laws surrounding the plant and its cultivation. Thankfully, I’m meeting with the experts. Hemp, like marijuana, is a variety of cannabis sativa. The distinguishing factor between the two, both legally and physiologically, is the level of THC (the stuff that gets you high). Hemp has a negligible amount of THC. Marijuana, um, doesn’t.

Hemp is harvested for a variety of reasons. The plant’s fibers are often used in construction projects, packaging and stationery, and especially clothes. Christie calls using the fiber “an art form.” Where the Tarletons have profited most, however, is in the extraction of CBD—short for cannabidiol—a compound found in both hemp and marijuana that has medicinal and therapeutic effects when processed. It can’t get you high. Because the government doesn’t want people growing weed, CBD is only legal if extracted from hemp plants, although it’s impossible to detect if it came from marijuana. 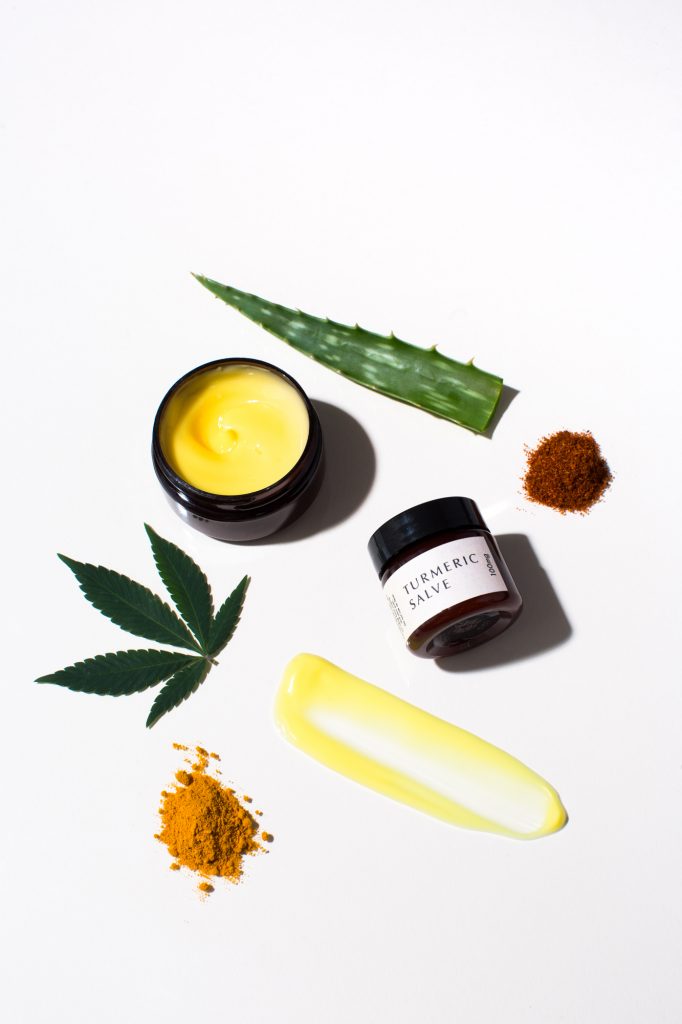 “People are just looking for natural relief,” she says. “All the basic shit we all deal with—anxiety, migraines, stress, inflammation.”

For such a politically conservative state, hemp farmers are set up pretty well in Tennessee. It’s the stigma attached to their industry, Christie says, that is a bigger roadblock. In the Tarletons’ mind, fighting hemp because of a personal qualm with marijuana is a perfect example of throwing the baby out with the bathwater. It’s this conflation of hemp and marijuana that keeps the stigma against industrial hemp farming alive.

“We grow organic vegetables because we care about the soil and the earth and how we decide to live our lives in our community,” Christie says. “It’s the same way about hemp. If CBD is a medicine that can help people and it’s financially cost effective, why wouldn’t you want to do good in your community with that?” 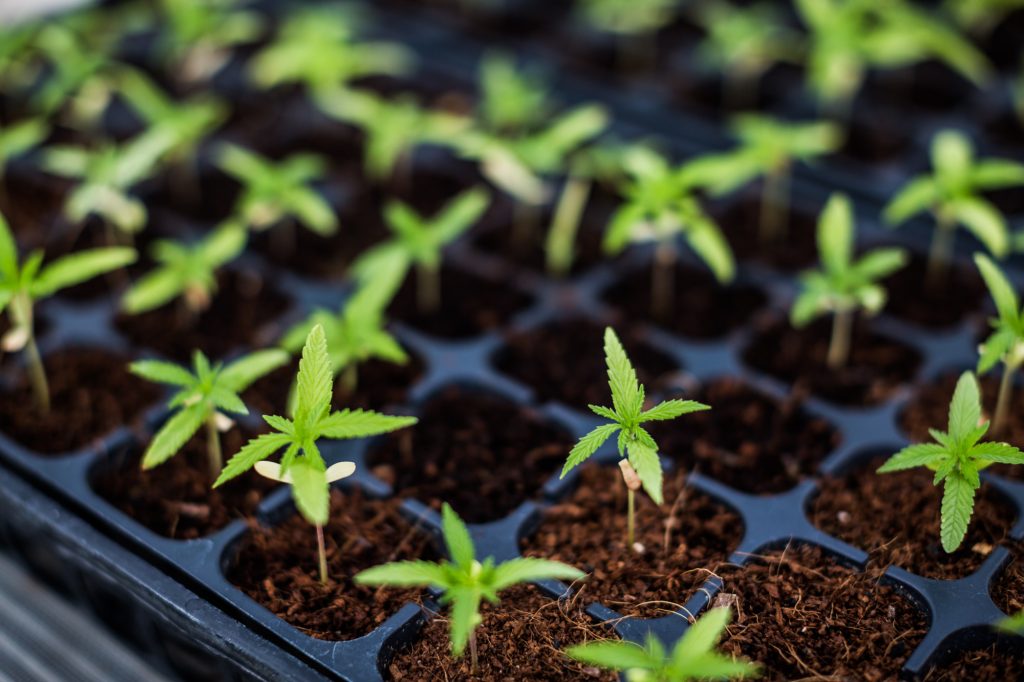 It’s a question that’s difficult for detractors to answer, which is why Will and Christie have become effective citizen lobbyists with the Tennessee Hemp Industries Association (TNHIA).

“I’m ready to change the frequency,” Christie says. “That’s another reason we were like, ‘Let’s do YUYO.’ Because we have the ability to actually educate people about it and just be cool. If people want to come out to the farm and see plants grow, they can see plants grow—normalize it, have a conversation about it.”

The couple started growing hemp in Tennessee when it first became legal four years ago. Before that, Christie was traveling all over the country—she initially moved to Nashville to pursue music.

“I dated a cook for a long time, so I was pretty deep into the food world, but I just loved working with my hands and working outside,” Christie says. “That was one thing I really wanted to do.”

Her penchant for hands-on labor landed her a job at Bear Creek Farm in Franklin. “That segued into me getting an apprenticeship back in New York at a place called Stone Barns, which cultivated young farmers to kind of figure out alternative, interesting ways to become sustaining small farmers. My focus there was in livestock, which is why we have a flock of sheep. I’ve always liked farming, but I only knew about raising animals.”

Now she does a little bit of everything. In addition to the hemp farming with Will and YUYO Botanics, Christie is perhaps best known around Nashville—and to her thousands of Instagram followers—as The Farmer’s Florist. She creates perennially Instagrammable bouquets and arrangements for weddings, photoshoots, and other special occasions. She had a booth at Bonnaroo this year.

On a certain disreputable “holiday” in late April, Christie posted a picture of one of their hemp plants on the Farmer’s Florist Instagram feed, something she had never done before and was a little apprehensive about. She didn’t want too many people to clutch their pearls. With more than one thousand likes, it is her top performing post to date. Still, she likes the idea of keeping a low profile with their CBD product. 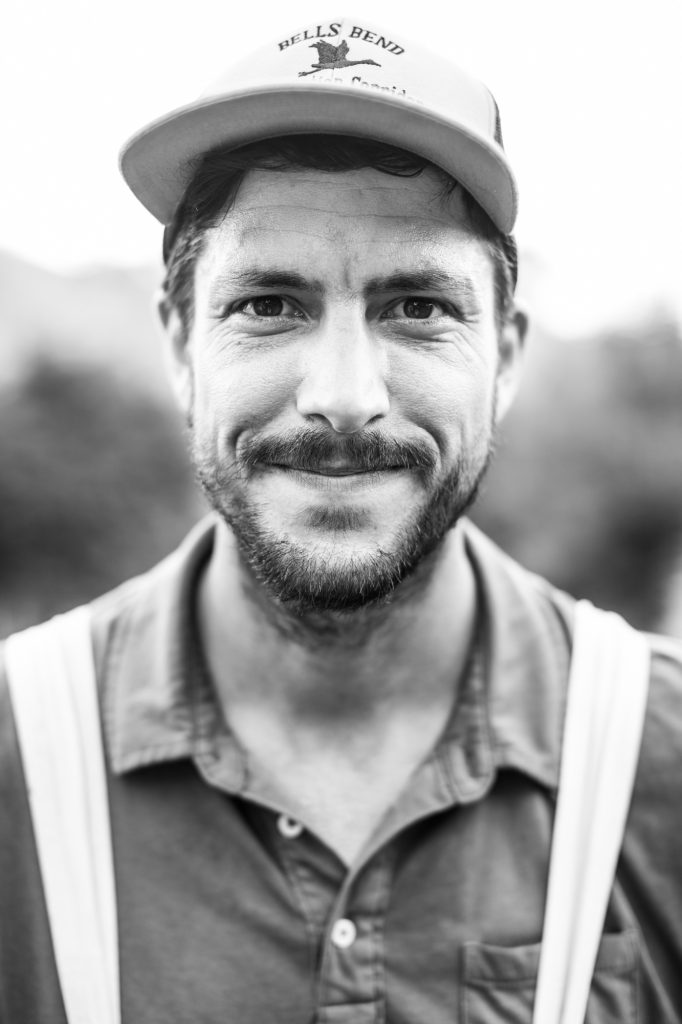 But that’s, like, drug-dealer-sounding, right? Local government seemed to think so. In early February, multiple state and local law enforcement agencies shut down twenty-three different stores in Rutherford County (YUYO, in Davidson County, was spared) in a sting operation dubbed “Operation Candy Crush.” The reasoning was that the stores were selling CBD products, like gummies, that were derived from marijuana. The shops lost out on thousands of dollars in revenue and legal fees for the five days their doors were padlocked, and the whole operation eventually turned into a blame game between the TBI, the district attorney’s office, and other law enforcement agencies.

In the end, nobody could tell if the CBD in the products was derived from marijuana or industrial hemp. A spokesperson for the TBI told local media that “such a determination is beyond the capability of contemporary drug identification,” something any one of the shop owners knew from the beginning. A circuit court judge ruled that the shops’ keys and cash registers be returned to the owners.

“After that,” Christie says, “politicians basically said, ‘It’s been decided. [Hemp] is a legal crop. We’re not concerned about it.’” 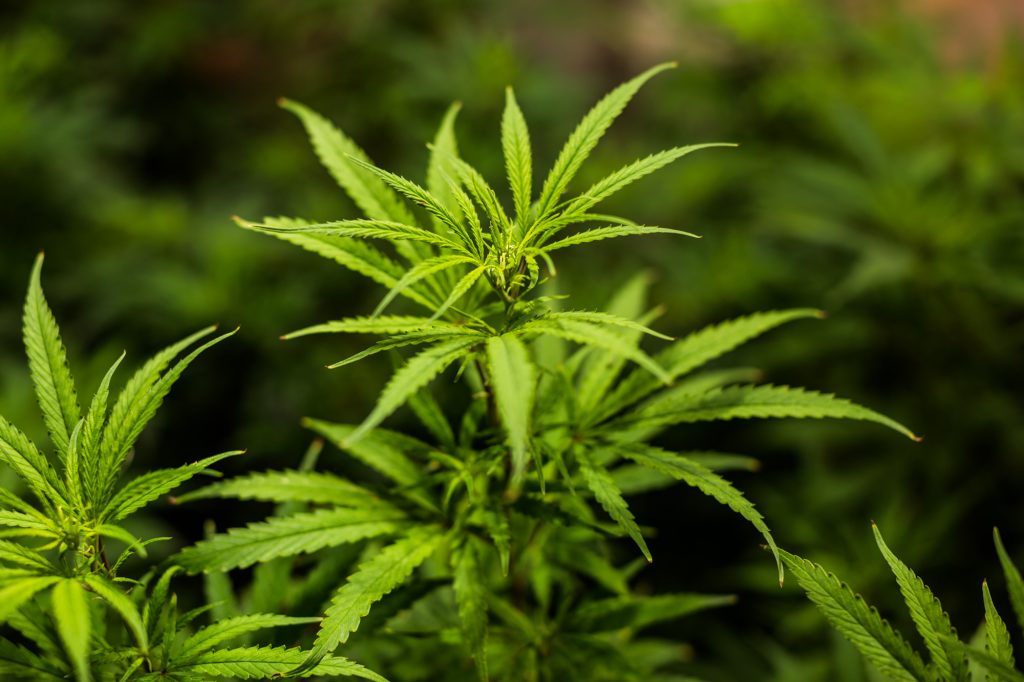 As the attitude toward their crop has swung to the positive side, it’s not difficult for the Tarletons to envisage a prosperous future in the hemp industry. But they know they’re not completely out of the woods. Now they’re soldiers in a battle between the little guys and the draconian pharma companies, specifically the British-owned company GW Pharmaceuticals.

“They’ve patented a bunch of processing techniques—basically all of them,” Will says. “And they don’t even use them. Once they get these patents through, they can start sending all the processors cease and desist orders. So they’ve gone into other states that don’t have a strong hemp lobby and pushed these bills through that basically say CBD needs to be prescribed.”

Will tells me that GW Pharmaceuticals’ CBD isolate is $2,500 a month for one thousand milligrams. Nine hundred milligrams of YUYO costs just $110. This is why, for the Tarletons and the growing number of hemp farmers in Tennessee, their lobbying efforts with TNHIA are so important. 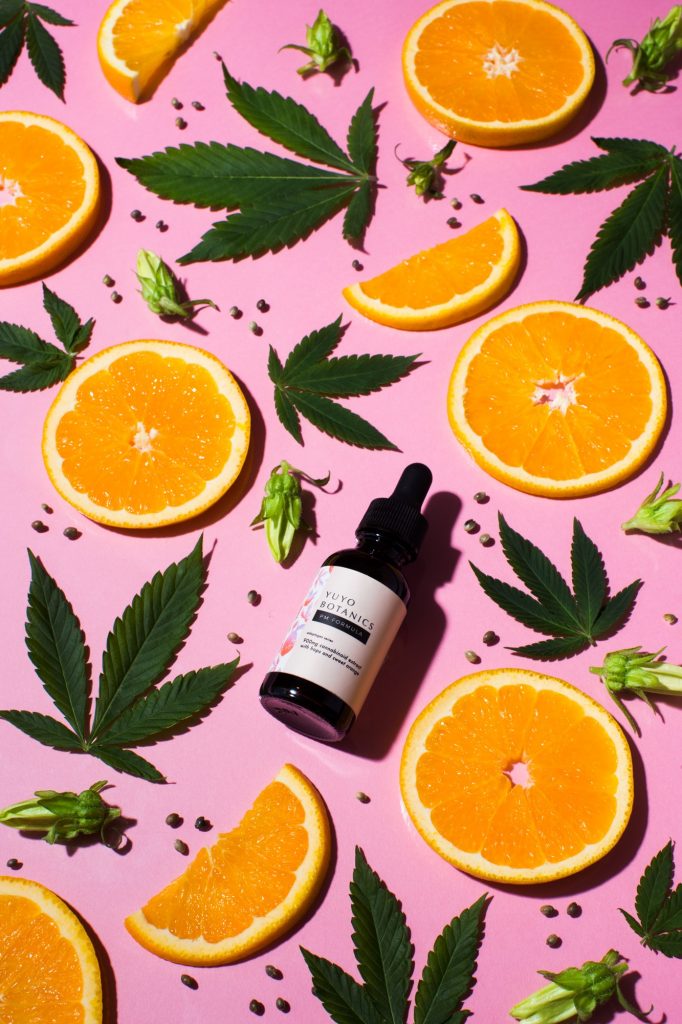 “There’s young people out there that want to create small farms and create sustainable agriculture,” Christie explains. “Why wouldn’t you actually put money into those who want to responsibly take care of the earth and their community instead of making a bunch of fucking money for people already sitting pretty in the pharmaceutical world? It’s crazy to me.”

Christie doesn’t stay frustrated for long. She’s much too sunny a person to let the potentially Sisyphean war against big pharma keep her down, and she takes solace in the fact that this community of fellow farmers, followers, growers, and artists will continue to simply back the best crop.

“There will always be the consumer, regardless if there is a GW Pharmaceutical product,” Tarleton says. “Somebody will alternatively want to go to the Whole Foods and pick up something that’s small-farm based. Like, you’ll always want to buy from a CSA instead of going to Kroger. There’s always going to be that consumer, so I’m hoping that’s going to continue to prevail in this world.”