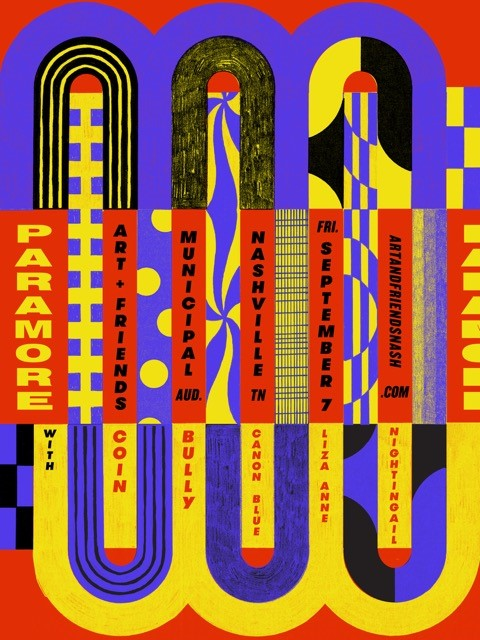 A little good news for a time when there isn’t enough good news: Paramore is bringing a one-night-only extravaganza to Municipal Auditorium on Friday, September 7. The event, titled Paramore Arts + Friends, aims to celebrate Nashville’s vibrant arts community and will feature performances by locals like COIN, Liza Anne, Bully, Canon Blue, Nightingail, and of course, Paramore. You can also expect art from Nashville mainstays like Alex Lockwood and Elephant Gallery, frequent Paramore collaborator Mike Kluge, New Hat (that’s who did that awesome show poster above), and more TBA artists.

We hopped on the phone with Hayley Williams, who was gearing up to play headline Brooklyn’s Barclays center on June 26, to talk about the event, Paramore’s reconnection with their hometown, and the prospect of a new album.

Read the interview below, where you can also watch Paramore’s new video for After Laughter’s “Caught in the Middle.”

How did the idea for Paramore Art + Friends come about, and why’d you want to do this instead of another hometown date?

The last two to three years—since we came home after the self-titled album—I feel like we’ve gotten more time in our hometown than since we were kids. Especially during the After Laughter album cycle, it’s just been so cool to feel more a part of the Nashville community than we ever felt before.

I don’t think people associated us with Nashville very much growing up. We were so young when we started, and we didn’t play a lot of local shows. We just started touring and that was it. We really feel more connected than ever to our town and the arts community here and some of our friends’ bands that are in town, and we kind of just want to celebrate it, man . . . And we felt like the right way to celebrate was by throwing a big party where it’s not really just about Paramore, but about all of our friends making art together and using our respective skill sets. It just sounds more fun to make it more than about just us.

Tell me about the visual artists that are going to be there—who should we expect?

We’re actually still sort of recruiting friends to come and be part of it, but so far people that are definitely contributing and going to be part of the event are Elephant Gallery—obviously Alex Lockwood and lot of the other Elephant Gallery artists had setups at Bonnaroo and all around town, so I feel like a lot of people who are already familiar with the Nashville arts community will recognize their work. Also, Mike Kluge, who has been doing all of the visuals for our shows and all our [live] content for the past year, he’s going to have a setup there that’s very interactive. We also got our friends in the New Hat project involved. They’re doing the show poster, which will be sort of a commemorative thing that people can purchase, as well some sort of setup where people can come and be a part of their art as well. [We’re] making it a point to feature all of these people so that when people come to the show, they can get know these artists, they can see it, they can live in it in the moment.

[It’s] just good way to gather all of our friends together and show off this incredible part of our town that’s sort of blossoming right now, and have people from all over the country—and maybe even all over the world—fly in. We’ve had people do that for Paramore shows alone, but I think if, again, it’s a bigger night that just Paramore, who knows what it could turn into. We’re really kind of pumped to see.

Would you say you’re taking that attitude—that spirit of community that’s here right now—and you’re kind of paying it forward considering you have a bigger platform than a lot of these local artists you know?

I hope so! Honestly, if you have things and don’t share them, it just kind of feels like you’re in a big room by yourself . . . I think that our band has already—in the fifteen years that we’ve been a band—seen our own ups and downs, whether personally or even career-wise. I feel like no matter what, we try and hold on to our own identity, even when it’s evolving. It kind of helps us to stay connected to other people too, and there’s a really great sense of—it’s not necessarily accountability, but it’s a sense of grounding when you find yourself part of a community that isn’t all about the ladder. It’s not a social ladder, it’s not a career ladder, it’s just about being excited for each other. To me, no matter the size of the bands that we hang out with, or the size of our band, we’re going to share it. Because it’s more fun that way.

I have to ask: Have you all been working on any new material while touring?

We really haven’t! But it’s not been purposeful either way. If ideas come up, we might mess around with them, but we’re not putting any pressure on ourselves. To be quite honest, we’re still enjoying the songs that we wrote for After Laughter, and these shows are so much fun. I can’t even really describe the feeling out here right now because it’s still positive . . . Coming out of sort of the other side of whatever we went through to make that After Laughter , it’s been an incredible summer already. Doing these songs in a new setting and from a new perspective and watching people connect and the diversity of the crowds—all of it’s been so exciting. Even though it’s cooling down and we’re not worried about putting any pressure on this album anymore, we really just want to enjoy these shows and enjoy the music. And when a new song comes along, it’ll come along, and it’ll be great.