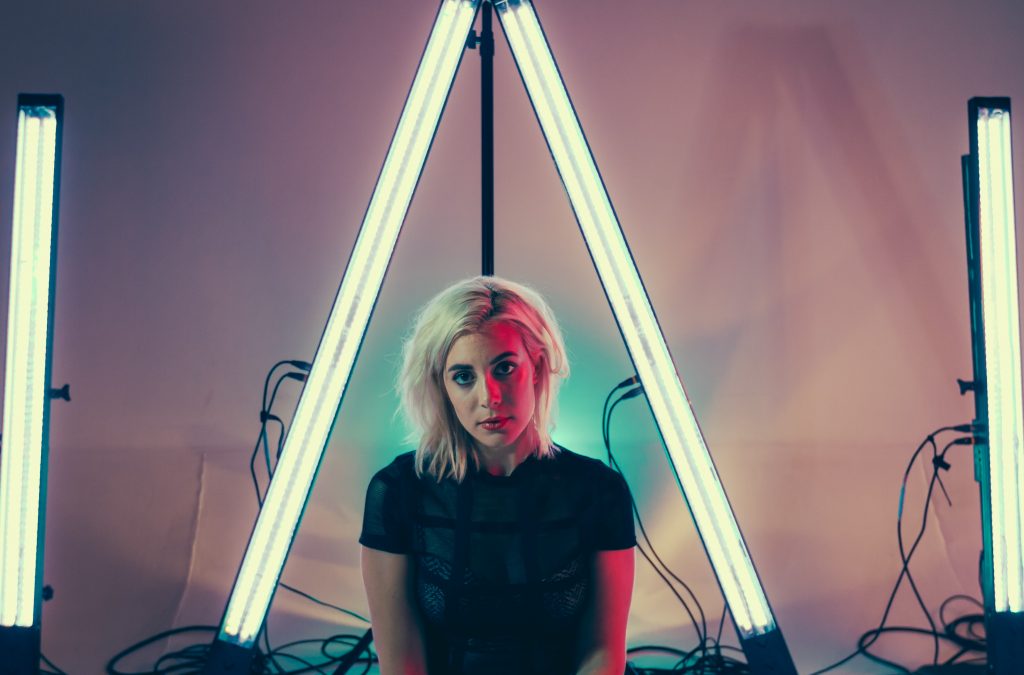 Not too long ago, the terms “Nashville pop music”    and “local singer-songwriter” strictly conjured up images of the polished Music Row machine and acoustic open-mic nights. And while those terms definitely still carry those connotations, these days they’re also starting to bring to mind new images. Instead of shiny, commercial studios on Music Row, think grungy bedroom studios in East Nashville. And instead of acoustic open-mic nights, think synth pop shows and DJ parties.

One of the names at the forefront of this new breed of local singer-songwriters is Carla Cappa, a.k.a. CAPPA. Over the last couple of years, the platinum blonde twenty-four-year-old has become a key figure in Nashville’s evolving indie landscape, and her infectious brand of synth pop is also turning heads outside the city. Though it may all seem fairly overnight, the budding pop diva’s journey from Cappa to CAPPA is actually a story many years in the making.

CAPPA was born and raised in the suburbs of Philadelphia, where music played a key role in her childhood. Her mother was a singer-songwriter. “She gave me a guitar when I was five, and I started playing from there,” CAPPA tells me over coffee. While still in high school, she recorded her first album by using an assigned school presentation to snag two weeks in a recording studio, enough time to create a ten-song project. I solicit a few laughs when I ask her what kind of album it was. “Pop rock. Lots of guitars. Very different from what I do now,” she chuckles. “But it’s basically when I realized I absolutely wanted to do this for the rest of my life.” 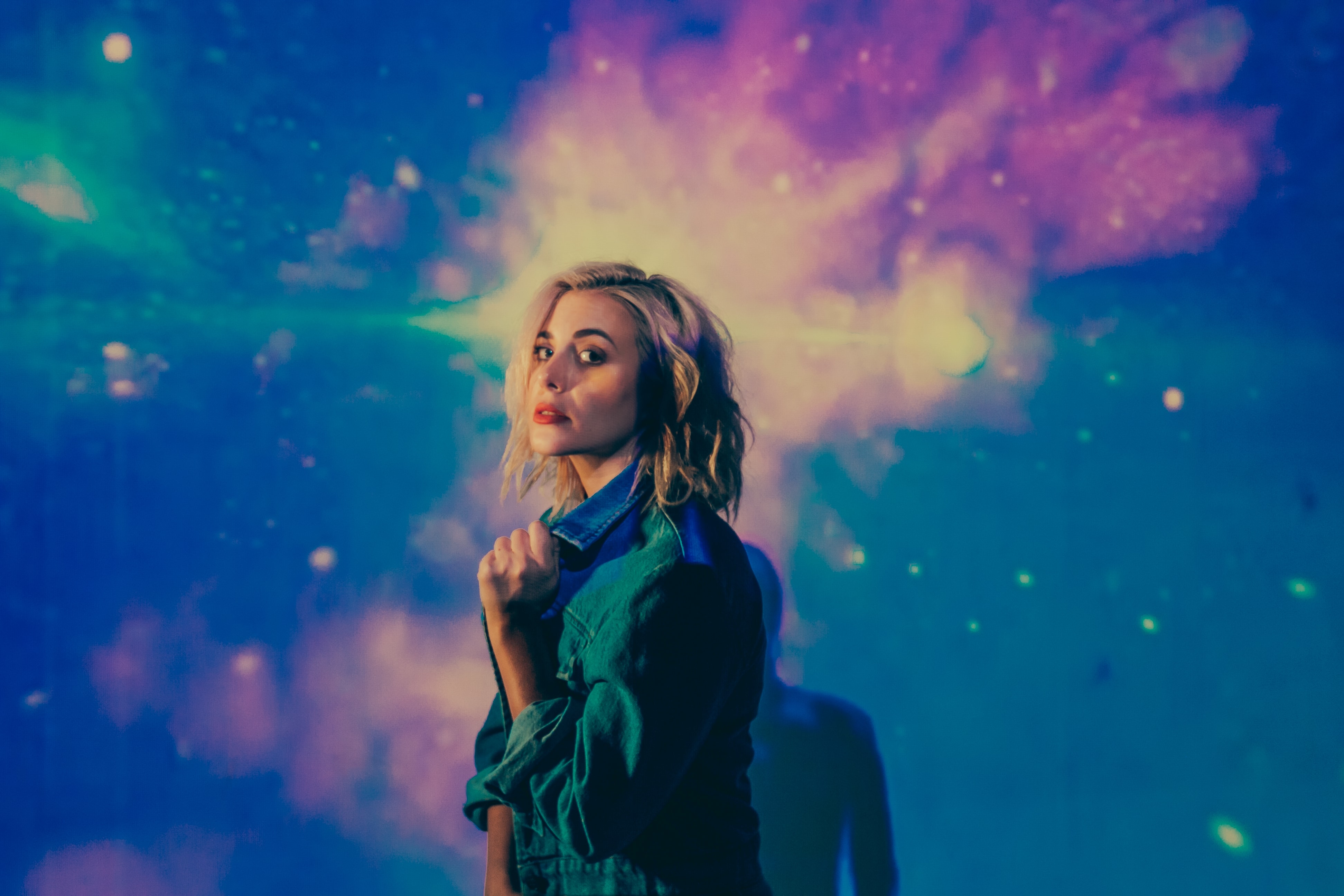 Her first efforts may have been raw and unpolished, but even back then, her natural affinity for songwriting didn’t go unnoticed. One of the songs on her first project won the USA Songwriting Competition when she was only seventeen. Along with this honor came a trip to Nashville for a showcase at the venerable Bluebird Cafe. It was CAPPA’s first trip to town.

She was taken by Music City, enough to return for college at Belmont University upon graduating high school. Things didn’t go exactly as planned, however. “I went to Belmont for a year . . . and then I left. I just decided I wanted to be involved in the music scene and songwriting more than I wanted to be at school for it,” she explains. Still, she had second thoughts. “I moved home for six months because I wasn’t so sure anymore. And I took an ‘adult job’ working for Samsung. But then I was like, What am I doing? And so then I moved back.”

CAPPA got a couple of internships around town, where she was able to meet new people as well as sit in on cowriting sessions. She eventually clicked with a few folks, and soon she was having her own sessions.

“I think a big part of creating the music you want is having producers that understand you and what you’re going for, what you want to portray. I have recorded in New York, Philly, L.A., and Nashville, and truthfully, the producers I’ve worked with here have been my favorite thus far. Before I moved here, I had heard so often about it being only country music, but that’s really never felt like the case. I had thought about moving to New York or L.A. in the past, but Nashville seemed to have a lot of the good and none of the downsides of those other cities.” 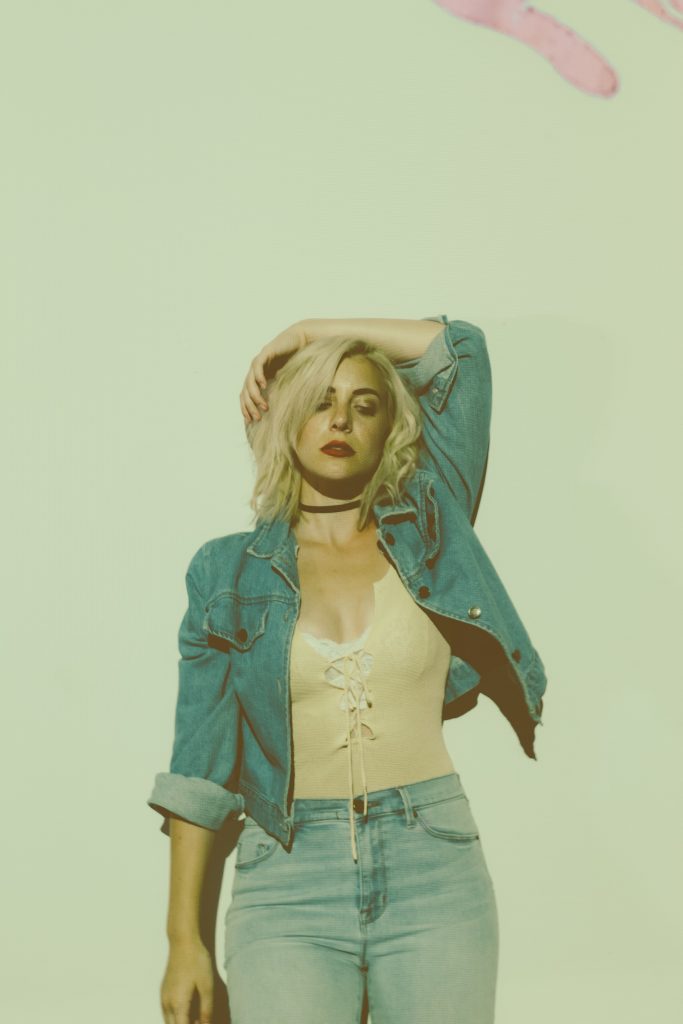 She mentions names like Jon Santana and Kenny Fleetwood, both producers she’s worked with consistently since moving to Nashville. It was with Jon Santana that she made her first EP as CAPPA, a five-song, self-titled effort that came out in April 2015, the result of an organic process she describes as “a bit accidental.”

While working with Santana, the pair realized they had enough quality material for a project. They drew from an array of CAPPA’s half-finished songs and lyrics and put together an EP in just a couple of months. With its sleek, catchy production and clever, empowering lyrics about relationships and love, the debut resonated well with listeners. “I have been doing music for so long, and I think this was the first thing I put out that really seemed to click with people. I think once you are doing the type of music that represents you best, people seem to relate to it more easily.”

CAPPA reflects on the years of trial and error it took to evolve into her current artistic self, back when she still released music under her given name, Carla Cappa. “I grew up on a lot of rock and pop rock music, so I had [previously] worked on some projects in that genre. I had also put out some music more in the EDM pop world. But I don’t regret any of the styles of music I have worked on. I think it’s made it feel extra special working on the music I am now.”

Since her debut EP, CAPPA has dropped a handful of new singles and a pair of memorable covers, all of which have garnered the blossoming pop darling considerable media attention and an increasingly devout following. Her two covers, personalized renditions of TLC’s “No Scrubs” and Spice Girls’ “Wannabe”—which she dropped earlier this summer on the song’s twentieth anniversary—celebrate her roots as a ’90s baby and pay homage to important pop classics. But while nostalgic nods never hurt any artist’s appeal, it’s CAPPA’s new and original tunes that are making the biggest impression. 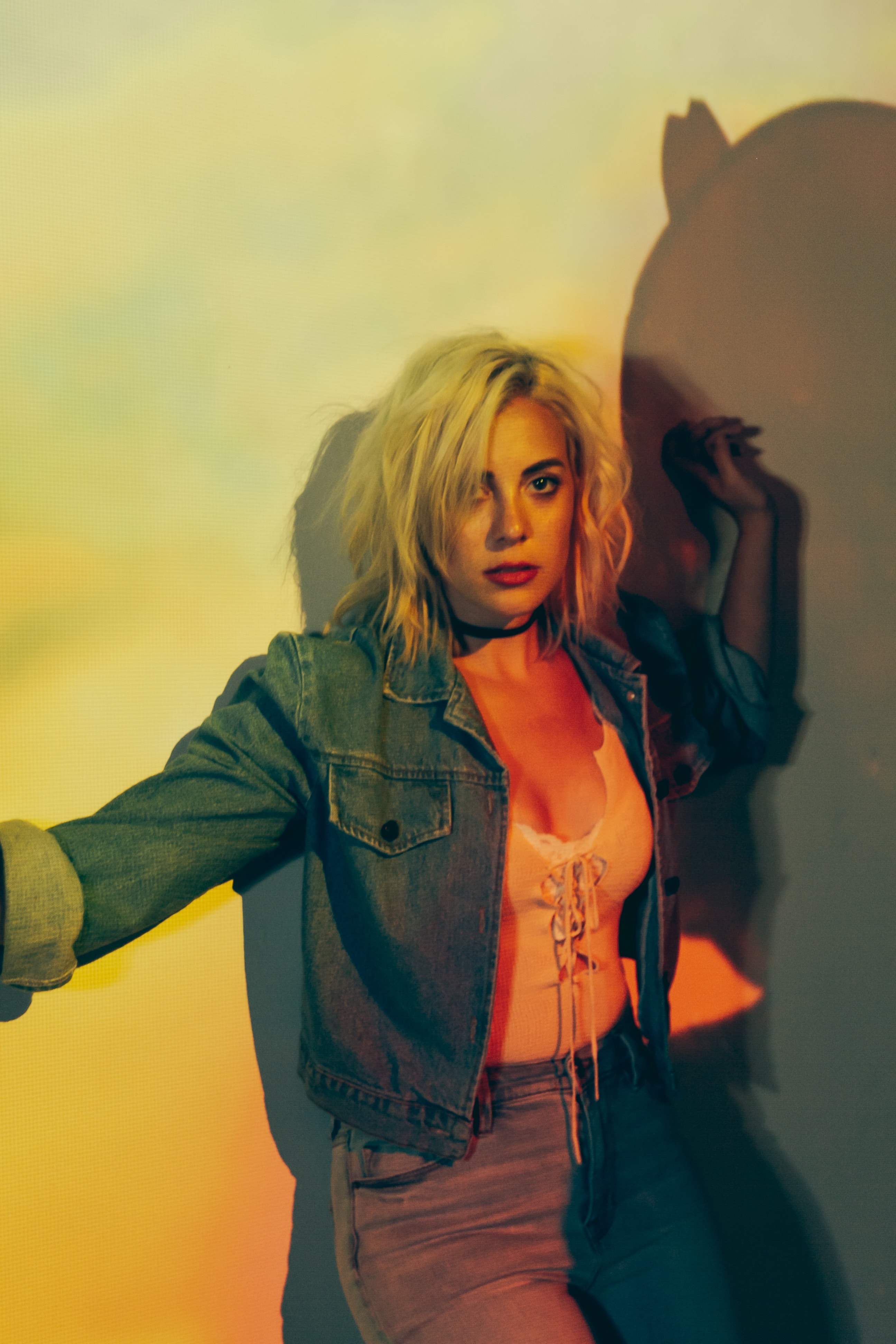 “I’m Good,” a single she released in May, is one of the highlights on her brand-new Queen of Hearts EP, which drops September 16. “‘I’m Good’ is basically a self-proclamation,” CAPPA explains. “It’s the idea that just because you aren’t in a relationship doesn’t mean you need—or want—someone on your arm to know your worth.” On the song’s catchy chorus, she sings with gusto, “I don’t wanna dance with you / I don’t wanna kiss goodnight / Don’t care about your money / And I don’t want a drink tonight / You gotta run before you drive / You’ re just lookin’ to . . . Not the type / If you get someone else to go, you should, ‘cause I’m good.”

The music video for “I’m Good,” which premiered in June on Billboard.com, found CAPPA working with local musician and friend Chancellor Warhol on what was incidentally Warhol’s
directorial debut. The video is a vibrant and nostalgic ode to summer nights, full of bowling, arcade games, and lots of cruising around town (top down, of course). Though it was their first time working together, CAPPA and Warhol share obvious chemistry. Perhaps we’ll see more collaborations from the pair in the future.

For now, CAPPA is focused on Queen of Hearts, a six-song offering that was approached with more deliberation than her self-titled debut. Queen of Hearts took eight months to put together, compared to the two months it took her to create her prior release. For this record, she teamed up again with Jon Santana, whom she calls her “main guy. He’s my favorite.”

On top of “I’m Good,” Queen of Hearts contains other singles released over the past year, including “Other Girls” and “Mad About U,” a hypnotic, genre-bending banger with charged bass lines and emphatic drum claps. Of course, there’s also yet-unreleased material on the EP. CAPPA and Santana build from where they left off the first time around—that means a whole new batch of dreamy, intoxicating pop songs, complete with improved, more robust production and tighter, more refined songwriting. 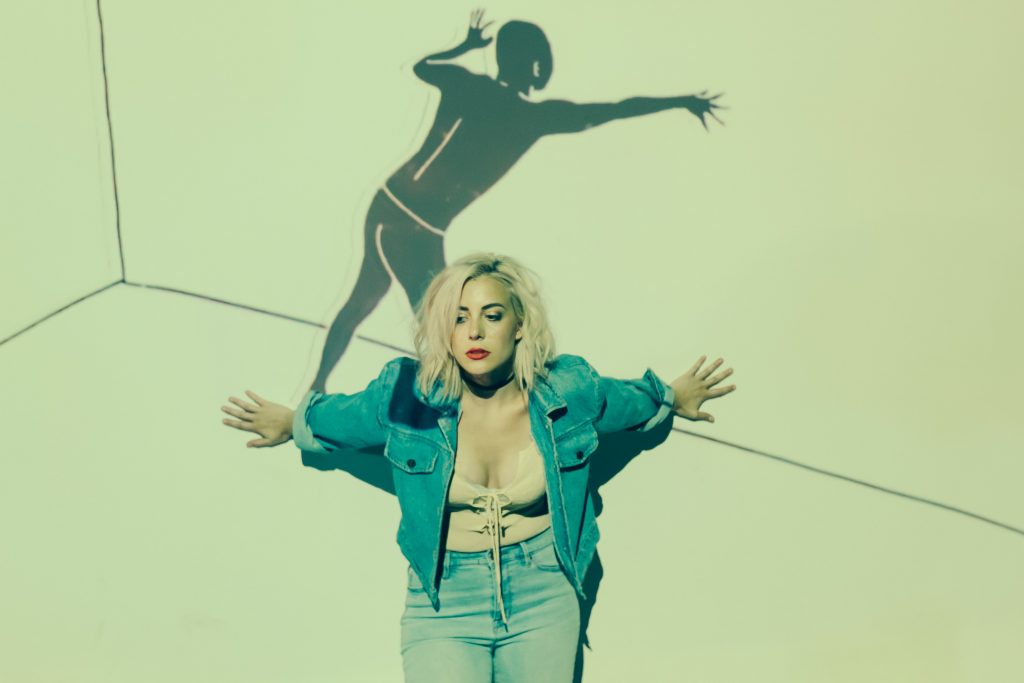 The rising star also has plans to tour nationally this fall. Starting this month, she’ll be hitting the road, opening for fellow Nashville singer-songwriter Matt Wertz. It’ll be her first national tour, and it’s a big step and an impressive accomplishment for an independent artist with no record label or booking agent. Her bedroom-produced songs will soon be heard by audiences all over the country, and the timing couldn’t be better.

CAPPA understands how special of a moment this is, both in her personal career and for Nashville as a whole. “There’s been a lot of people working on stuff in their bedrooms, and there’s been awesome music. I started hearing it like two years ago when I started releasing stuff. But now I think it’s getting a lot of notoriety, and people are starting to come together and realize how good everybody else is.

“[Nashville pop music] is just as good as the things that are coming out of Los Angeles. Or the things coming out of Portland or New York. So I think there’s a big turn happening. People have started moving to Nashville to develop their pop music careers. I’d say in the next four years, people are going to come to Nashville explicitly to work on pop music.”

Who knows? Maybe in four years, the newest wave of singer-songwriters arriving in Music City will be peppered with fledgling musicians all vying to be the next CAPPA.