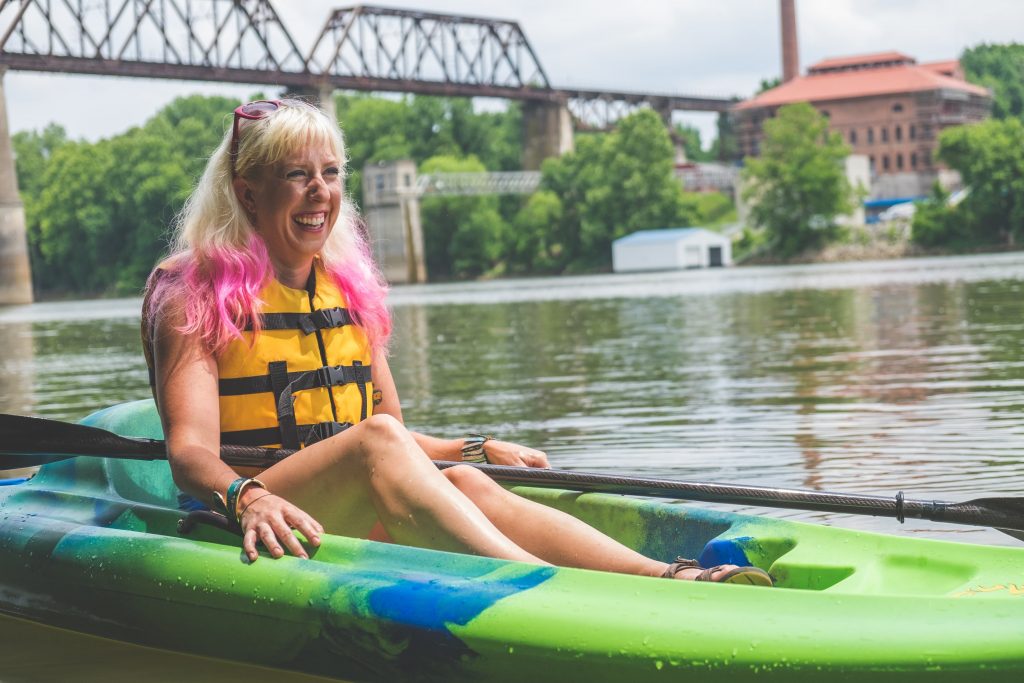 THE NEXT TIME YOU’RE STUCK WRITING TPS REPORTS AT WORK, take a quick minute and let your mind wander to a faraway Shangri-la. You might imagine floating down a lazy river. On one bank, a pair of horses lifts their heads from the rejuvenating waters and greets you with a whinny. Above, you’re greeted by another group of your animal friends— a flock of gangly yet strangely majestic birds squawks a fond adieu from the treetops as you amble carelessly down river, deeper into your dreams.

This fantasy may not have been too farfetched for Annie Klaver a couple years ago at her corporate job. Annie has been a lover of the outdoors all her life, but after nearly fifteen years of being boxed up inside, she realized that something was missing. “There was a part of me that was dormant,” she recognizes. “I forgot to heed this part of me for a long time.” That’s when she took a leap of faith headlong into the mighty Cumberland and opened River Queen Voyages, Nashville’s first kayak outfitter.

Annie’s childhood was different from the childhood of many kids she sees today. “I was not raised by helicopter parents,” she recalls, noting how she would often be gone until dinner. “We experienced nature in an uninhibited way—playing with sticks, falling out of trees.” It was these early experiences romping about in the woods of Michigan and Wisconsin that eventually inspired her to open River Queen.

In college, Annie set herself up for a career abroad, majoring in French and international relations with a minor in Western European studies. She taught English in France for a stint but eventually landed her first corporate job doing international logistics at Meguiar’s, a car care product company headquartered in Rotterdam, Holland. She became homesick after a few years abroad and made her debut in Nashville in 2005, when she transferred to the company’s offices outside of the city. Shortly afterward, she moved on to a few other positions in video production. Annie admits that the jobs were not soul sucking—one even provided an unsolicited kegerator to her department—but she never lost her intrinsic desire to be outdoors. While she was still working her various corporate jobs, Annie and her friends formed a group they called the rivergang. They paddled, hiked, and camped all over Middle Tennessee whenever they could get away. Around that same time, Annie bought a house on the Cumberland River in Madison. The move afforded her the opportunity to reconnect with nature, but not in the half-day or full-day commitments you’re stuck with when you go to one of the canoe and kayak outfitters outside of town or when you go camping. With a house on the banks of the Cumberland, Annie could easily put her kayak in the river in the morning and decompress for a while before going to work.

Every day she became increasingly aware of the recreational resource Nashville had in the Cumberland River, and increasingly aware that she was one of the few people taking advantage of it. More and more she thought back to her childhood. “There was no agenda. You were just kinda out there and in touch with nature,” Annie reminisces. “I didn’t know I was missing that for a long time because I was a successful business lady, but all of the sudden I realized: this sucks.” Before long, she had quit her job to remedy the problem and become a successful business lady of another sort.

In early 2015, River Queen Voyages opened its doors after Annie bought a kayak trailer and a fleet of kayaks off Craigslist, ran a successful $15,000 Indiegogo campaign for a 15-passenger van, and acquired all the necessary permits for the business from Metro Parks. “I was super lucky. I got a lot of free press from The Tennessean, The East Nashvillian, Canoe & Kayak magazine,” Annie recounts of her first year in business, and it all culminated in River Queen Voyages winning “Best View of the City” in Nashville Scene’s Best of Nashville 2015 contest. 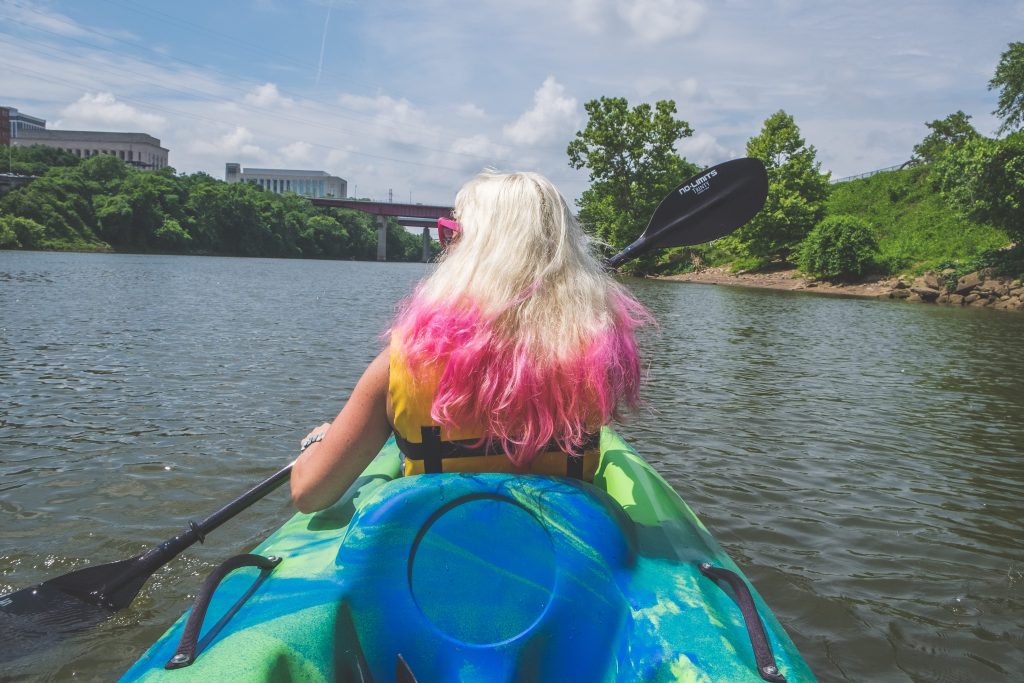 Though still new, River Queen’s success has allowed Annie to focus on other issues close to her heart. While the South may be lagging in general conservation efforts, Nashville is increasingly embracing the value of its water resources. As one of the few outfitters with a permit to access the Cumberland from the East Bank Greenway downtown, Annie sees River Queen Voyages as a player in the sustainable use of the Cumberland River. At the very least, she hopes to play a role in raising awareness. “Awareness is a seed for sustainability,” Annie explains. “[River Queen Voyages] brings attention to the river.” Annie regularly hears comments from people remembering the Cumberland as grossly polluted, but she hopes that they will see River Queen kayakers in action and take a second look at the river.

It’s true that the Cumberland used to be in bad shape, but that has changed. Annie gives much of the credit to the Cumberland River Compact, a local water quality conservation nonprofit that she says “has made enormous strides in the last ten years and has been a caretaker and watchful eye.” They have turned out to be a valuable partner to River Queen Voyages, and Annie tries to support them as much as possible, like she did during Leinenkugel’s nationwide “Canoe for a Cause” benefit event last year. In addition to that event, she has partnered up with Lightning 100’s Team Green, a group that provides outdoor adventures and promotes community service and environmental awareness, for multiple river cleanups.

Annie has also recently stepped up her involvement in the Tennessee Scenic Rivers Association (TSRA), another nonprofit whose mission is to protect the health of Tennessee rivers. They have a strong paddling contingent that shares her philosophy that more awareness will lead to a greater appreciation, and, in turn, a heightened sense of stewardship. As such, many of their programs involve getting people out on the river. One way they do this is by establishing more accesses on rivers and lakes through the work of their access committee. The committee is led by a TSRA board member, Patty Shultz, whom Annie describes as the “Leslie Knope of Nashville,” and it includes representatives from several nonprofits, state and local agencies, and businesses. Annie has increased her role in the committee by helping to revive a dormant state program known as Park and Float, which would establish access points wherever the state repairs or builds a bridge over a river. 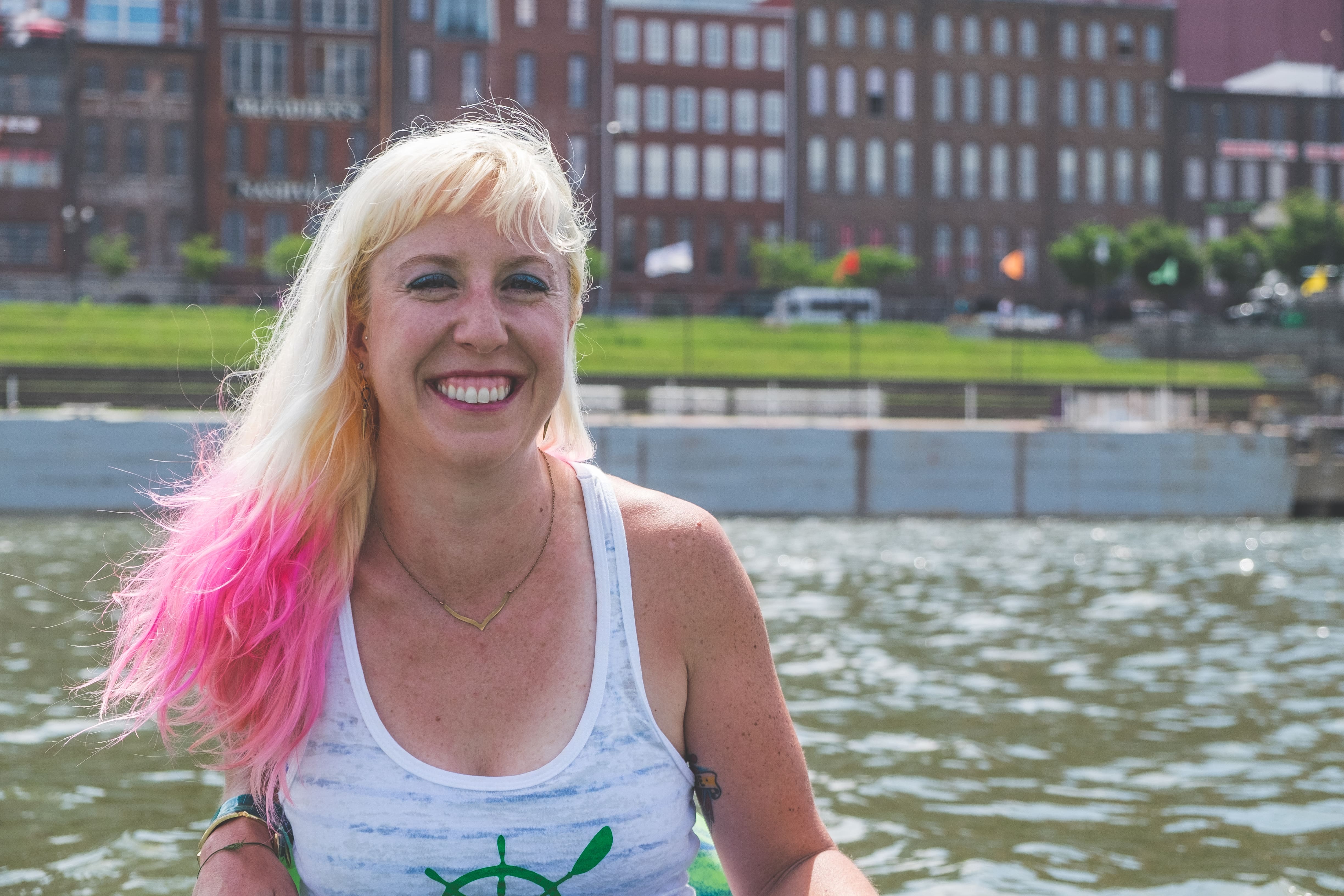 In addition to her involvement in local conservation efforts, Annie tries to work little things into her business model to “encourage people to be conscious of what they’re putting into the world. There’s a culture of consumption, and we try to tie into the business a culture of preservation.” Though these actions may be small things—like encouraging people to bring their own reusable bottles as opposed to disposable water bottles, or offering rewards for picking up trash during their trip—these can add up over time and eventually, Annie hopes, inspire a change in people’s behavior.

Currently, River Queen Voyages offers two routes, each with its own charm. Annie describes the shorter three-mile route from Shelby Park to the riverfront as the industrial route, but it culminates in the award-winning view of the Nashville skyline from an entirely unique perspective. She describes the longer fivemile route from Opryland to Shelby Park as the more pastoral, natural route. Annie’s favorite spot is on this stretch and is the stuff dreams are made of: a great blue heron rookery with at least fifteen large nests that you can paddle right under while horses drink from the water on the opposite bank. On either route, customers will have the opportunity to encounter all sorts of wildlife, from herons to beavers. They’ll see barges and the General Jackson, as well as some unique highlights such as the Demonbreun Cave, where Nashville’s first citizen, Timothy Demonbreun, lived while trapping many of the animals you can still see on this urban river today.

Nashville was founded as a river town, and like Annie and her love of the outdoors, it lost those roots for a while. Now in a booming period, it’s rediscovering the Cumberland. Before Annie started River Queen Voyages, she regularly wondered why there was no urban kayaking on such a large river that runs through the heart of the city. It seemed like no one, until very recently, ever even acknowledged the Cumberland was there. Fortunately there has been an upswing in the number of paddlers on the river, and many of Annie’s customers are pleasantly surprised at how clean it is, at how many different animals they see, that they didn’t find dead bodies, etc. Annie is hopeful that Nashville’s recent growth will foster even more appreciation of the Cumberland and Nashville’s waterways, and she is proud to be playing a part in the movement.