WHEN YOU’RE SURROUNDED BY CHANGE AT EVERY TURN, you need something to hold on to—a place you can count on to always stay the same. Flanked on all sides by new construction— hotels, office buildings, and luxury condos, for the most part—the Rotier family’s restaurant on Elliston Place is one of the last holdovers from a different time.

“That used to be a Firestone,” Charlie Rotier tells me, nodding slightly toward the Rite Aid building next door. “All those grease monkeys, all those people from the funeral home across the street—back when people used to eat breakfast, it was a big party in here in the morning.” The world has turned over and back since those days, but Rotier’s hasn’t. “We’re still the same,” Charlie says in his low, gravelly voice. “Our food is like it always was. It’s better quality today, but that’s it.”

Charlie’s parents, John and Evelyn Rotier, opened the place back in 1945 as a beer joint with a gambling component. To hold everybody over, they offered a few sandwiches as well. Nothing fancy—the kind of stuff your mother might make you on a school night. One day, Evelyn got the idea to put a burger on French bread, and it was a hit. “I remember them bringing one with the French bread home to me,” Charlie says. “It tasted a bit different [back then],” he admits, but then again, everything tasted better when you were a kid. Eventually, gambling was made illegal in Tennessee and the Rotiers turned the place into a regular restaurant, putting the focus on their famed twenty-five cent cheeseburger. They’ve stuck to that formula ever since.

If not for the iconic red and green neon signs and striped canopy out front, you might never know there was anything here. From the street, the front door might just as well be an entrance to a back staircase. But the inside is hardly unassuming. The door opens right up to the bar, where Charlie’s daughter, Charley, stands smiling. The walls are filled up with pictures, postcards, and knickknacks they’ve collected over the years. There’s a Budweiser Clydesdale diorama and a plaque from the Coca Cola company honoring seventy years serving Coke. Lording over it all is a picture of Evelyn Rotier—who, despite her passing last year, is still keeping a watchful eye over the place. 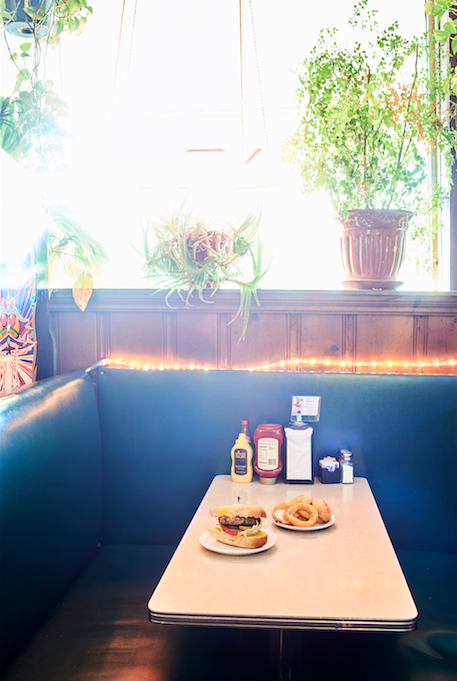 For all of the ornamentation— some might call it clutter—the place is still clean, as attested by the “100” health inspection report poking out from behind the bar. The menu features everything from chicken gizzards and fried zucchini to spaghetti with meat sauce, but Charley and I both know I’m here for a burger. I ask about the Rotier’s burger (the one on French bread), but she tells me I have to go with the grilled cheeseburger instead.

“I’m a Rotier, and I like the grilled,” she says. I can’t argue with that.

The burger comes out fast andhot, and it tastes great. It’s just ground beef, lettuce, tomato, onion, pickle, cheese, and mustard on grilled white bread. You could make it at home, but you wouldn’t. The hashbrown casserole tastes just like one you’d find at the center of a Sunday church potluck. I know I should take my time, say the burger was succulent and the casserole tantalizing, but this isn’t my first time at Rotier’s, and I don’t eat that way. The burger was good. Damn good. That’s all you need to know.

Charlie has been in the back for a while, working with the cooks to perfect the broth for tomorrow’s soup. Every so often he’ll poke his head out to chat, then a younger cook will ask a question and he’ll head back into the kitchen to answer it.

These days Charlie gives the cooks a bit more leeway, but he does admit to “guiding them through it somewhat,” especially when it comes to the soup and chili. “The green chili is fire,” he says. “Some woman put up on the Internet it was the best she ever had in her life.” Charlie smirks with pride. 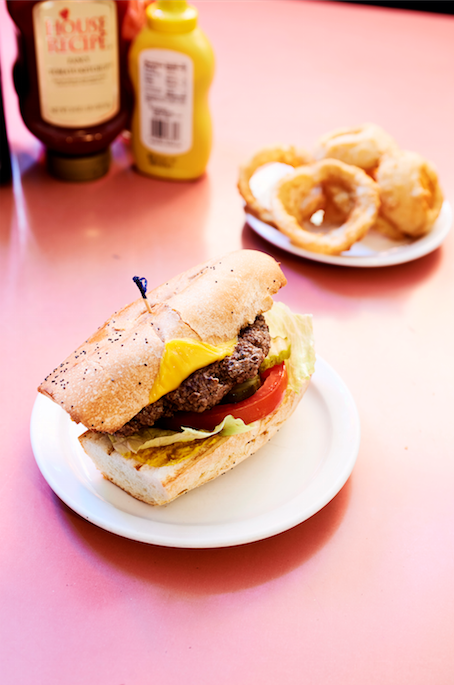 It sounds like a fairy tale that you used to be able to get a meal like this for a quarter, but Charlie remembers those days well. “Back then, you could get a pack of cigarettes and a gallon of gas and get change back from a fifty-cent piece,” he says. Still, though they’ve made some tweaks in the years since, for the most part the menu has stayed the same. “It’s been added to,” he says, “but it’s always had fried chicken, gizzards, liver, barbecue,” in addition to the famous burgers, of course.

Even though the menu hasn’t changed much, Rotier’s has hardly been shaded from the spotlight that’s been burning ever brighter on the city. Everyone from Jimmy Fallon to Robin Williams has popped in to see what all the fuss is about, and Charlie’s met them all. “I waited on Taylor Swift—I didn’t even know who she was.” Charlie’s not shy about all the attention— he’s just equally proud to see faces from this town as he is from Tinsel- town. “Channel 4’s been big here,” he says, raising his eyebrows, “but a lot of Channel 5 comes in too.”

The Elliston block has changed plenty since the early days, but not in the gradual way you might expect. “It all was about the same,” he shrugs, “until about ten years ago.” Since then, the place has exploded with construction, and the pace only seems to ratchet up every year.

After seventy years, they’re still leasing their space. These days, with so many sharks trying to make a quick buck by turning an old neighborhood block into a luxury condominium tower, leasing is riskier business than ever. Charlie figures they’re safe, for the time being anyway. “We’re pretty landlocked,” he says. But he does admit that Walgreens’ recent buyout of Rite Aid could spell trouble if they get any ideas about expanding the space next to them, where the Firestone used to be.

Still, Charlie’s confident that if other restaurants have managed to stand the test of time, his can too. 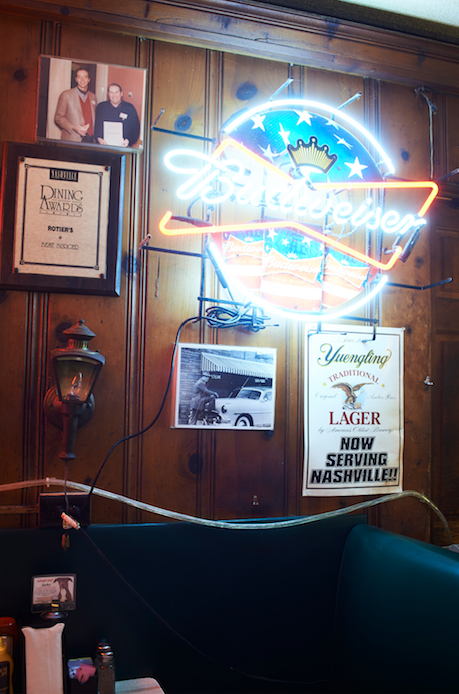 “Like Sir Pizza, near the police station on Charlotte,” he says. “That place has been there since I was in beauty school.” I laugh, he doesn’t. “Did you really go to beauty school?” I ask. He nods, “I cut hair for a while.”

The younger cook comes out to tell Charlie he’s done with the broth. “Al- right. Taste it,” Charlie says. “I have been,” the cook says. “It’s good.” He nods, sure of his work. Charlie swallows, then nods. “If you’re proud of it, I’m good with it.” He turns to me and shrugs, “I ain’t messing with nobody’s art.”

I ask why he thinks generation af- ter generation keeps coming back to Rotier’s, never tiring of the food or the atmosphere. “It’s a one-of-a-kind place, kind of like walking into an an- tique mall,” he says. “You’re gonna get fed good—and it’s not that expen- sive.”

The trick is, Charlie doesn’t have to spend a fortune on fancy ingre- dients to keep people coming back. The flavor comes from the soul of the place—in particular, the stovetop they’ve been cooking every burger on for decades. They don’t even put salt and pepper on their beef; it all comes from the stove. Charlie admits it might be nice to cook on a new one for a change, but we both agree—it wouldn’t be right. Some things should never change.