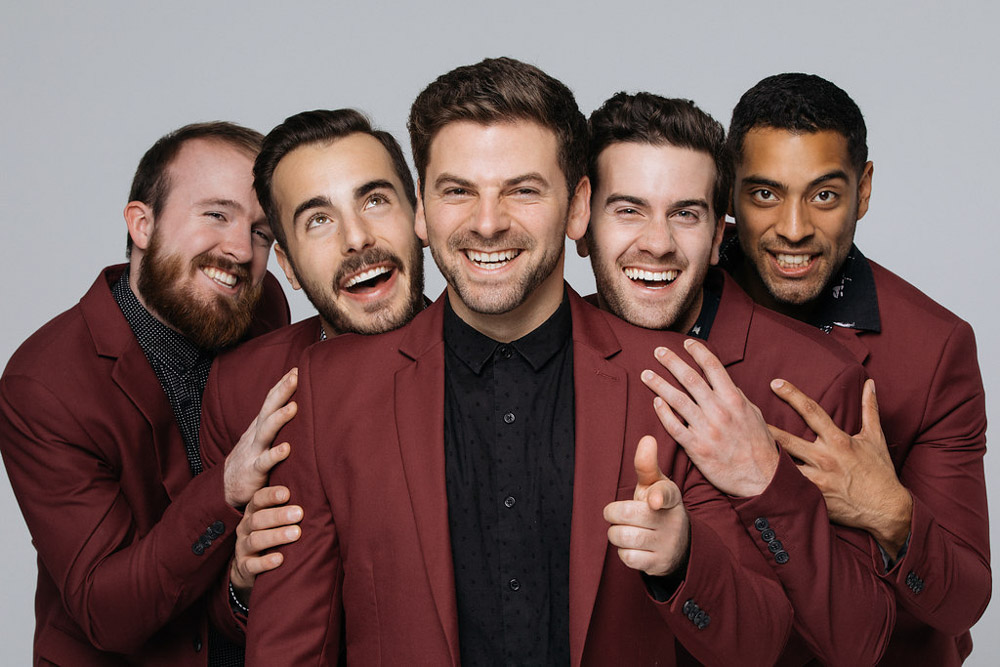 With Michael Jackson’s BAD blaring in the background, five lovable goofballs in maroon suits gather in a porcelain-white room for a group photo, moving in close so their heads almost touch in a ridiculously tight V formation.

“Let’s do this one absolutely stone cold,” says the photographer. The band com- plies, fighting hard the urge to giggle as they cuddle up for the camera lens.

A flash goes off a few times and they hold the pose, letting the moment linger just a beat too long, then break and howl in laughter as “Man in the Mirror” hits its stride.

“Hopefully it doesn’t look how it felt,” says Scott Schwartz, one of the group’s three main singers.

These are The Shadowboxers, a classic pop-loving quintet of Atlanta transplants who are still relatively new to the world of photo shoots. In fact, up until a few years ago they were just another band of bud- dies struggling to make their mark—albeit with a better sense of harmony than most.

Along with Schwartz, the group includes founding members and fellow singer-songwriters Matt Lipkins and Adam Hoffman on keyboards and guitar, plus a rock-solid rhythm section comprised of Carlos Enamorado on bass and Cole McSween on drums.

"IT'S NOT BOUT RELEVANCE, IT'S ABOUT WHAT SERVES THE SONG BEST." 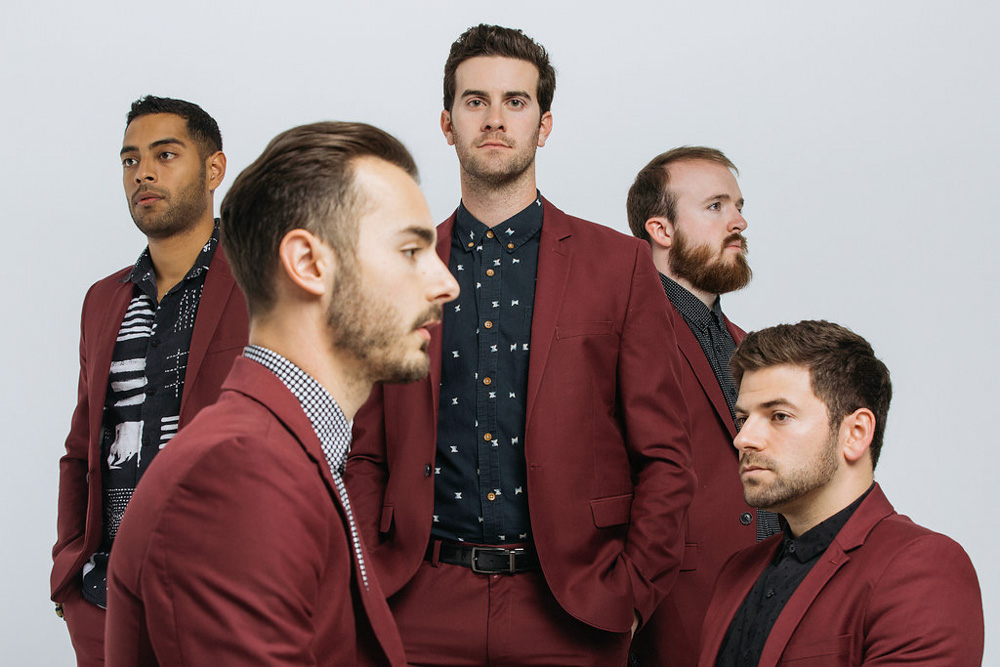 They’re anything but an ordinary band now, though, having been taken under the wing of one of the world’s biggest super- stars—Justin Timberlake.

Back in late 2013, Timberlake discovered the band after their YouTube cover version of “Pusher Love Girl” (the opening track from JT’s The 20/20 Experience) ended up in his inbox. He was impressed with the band’s interpretation and, recognizing some untapped potential, reached out to suggest a partnership.

Now they’re signed to his artist development label, Villa 40, studying as his soul-pop proteges. And on December 14, they’ll show Nashville what three years of apprenticeship can do.

Guided by their superstar mentor and spurred on by the attention he has provided, The Shadowboxers’ debut album isn’t even expected until sometime in 2017, but already they’ve released two dance-tastic singles and established a reputation for pure-fun performances. The most recent offering, “Build the Beat,” has nearly two million streams on Spotify, and this winter, they’ll headline some of their biggest shows yet on the EastWest Tour: five shows in coast-to-coast halls like The Basement East and Los Angeles’ Troubadour.

Back when the three principal members met as acappella-loving choral students at Atlanta’s Emory University, none of this seemed even remotely possible.

“When we first started writing, there was a lot of overlap in what we were into, but there were also a lot of differences,” says Hoffman, settling in with the band around a conference table after the shoot. “Our sound has only come together in the past couple of years.”

“Whenever we play a show, we hear somebody say, ‘Wow, I never hear anything like that on the radio,’” Schwartz adds. “That’s a compliment but it’s also really easy for us, because we’re just doing what we naturally do.” 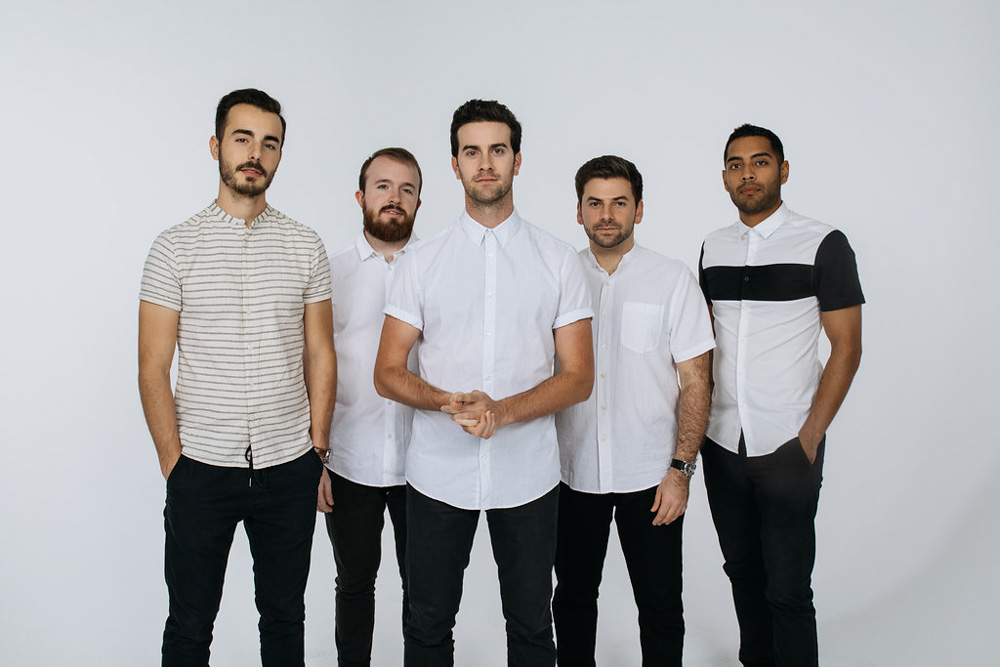 What The Shadowboxers naturally do is blend high-energy R&B, soul, funk, and pop with the effort- less vocal harmonies of groups like Simon & Garfunkel and The Beatles, and it’s true that there aren’t many traditional, five-piece bands in pop music anymore—which may be what Timberlake found fascinating.

“That’s always been our inspiration, from Crosby, Stills & Nash to the Bee Gees or Hall & Oates, that kind of sound. And then on the soul side, it’s D’Angelo, Prince, and that stuff,” says Schwartz. “The first thing that really bonded us was the fact that we put our voices together and liked the way it sounded, so we think of that as its own lead singer.”

So far the guys have been known as live-show specialists, pumping out epic and unique covers of pop and funk classics. They self- produced one album of originals in Atlanta but found it hard to gain traction outside their local scene. Running out of options, they decided to start a YouTube cover series— a move that would change their lives forever.

“We had finished up an album cycle, if you can call it that,” Lipkins begins to explain, before being interrupted by his pals.

“It was a small cycle,” says Schwartz.

“A unicycle!” Hoffman adds, send- ing a wave of belly laughs around the table.

“We were just trying to figure out a way to reach people,” Lipkins continues, getting back on track. “So we started doing this cover series, and we would alternate month to month with an old-school cover and a new- school cover. The 20/20 Experience had just come out, and we were all really excited about ‘Pusher Love Girl,’ so we recorded it.

“It was so weird because it was just another day for us,” he goes on. “I was wearing a handlebar mustache—it was Movember—and I had just broken up with my girl- friend so I didn’t care, and Carlos is super hungover in the video.” 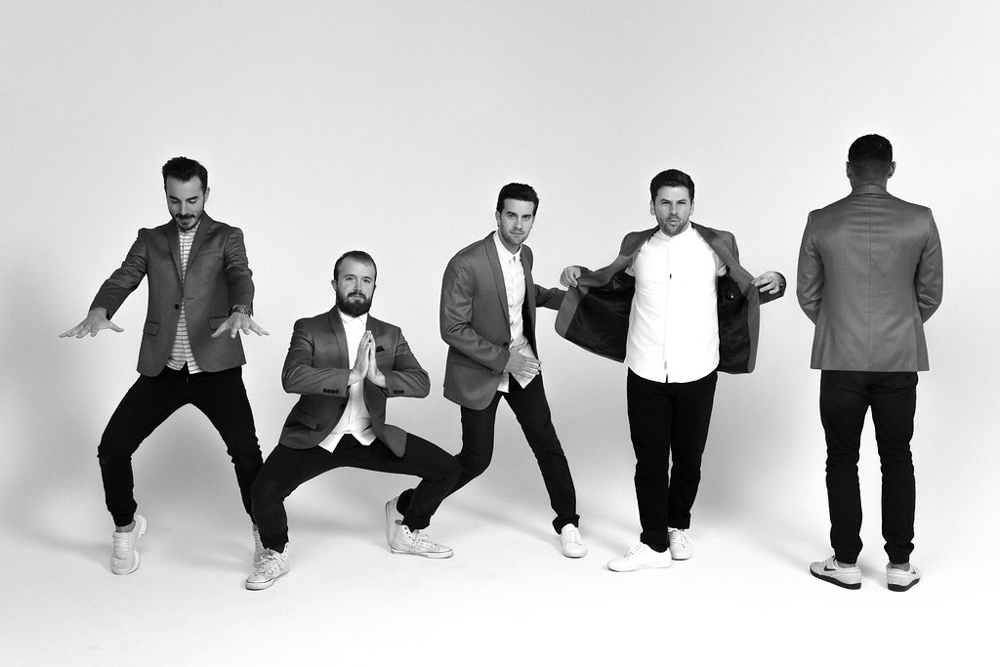 “We had one mic set up in the room and we would just lay the songs down live,” says Schwartz. “It was just, ‘Let’s do what we do with songs we love.’ So we did a Paul Simon song and then one by Haim. Then we did a Stevie Wonder song, there was no rhyme or reason to it, and all of a sudden [Timberlake] just found [the cover of ‘Pusher Love Girl’]. We still don’t know how, and he tweeted it out with a nice message.”

While Timberlake’s original version is an eight-minute opus full of digital effects, The Shadowboxers went for a straightforward, do-it-yourself approach, building up tightly woven three-part harmonies and exposing the core the song. One camera, one take, one career-changing moment.

JT’s tweet to the band read, “Every once in a while, you come across something. This is GREAT, fellas. Took it and made it your own. I’m humbled.” And a week later, he called to make a more direct connection—apologizing because it was a Sunday, no less.

“He was like, ‘I want to help you guys any way I can. I’ve gained all this knowledge throughout my career, and I want to give back and help you guys avoid some of the mistakes I’ve made,’” Hoffman recounts.

So what does it look like when Justin Timberlake backs your play?

“Our relationship with him is amazing and it’s pretty much purely creative,” says Hoffman. “Ever since we met him he was just like, ‘Write, write, write and demo ‘em.’ So that’s what we’ve been doing for almost three years: write a song, demo it and send it to him, then he sends back feedback and we tweak it. We have like ninety demos at this point.”

With those demos in hand and their songwriting dialed in (Timberlake has encouraged them to imagine each one like a hit that already exists, so as not to overthink things), the band and their hit-making guru entered Los Angeles’ legendary EastWest Studios in August— another unbelievable turn of events. With Timberlake calling the shots, they began working in the room where The Beach Boys recorded Pet Sounds and finished up in the space where Frank Sinatra sang “New York, New York” and “My Way.”

The guys have at least one more wave of high-stakes studio work to do, but their mentor has made the transition from talented cover band to pop-stars-on-the-rise a smooth one.

“His vision in the studio is incredible,” says Hoffman. “Just getting to see him work and the way he operates in a studio is like magic.”

“It’s really like nothing else,” Lipkins adds. “He’s got this energy. He’s like, hyper-focused while simultaneously being so spacey. He just hears what it could be and then you can watch him process—he’ll just pace for a minute, and then it comes to him. And the great thing is it’s not contrived at all. He’s basically sit- ting there saying to himself, What would I like? How could I make this song better?”

“There’s no hesitation and there’s no right or wrong,” says Hoffman. “And it’s not about relevance, it’s just about what serves the song the best, which is so refreshing in today’s world, especially the pop world.”

That confidence has had a hugely positive effect on the young band, but so has the amount of creative freedom they’ve been given. Timberlake pops in and out during recording sessions, but for the most part they’re trusted to find their own way.

“I think the way he discovered us was an indication of what we experienced in the studio,” Hoffman explains. “He liked us performing a song around one mic, just doing what we do with no bullshit.” 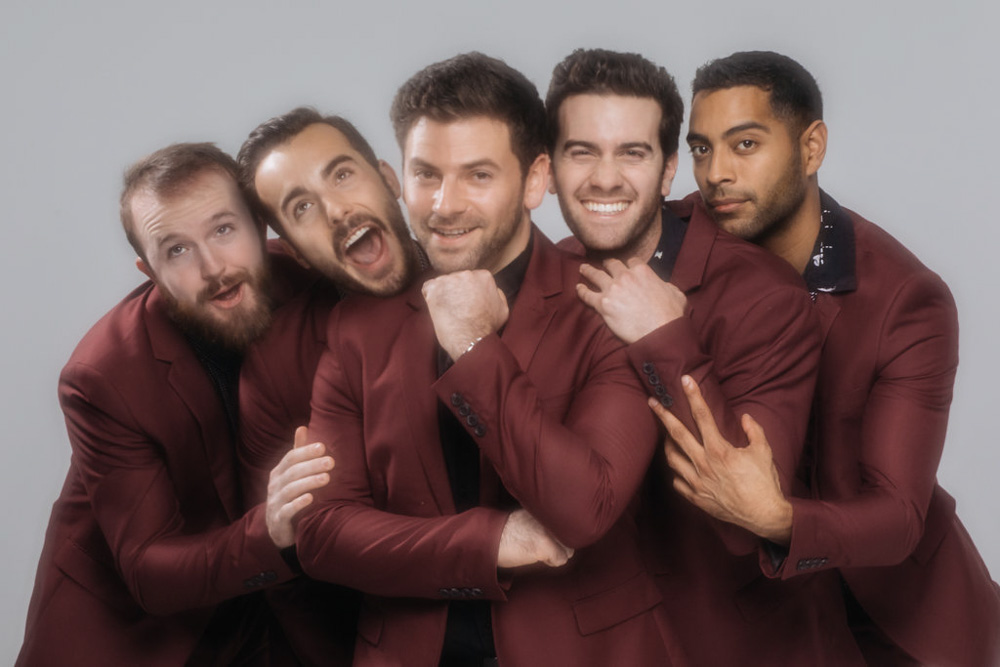 “He made it clear in the beginning, which was a big point for all of us, ‘Don’t join me on this ride because I am who I am. I think we should do this because it would be a great creative match,’” says Lipkins.

The two singles released this year were actually not produced by JT, but they are a solid representation of what’s to come. “Build the Beat,” a propulsive ’80s pop delight filled with Brat-Pack synth and MJ swagger, was cowritten by the band’s three singers, while “Woman Through the Wall” feels more dangerous and sensual, cowritten with Kopecky’s Gabe Simon and highlighted by the hook “She’s got seventeen pairs of Jimmy Choos / And another two on the way.” Both are chock-full of breathless dance-floor energy.

“They’re similar [to the new music] because even though they’re modern, they’ve kind of got a throwback vibe, which you also get from the stuff we recorded in L.A.,” says Lipkins. ”I think we’re gonna be moving in a direction where you’ll see how the ’70s and ’80s are a direct influence, but also more contemporary influences as well.”

“It’s less about a vibe and more about putting some chords and a melody together that make you excited,” Schwartz says. “That’s where the energy comes from, and we don’t write songs anymore that don’t melodically give us excitement to sing. We just want to make the song as catchy at every point as we can.”

For now, the group is focused mostly on quick tempos and hip-shaking grooves, although as a true soul and R&B band, there are lots of fresh new ballads they’d love to play during the upcoming EastWest Tour. But that will have to wait.

“Right now, the show has just been an energy fest,” says Schwartz. “We added choreography, we’re wearing fancy suits, we’re just trying to turn it into an experience all across the board so people leave saying, ‘That’s a show I had a great time at, and I want to come back.’”

That sentiment is sure to make their teacher proud. But in fact, The Shadowboxers have already had the desired effect on Nashville fans, even without much in the way of original music. Last year the band hosted a sold-out five-night residency at The Basement East, bringing out big-name guests like Chris Stapleton, Maren Morris, Reba McEntire, and Little Big Town’s Karen Fairchild and Kimberly Schlapman for cover-happy theme nights, showing the breadth of their sound and just how much respect they’ve earned so early in their career.

When they come back to the venue on December 14, it will be a triumphant return—but with new tunes and the wisdom gained from Timberlake’s training, it’s sure to be a Shadowboxers show like this city has never seen before. Luckily, Timberlake University is not one based on oppressive conformity. They’ve lost none of their sunny irreverence.

“We did a bunch of shows there, but they all had themes,” Lipkins explains about the upcoming gig. “We’re excited to just play a regular frickin’ show where we do our thing. No gimmicks, just The Shadowboxers.”

Then there’s a pause, with the familiar feel of a punchline hanging in the air.

“Actually, there will still be gimmicks,” he says, cueing another round of belly laughs and talk of flaming keytars.