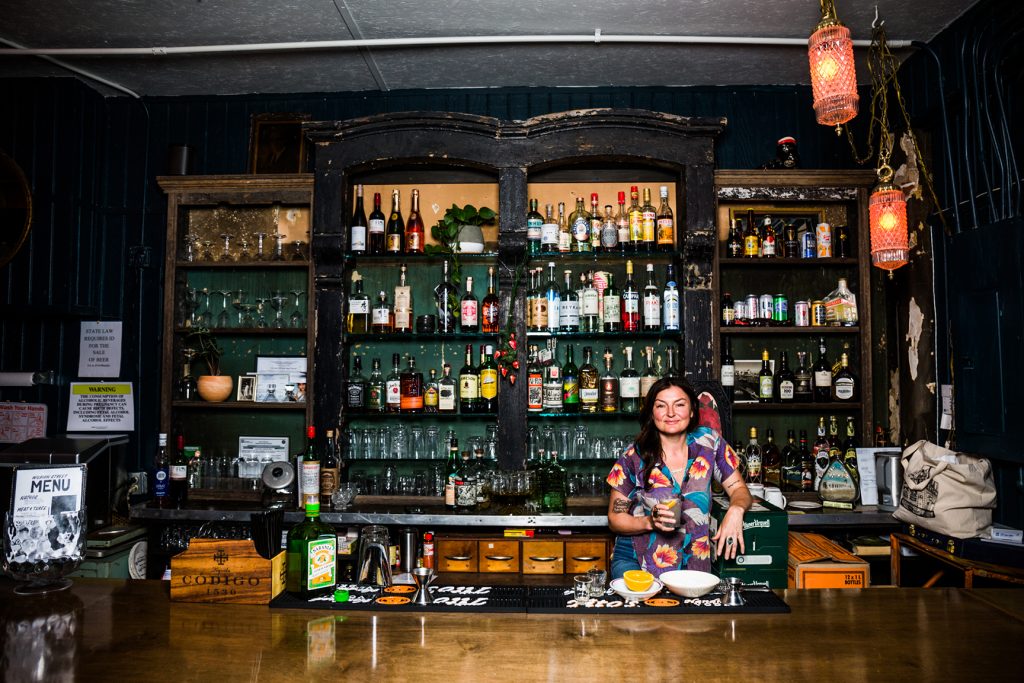 What makes the perfect bar? The well-considered jukebox with your favorite song? An expertly crafted cocktail? It could be that bartender, the one who knows what you need—a supportive ear or a shot of the strong stuff—before you even know yourself. Or maybe it’s intangible. It’s got this vibe that’s hard to describe, but it feels so good walking through that door. The perfect bar feels like home.

It’s the hottest day of the year. A short walk down Wilburn Street and already I’m gross and sweaty. The faded sign above the door to the Wilburn Street Tavern features a snow-capped mountain, and when I escape the bright hotness and get into the air-conditioning, it’s like arriving at the summit. It feels so good walking through the door.

I sidle up to the bar and introduce myself to Teresa Mason, owner of Wilburn as well as the massively popular Eastside staple Mas Tacos Por Favor. Mason invites me in with a wide smile and a lingering handshake, right hand embracing mine as the left hand comes in for a gentle shoulder squeeze. I’ve never had someone hug me using only their hands until now. Mason guides me to a quiet corner and a maroon vinyl booth. 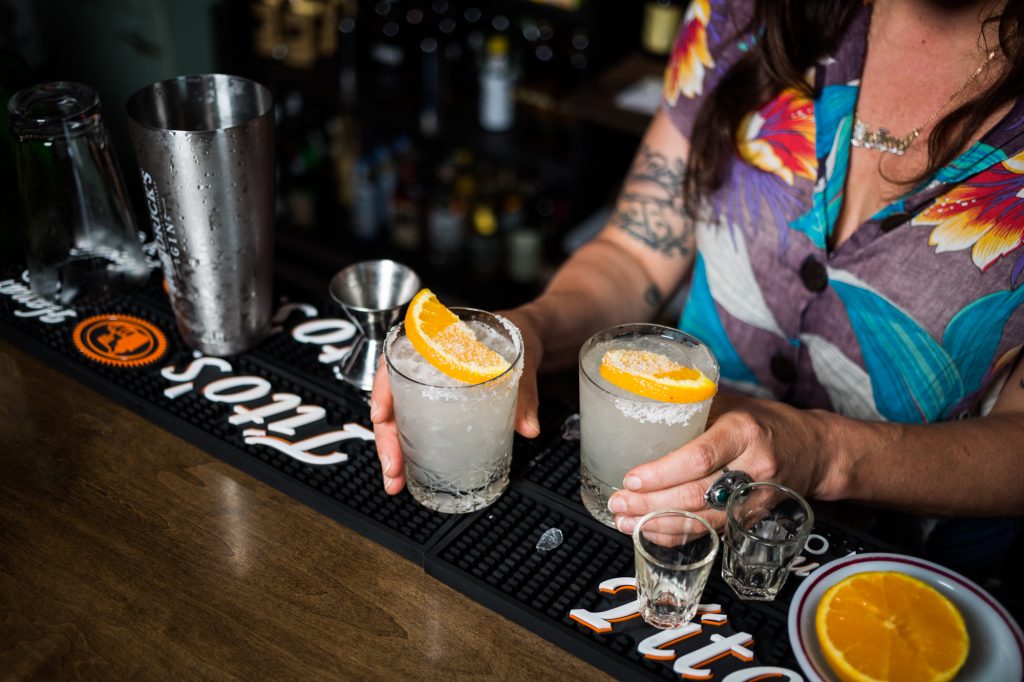 I’ve only just arrived and already I don’t want to leave. I can’t quite put my finger on why. The chilled air doesn’t hurt, but I’m pretty sure I’d feel the same regardless of the heat index. It must be the company. Though she’s a gregarious and lively storyteller, Mason says interviews aren’t her favorite, which explains why my research (a.k.a. googling her name) didn’t yield much in the way of a backstory. I’m curious, and thankfully she’s willing to share.

Mason’s a Nashville native, born a bit east of town in Carthage. As a youngster, she spent time in McFerrin Park, the neighborhood surrounding her bar. “I went to grade school right down the street,” she recalls, gesturing toward Glenn Elementary directly across Wilburn. “I went to high school on Dickerson. I went to college in Murfreesboro.”

She was raised by her grandmother, Ms. Gladys Dimple Williams, who had “a strict style of cooking,” Mason tells me. “[We] ate very Southern sorts of things, like what you’d get at a meat and three. Those are the things we had every day—some sort of fried, cooked-to-death vegetable.” The greens might’ve been stewed for days, but grandma’s home cooking taught Mason critical lessons about food, about love, about life. Gladys showed her granddaughter the joys of “loving the experience of food, the experience of hospitality, and what it means to sit down with each other and have these things.”

After getting her degree in journalism from MTSU, Mason was ready to see the world beyond the Cumberland Basin. Despite having never been there, she made her way to New York City—Brooklyn specifically—and moved in with a friend of a friend. As you might imagine, or may have experienced yourself, life in the city gave Mason a taste of the world. All of the sudden new flavors were everywhere, whole new categories of cuisines, new takes on familiar foods. “It was like, ‘Oh I’ve never had a green bean like this.’ Or, ‘I’ve never had kale or collards done this way.’ Or, ‘There’s texture to this! Weird!’”

New York is a city of broken dreams. You see it in Nashville too: people come from all over the world, certain that it’s their time, but the reality is that not everyone can get the big part or the record contract, and countless dreams end up shattered or just out of reach. Teresa Mason, photojournalist. It has a nice ring to it, right? And she was making it happen, working as a photo assistant, color correcting, running negatives. But all the people Mason worked for were older than her, and she was lonely. “After a couple years, I was stagnant . . . I kept thinking to myself, man, if I could just bring one person with me, this would be the dream of my life. But you can’t bring one person with you. That’s part of it. You just have to do it.” 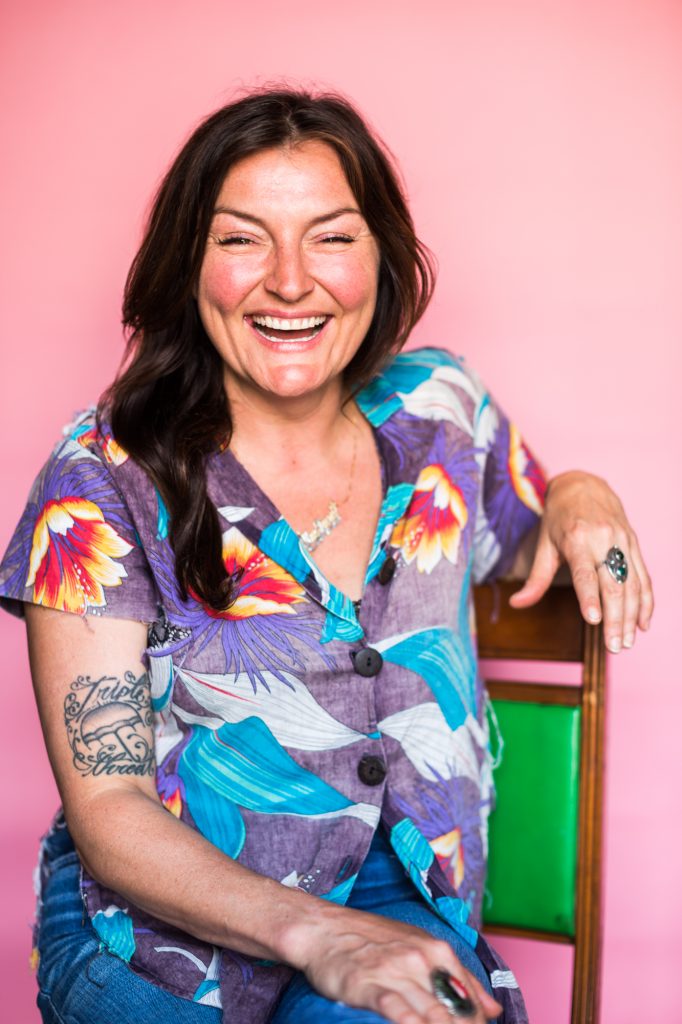 When Mason left Nashville, she was clear on her goals. “I thought I would never work in a restaurant again,” she chuckles with a knowing smile. “In my mind, I was very proud of myself, ‘cause I always worked in restaurants [during] school. Now I’m done . . . I’ve got a degree. Of course I don’t have to work at a restaurant!” And the fact is, she didn’t do it for the money, like so many of us do (this writer included). “I got a job back in the service industry almost to meet friends, really.”

Zeppelin bleeds off the concrete walls. There’s nothing better than getting the Led out and having an ice-cold drink on a hot day. Mason relays the lessons from her days (and nights) running front-of-house jobs in the New York food scene. “I worked for the people that ran those kitchens, for incredible chefs. And I saw the struggle and the heartache they would put into making sure everything was right.” Grandma Gladys taught Mason the joys of hospitality, but New York chefs showed her the pursuit of perfection.

“I do think that time period was good for me,” Mason says of her years in New York. “Because my skin got a little thicker. I got more independent . . . That’s where I became an adult, a whole person.”

She also had the opportunity to travel and ended up spending many months in Mexico. It was during one of these trips that she had the epiphany that would lead to Mas Tacos. “It was watching families run fondas, or little taco stands. I’d see them sort of shopping in the morning, working in the afternoon, and then hanging out at night.” Mason acknowledges her perspective could be a bit romanticized, but “it felt to me like they had control of their day. It felt like they had this ultimate freedom. It felt like they were very much in charge of themselves.”
Mason returned to Nashville in 2008. “It was hard to leave. It was hard to come back here,” she shares. But she had a plan. “I chose to come back to Nashville because I knew I wanted to do something very small. I wanted to be able to handle it.” Knowing she wanted to work for herself, Mason felt Nashville offered a better chance of succeeding with a small-scale venture. “Less of an incline,” as she succinctly puts it. When she started the Mas Tacos food truck, she took to heart her life lessons: the model of a strong, independent woman from her grandmother Gladys, the chefs of New York and their passion for ne plus ultra cooking, and the freedom of the families who ran the Mexican fondas. 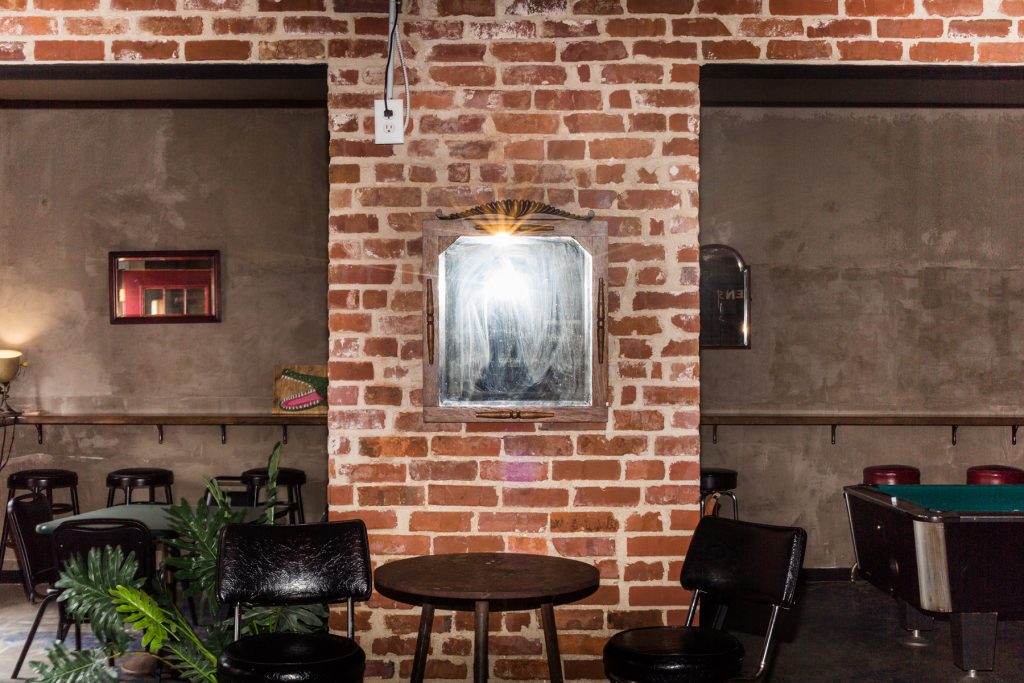 “I don’t want to get too big for myself. If I can do something very small, make one thing really good, then it won’t matter where I do it, and maybe people will come for it.” This is the philosophy that led Mason from sought-after food truck to destination taco shack, and finally, to the Wilburn Street Tavern. She’s now a forty-one-year-old restaurateur (“Ah fuck, forty-one. Here we go,” she laughs) ready for a new challenge. Plus, she explains with great satisfaction, “The crew at Mas Tacos is stupendous. I mean they are just fucking killing it and doing such a wonderful job. Last year was the first time I really felt like, ‘Oh fuck! They don’t need me!’” When she quotes herself, Mason ups her register to this squeak of a voice. We’re talking Alvin and the Chipmunks falsetto highness. It’s hilarious and endearing.

Rather than starting from scratch, Mason is stepping into a bar that’s already existed for decades. There was Lady T’s Tavern and some years as a biker bar, but mostly it’s been Wilburn Street Tavern. Mason knew the bar and the owner, Miss Paulette, who is a beloved neighborhood fixture. There are plenty of places in Nashville with history like this, but usually when ownership turns over, they get stripped down and rebuilt to the point of being unrecognizable. Mason has decided against radical changes: “It had already been a wonderful neighborhood bar. [I want] to keep it that way ideally. Of course it’s changed some. Hopefully not so much that it hurts anybody.

“We left the bones, opened it up a little bit,” Mason says, gesturing around the space. “Tried to make it a little more comfortable . . . People come in and are like, ‘Oh you didn’t change a thing.’ And other people are like, ‘Holy shit! You changed everything!’ It’s somewhere in between that.” Miss Paulette only served beer; Mason has added a liquor license, and she speaks in a conspiratorial sotto voce, “I just. Enjoy. Liquor. More than beer.” I turn around, wondering if Miss Paulette might’ve entered and Mason is trying not to hurt her feelings.

The biggest upgrade Mason didn’t make: there’s no kitchen. Not a real one anyhow. And that’s just fine. “[It’s] a blessing for me. Because what was I thinking when I started? I didn’t wanna start another restaurant. I wanna come and hang and be here. In the long run, I think it all worked out really well.”

Without an oven or range, Mason still manages to deliver some solid bar food. Though it might be simple, she takes it very seriously, and she tells me sternly, “They’re just fucking nachos, but I want to be consistent. You know what I mean? I want them to be what they are.” Hot dogs also feature on the five-item menu—actually, three of the five items are hot dogs. Mason’s particularly fond of the Sonoran, a bacon-wrapped beef dog with beans, lime mayo, and pico de gallo. She got so excited about the Sonoran that at one point it was going to be the only available item. With glee, Mason nearly shouts, “I was like, ‘We’ll just do that! We’ll have one thing!’”

The Wilburn Street Tavern is small. “I know they used to do shows here,” Mason recollects. There’s no stage, no lights, no PA. There’s barely room to play around the pool table. “Maybe if you’re an unpopular band, you can come and play here?” she says with a laugh. If your perfect bar has live music, you’re out of luck at the Wilburn.

Mason has no qualms about the limited scope of her new place. It’s just, as she says, a bar. There’s an appealing modesty to it, and remarkably, given her success, to Mason as well. “That’s another reason why I sort of avoid interviews,” she explains. “In my heart, it’s not such a big story.” 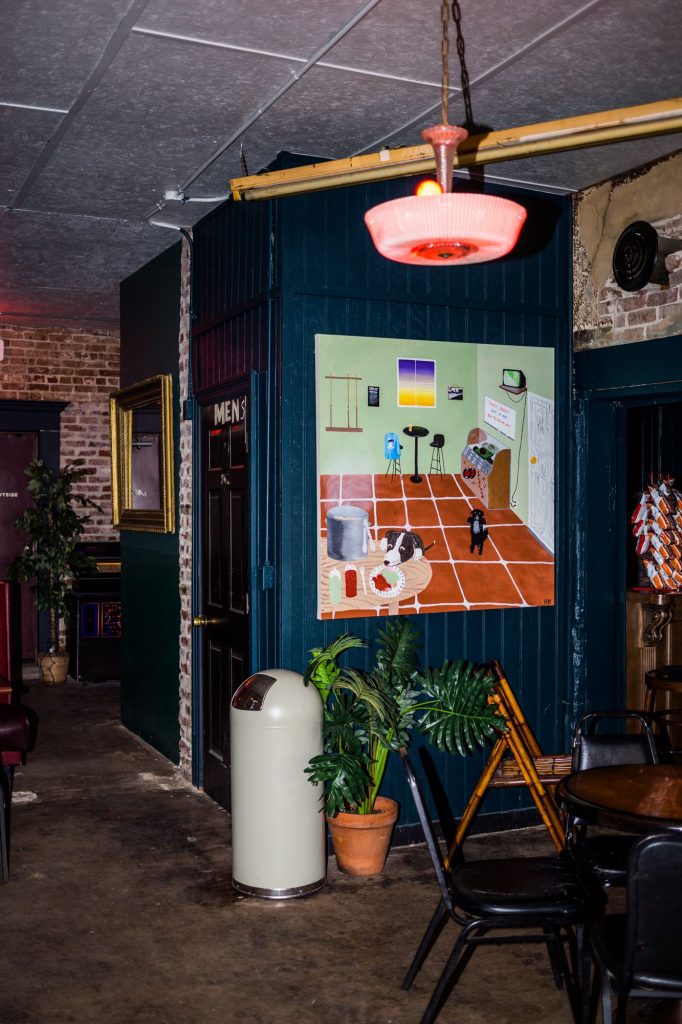 What makes the Wilburn Street Tavern so effortlessly relaxed? Some of it is the space itself, sparsely decorated, mostly with art featuring alligators. But the guiding force is Mason’s vision. This is her idea of the perfect bar. “This is what I think it should look like. This is what I think it should feel like. This is the music I wanna hear. This is how I think a chill place should be run.”

But that goes beyond the walls of the bar.

“I feel like we need to get as much of that in Nashville as we can. I’m from here. I love it here. I wanna stay here. There’s all those stories about the things we don’t like about what’s happening—let’s focus on what we can do, and focus on keeping our neighbors here, keeping places to eat, places to hang. Keeping good handshakes.”