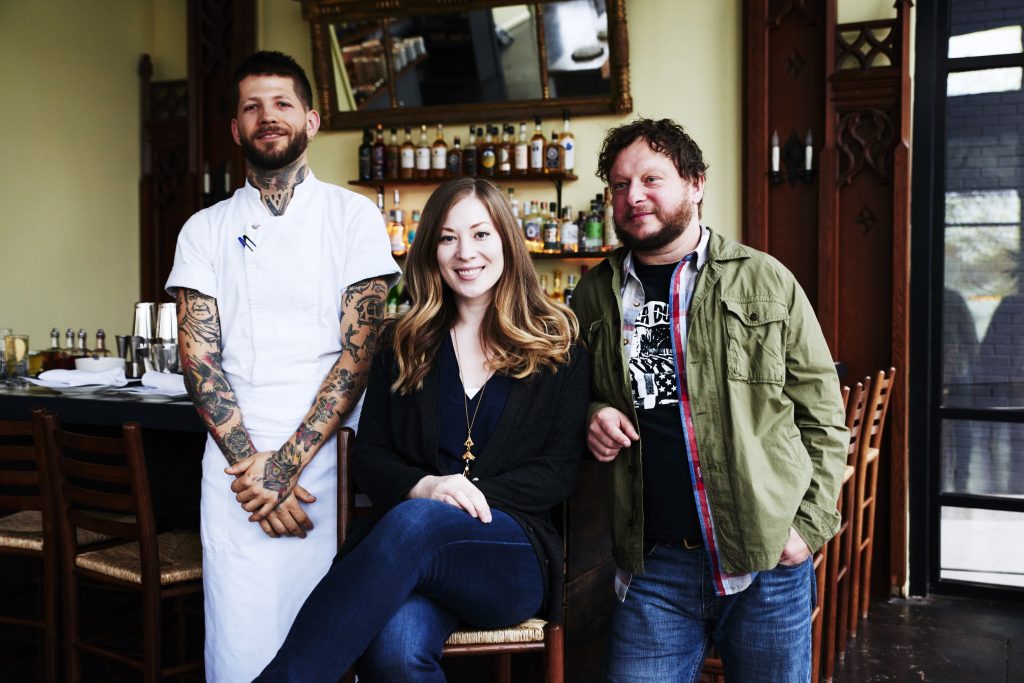 We should clear this up first: tacos aren’t from Spain. I’m chatting with the three co-owners of Peninsula, a restaurant-shaped love letter to the cuisine of the Iberian Peninsula. Chef and co-owner Jake Howell loves the food and drink of Spain and Portugal in part because it’s not as well known here. But he’s found that brings a potential for misunderstanding. “For some reason, in the US, it’s a reasonably overlooked cuisine. To no fault of people, you say ‘Spanish,’ and they’re like, ‘I love tacos and burritos!’—which is completely wrong.”

Peninsula’s other co-owners, wife and husband team General Manager Yuriko Say and Bar Manager Craig Shoen, worked with Howell at The Walrus and the Carpenter, a highly esteemed Seattle eatery. When I ask why they left, Say gives a diplomatic response. “Let’s just say that, to start, we’re all very happy to be living here and not in Seattle anymore.” Schoen adds his opinion, with many unprintable curses to the same effect. Say and Schoen had moved from New York to start a restaurant in Seattle, but the economy tanked and their chef walked, along with his investment. That left them, as Say puts it, “playing with other people’s money for the better part of a decade.”

Lacking a ladder to climb and tired of Seattle (you can ask Schoen more about that), the trio began a nationwide search for a new home. Say is a San Francisco native, and she and Schoen still had connections from their years together in New York, but neither city seemed possible for starting a restaurant. Say recalls, “It was finally time to make our dream happen, and we knew it just wasn’t feasible in Seattle, New York, or San Francisco, three of the most expensive cities in the country.” Finding Nashville took a nudge from a former Seattleite who’s now established herself as one of Nashville’s leading young entrepreneurs. 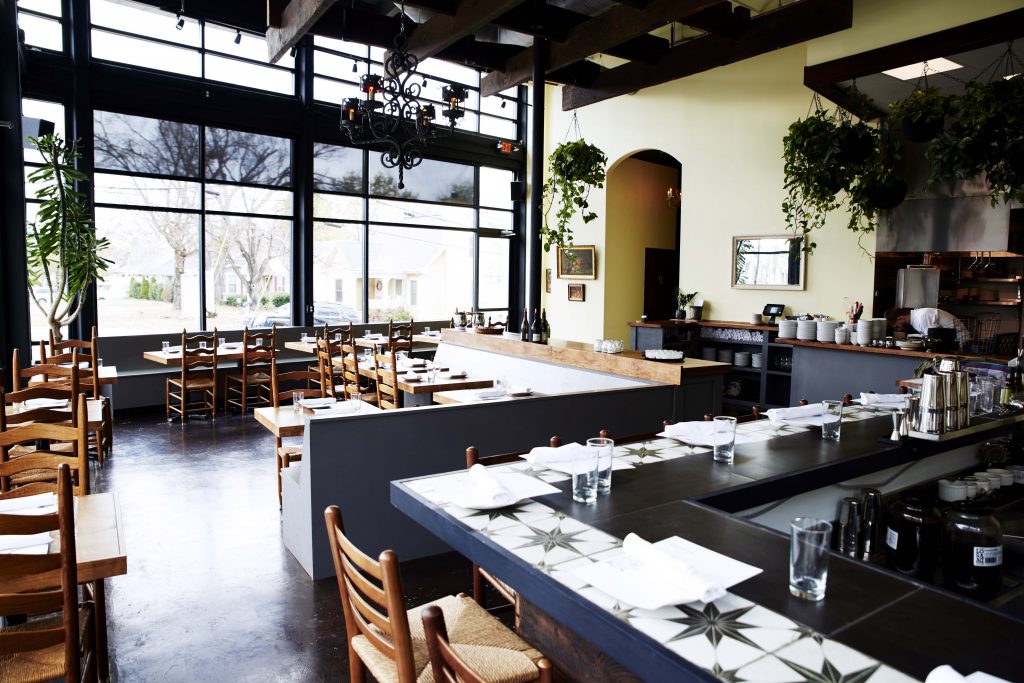 During his Seattle years, Schoen played in the alt-country band Legendary Oaks for seven years alongside his friend Brooke Asbury Allison. A few years ago, Allison moved to Nashville, where she first opened Hot Yoga of East Nashville, followed by a string of successful Scout’s Barbershops. Allison planted the seed for Nashville as an attractive, affordable option for their venture, and when Schoen ended up in town for a business consult, he was smitten. “I just fell in love with the opportunity. Not just the city, but the tremendous opportunity that exists here. In three days, I met half of the chefs in town that I wanted to meet—half the bartenders I wanted to meet. Everyone was super supportive and psyched about it, as opposed to weird and competitive.”

With Schoen on recon, Say and Howell talked, agreeing it was far past time to tackle their own project. Say laughs about Schoen’s return. “I could tell when he came back from that trip, he was about to launch into this sales pitch, like, ‘Nashville, Nashville!’ And everybody’s like, ‘Know what? No need, I’m totally on board.’ I don’t know why! Jake [Howell] and his girlfriend, Sophia, and I had literally never been to Nashville before we arrived.” Schoen adds with force: “They’d never been to the South!”

The move was clearly an easy decision. The time between their relocation and opening Peninsula’s doors last month was, the trio reports, not at all easy. They managed to find the perfect space, an intimate room with less than forty seats, in a perfect location on West Eastland near its intersection with Gallatin. But even with a space to call their own, there was no corporation with million-dollar pockets prepared to finance the build-out. The trio embarked on more than two months of backbreaking work. Say kept asking herself, “When can we stop playing construction crew and actually do what we do for a living? We want to play restaurant! That’s what we came here to do!” 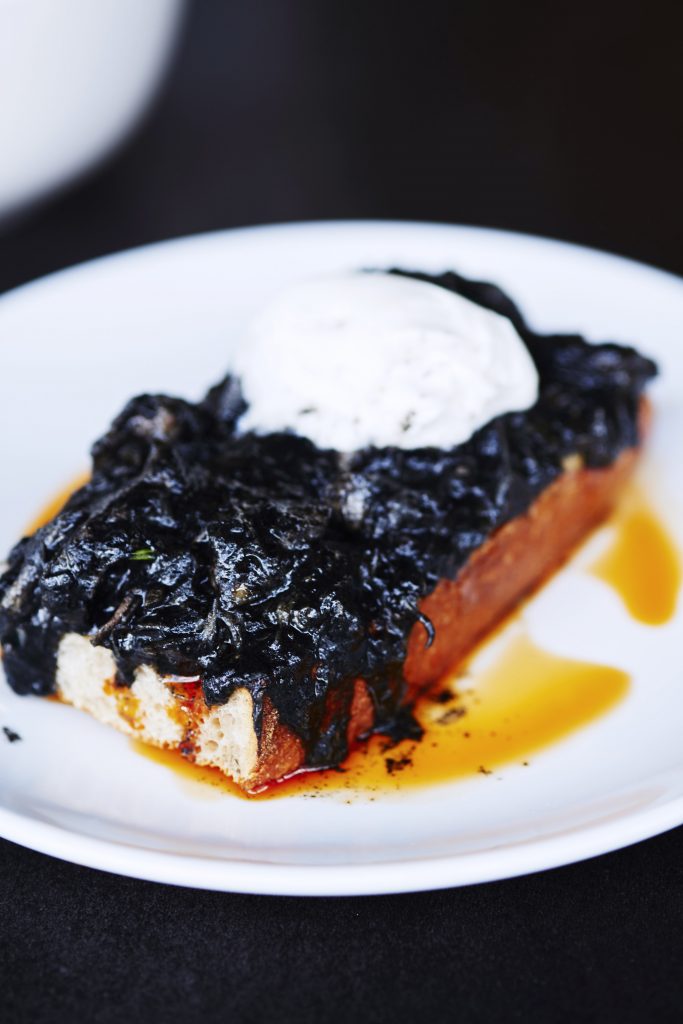 Howell chimes in with a sigh. “I would say the last three weeks were at stress level seven million. It starts to reach a point where it’s like, alright, this sort of feels like I’m on a hamster wheel. Not going anywhere. It’s not getting any closer.” Still, the team found their creative spirit; Howell points out that he and his father tiled both the bathrooms and the bar, which makes Say smile. “We always knew that we wanted an actual partner for our chef. We didn’t want to hire a chef, we wanted someone who’s actually going to be in the thick of it with us.” Howell gets big laughs when he realizes they wanted “a guy that would tile the bathroom and make a steak the next day.”

And what a steak he would make. Now that Peninsula’s owners are done absorbing carpentry tutorials on YouTube, they can finally focus on their true expertise. Initial concepts for their dream restaurant were more seafood focused, but they’re not in Seattle anymore. Instead, they looked for a place in history where they might find a strong link between inland Spanish/Portuguese and American food traditions. Schoen lays it out. “We started geeking out over it. Alright, well, we’re not gonna be on the coast, so let’s see what people were eating a hundred and fifty years ago in the middle of Spain [and] Portugal. It’s not that different than what people were eating in the middle of the United States one fifty, two hundred years ago. You ate what you shot. You ate what you harvested. Usually you had a pot to throw it into.”

The distant countrysides also shared a common element that now runs through Peninsula’s menu: limited spices. “Americans a hundred and fifty years ago didn’t have any spices, and Spanish and Portuguese are known as people that don’t use any spice except for salt and pimenton,” Schoen says. 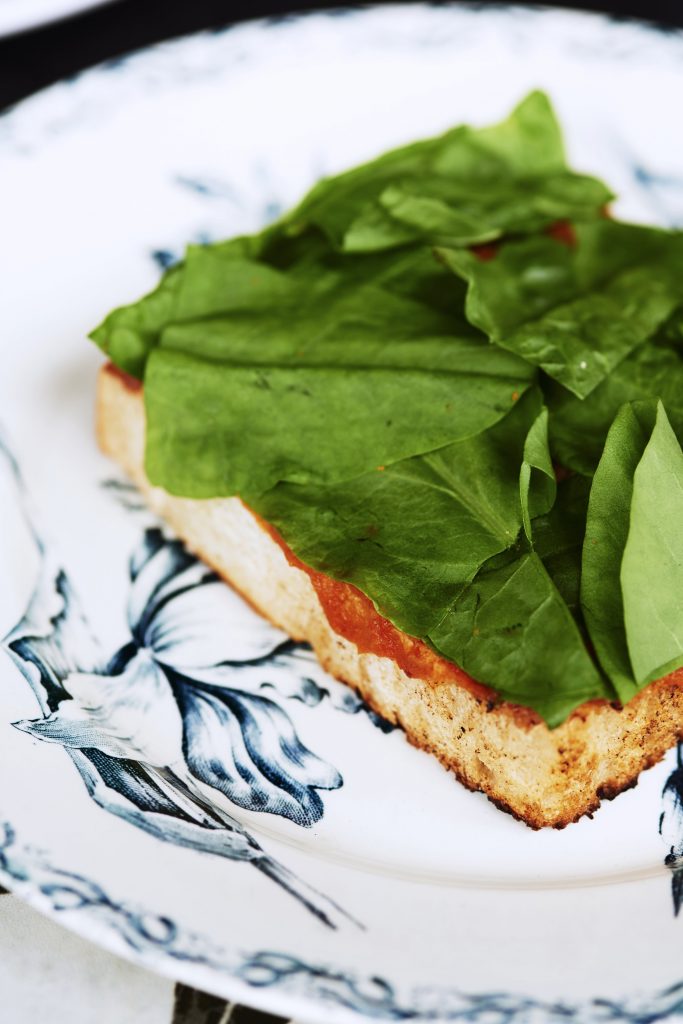 Howell’s menu lets the core ingredients speak for themselves. The chef explains that it’s a natural evolution of his cooking. “I never cooked with a lot of spices, so it wasn’t a challenge to just sort of eighty-six that out. Most restaurants, you look and they have like seventy-five different spices. We have”—pause for dramatic effect—“none.”

Howell makes his food pop in other ways. Peninsula has only been open a month, but diners already have a clear favorite in the Springer Mountain Farm chicken liver mousse with tomato toast. Smokiness from the charred edges of the toast give this best-seller a rich dimensionality that a straightforward cracker would never achieve. An appetizer of puffed beef tendon with a hint of lime turns the usually chewy tendon into a crisp chicharron with an umami crunch and soprano high notes of citrus. Howell serves his catfish with an egg, pulverized sourdough, and a remarkable coriander-cilantro broth, which Say gushes over. “You have a broth that seems really, really simple. And I can’t tell you how he does it, because he likes to keep some of it secret. But that broth that seems really simple goes through four different phases before it’s actually ready to complement a dish.”

Schoen jokes that he uses more spices at his bar than they do in the kitchen, which I believe after looking over Peninsula’s menu of complex cocktails. Beyond the staples of Spanish and Portuguese wines, Peninsula also features a gin and tonic menu that offers imbibers an opportunity to sample lesser-known gins paired with unusual ingredients like fermented blackberries, bergamot, and cinnamon. Say wasn’t on board at first: “I was like, ‘Seventeen different types of gin, Craig? Really? Seventeen?’ But I was wrong—people are going crazy for it.” 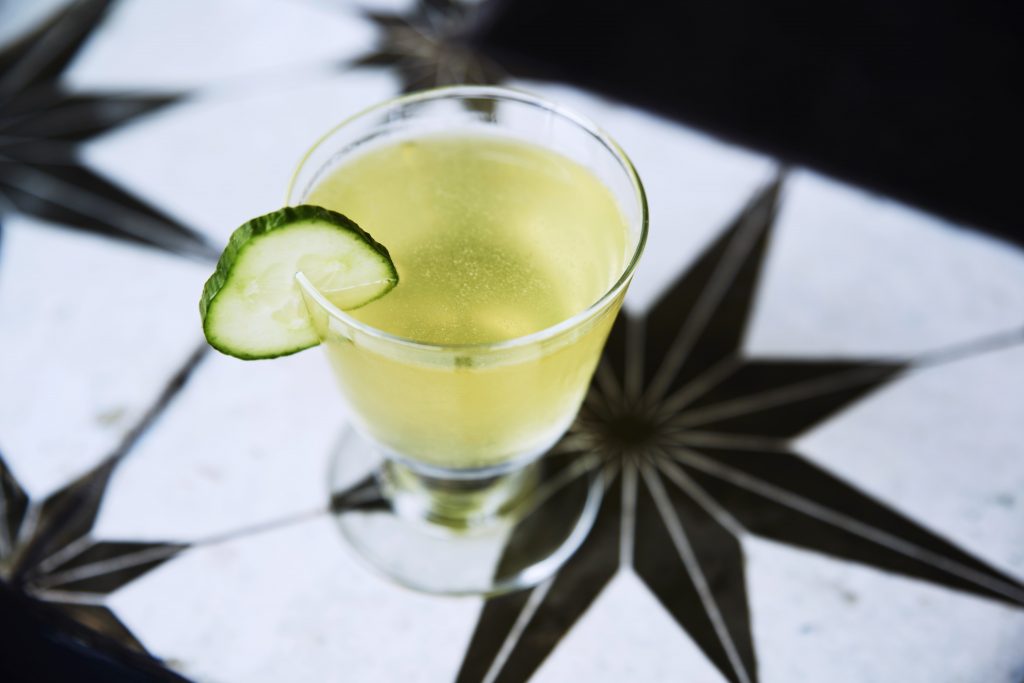 Like nearly every Nashville chef I’ve interviewed over the last few years, the Peninsula team calls out the generous nature of our city’s diners and fellow restaurateurs alike. Schoen recalls his immediate and long-lasting friendship with No. 308 bartender Jaime White. “That’s how fucking nice people are. And talk about wanting to learn about shit! Here’s a guy with intensive experience who openly admits there are things he doesn’t know. That’s awesome! That’s humbling! Everyone pretends to know everything in New York, San Francisco, and Seattle. That’s the key, right? No one’s tasted it all. No one’s seen it all. That’s stupid. I thought that way for a long time. But once I got out of New York, it was like, ‘Oh yeah, that’s not really the case.’”

Peninsula’s décor reflects the humility that Schoen espouses. There’s nothing fancy, just large doses of greenery and antique elements. Floating beams above the dining tables are 16th-century poplar. A line of hanging plants create a natural wall separating the small kitchen from the rest of the interior. There’s a warm friendliness to the space that matches the welcoming, hospitable nature of its owners. And Nashville is responding to that hospitality.

“It’s been such a continuous pleasant surprise at how open people are to being adventurous, to being like, ‘I’m here for an experience; guide me through it,’” Say explains. “I find it to be a much more gratifying work experience too. There’s just been this big reminder for us with moving here like, Yeah, this is why I wanna do this. This is why we love hospitality, because we actually enjoy serving people and giving them an experience. Southern hospitality is real!”

Peninsula is open Tuesday through Saturday from 5 p.m. to 10 p.m.