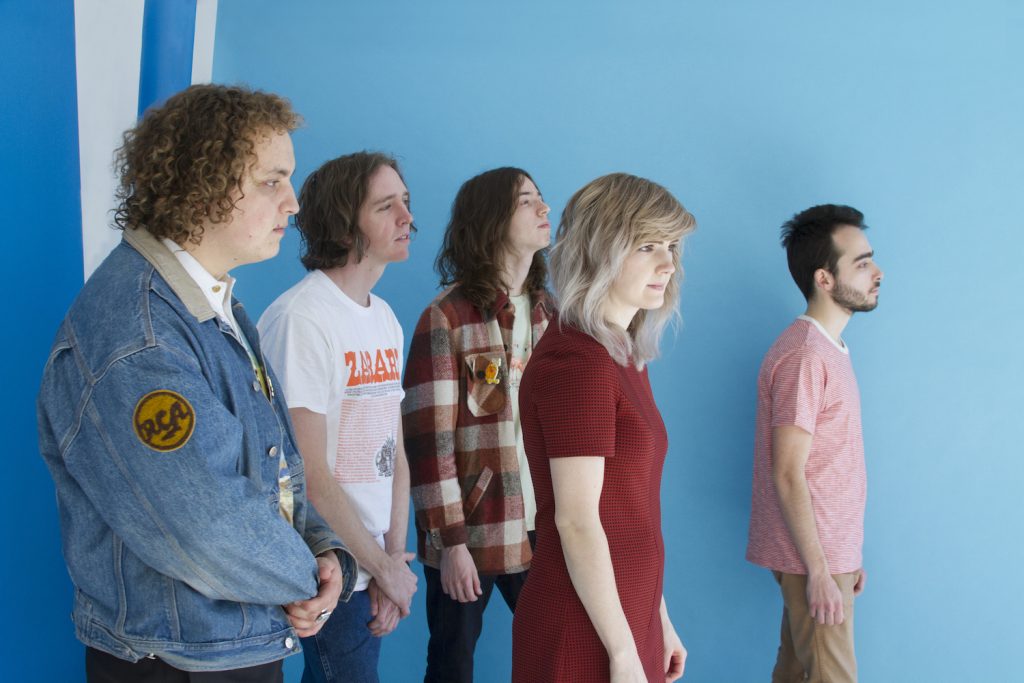 IT FEELS FITTING THAT instead of meeting up in some coffee shop, Helen Van, the founder and songwriter of Big Surr, invites me over for a cookout. Although it’s early March, it feels like an early summer day—the kind of day that beckons you to roll the windows down, crank the stereo, and take the longer drive home. It’s exactly the kind of sunny, maybe-everything-doesn’t-suck-afterall day that the bright, surf-influenced opening riffs of Big Surr’s new album, In Business, instantly transports you to. Even though all of the band members are from landlocked states, these melodies are straight from the West Coast: tropical-sweet along with a surprisingly strong punch.

Van first formed Big Surr in 2010 while she was an undergrad at Belmont University. During those years with the original lineup—which included members that have since moved on to join Diarrhea Planet and Mitski—the band produced an EP titled Miss You Most and a Baked + Bruised seven-inch on Jake and Jamin Orrall’s beloved local label, Infinity Cat. But after two years of playing around town at now-defunct DIY venues like Glenn Danzig’s House and The Other Basement (back when the DIY music scene was just starting to become the subject of glowing write-ups from national publications), Van moved back to her native Ohio for grad school, and then on to San Francisco, just a few hours from her band’s namesake beaches.

Although she continued playing music and writing in her new locales, her years living outside of Music City were vital to her decision to take Big Surr more seriously. “I ended up going to Ohio State, which was where I finally realized that our music was good. Here, everyone thinks they’re great, but half of the people are just stoned all of the time. When I moved away, I realized . . . our music was kind of different. I regretted not trying harder, so eventually I decided to come back and record an album,” she says. “I think it’s been exciting to come back and really want to do it whereas at first it was just for fun. This time it’s more intentional.”

In 2015, she rebuilt a new lineup of talented players who share her unabashed love of sunny pop, including guitarists Josh Halper (Western Medication) and Asher Horton (Fox Fun), bassist Danny Herrmann (No Regrets Coyote), and drummer Cam Sarrett (D. Watusi). They all clicked almost instantly and soon began the recording process for their first full-length album, In Business, at Andrija Tokic’s famed East Nashville recording studio, The Bomb Shelter. “We recorded the whole album live. We did twelve songs in two and a half, three days,” Halper notes.

“We were a first-take band. First take was always good, second take, not so much. Which is unusual,” Van adds. Definitely unusual, but it’s a testament to the serious musicianship behind their fuzzed-out, lo-fi sound, and to how tight-knit Big Surr is in every way.

“Some of the songs I wrote in college, and I wish I had written more back then because I had more free time. One song from grad school is on the album, ‘Taller.’ When I came back to Nashville, I was unemployed for my first few months here, so I had plenty of time to write. I wrote pretty much the rest of the songs, and I sent my bad demos to the band and they helped clean it up a lot,” Van says.

Going around the circle, Galaxie 500, The Jesus and Mary Chain, Beach Fossils, and Camera Obscura are all noted as influences, but Halper is quick to point out some more straightforward pop, notably a few Avril Lavigne-esque moments that jump out on In Business. “I got an electric guitar in seventh grade and immediately learned ‘Complicated’!” Van says with a laugh.

Considering most of the members are natives or have lived in Nashville off and on since the mid-2000s, they have a keen understanding of the city’s music scene as a whole and have experienced some key changes. “A lot of the scene that everybody’s been involved with has been made up of a large group of people growing up together. People are getting older, a lot of things are changing, ” Halper explains. The influx of young musicians over the past five years has also led to a feeling of oversaturation. The rest of the bandmembers agree, explaining that while this creative community is thriving, it’s harder than ever to hear every new rock band and get a decent grasp on what’s going on.

“IF YOU’RE OPENMINDED, IT’LL PAY OFF.”

Attending shows is a much different experience these days: a few years ago, it was common to recognize each and every single face in the room, but it’s now about fifty-fifty. Sarrett jokes that the strangers still seem familiar though, “like bizarro versions of your friends.”

But instead of being bitter about the rapid changes, they’re all refreshingly supportive and optimistic about new music happening around town. “If you’re open-minded, it’ll pay off,” Horton assures me.

In a scene that many have criticized for being male dominated, Van’s creative control and vision as a front woman are welcomed. Although very reserved on the subject of her songwriting (“I just mumble words until something sticks,” she claims), she deserves credit for her down-to-earth writing style. Every track on In Business is incredibly relatable, from the frustrations of modern dating to the blissed-out feeling of new love. Halper and Horton’s bouncy guitar harmonies, Herrmann and Sarrett’s crisp rhythms, and Van’s whistleable hooks give Big Surr a distinctly youthful, hopeful feeling.

In Business is such a well-crafted confection, it could almost make you forget about the extreme social unrest that has characterized 2017 so far—almost. “We haven’t jammed on a new song since then, so it’s yet to be seen what that’s going to look like in a Big Surr context,” says Sarrett.

“I am worried about youth. There’s talk about defunding arts programs and I think it’s really important that it doesn’t happen,” Halper explains.

“Playing music . . . there’s just a better reason to do it now,” Horton adds. 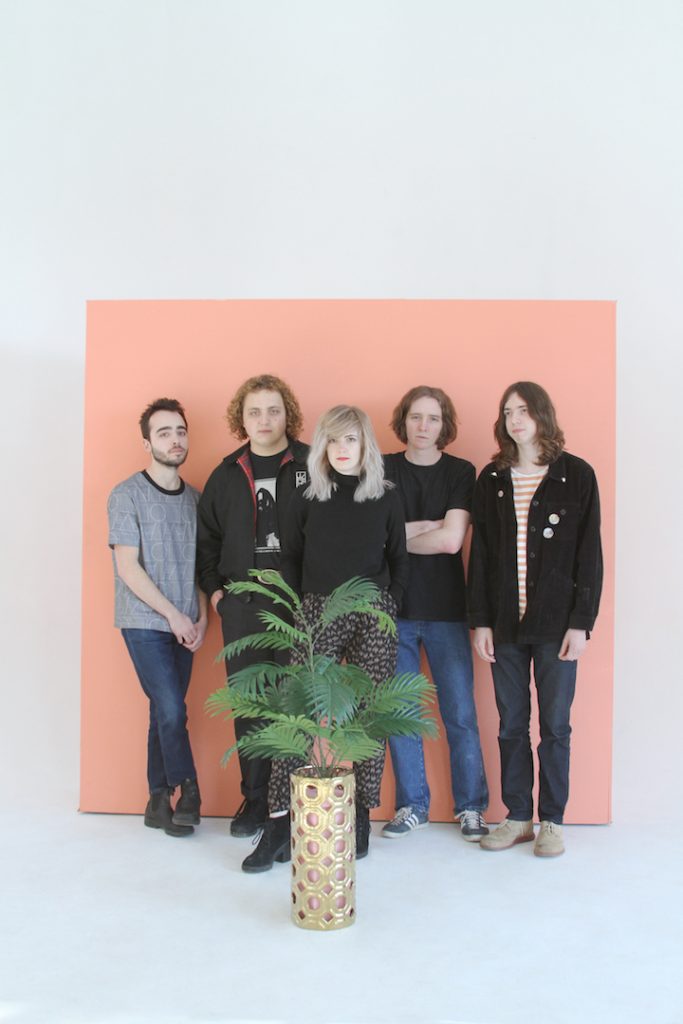 Big Surr’s main creative challenge, like pretty much any post-collegiate band, stems from half its members’ demanding day jobs. It might weigh most heavily on Van, a digital behavior analyst at Vanderbilt Medical Center doing strategic marketing. Translation? She’s got some serious business knowledge and an unapologetic love of advertising. “This is totally the marketer in me, but I just want to license these songs for advertising for brands we like. It would be cool to combine music and my field,” she says. “We’re one of the most businessy bands. I’ve thought about getting into jingle writing.”

As for what’s next, Van admits her job keeps her too busy to commit to a full tour (plus she prefers sleeping in her own bed over floors and knowing when she can take a shower), but there are plenty of Nashville shows and maybe even a few weekend runs on the horizon. “I have a bunch of songs drafted. I’m picturing an EP that we would record later this year if I get enough songs done,” she adds. When I ask about her hopes for this record, she smiles and points to her business training: “I was taught in advertising to set expectations low and overachieve them. I think it’s more fun to do that in life.”

In Business is available to download and stream now.