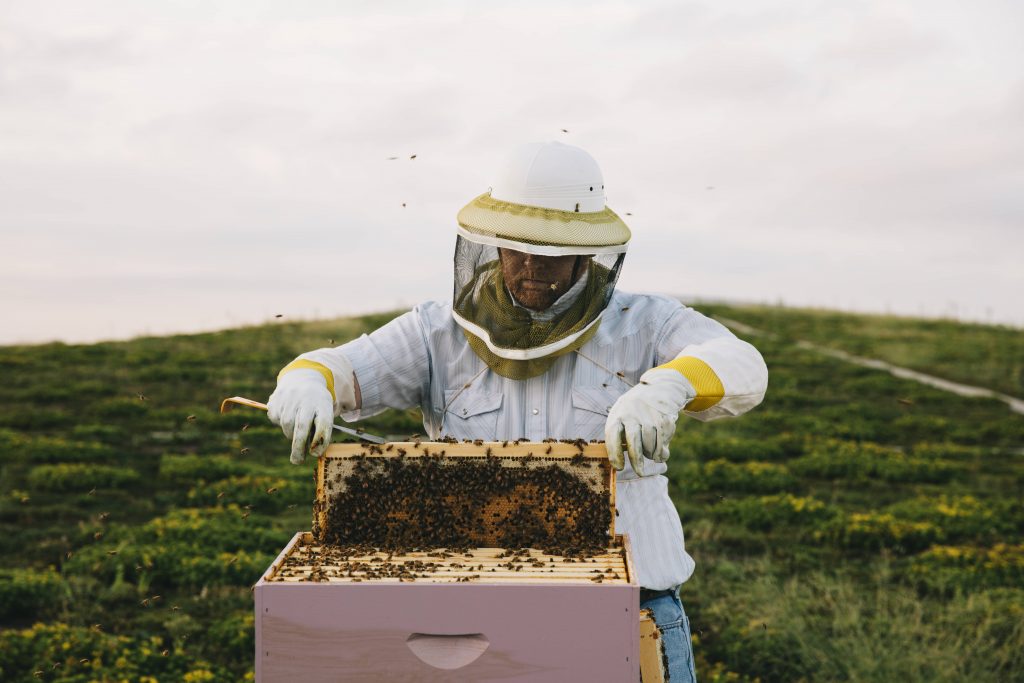 In an effort to beat the heat and catch “the girls” at a time when they aren’t likely to be too aggressive, he’s scheduled our interview for 6:30 a.m., but it’s closer to 7:15 when his booming baritone finally announces his arrival.

“Sorry I’m so late,” Jamie Meredith calls as he hurries down the huge concrete hallway that runs through the back of house at the Music City Center. “We had an incident on the farm this morning.”

The holdup: a fox got into the henhouse on the five-acre farm where he, his wife, and their two kids live out in Neely’s Bend. Luckily, the fox got stuck just out of reach of the chickens, and none were hurt. Still, Jamie had to figure out a way to get the fox out without putting himself or his birds at risk, an effort that took up much of his morning.

It’s an almost comically cliché tale, yet it’s delivered in such a steady and sober fashion, it’s clear that situations of the sort are not too out of the ordinary for Jamie.

Jamie is a stocky forty-one-year-old farmer and family man with freckles and spiky strawberry blonde hair. On top of his day job as director of operations at Plan Left, an East Nashville advertising and marketing firm, he also manages half a dozen honey bee hives in the Nashville area, including four on the roof of the city’s most expensive and arguably most impressive structure, the Music City Center. 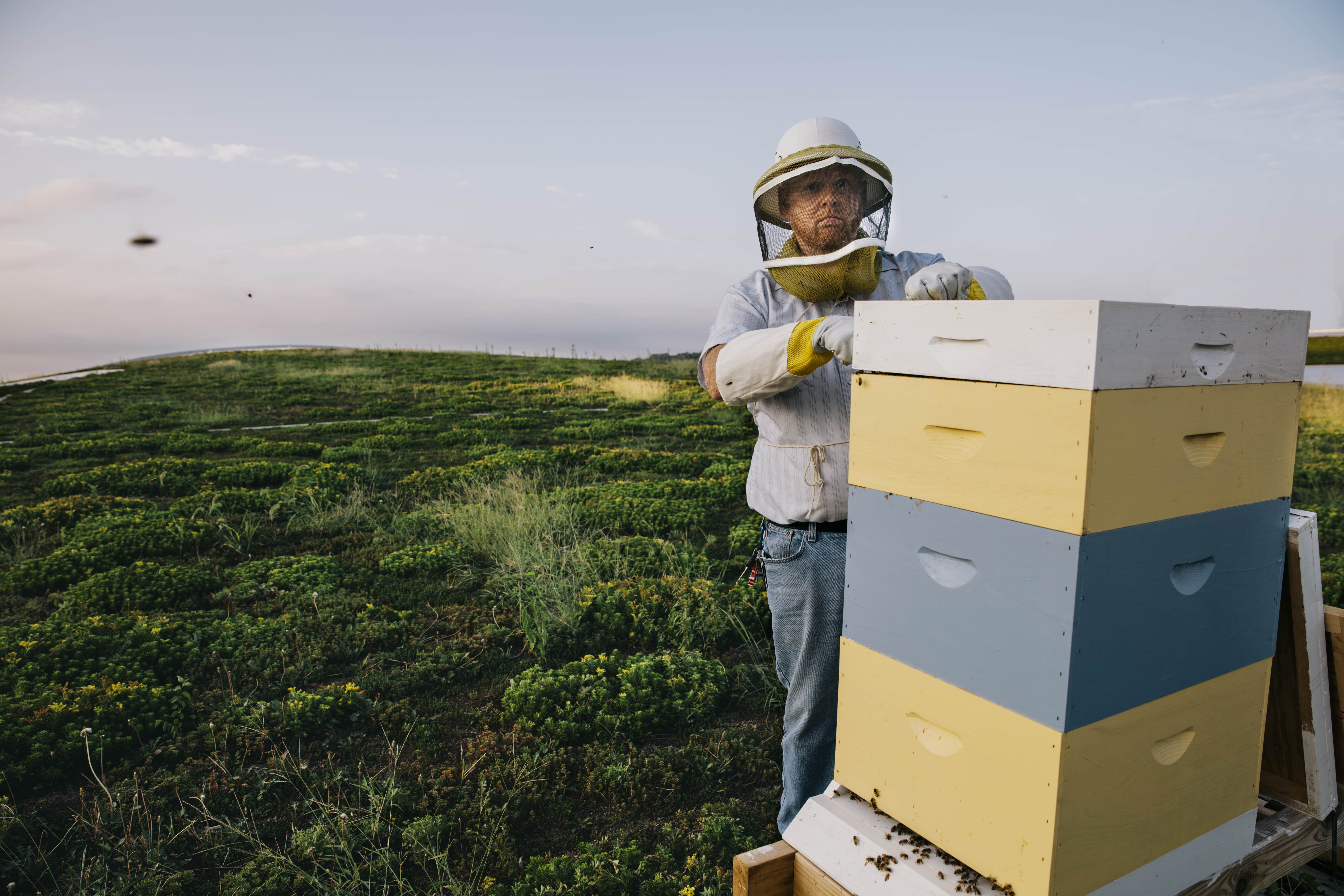 On this particular morning, he’s taking no chances. He pulls on a long-sleeved white shirt, gloves, and a veil, making sure to tuck his shirt so that no shred of skin is exposed. The previous week he was less careful, he tells me, and two bees flew up his shirt and stung him twice on the stomach.

“Now, we’ve had plenty of visitors out here to see the hives, and we’ve never had anyone besides me get stung,” he says, sensing my hesitation at the idea of going out in a short-sleeved shirt next to a guy who’s suited up like an agricultural astronaut. He says if I stand a few feet away from the hive, I should be fine. His assurance is only mildly calming.

“Have you ever seen the inside of a beehive before?” he asks as he opens the door to the outside world. But he never got his answer.

The lushness of the space immediately takes precedence over our conversation. There, about one hundred feet in the air, on top of ballrooms and escalators, surrounded by skyscrapers and cranes, sit four acres of rolling green hills.

The Music City Center is LEED Gold certified, an accreditation that puts it in the second tier of environmentally responsible buildings in North America. The water drainage system recycles the rainwater from the roof to use for irrigation and flushing the toilets, and the building’s green top is covered in sedum, which helps moderate heating and cooling. 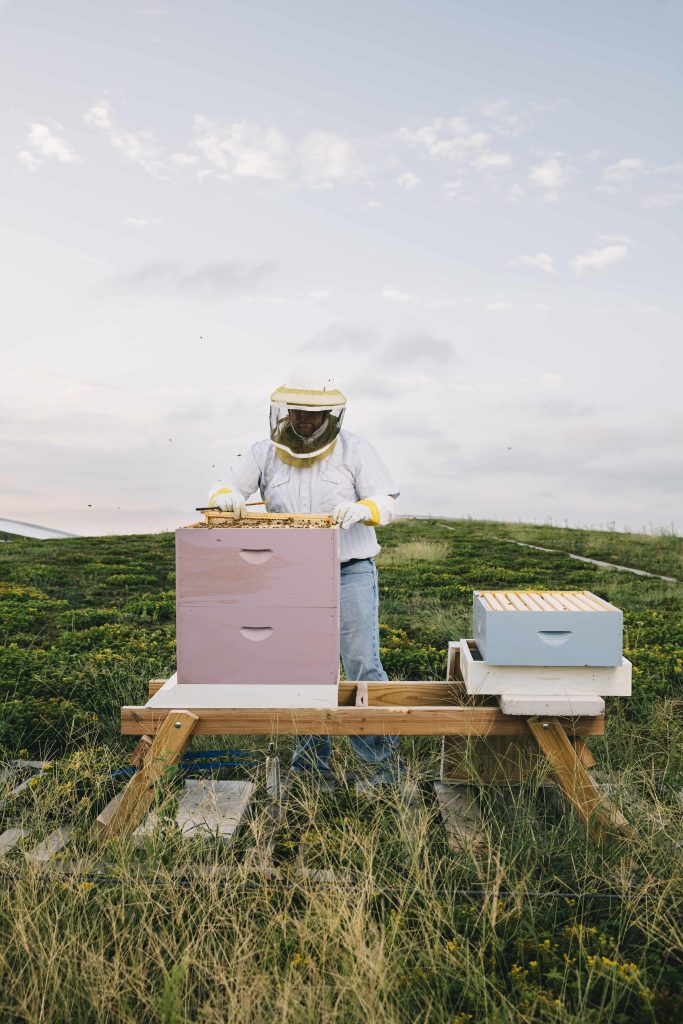 Far off along the northern side of the roof stand four bright boxes that look like stacks of pastel-colored drawers. Inside these structures live more than half a million Italian honey bees, a number which has grown considerably from the one hundred thousand that were placed atop the roof earlier this year.

“Bees don’t see like we do,” Jamie explains, leading the way to the farthest and, he assures me, most docile hive. “They see ultraviolet wavelengths, and pastel colors are best at transmitting those waves. Essentially, these patterns are their addresses.”

Jamie doesn’t bother walking along the narrow concrete path and instead opts to walk beside me, nonchalantly stepping over the sedum. In a way, this space is like his backyard. He’s up here two to four times a week risking some seriously nasty stings to make sure that each of the hives is thriving. And he does it all strictly as a volunteer.

“My love for bees—well, actually that’s not true,” he responds when I ask about his willingness to work without compensation. “I guess what really inspired me was knowing that the Music City Center is really trying to raise visibility on important sustainability efforts and knowing that we could really get the word out there by doing this.”

So what’s the big deal about bees? The alarming and continuing decline of worldwide bee populations has been well documented by the media in recent years, and that’s a sticky situation for more reasons than simply its effect on the availability of honey. According to Jamie and many expert scientists, the survival of the honey bee just might determine your future access to food. 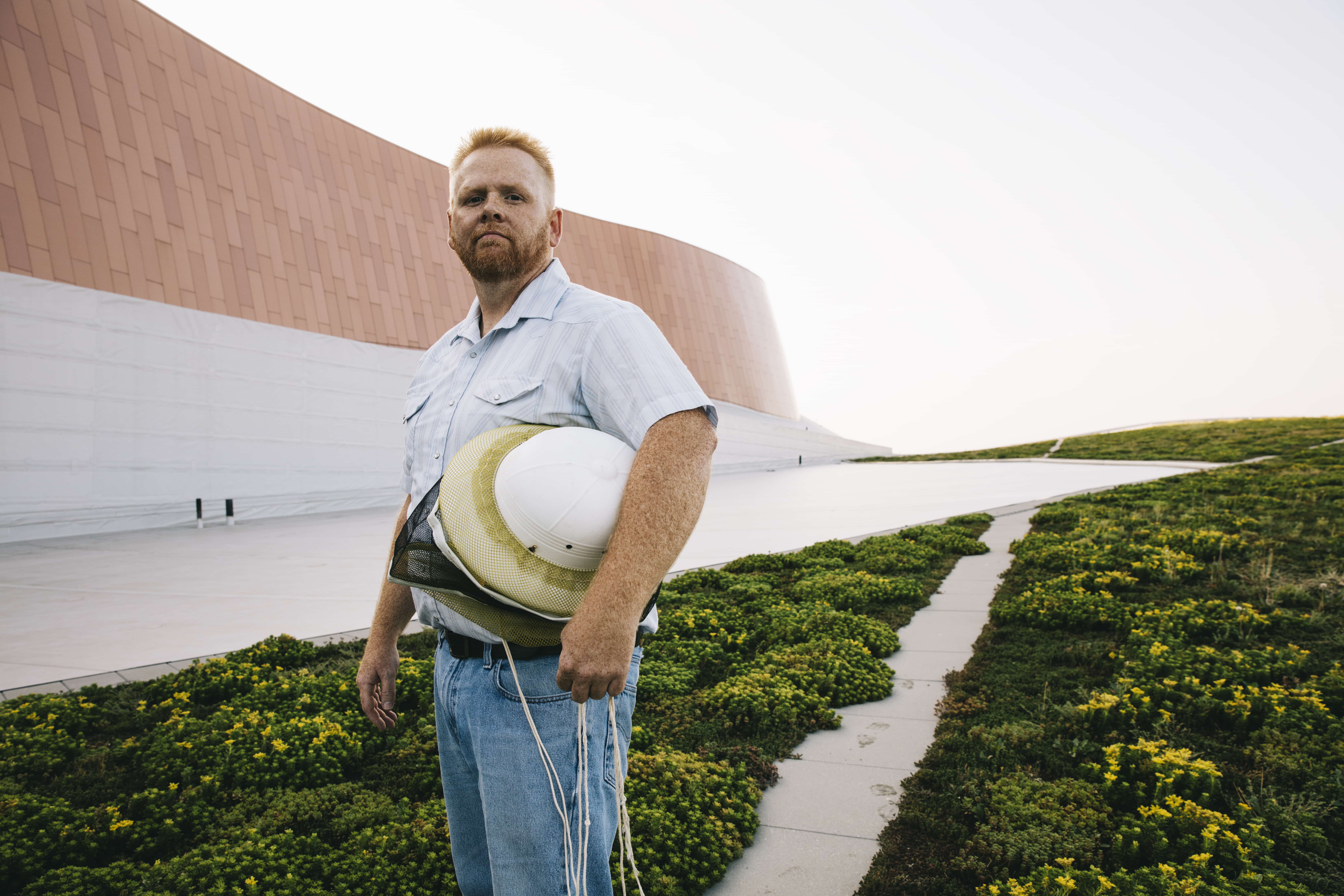 A quick science lesson from a nonscientist: bees are responsible for pollinating the plants that not only produce many of the fruits and vegetables that we consume on a daily basis but also the crops that we feed to our livestock to give us meat. In fact, according to the National Resources Defense Council (NRDC), nearly one third of all the food we eat in the United States comes from plants that are pollinated by bees and other insects.

Shortly after the new millennium, scientists began to notice a rapidly growing number of colony failures. Worker bees were seemingly flying out on routine nectar-gathering trips and mysteriously disappearing, abandoning the queen and the rest of the hive. The name Colony Collapse Disorder was coined in 2006, and various documentaries and articles have increased awareness of the inexplicable phenomenon in recent years. In response, a modern bee movement has taken flight around the globe, with farmers, urban residents, and even city buildings electing to keep their own hives.

The idea of keeping bees at the Music City Center came to President and CEO Charles Starks after he learned of similar hives atop the Vancouver Convention Centre on a recent trip to Canada. He brought the idea back to Nashville, where a new level of environmental consciousness had been steadily building for years. Jamie tells me that growth of green thought in our town is mostly due to a huge influx of transplants who are helping to push the city forward.

“In some ways, Nashville is very progressive,” he says, adding that beekeeping in Nashville is booming. “Sustainability and the local slow foods movement is definitely one of those ways.” 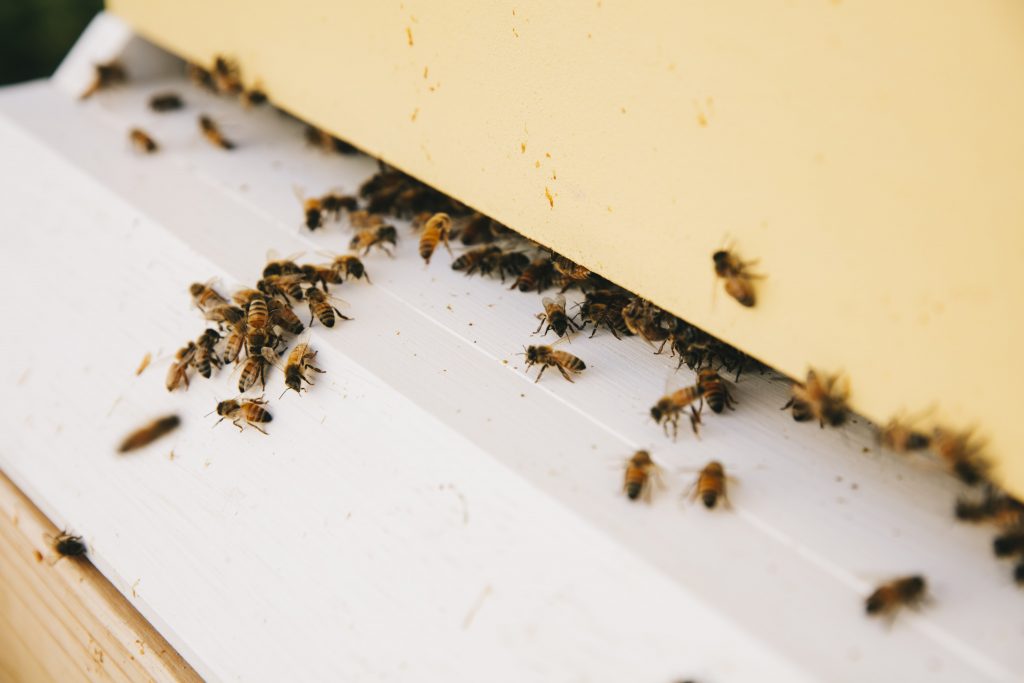 But the bees atop Music City Center, which were supplied by Joel White Apiaries in Brentwood, are good for much more than simply the cultivation of a good cause. Music City Center officials estimate that the four hives will produce about 360 pounds of honey for the center every year, beginning next spring. Around half of that will be jarred and distributed for promotional use. The other half will go straight to the kitchen, where Chef Max Knoepfel and his culinary team will use it to sweeten the food they serve to the center’s guests.

“He really wanted a garden,” Marketing and PR Manager Mary Brette Clippard says of the Swiss chef. “But the sedums weren’t conducive to gardening, so we got bees instead.”

“He was like, ‘If I can’t grow it, then by golly, I’m going to pollinate it,’” Jamie chimes in. “You can tell that his heart is very much in what we are doing.”

But if we are talking hearts, it’s hard to find someone more devoted to the cause than Jamie himself.

Originally from Wichita, Kansas, Jamie already had a deep love for nature and animals when a friend’s father approached him about taking a few of his hives four years ago. He says he was pretty freaked out when he first started, but he soon realized bees weren’t that different from other animals, including humans.

“They are in many ways the greatest example of what we as humans strive to become,” he says. “They express an ideal that we all strive for in our day-to-day lives, working, coexisting, and protecting their freedom to do so.” 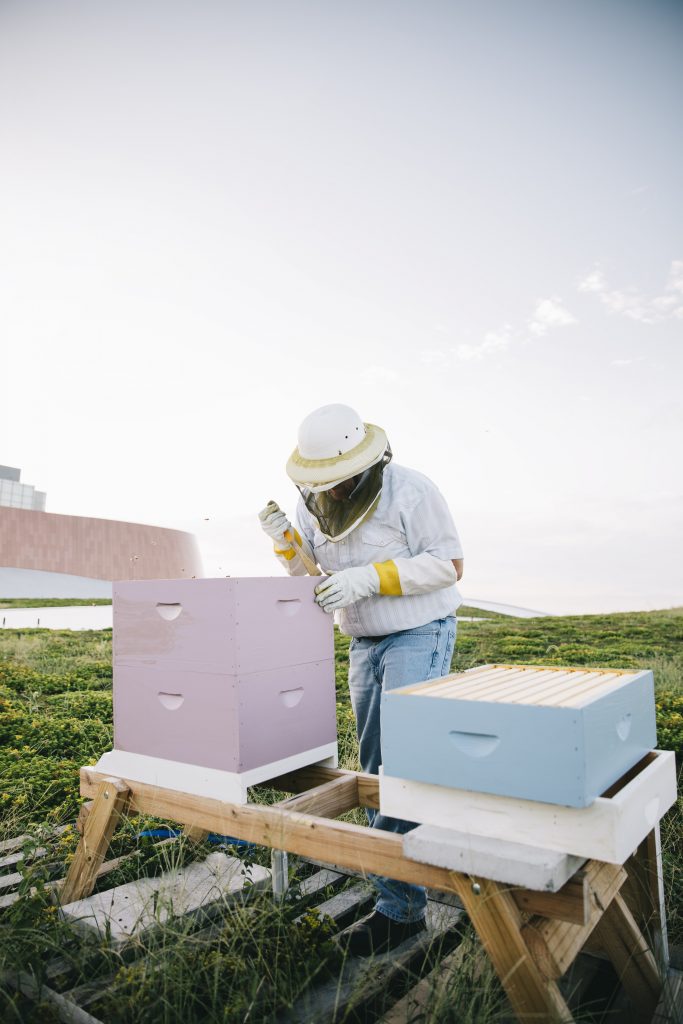 Warning: a quick Google search into the complexity of bee hives might result in half an hour of intensely reading bee trivia you never thought you’d find interesting. As Jamie has discovered through his interactions with the insects, they live in incredibly efficient societies, with each bee essentially devoted to the good of the hive instead of their own survival. This extreme utilitarianism is perfectly exemplified by the fact that the female worker bees will literally work themselves to death, flying around collecting nectar to bring back to the hive until their wings fall off and they starve to death.

“You hear people talk about the God Particle. Well, bees, to me, are the God insect,” Jamie says. “They embody all that we should be.”

And it’s true that bees are extremely devout and self-sacrificing, but strict devotion to the health and social order of the hive also requires some less-than-altruistic activity. For example, when rival queens are present in the hive, bees will resort to stinging these competitors to death or even drowning them in honey.

Still, the fact remains that honey bees can be ruthless when the safety of their social order is threatened. Though they rarely sting when they are out gathering nectar—the time when it’s most common for the average person to encounter them—they are much more protective when they perceive a threat to the hive.

“They are like everything else in nature: they have a rhythm and a cadence,” Jamie says with an experienced understanding that is overlooked by so many who would rather see bees as pests than actually try to understand their complexity and their important link to our own survival. “If you approach them on their terms, you can coexist with them in harmony.” 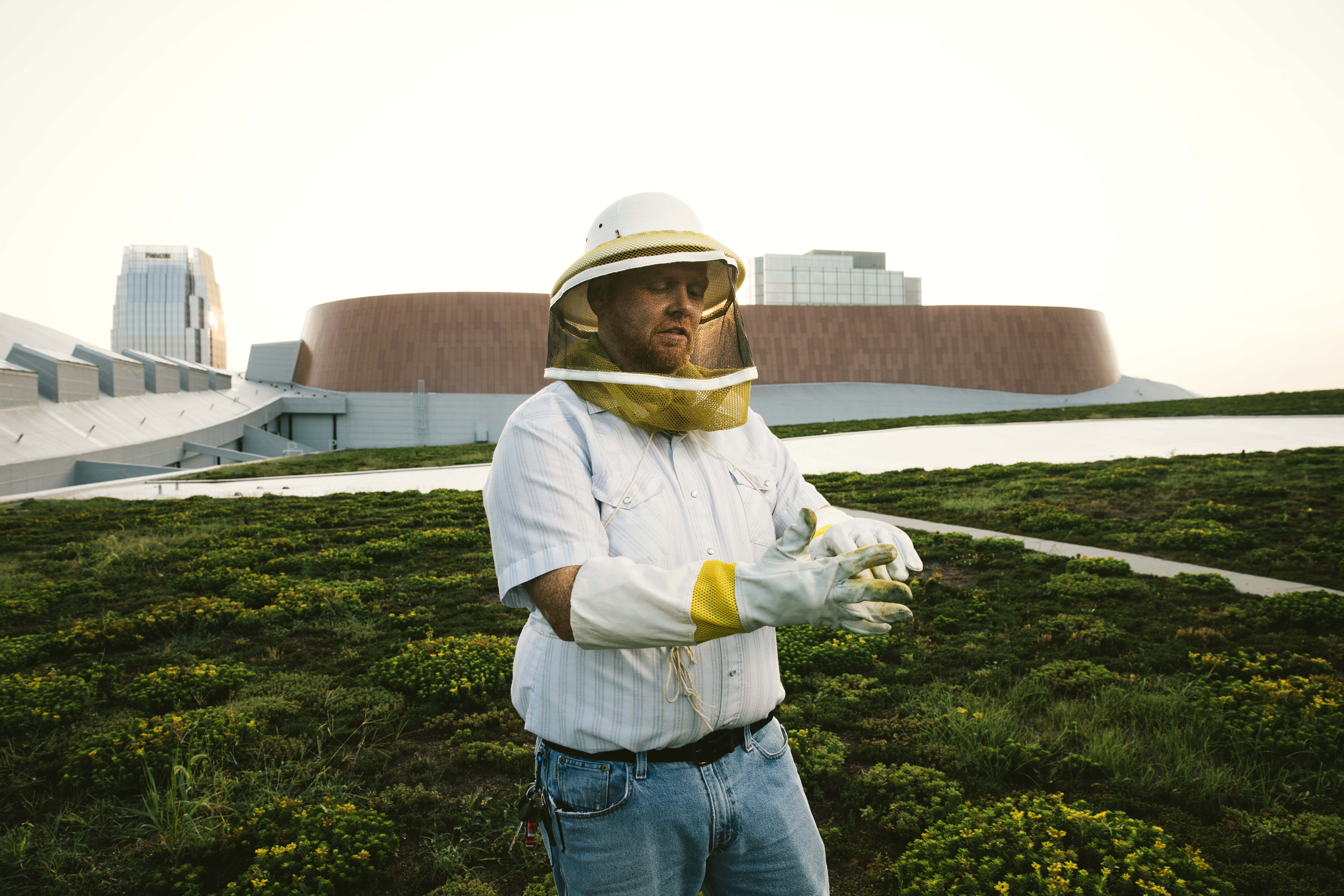 But that’s just the problem, isn’t it? Our individualistic, profit-driven society has rendered much of the human population unwilling to approach other lifeforms on this planet on any terms other than their own personal ones. As big-business agriculture continues to use pesticides and herbicides in mass quantities on crops; as our governments drag their feet to put stricter limits on harmful emissions; and as everyday residents continue to spray poisons to kill bees, wasps, and other natural pollinators, there seems to be a disconnect. There’s an utter lack of willingness by human beings to address our dependence on nature.

“If we do continue to see the decline in natural bee populations, and we continue to see farmers having trouble pollinating their crops and food prices start doubling, tripling, and eventually quadrupling, then I think we’ll see the potential for people to really have an impact,” Jamie says hopefully. “When it becomes a necessity. Right now, it’s just an afterthought.”

It’s a more positive outlook than many scientists and environmentally conscious people will grant of their own kind. They believe by the time that realization happens, it may be too late. But then again, Jamie is an eternal optimist. He tells me that even if bee populations continue to decline, we may see that nature creates another method of pollinating, citing a recent rise in wasp populations as a possible example. Wasps, though capable, are not as efficient at transferring pollen between plants as the much fuzzier honey bee. They are also more aggressive. But Jamie doesn’t point that out. He’s determined to stay positive.

Perhaps I caught him on a good day. Perhaps it’s just his nature. Or perhaps his continued optimism is a direct result of the fulfillment and satisfaction he gets from working so hard to keep up the health of his own colony, the human hive.

“I am calmed by them,” he says of the bees. “I find a lot of peace in knowing that I am helping care for something that is vital to our existence on this great planet.