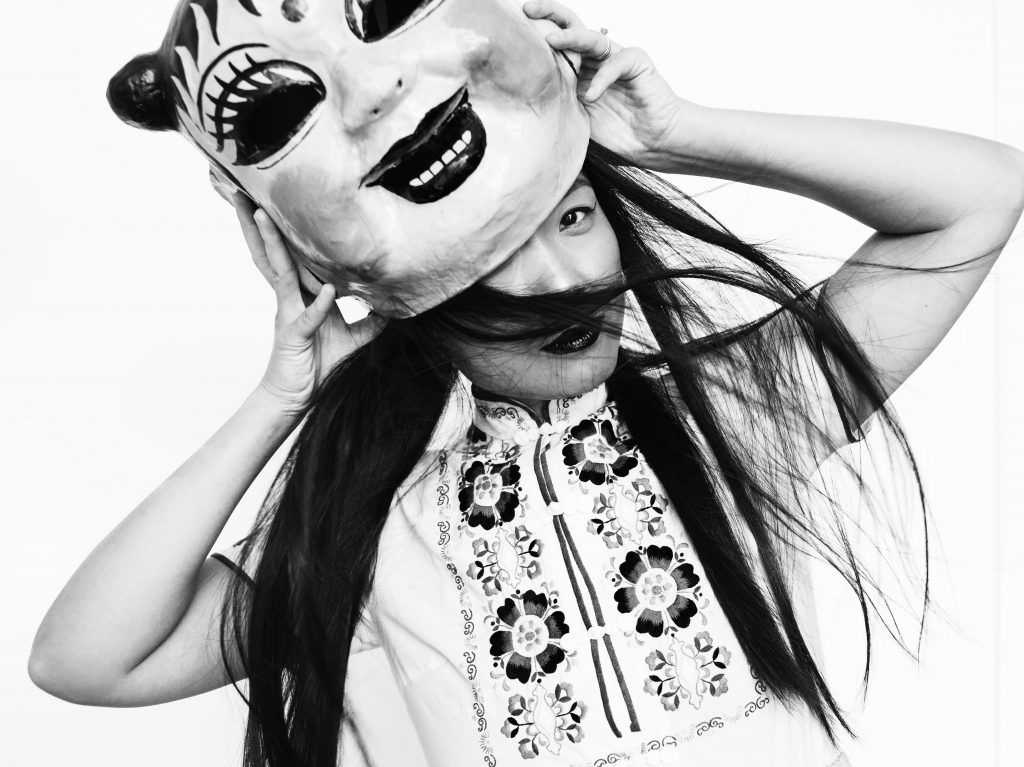 Somewhere on a social media feed in Nashville, right this second, someone is debating the authenticity of new country and venerating an artist of fifty years ago. Somewhere else, a dad is grinning and bearing his daughter’s Spotify playlist, thinking, That’s not real music. Both are taking the short view when it comes to music and its place in human history. I’m guilty of playing along. At one point I’m pretty sure Kanye had me convinced he had invented beats and apocalyptic sweat pants. I’m still mostly convinced that Prince invented sex.

All that aside, in the context of culture, music is so much bigger than the past sixty years or so of contemporary popular music in all its glitz and glory. In the midst of my own ties to musical modernity, I sit on a sun porch, visiting with master composer Wu Fei, who plays the guzheng, a Chinese stringed instrument that dates back roughly twenty-five hundred years. The instrument looks like a zither or a wooden harp laid flat, and it’s about the size of a coffee table. A recent Nashville transplant, Wu is both a futuristic visionary and an expert on ancient Chinese folk music. If that’s not enough, she also plays in an experimental Chinese-Appalachian folk duo with banjo extraordinaire Abigail Washburn. If that’s really, really not enough, she also collaborates with Washburn and Kai Welch on a Chinese operatic/’80s electronica/Uyghur desert folk project called The Wu Force. Her path from Beijing to Nashville is nothing short of an epic adventure of human awakening and expression. It’s almost as if you need a musical time-traveling machine to get a grip on her understanding of music.

My first experience of Wu was watching her on YouTube in an entry called “Serendipity Improv” (posted on May 19, 2016) recorded in Nashville. The entry description of the video reads: “My secret wish came true today—I had the privilege [of] jamming with a train. It’s the most metal piece I’ve ever collaborated with. I’m still high from this encounter . . .” 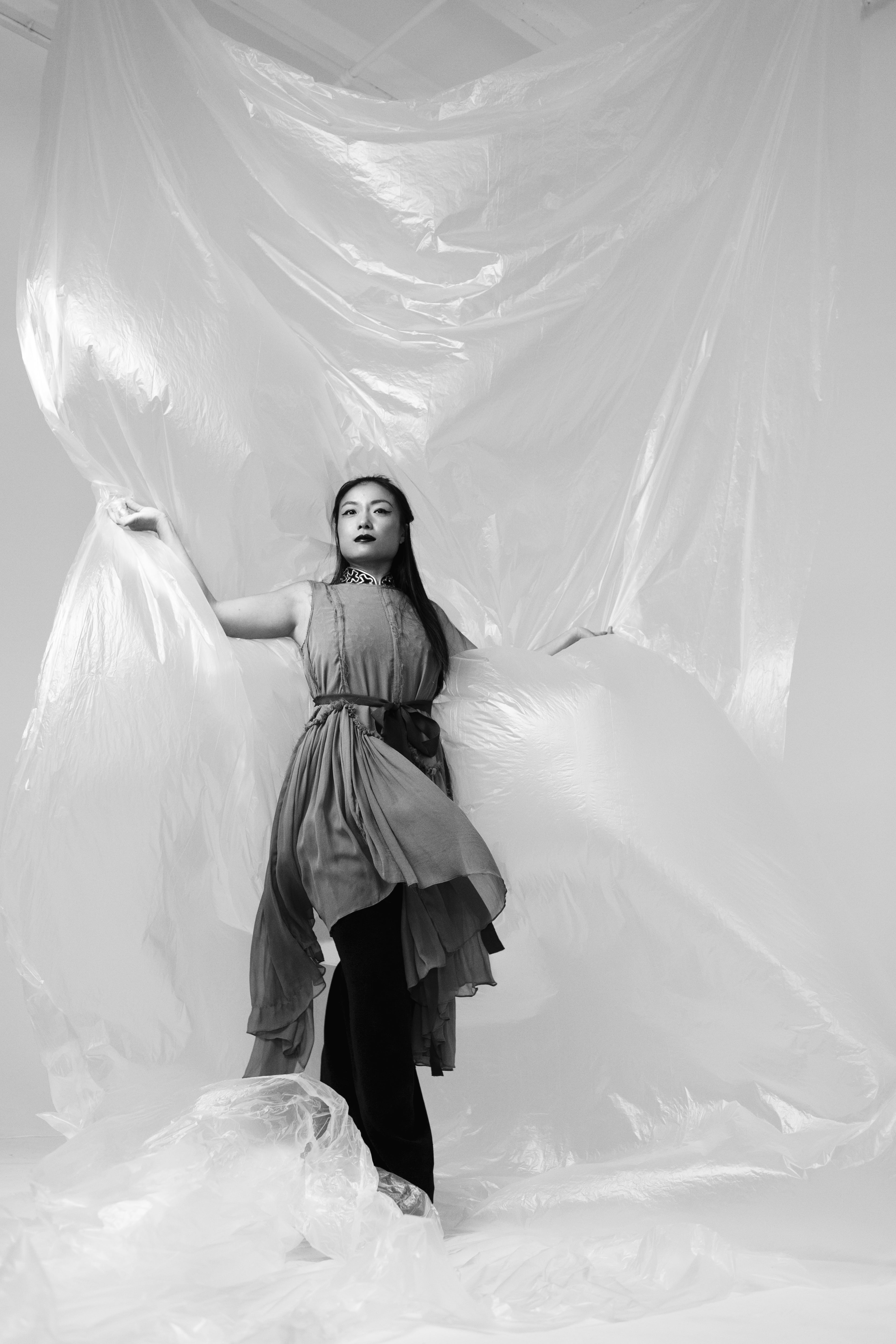 So, I push play. There she sits with the guzheng on a stand on gray gravel, fifteen feet from a railroad track. The trees, drunk on summer rain, sway and set a deep green background. After a one-second intro to her improvisation, she begins with a trill reminiscent of a mandolin. Nine seconds into the video, a train blows its horn in the background. Ten seconds later, over the sound of her picking, the camera rattles, the train passes, and her hair and dress begin whipping around. She moves her hands to the low strings and the train brings all the chaos and power right next to her, forcing every molecule of air out of its way. She can’t help but laugh beneath the rumble. The sound of her instrument barely registers. Playing seems futile, as the wheels occupy every frequency on the spectrum, and there is no place for sound to fit except for underneath the decibels of the train. But you can still see her hands as she’s playing along to the rhythm of a million tons of freight shaking the earth. It’s like trying to make music with a tornado. Two minutes and seventeen seconds into the video, the train is gone, leaving all the air, space, and frequency for the guzheng to resonate within. It reminds me of the shock of the sound before and after a gun fires, piercing and leaving silence in the middle of nowhere. And up from the silence comes the sound of Wu plucking—it doesn’t sound particularly Chinese or folky. It sounds like an accompaniment to the birds and the trees and the new quietness. In between the tweets and the breeze, there’s a softness in the expression that’s intended to harmonize with nature.

Wu is about to start recording her third solo album this fall, due out in spring/summer 2017. In the meantime, she’s been building a home with her husband in West Nashville and doing impromptu performances (like the train performance) by herself and posting them on YouTube. Maybe it’s that the guzheng and sound of the music are foreign to me, or maybe it’s the idea of playing an instrument in what feels like an unlikely environment, but the performances themselves seem avant-garde at the outset. Wu explains that some of the motivation was born out of necessity: “At the beginning . . . I just wanted to share my music, and since I became a mother it’s really impossible to practice at home. You know babies are sleeping and this and that. So, I’m like, ‘Hey . . . The instrument is beautiful. I want to share that to this part of the world.’ The type of improvisation that I play, it doesn’t sound like anything that I’ve heard, and [it’s] just a combination of all my backgrounds. Life in China. Life in America . . . I just felt like the true improvisation should be a true reaction to something that you don’t have to make yourself.”

The “life in China and America” of which she speaks is an unlikely global intersection of circumstance and education that began in Beijing. Some unique concoction of family and culture (along with the bustle and buzz of one of the world’s most populous cities) combined in just the right way to bear the young, prodigious Wu Fei: “My music training started when I was actually a kid, I think about five or sixish, and I started playing the guzheng, as well as piano, then in choir and everything. By the time I was fourteen, my music teachers suggested that I should try to get into the conservatory.” 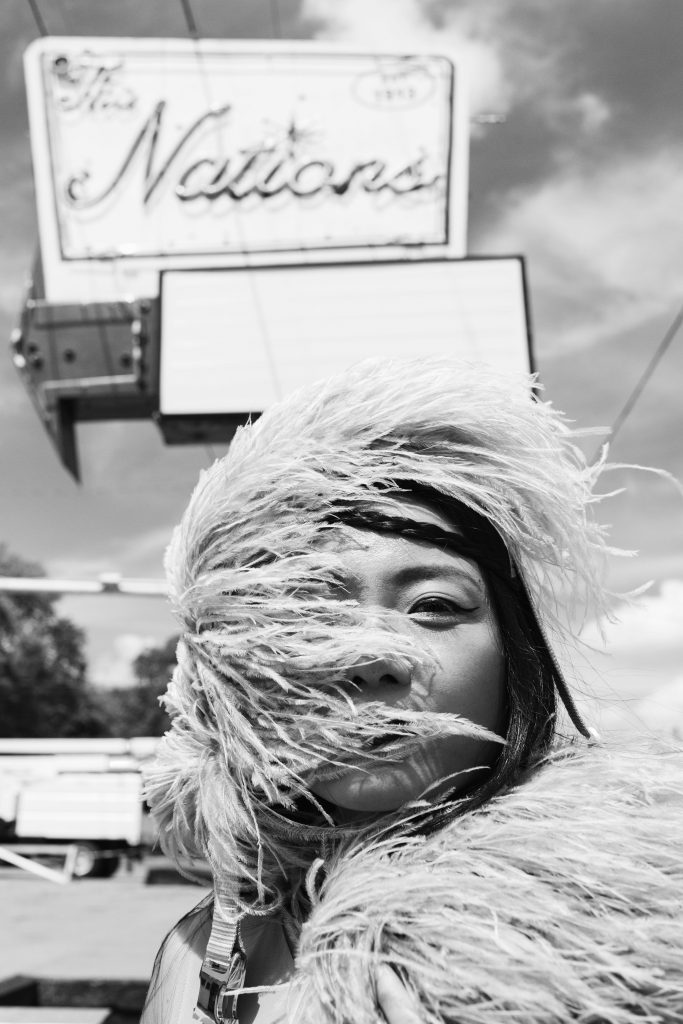 She would be one of thirteen teens selected in all of China to begin studying composition at the China Conservatory of Music that year. But her education there served mostly as a rigidly intensive formal study on Western musical theory: “I was prohibited to play whatever [I wanted] in the conservatory, because that’s considered messing around. That’s not allowed. In the conservatories in China, there’s no such thing [as] improvisation. I didn’t know anything about improvisation until I came to the States. Nothing! Not even the word.”

After conservatory she continued her study of composition at the University of North Texas, another renowned program. At UNT, her arc and intention were similar to her Chinese education, as she explains, “I had no clue. I just thought I would get as high [of a musical degree] as I can. Then I’d get a professor job, you know, music theory or composition writing for a string quartet.” At the advice of the famous composer and pianist Frederic Rzewski, she decided to continue her education at Mills College. She stumbled into something she didn’t expect when she began studying under improvisational composer Fred Frith.

From what I hear, even being inside the world of experimental and formal musical training feels a bit esoteric and exclusive. Being an everyman, I need pop cultural references to ground me. It turns out Frith has made his living as a professor and as a collaborator in experimental music with artists such as Brian Eno and Mike Patton. This helps, while also giving new understanding to the sonic adventure that is Faith No More (Patton’s experimental band that gained prominence in the early ’90s). So, a talented and fairly sheltered Chinese composer found herself in a San Francisco college she describes as “a nest for people who want to break boundaries.”

“Basically the first lesson, he [Frith] asked me to bring most of my recordings. He wanted to hear my music. That’s mostly my ensemble work that I wrote and played him. He said, ‘I hear a lot of craft, but I don’t hear Wu.’ That was like a hammer to my forehead, and after that one lesson [I didn’t] go to school for a week . . . just to think. I [had] spent twenty-some years devoting my life to becoming a composer. And like, ‘What have I done? What does this mean? Am I wasting my life?’ [Up until then I did] what my professors had planned for me. Slowly, gradually, I just started playing with so-called jazz, rock, world music, Indian musicians, African musicians, electronic musicians, folk musicians.” 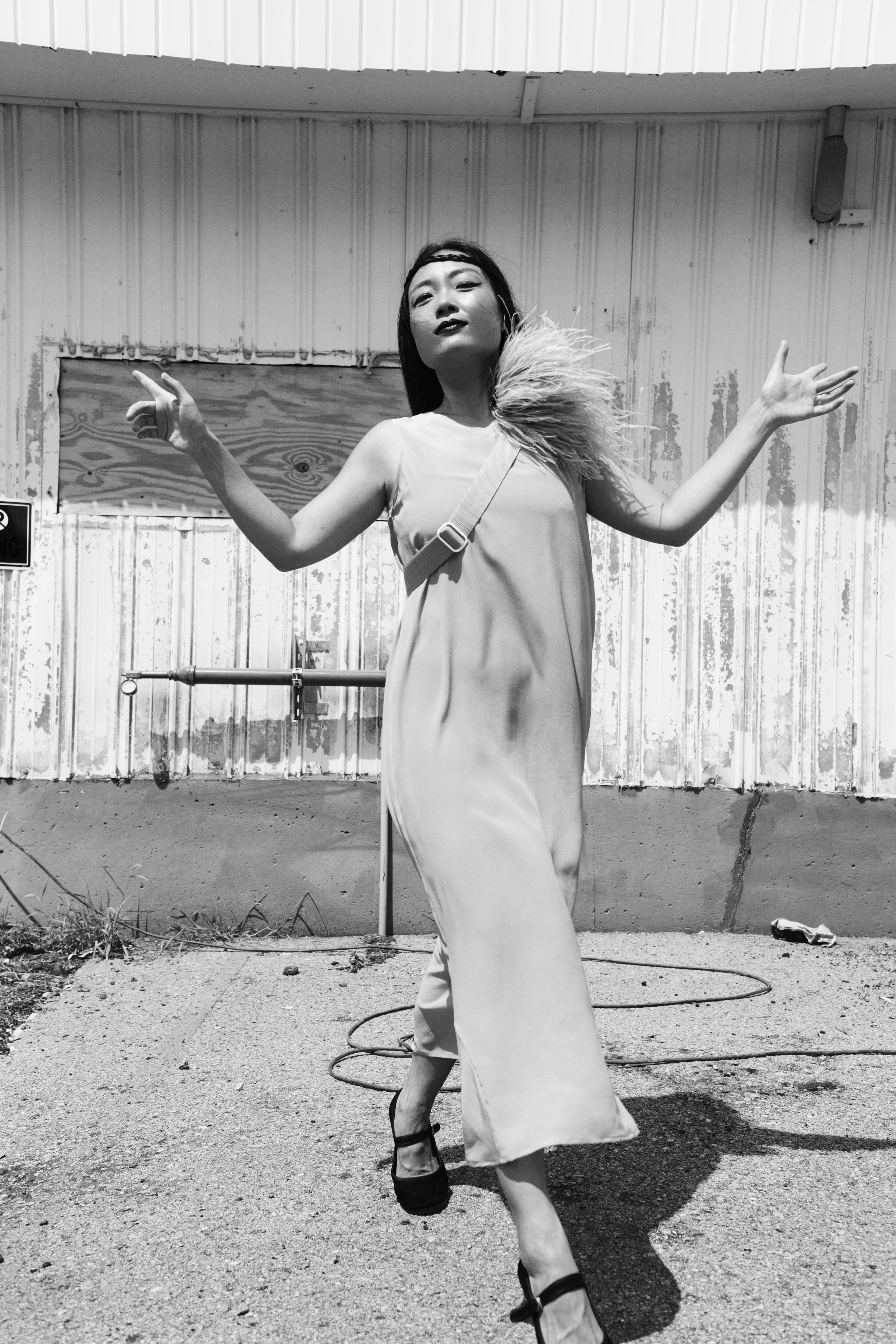 After obtaining a master’s degree and the newfound freedom of improvisation from Mills, Wu began her own artistic career, releasing recordings and exploring New York’s experimental scene. She eventually moved back to Beijing, where she began studying ancient Chinese folk music and opera, taking private lessons, and learning ancient poetry. Her knowledge and recognition of Chinese roots music is so developed that oftentimes she can pinpoint the origins of a song by its language and colloquial style. It’s this kind of creative hunger and historical curiosity that makes Wu’s brand of experimental music relatable, and it’s led her to her primary collaborator, Abigail Washburn, the clawhammer banjo-playing extraordinaire.

The two have developed a sibling-like connection over the past decade, which was a big part of Wu’s relocation to Nashville. Wu says Music City also enticed her because it is “a city of pickers,” full of people with “heartfelt sincerity that goes beyond customized responses.” What started as Wu lending her talents to Washburn’s record turned into a relationship built on their musical and cultural curiosities and respect.

Before ever picking up a banjo, Washburn moved to China on her love of Mandarin and Chinese culture, chasing a dream of becoming an international lawyer. When someone suggested she needed to become more versed in American culture to help with her career, she moved back to America and began learning clawhammer banjo. Conversely, Wu began learning American Folk music at a young age (“Oh! Susanna” and John Denver are hugely popular in China—who knew?!). She continued learning about folk music when she moved to the states, following the roots music of Doc Watson, Earl Scruggs, Elizabeth Cotten, and Ricky Skaggs, among others. Wu and Washburn seem to skip between cultures musically and intellectually, the two being somewhat opposite sides of a cultural mirror in their education and love for each other’s roots music. This global interplay is a part of their show both as a duo and as a part of their other project, The Wu Force. 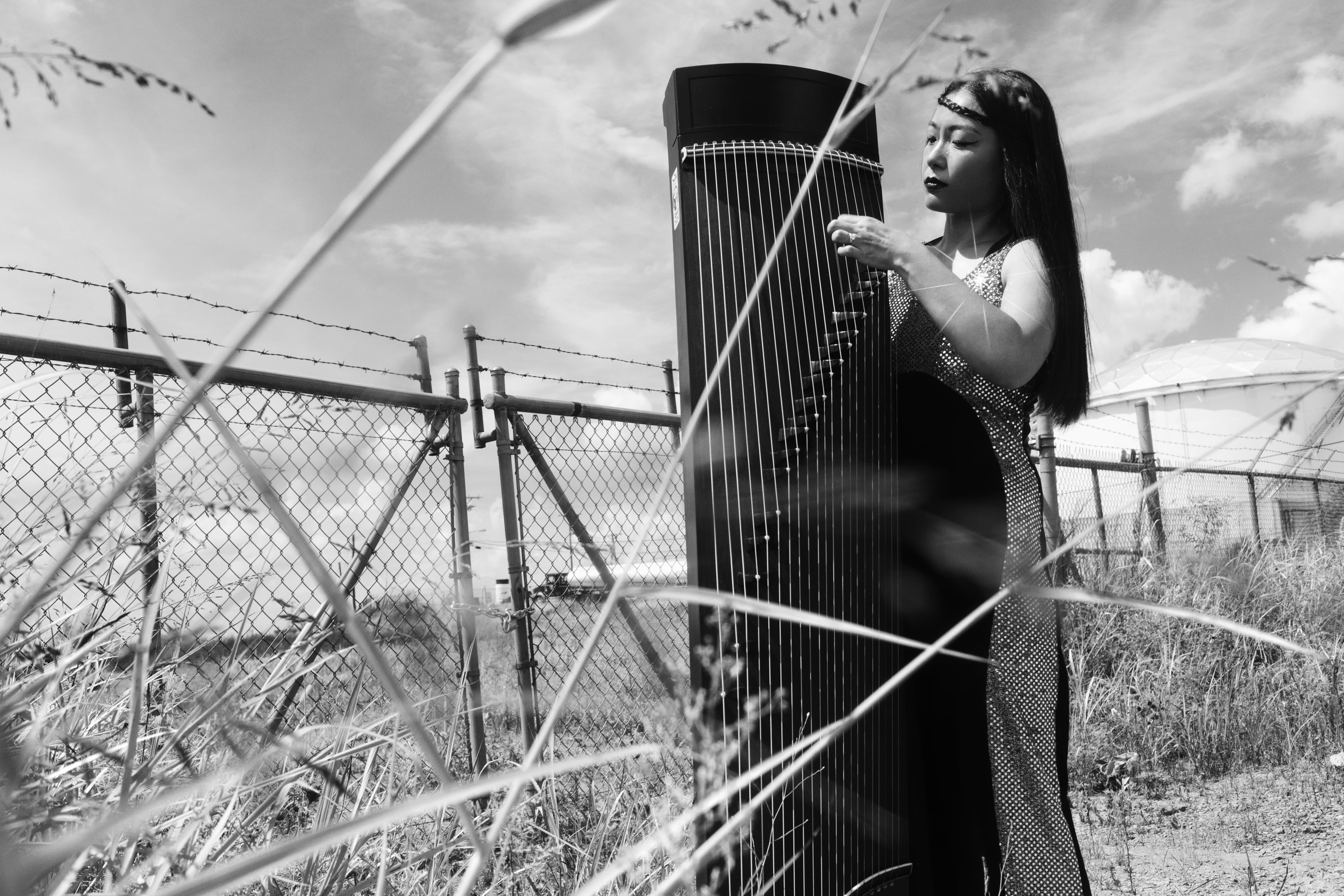 Before a Wu Force TEDxUNC performance, Washburn introduced the band with a mission statement: “We want to tell you that we truly believe in the power of musical and artistic collaboration to lead the way to a much more beautiful global future.” She continued with a description of their song “Piao,” which as Washburn explained, “means ‘floating’ and the words are . . . ‘This morning I woke up / I had not a single plan / not a single care / not a single ambition / I just floated.’” What follows is a pleasant ditty, sung in Mandarin and set to Hawaiian-style lilting that’s as dreamy as a Pixar intro.

Now far from the rules of the conservatory, Wu’s artistry has traversed the world and become the kind that takes the long view of music and culture. It is not embedded in the times like a Prince record (as far-out and indispensable as Prince’s “Kiss” might be). Hers is the kind of music that gets lost in ancient cave paintings, the kind of music that uses instruments played thousands of years ago to express solace, respect, sadness, and vitriol. Wu’s music doesn’t see the contemporary world as the starting point for music. It sees the history of song and nature as the beginning, which in a way is both foreign and timeless in respect to contemporary popular music. When I ask her about her musical ambition, her answer is as basic as it is indicative of her odyssey: “If I can open up one child’s world that could change his or her life, that would be my best achievement, I think. That could potentially bring out the best capacity of this person. I think that’s the best that I have to [offer] humans. Just spread love.”

For more on Wu Fei, go to wufeimusic.com