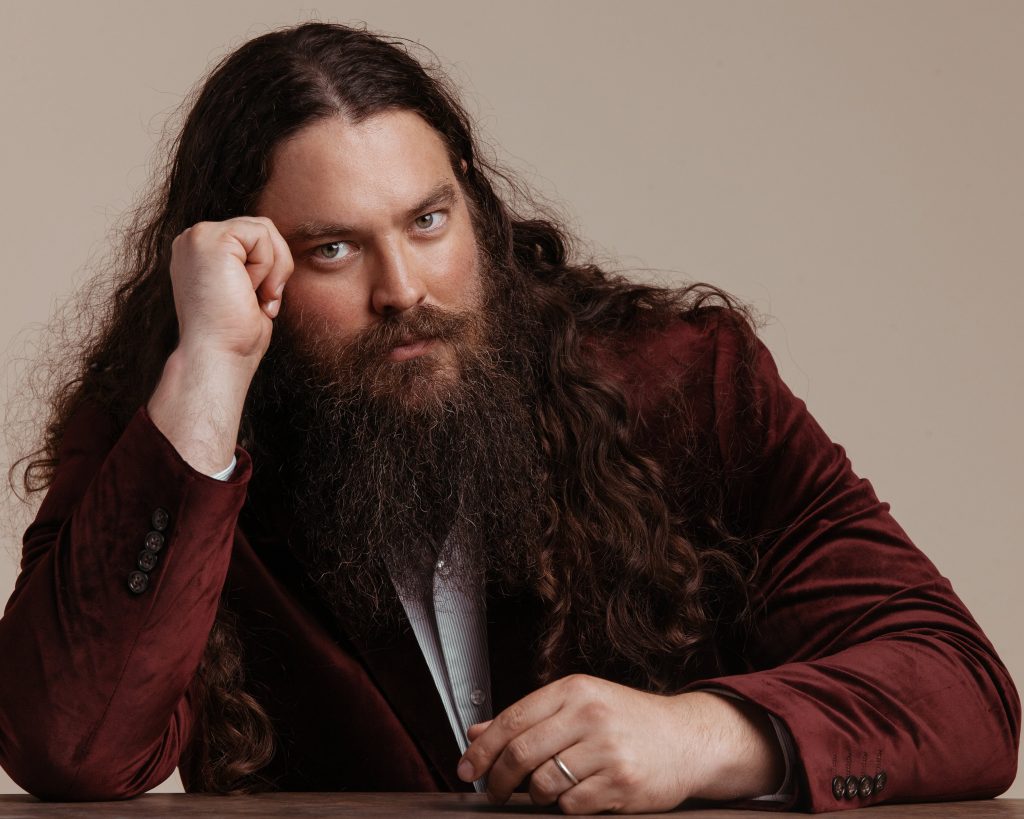 I CRAWL THE STEPS TO AN UPSTAIRS APARTMENT AROUND 4 p.m. and immediately find myself sitting in some kind of uncanny cultural stew—maybe even another dimension. In front of me: ’80s ninja and C-level horror videos, a music stand, and a Flying V guitar. One floor down: a room packed to the gills, pawn shop style, with analog synthesizers, recording gear, and the canon of Western philosophy packed tight across the mantel. To my immediate right: more books on theology, religion, and existentialism than any reasonable home should contain. Behind me: a couple boxes of professional wrestling T-shirts bearing the name and face of “Jocephus.” Joseph the man, burly and soft-spoken, relaxes across from me in the crook of a sectional, easy as could be. I keep asking questions, trying to see where the professional wrestler ends and the theologian/musician/family man/mythologist begins.

It’s tempting to start by sharing loads of newly learned insider pro wrestling knowledge—the ins and outs of “jobbers” and “heels” and “DDTs” and so on. Something about a little peek behind the professional wrestling curtain feels like a carny or masonic level of information privilege. Still, there’s something more interesting and rounded about Jocephus. A peculiar curiosity arrived early in his life, well before the dropkicks and bruises.

After a conversion to Christianity, the young Joseph Hudson followed a calling, leading him on various missions to the Dominican Republic and Haiti. After graduating from Donelson Christian Academy, the plan was to study religion and continue his missionary work. As fate or chaos would have it, his college education led him to a spiritual crisis. “[It’s] that comingof-age type thing when you’re between eighteen and twenty-one—that was when I became 50 percent of a person,” Joseph explains. “It’s kind of like, you go to college and learn the book of Isaiah had three authors, and you’re like, ‘Really?! I never knew that. That’s not what they taught me in Sunday school. The Red Sea isn’t actually mentioned in the Old Testament, it’s really the Sea of Reeds?! Oh, I never heard that either!’ There’s the theological skepticism that enters in through what you’re learning in Old Testament Survey 101 . . . you see how the Bible is put together. You think you’re going to go back [home] and be a missionary . . . and then all the questions come again, and you plunge and plunge and plunge.” 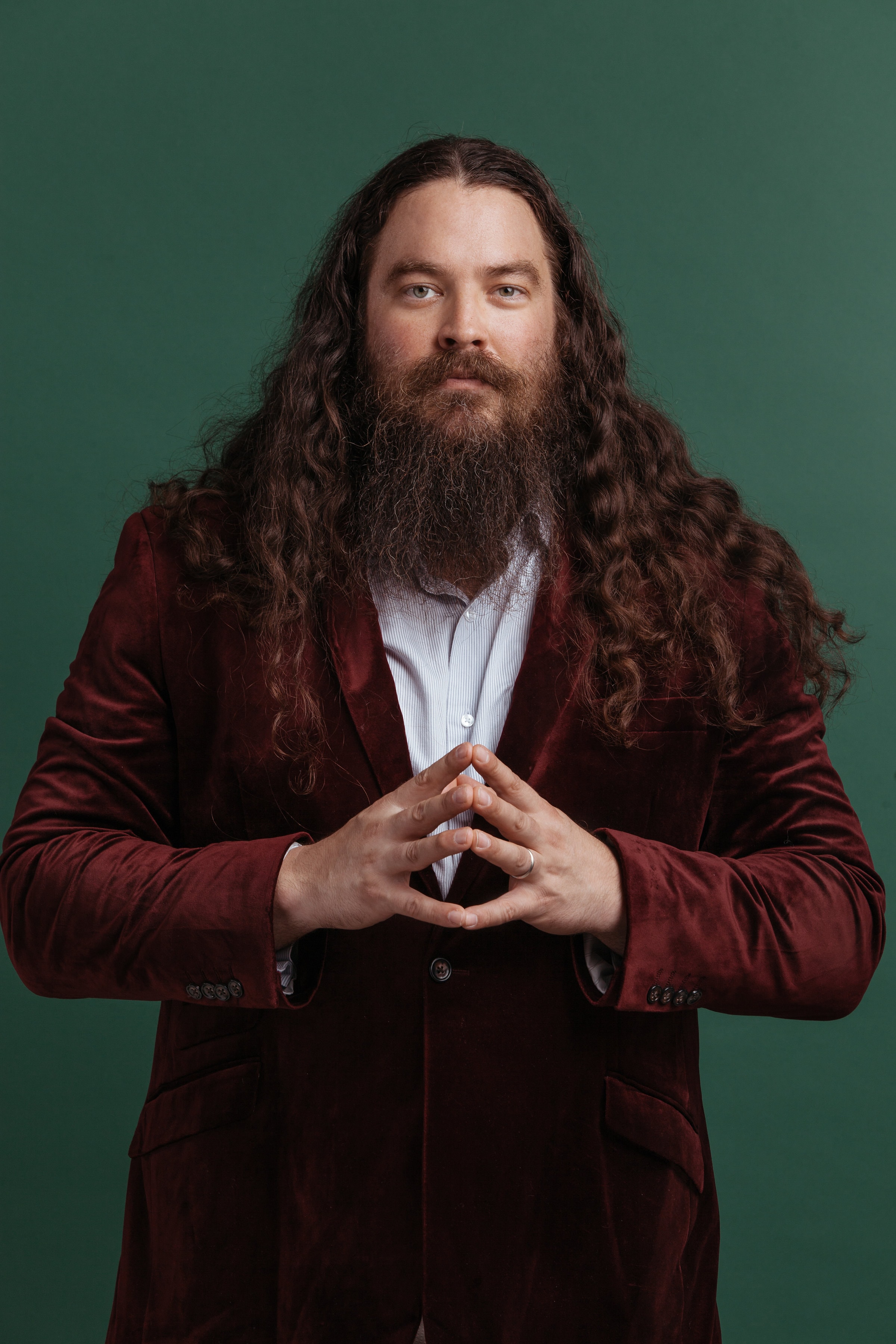 Joseph is talking about what Sartre calls “anguish”—the reality that every decision (spiritual or otherwise) is a radically individual endeavor. Kierkegaard refers to this as “the anguish of Abraham” in reference to the biblical story in which God calls on Abraham to sacrifice his son. Anguish is the feeling of the responsibility that we all have to sort out every choice for ourselves. Even for the faithful, asking God for guidance means choosing to believe that the divine is answering by signs or symbols or a voice in your head and you’re not making it all up.

Nothing like the body slam of a few critical books to awaken the eighteenyear-old mind. If you went to class and listened, the world got bigger and hairier after Survey 101. Looking back, the thirty-nine-year-old Jocephus remembers, “Nothing—nothing you do, spiritually or otherwise, seems to work to connect you back to God or source or whatever . . . Kierkegaard would talk about faith—that faith is giving into the absurd . . . Faith is really giving into the absurd. Because you can never prove that God exists, anyway . . .”

Getting from Kierkegaard to professional wrestling takes two to three montages and at least three hundred headlocks. Several years after college, Joseph worked as a librarian. During that time period, he also worked on several creative projects: “Me and my brother were writing a screenplay about a character who thinks wrestling is real. I thought, We should really network with local wrestlers . . . to get the screenplay done. One of us should train. I thought I would have ten matches to learn what I needed to learn to make my movie . . . then I just never stopped.” Something about the process of a soft-spoken librarian becoming a pro wrestler seems like it might be a better screenplay, but I’m not one to judge. 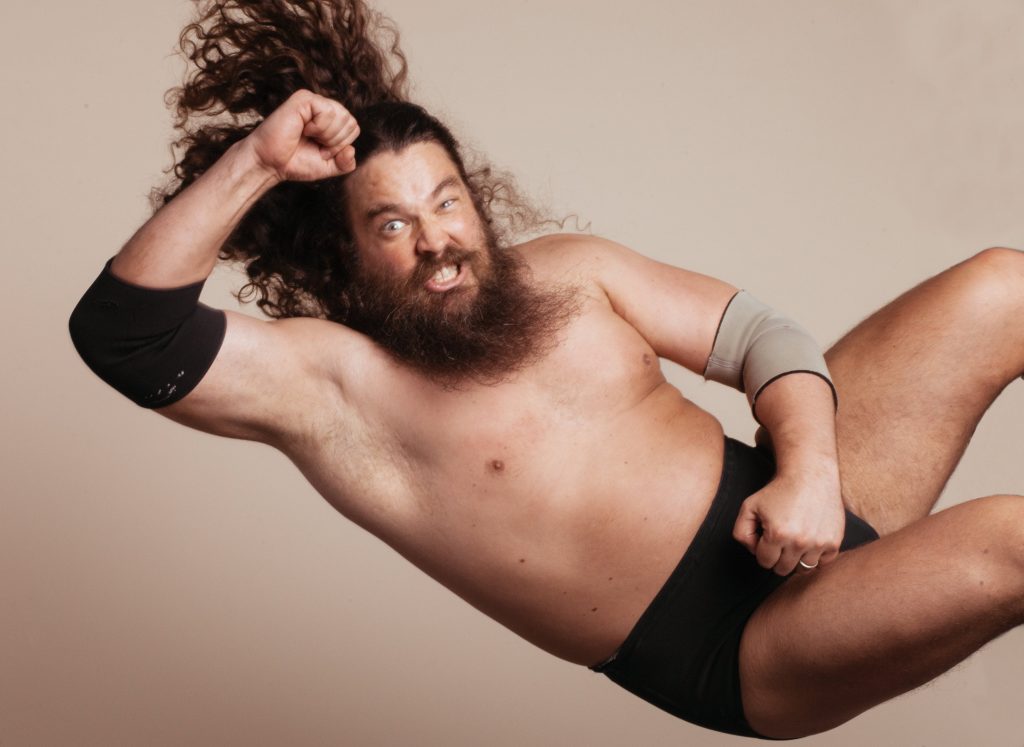 The transition from Joseph to Jocephus started with his attending Stadium Inn wrestling matches and befriending the owner, Tony Falk. Falk and his son, L.T., agreed to train him on the basics one day a week. Lesson one: learn to fall properly. Apparently, the wrestling ring can pack a wallop. Lesson two: learn to “run the ropes.” Interacting with the ropes of a wrestling ring hurts like hell, it turns out. They look like rubber bands, but they’re actually heavy steel covered in plastic. Joseph then began weight training at the YMCA, eventually with a trainer, Benita, and bulked up considerably to about 290 pounds. Benita, known as “Abriella,” would become his wife and wrestling partner.

His first match, he wrestled as “Jocephus the Shelby Street Brawler,” whose backstory was that he grew up street fighting in the rougher, ungentrified East Nashville. He took an indie band approach to promoting his matches. “I plastered Nashville with a poster I had made with my brother. They didn’t look like normal wrestling flyers, which was helpful too. One had my head in the middle and James Joyce and Sartre all surrounding it, and at the bottom it said ‘WRESTLING AT THE STADIUM INN THIS FRIDAY.’ My brother would design them, and I would help with the ideas to put into them.”

He wound up selling out his first match and several other matches until he outgrew the Stadium Inn. To this day, he remains the reigning champ of the (now defunct) Stadium Inn wrestling night. Seven years, a few valuable trainers, and a few hundred matches later, I find Jocephus as a fully developed character.

The last time I remember caring about pro wrestling was around the age of nine or ten in the WWF era dominated by Hulk Hogan, Randy Savage, and Andre the Giant. On a school night in 1988, my mom loaded a friend and me up in our ’72 Lincoln with embarrassing rusty fenders and took us to the Tuttle High School gymnasium to see a wrestling match. I still remember how big the athletes were. I can’t even recall if I thought it was real—that wasn’t the point. These were big men performing extraordinarily athletic feats. It’s arguable that pro wrestlers are the closest things we have to gladiators. Sure, MMA is real fighting, but the fanfare and storylines of wrestling are so much more dramatic and hierarchical, akin to ancient Greek and Roman gladiator rituals—many of which were staged. My buddy and I still remember the wrestlers’ names from that night. That was the last time I saw live wrestling, until I see Jocephus. 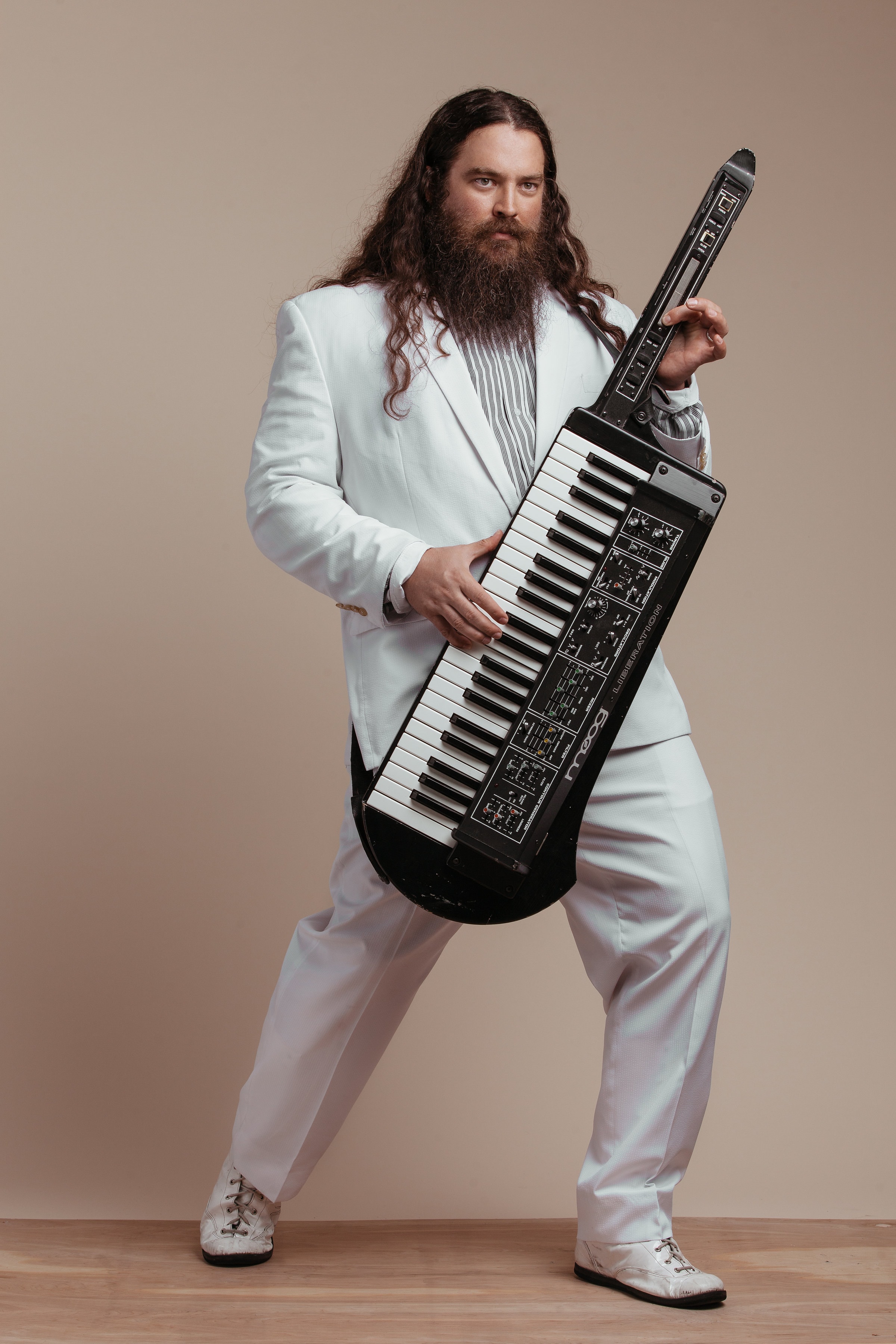 I drive into Clarksville not knowing what to expect, with only simple hopes of grabbing some Chick-fil-A on my way home. I come upon a sign reading “WRESTLING THIS WAY” in thick Sharpie. Clear enough. I pay $25 for my ticket—“VIP” status they call it. That gets me ringside. The Wilma Rudolph Event Center feels fairly new, outfitted for the show with a massive ring, light rig, and sound system. It’s legit. Among the concession offerings for the sold-out show of eight hundred-or-so spectators: pizza, popcorn, nachos, homemade jerky, and Bud Light only.

At 7:05 p.m., the floor lights go down and the ring lights go up. I watch a set of twins (who are surely Prince look-alikes) dance down a catwalk to Tame Impala in feathered cabaret regalia. They are the good guys. They fight another set of twins who are much brawnier and have cornrows—they fight dirty when the referee isn’t looking. The winner of that particular match is decided by who can climb a ladder and grab a briefcase hanging from a cable in the center of the ring. Charlie Chaplin-esque shenanigans ensue. Next, a harlequin character works the crowd into a frenzy by playing the part of an utter simpleton. Then comes the main event, a six-foot-five, 240-pound beast of a man being body slammed onto hundreds of tacks by a monstrous villain in a Texas Chainsaw mask. Later on, I hear the eight-year-old boy sitting next to me crying when Bram the Giant Brit beats Jeff Jarrett by cheating. It turns out the refs in pro wrestling are way worse than the MLB. As fantastical as it is, I admit that even for an educated, skeptical Okie, there is still a suspension of disbelief. I know Penn and Teller aren’t actually magic either, but if I can’t see the trick, it feels real. That suspension makes it pleasurable to join the mob and jeer.

The last match comes and goes, and the emcees are wrapping up the show when the lights go back down. From the corner of the auditorium comes the chainwielding fury of Jocephus. In what seems like a matter of ten seconds, he chokes and chain-whips just about every bouncer and emcee in sight until he gets the microphone. His violence and vitriol seem to have two main themes: 1) He needs to explicitly let the crowd know how dumb and redneck they are, and 2) he needs to publicly communicate to the wrestling commissioner his anger with being deliberately excluded from matches. Then he demands a fight with Clarksville’s hometown pro wrestling hero, Crimson. Jocephus seems to revel in the ire as he walks out of sight to the deafening sound of boos. 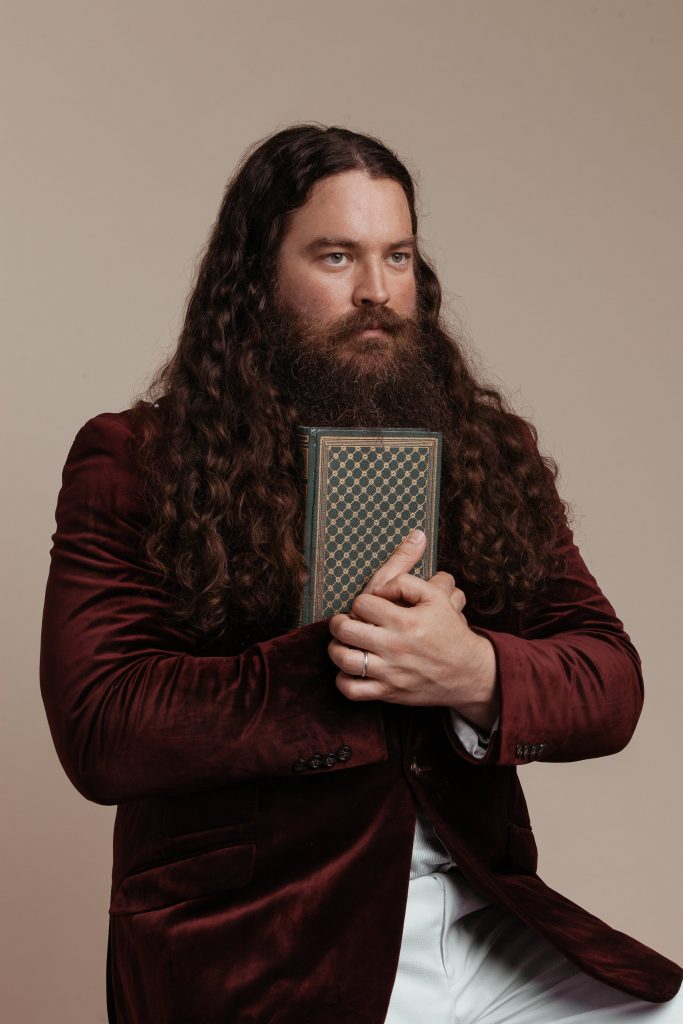 On the drive home, I think about why we’re entertained by something clearly staged. Maybe it’s the athleticism. Maybe it’s the violence. Maybe it’s conflict in general we are enamored with. Nietzsche makes a convincing argument that we all need rivals and that we’re all brutal and must deal frankly with it. He talks at length about the historical Greek olympian and general Miltiades and how a lack of competition led the stagnant warrior to a life of tyranny. Competition in general is way easier to understand than religion and philosophy. It’s primal. Joseph says, “You don’t have to know about Sartre to understand good and evil. My son’s name is ‘Soren,’ after Kierkegaard. You don’t have to know Either/Or to know that a bad guy wants to cheat to win. If you can communicate that to anyone, no matter what their walk of life, you’ve done a good thing. Essentially, you’ve been an entertainer, but maybe you’ve pointed to something else too.”

Joseph is very obviously an anomaly—a straight and narrow family man who dedicates his life to study, creativity, and spectacle. He seems to juggle his life with a zen-like affect. On the one hand, it’s peculiar to see an intellect spending so much time on wrestling—such a hard living, when he could very well be devoting time to being a professor or some other more traditional lifestyle. Then again, creativity often abandons practicality in favor of curiosity. As to why he still does what he does in the face of such bleak odds of success, he says, “I’m still interested in it. That’s the main reason. There’s some financial reward. There’s been physical injury. There’s been all kinds of things, but it still interests my mind to be part of it . . . I love being part of the performance or ritual. I consider wrestling a ritual. It’s sort of tribal. It’s violent. It’s a process that leads to potentially some kind of greater truth, maybe. Good and evil clashing. Let’s do the ritual. Let the buffoons do their thing to show that good will hopefully win in the world.”