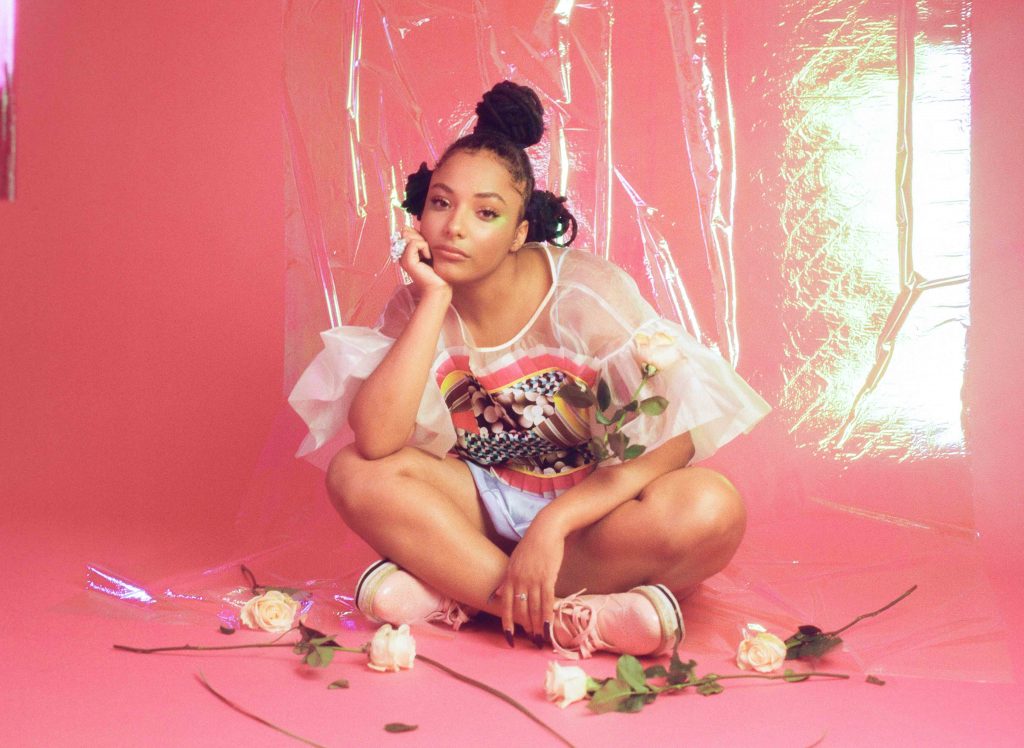 Underestimate Kiya Lacey at your own peril. At just twenty-two, the boundary-pushing alternative R&B singer is already used to proving herself to her older peers in the music industry. “They don’t expect me to be this professional or know what I’m talking about,” Lacey tells me. “People have their own ideas about what’s going to help me be successful. But I’ve reached the most success by just being me.”

It’s dreary, cold, and raining outside, but we’re sharing a cozy booth right before the dinner rush inside East Nashville’s The Wild Cow. She’s starving right after her long photoshoot for this piece, and she’s beaming after hitting it off creatively with our photographer. He sent her a mood board beforehand that coincidentally included some images Lacey had already filed away for style inspiration.

Today, that style includes bright blue dreadlocks twisted into high buns, playful iridescent green eye makeup, and an avant-garde outfit. It seems like she’s channeling her inner Björk, and that’s no accident. “If I could work with anybody it would be her,” Lacey says. “She’s my number one goal right now. I study her.”

Lacey says the experimental Icelandic songwriter might seem like a surprising role model for a young R&B singer, but she’s used to subverting expectations with her art. “What’s pushing me is my younger self who lived in the projects and didn’t know anybody that was into the creative things that I was into.” 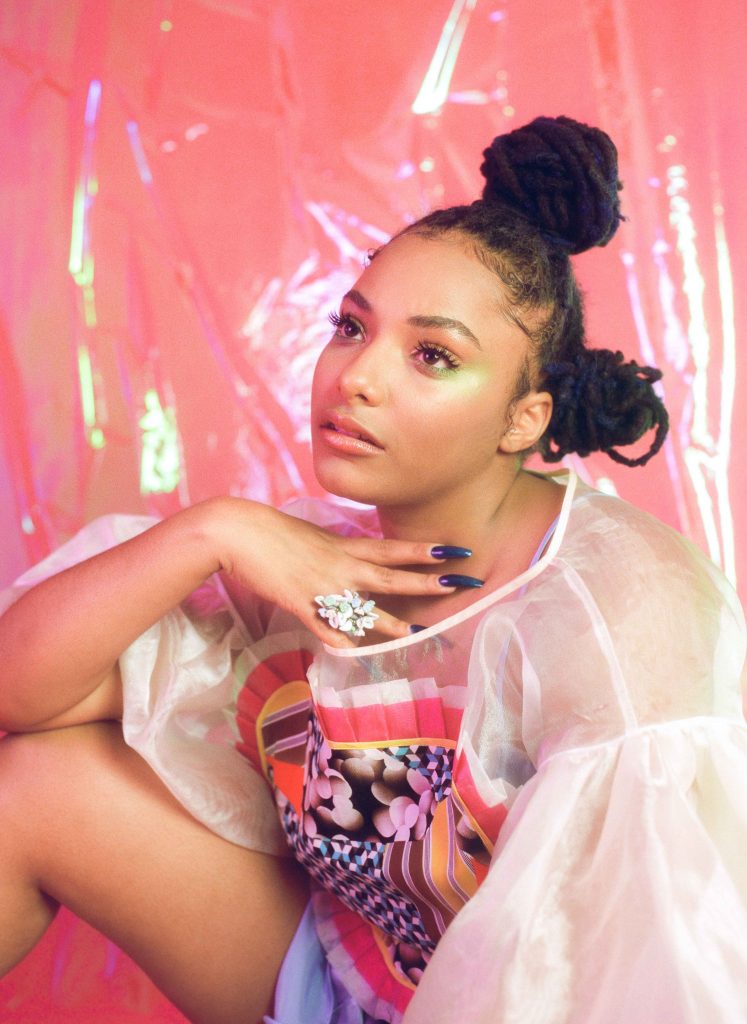 Being true to herself and conveying her eclectic yet distinct creative vision is paramount to Lacey, whose “imaginative, coolly delivered alt-R&B” has already been noticed by NPR and PAPER.

“To be here now . . . it’s crazy [to have] people interested in interviewing me about anything. I’m the oldest of six,” she says. “We grew up in the projects right over here by The Basement East. I grew up knowing about struggles before I should have. I’m ahead of my time in that aspect, but I’m very thankful about it. I didn’t have nothing, but I grew up in a blended family and I didn’t have as much as my peers. I cry for the younger girl inside me who used to think, I have to get my family out of this circumstance. Any time I get a show or an interview I always flash back to my family trying to figure out how to pay bills.”

Lacey’s background, stories, and Afro-Latina heritage are integral to her art. She wants her fans—a word that makes her cringe each time she uses it—who are experiencing their own hardships to feel uplifted and inspired when they hear her songs and show up at her live performances.

“When I’m on stage, I feel like I’m untouchable. I can do what I want, I can say what I want,” Lacey explains. “Sometimes I’ll do a speech and try to do affirmations with people. It’s almost like preaching. I want people to understand that [with] my career . . . You can come from nothing and be somewhere. I just want to be a representation of hope.”

"You can come from nothing and be somewhere. I just want to be a representation of hope.”

Dedicating her life to her passions—art and music—has helped lift Lacey during periods of anxiety and depression. It makes sense, then, that balloons are a recurring symbol in her work. They pop up on stage with her, on her album covers, in her music videos, and even on her clothing.

“Everyone is always happier when you see a balloon,” Lacey says. “It’s a very cool symbol for me. It’s definitely my symbol of hope—that everything is going to be okay. It’s uplifting. It’s everything that I’ve hoped for or dreamed about.”

And people are starting to connect with that message. Take her recent Chicago show, as part of the Red Bull Sound Select showcase.

“One girl drove an hour and a half for the show, and I looked out [into the crowd] and she was crying—she knew every single word!” Lacey beams. “It is a beautiful thing right now to meet people in different states that know my music. I’m on my way to doing something very great, but I’m in transition right now. I have to face my reality of figuring out how to pay bills, but there are also people that are nervous to meet me. It’s a very interesting place to be in.” 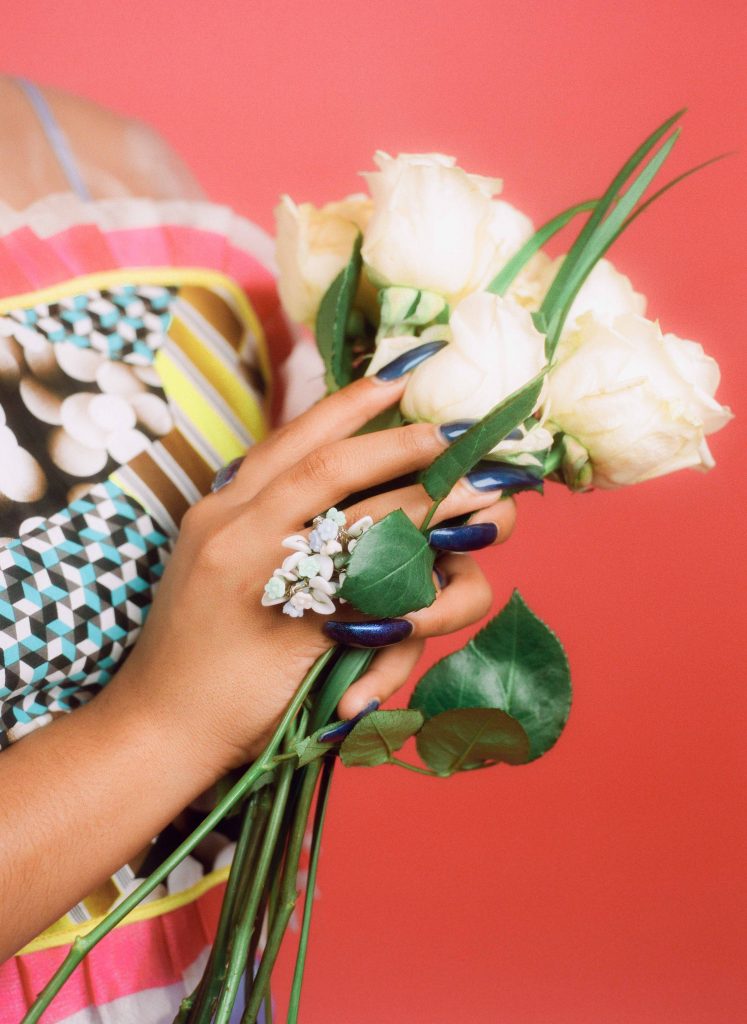 It’s a humbling experience for someone who started out writing songs about her first crush at fifteen (“I went to Harpeth Hall. My first crush was a big deal because I was at an all-girls school!”).

“I used to write poetry in high school that I would never share,” she says. “I taught spoken word classes for this program called Southern Word. We worked with high schools [on] how to perform your spoken word, but I would never share mine. I’ve kept them in my notes and have turned them into songs. Sometimes I just write on a receipt or on a napkin, and I just start collecting all this stuff and I write [a song] based on just a snippet of something.”

In a previous interview, Lacey said of her songwriting: “I share my story, family stories, and other experiences that everyone can relate to.” Knowing this, it’s surprising she didn’t have much of a hand in writing her first album. 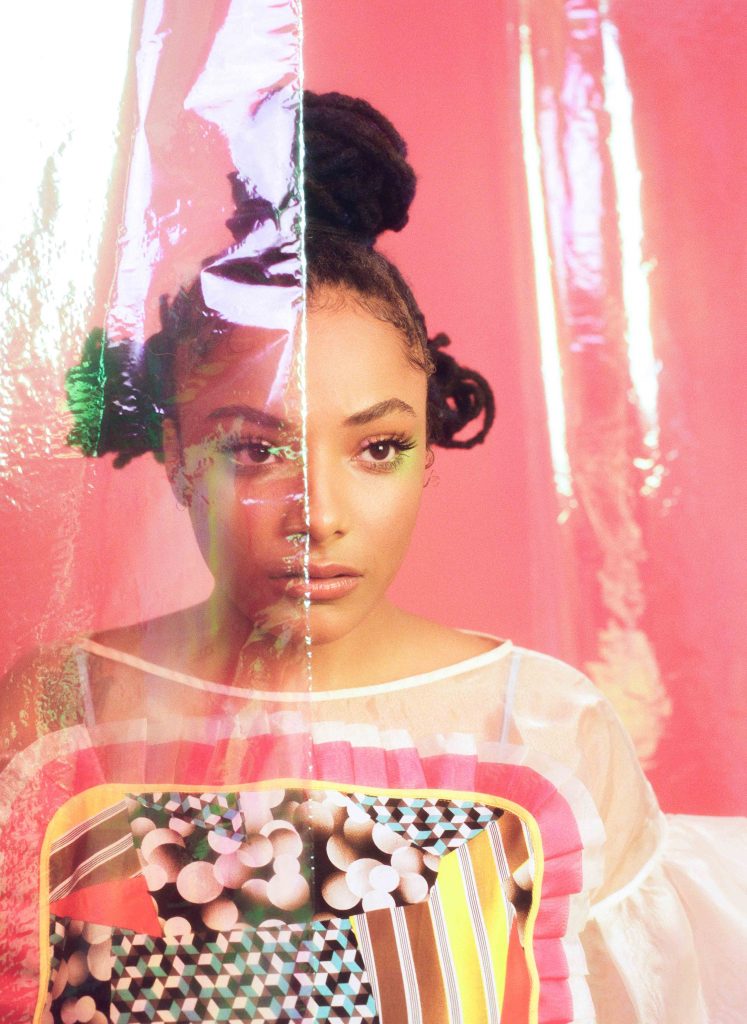 The album landed high on the iTunes jazz charts, and Lacey even opened for Brandy. But it never quite felt like she was being true to herself. A brief brush with reality television served as a wake-up call and set her on her current path.

“I tried out for American Idol when I was fifteen,” Lacey says. “I got to the second round of auditions. It’s nothing like they tell you. It’s so fake. I don’t think I’ll ever do reality TV or a vocal competition—that’s not my route.

“I want to have creative control. I would love a partnership more so than to be on a label because I like expressing myself. I’m young, I’m still learning myself, but I feel like I have a vision now of what I want. Even when I collaborate with a stylist or a makeup artist . . . I’ll ask if they can help me further expand my ideas.”

Since graduating high school, Lacey has shifted her focus to crafting R&B with touches of pop and neo-soul. Her bright, honeyed voice—expertly controlled after that early training as a jazz singer—shines through on her first EP, Fail in Love. Long past first crushes and throwback crooning, this set of decidedly modern and polished songs deals with intense early love and loss—those college-era experiences that tend to leave you a little bit jaded. The first track, “Take a Ride,” is an almost bubblegum-sweet snapshot of the joy and seemingly endless possibilities that come with cruising around town with a crush. But much like celebrated alt-R&B songwriter SZA, Lacey is not afraid to dive into self-reflection and raw emotion. In the intense lead single “I Know,” she delivers confessional lines that deal with uncertainty and self-doubt: “I can’t escape my thoughts, my flaws stick out like thorns / They cut deep.”

In 2016, she continued to push herself artistically and visually, releasing a collection of three singles and an accompanying video titled “Earth Wind & Fire.” With these tracks, the vocal processing is darker, the harmonies are layered, and there are icy electronic flourishes. It all adds up to a ghostly tone that leans toward the witch house movement or James Blake’s early output.

This is a distinctive shift in just one year, and Lacey prides herself on her willingness to jump into different sounds, aesthetics, and artistic mediums.

“I don’t have a traditional look—I have dreadlocks. I used to think you have to be sexy. I love Beyoncé, but I felt like I had to look like her and have a long weave in the wind and wear bodysuits,” Lacey says. “It doesn’t have to just be long hair and bodysuits. It can be short hair, it can be dreadlocks. I wanted to be hot, but now . . . I just want to be art. I feel like being art is more important. I want my [albums] to be collections of art. Designers have collections, and not every collection is the same. If I want to release a whole acoustic album, I might do that. I might want a rock album. I want to be able to experiment with my sound, but still be Kiya.” 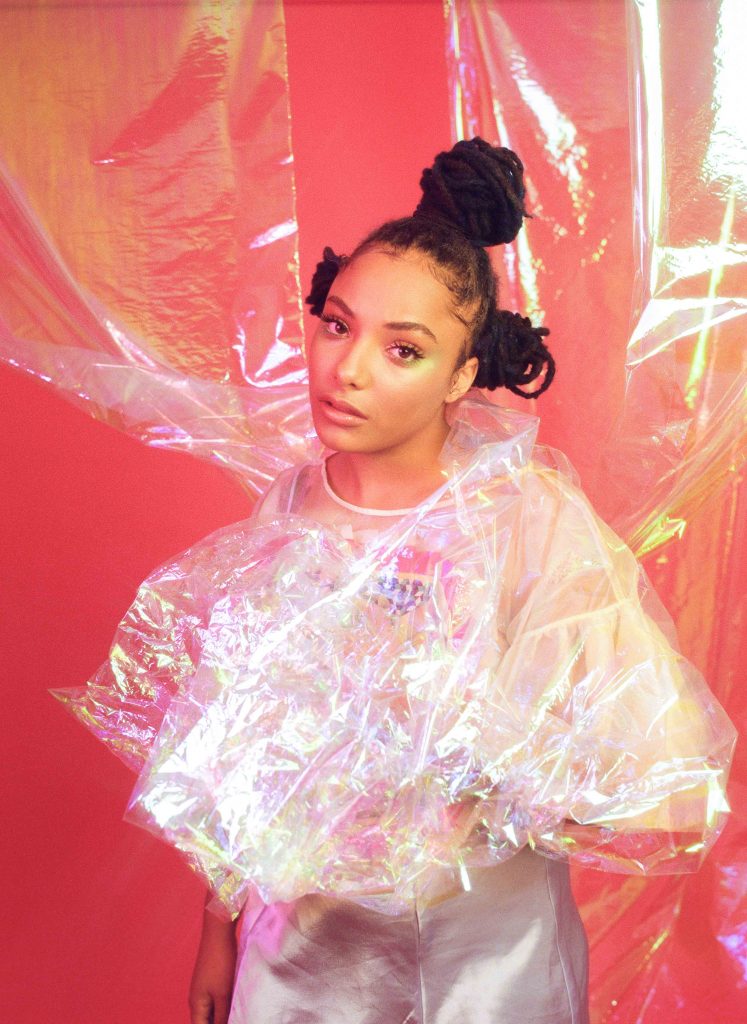 Lacey has always been proud of Nashville’s influence on her songwriting, even though the city tends to neglect her genre in favor of more established scenes.

Lacey’s quick to admit that she’s looking at her career in music from a global perspective. She spent some time living in Atlanta, and she still frequently hops on a bus to spend a few days there in order to perform and learn from the artists in their more established hip-hop and R&B scenes. “I feel like living in Atlanta for a bit helped me figure out how to perform on another level. In Nashville, I’m going to win over hearts because I’m from here. I started doing music at fifteen, so I’m everyone’s little sweetheart. In Atlanta, I’m just another artist.”

Regardless of the city she’s in, Lacey puts in countless hours of serious, grueling work, and it’s already paid off with substantial media buzz and prominent spots in local and national showcases.

“I make daily goals, I make monthly goals, and I make yearly goals, because I do everything,” Lacey says. “So I have to be overly organized, overly prepared. Sometimes I used to feel like that got in the way of my creativity, but now it’s helping because I know what’s going on with my career . . . The more work I put in, the further I go. If I’m slacking then no one’s going to know about me, so I have to be organized about generating mood boards, budgets, and sponsorship decks.” 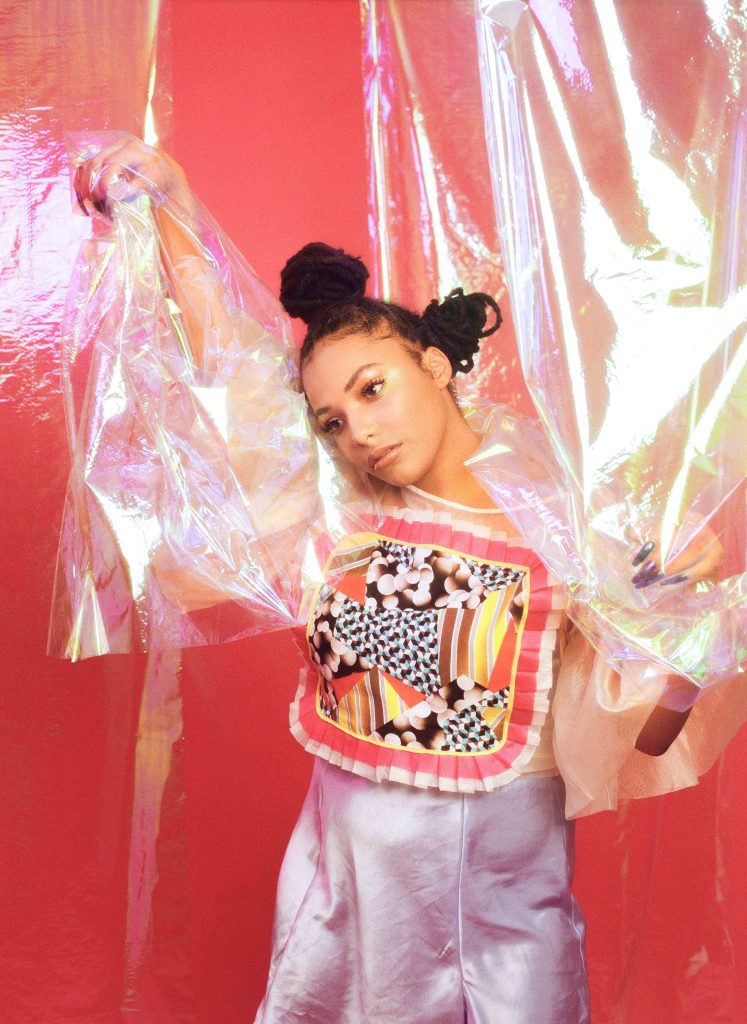 “I want to inspire other women and encourage other women. As I meet other artists that are women, I want to inspire them, I want to encourage them. If we don’t do a song together, I might know someone who will produce something for you. I’m really about encouraging women to do this. We think of the industry as male-dominated right now, and I feel like a shift is going to happen.”

Lacey’s been focused on a new project, and she promises she’ll have new music out in December. And judging by her latest single, “Runaway,” she’s stepped up her game yet again by blending her otherworldly vocals with sleek, club-ready beats.

It looks like she’ll also play some Nashville dates soon, which are not to be missed if you’re a fan of high-energy and incredibly moving performance art. But she’s quick to remind me that she’s thinking beyond Nashville, so touring will be her main focus for 2018.

The print version of this article states that Lacey has a show on January 13 at The Hi Watt. Unfortunately, that show has been cancelled since this issue’s release. We apologize for any inconvenience caused by publishing the date.