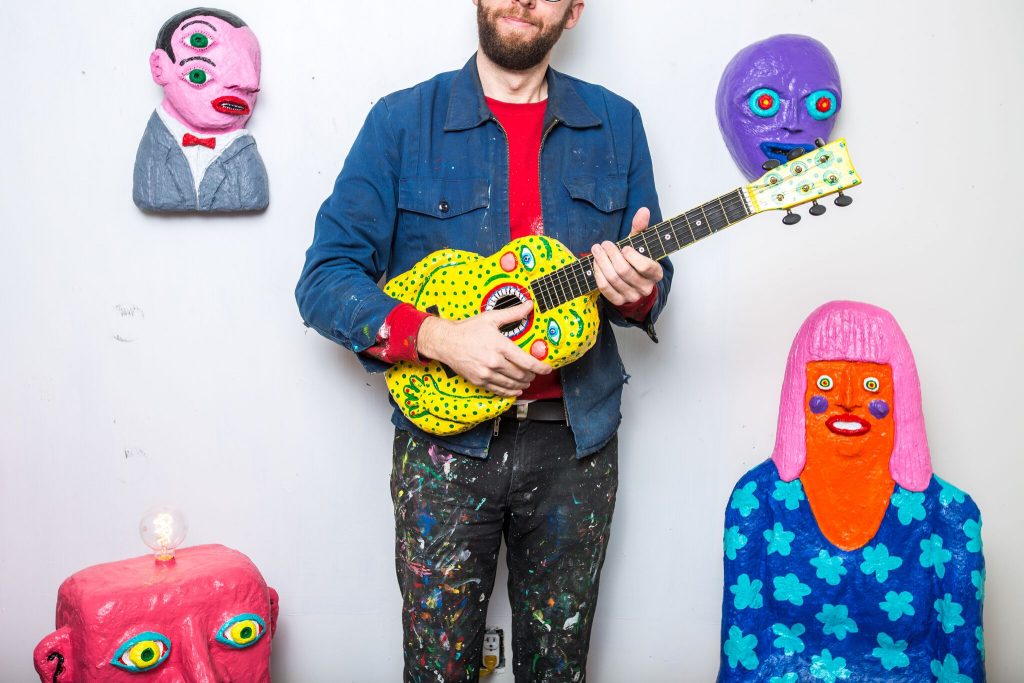 There’s nothing about Brett Douglas Hunter’s chairs—or “cheers,” as his grandma pronounces it—that suggests you should sit on them. First, there’s the fact that sitting on art is a good way to get booted from a gallery. Then there’s the fact that Hunter’s chairs aren’t merely objects to look at; they look back. And when your chair is a green Gumby-looking monster with tiny (kind of cute) horns, horrified yellow eyes, and a red-lipped, gasping mouth, you might feel bad about sitting on her. Even if she is unexpectedly comfortable—or sittable, as Hunter would say.

“I would love it if someone would sit on one every day, but I don’t expect them to,” Hunter says. “I guess you could sit on one and put your shoes on.” Just be careful if you’re lowering yourself onto the blue one, because there’s a goofy, grinning, Muppety penis you’ll need to navigate around. (It’s kind of like sitting on a saddle.)

We first got a taste of Hunter’s bizarro exuberance and mythical, brightly colored sculpture creations a year ago, when he made his solo exhibition debut at Alex Lockwood’s singular Elephant Gallery in North Nashville. Titled Aminals, the exhibition offered viewers a trippy dreamscape filled with cheerful, wacky creatures that seem pulled straight from a child’s imagination. His influences of Pee-wee’s Playhouse and cartoons are apparent and yet distilled, while adding to a conversation populated by other whimsical artists like Misaki Kawai.

It was after this exhibition that Hunter made the move from Carbondale, Illinois, to Nashville. For his next exhibition, Cheers, which will open at Julia Martin Gallery in February, he’s participating in a great folk art tradition: remaking the chair. 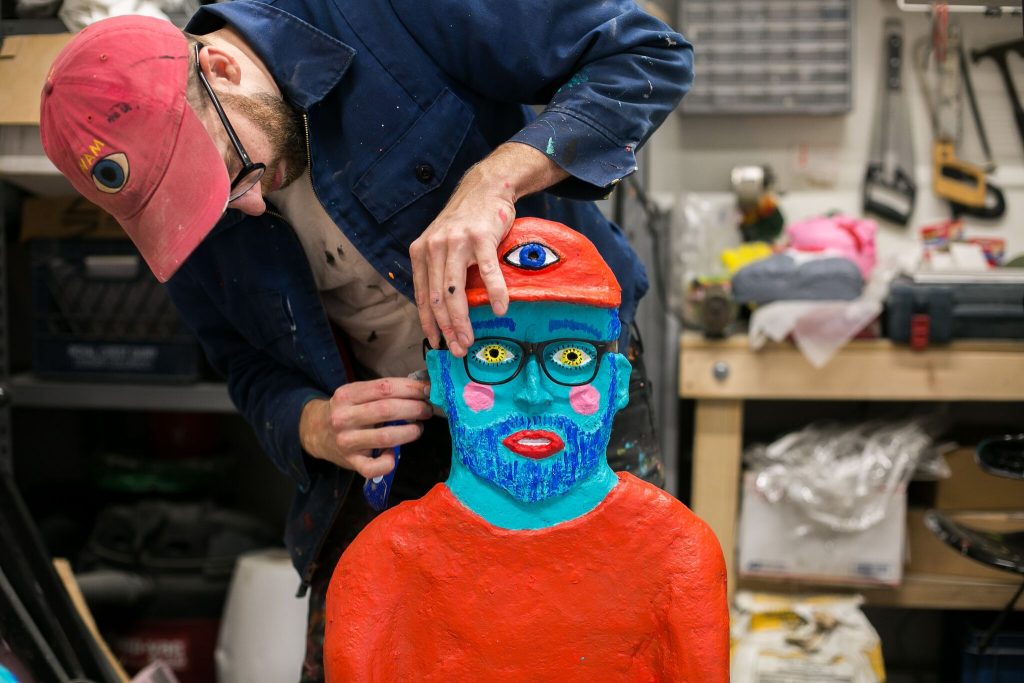 Folk art—rooted in the mundane, the stuff that’s easy to ignore—is about skills passed down through communities, as artists expertly craft home necessities and then add that personal, human element of design. And while chairs frequently have functioned as canvases for folk artists, they have just as often made the transition to high art. “They are objects that seem to most embody everybody’s conscious experience of design,” wrote MOMA curator Paola Antonelli. “In chairs, more than in any other designed object, human beings are clearly the unit of measure.”

I dare you to have a more conscious experience with an object—and a greater awareness of a human as a unit—than when sitting on a “cheer.”

Hunter’s studio, also located at Elephant Gallery, is full of humanoid chairs in the days leading up to the Cheers exhibition. Made from fibrous concrete plastered around an armature, each chair has a face positioned directly behind a potential sitter’s head, and it seems necessary to tell my chair (Gumby monster) that I’ll be on my best behavior. Across the room, a monochromatic red chair with a grimacing face reads “ASS HOLE,” but is the chair the asshole, or am I? Hunter says that an orange woman chair with Pepto-colored hair gives a lot of people the heebie-jeebies, but she just seems like a nice lady to me, albeit a little confused. Perhaps the creepiest one is a child’s chair—a yellow, gargoyle-like gravestone that will definitely come to life and eat your toes.

“I like when people get that goofy chuckle,” Hunter says. “I love that. I like to see people squirm a little bit, I guess.” 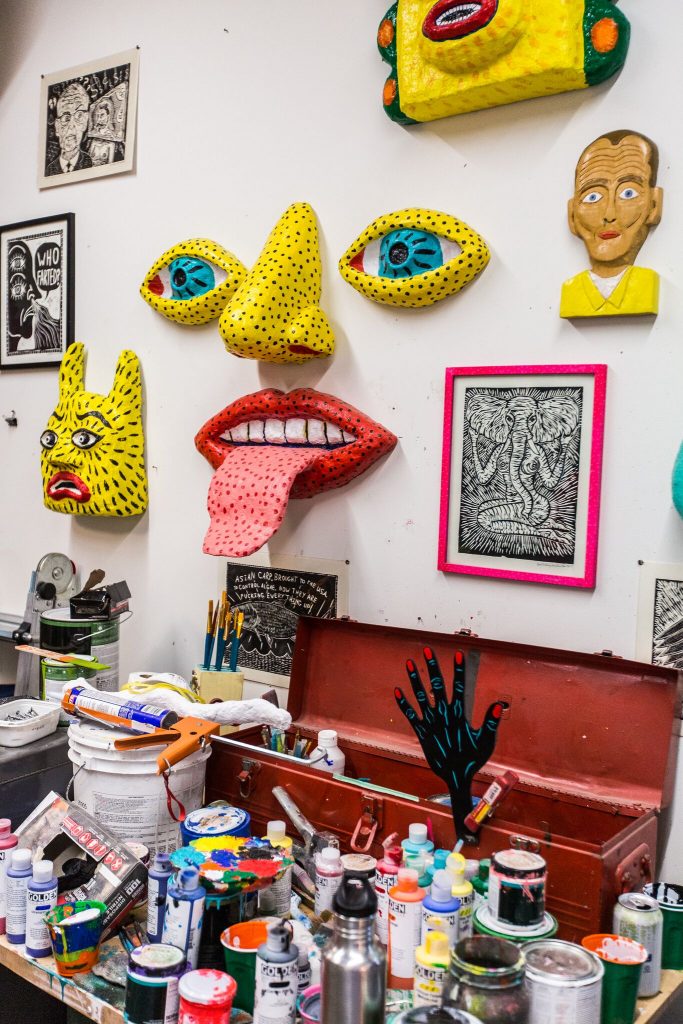 As uproarious as Hunter’s chairs may be, they are, in the tradition of folk art, utilitarian. And some of Hunter’s other pieces can be used as well: On his wall hangs a yellow guitar, remade to look like a creature with a soundhole mouth. It’s technically playable though it’s out of tune. Two grotesque alien children hold up a planter, as if waiting for someone to love them for their creepiness and plant some hydrangeas in their big blue box. “I feel more connected to [folk people] than more academic, art-world kind of things,” Hunter says. “I’m not trained or anything, so naturally, things come out kind of crude. I also love that aesthetic anyway. It’s just a big part of anything I make.”

This mix of weird and usable is the Hunter magic. It stems from a lifelong connection to traditional folk art that began with his grandfather, artist Don Shull, who exhibited a retrospective of twenty-five years of his work at Elephant Gallery last fall.

“In the late ’80s and early ’90s, folk art [had] this big explosion of popularity,” Hunter explains. “Howard Finster was suddenly a rock star. My uncle [Randy Shull] lives in Asheville, and he would go buy stuff from folk artists around down there. [My grandfather] would visit him, and on the way back through Tennessee, he would stop and find the ‘Gourd and Snake Man’ [a.k.a. artist Dow Pugh] and collect things.”

Pugh is one of many artists that Hunter’s family collected from, as well as Minnie Adkins and Howard Finster, and it’s clear these objects had just as much an influence on Hunter’s imagination as his grandfather’s. “I think that’s what kick-started my grandfather’s artwork . . . He saw people who were like him, you know, workers and builders and regular old men, that were using their imagination and sense of humor and color, and I think that inspired him to get weird.”

Shull initially began working with stained glass (one of his lamps hangs above our heads), then moved to wooden, wind-powered whirligigs and whimsical piggy banks. He even built a human-size praying mantis on a bicycle, with legs that pedal (visit Hunter’s Instagram to see a video of Shull pulling the mantis behind his lawn mower).

“He started making that stuff when I was like ten, so it’s definitely a big part of my artistic brain,” Hunter says. “He would let me putter around in the shop with him and use power tools when I was really young. He always would encourage me but not micromanage what I was doing, teach me how to do something but not too much, which was really great. I think if I were to teach something, that’s what I would try to do.” 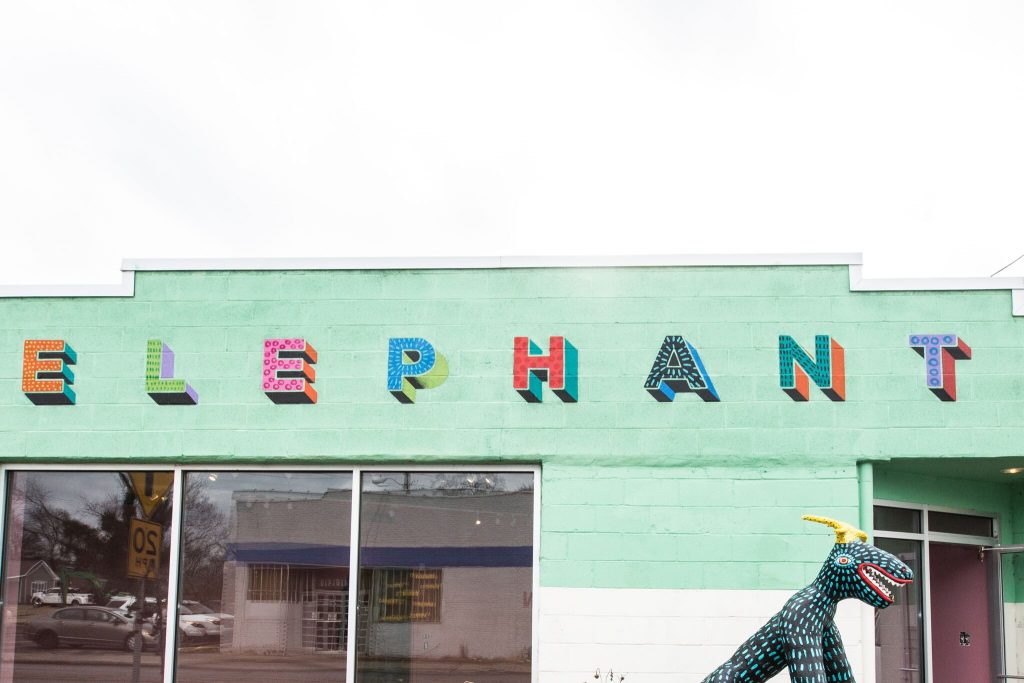 But the artistry in Hunter’s family doesn’t stop there: his uncle, Randy, is an acclaimed painter and furniture designer, and Hunter’s mom, Deb Shull-Andrews, makes mixed-media art and collage-style bags. In the 1990s, Hunter says, she transformed junk chairs, “painting them all bright and crazy.”

In this family, art has always been weird, always pure imagination, always silly. “Something to laugh at,” Hunter says. To be creative is his family’s legacy—which is a lot of pressure. “All the men in my family are builders,” he says. “They built houses by themselves. I feel like I have no skill. I could build a wall, but it would be crooked as hell.”

Perhaps this is where Hunter breaks with folk art: he’s building functional art, but in some ways, form matters more. “I’m not really doing it in a traditional way,” he says of his fibrous concrete material. “It turns out pretty lightweight. Maybe I’m sacrificing some strength there, but I’m not supporting a building or something.” 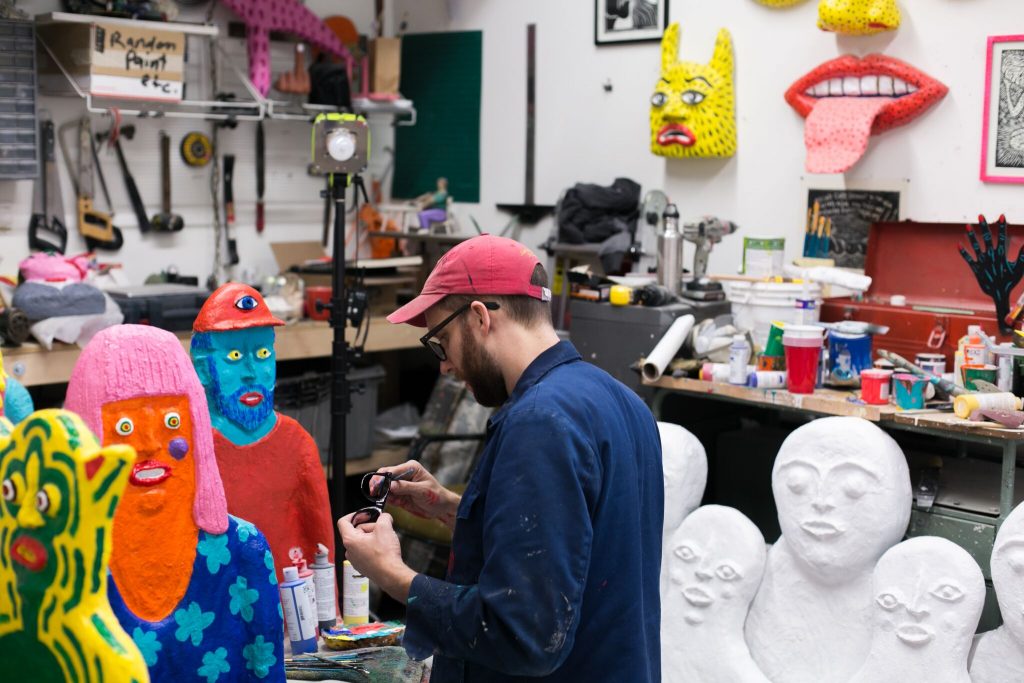 Hunter dropped out of art school after his first year, so everything he’s doing here is self-taught. “The regular school part, the core curriculum—I was a good student in high school, and it bummed me out to be [studying] the same things,” he says. “So I failed English, you know, stuff I knew how to do and just didn’t [do]. Also, being out in the world on my own, and I didn’t have parents to like make me go, I would just not go out of anxious reasons. If I was one minute late, I would just walk right by the class and not go. If I had late homework, I would bail . . . If I did follow through with that, I would have a lot more to talk about with art. I don’t feel like I have a lot to say when I’m talking about it.”

But Hunter (who, by the way, is a full-time artist, so no love lost over that art school) doesn’t need to talk about it. Avoiding explanation is actually an important part of Hunter’s process. He calls it “wei wu wei weird,” a play on wu wei, or non-doing. “Don’t think about it, just keep going, just keep working,” he explains. “Action without action. Just keep working without working too hard.”

In this way he works naturally, impulsively—and quickly enough that his brain doesn’t have a chance to trip his own booby trap. “My biggest hurdle is definitely my own brain, my own self-doubt,” he says. “It’s probably one of the reasons I don’t stop and think about why and what I’m doing, because if I do, I get so blocked up in a weird feedback loop that I can’t push forward.”

Fortunately, with this method, art comes as easily for Hunter as play comes to children. Not that he’s wholesome, of course—more like adolescent. “I always kind of lean on the childish joke,” he warns. “I put a dick on that chair or a swear word, so I guess it is kind of an adolescent place to be. Between serious and funny, between childlike and pornographic and gross.”

Though inspired by the folk artists before him, and by the brilliant, creative members of his own family, Hunter has a style all his own. And for the record, his grandma disapproved of the penis chair—but she laughed at it too.