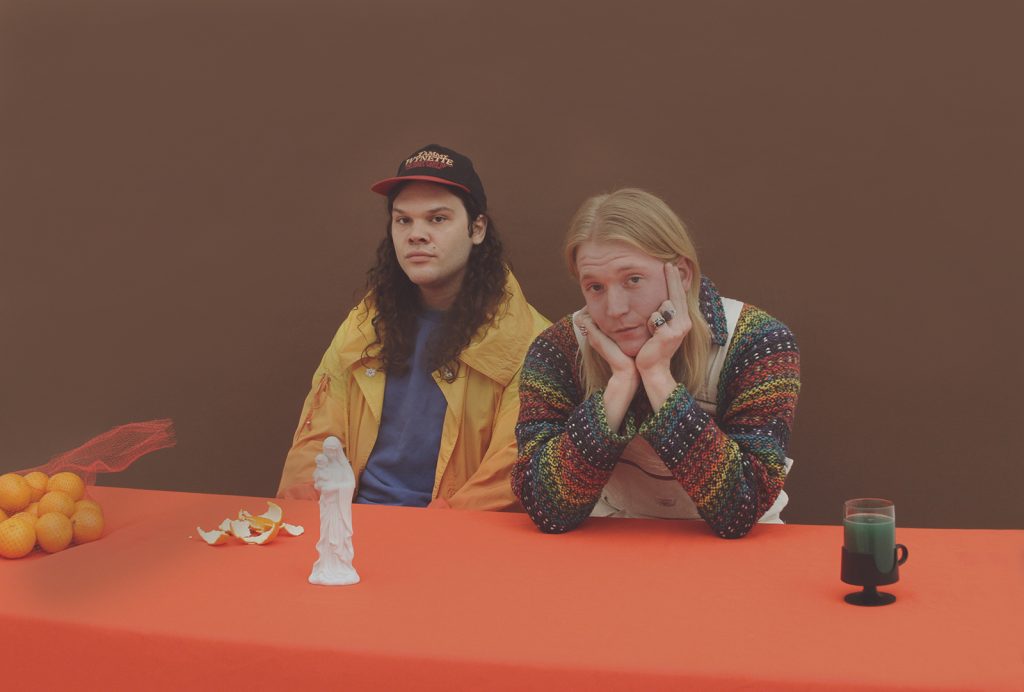 LET’S FACE IT, AS FAR AS CHANGE GOES, 2016 WAS A YEAR FOR THE BOOKS. From the nation’s politics to the global economy, it was a year where nothing seemed safe from transition.

Changing winds have been blowing heavily through Nashville for more than half a decade now. But they’ve been particularly gusty the past few years, and 2016 seemed to be the stormiest yet. From band breakups to venue closings to ongoing construction and gentrification, we were reminded on a near-daily basis that change is an inevitable fact of life.

So how do you accept and embrace change while still preserving our city’s defining institutions and traditions? Where is the balance?

That’s a million-dollar question with no simple approach or easy answer. There are no quick fixes. Still, Johny Fisher and Aaron Martin are doing their part to contribute to a solution. Their new musical collaboration, Okey Dokey, is a project focused on community and aimed at bridging the old and the new.

It started around New Year’s 2016, when Fisher got the itch to start a new project. The local rock scene was experiencing a string of band breakups at the time (including that of his own outfit, indie stalwarts Sol Cat). Fisher also plays guitar for The Weeks, who had just begun writing a new record and had a relatively quiet year ahead. Faced with the prospect of too much idle time, Fisher approached former Sol Cat bandmate and visual artist, Aaron Martin, with an offer to start a new band. 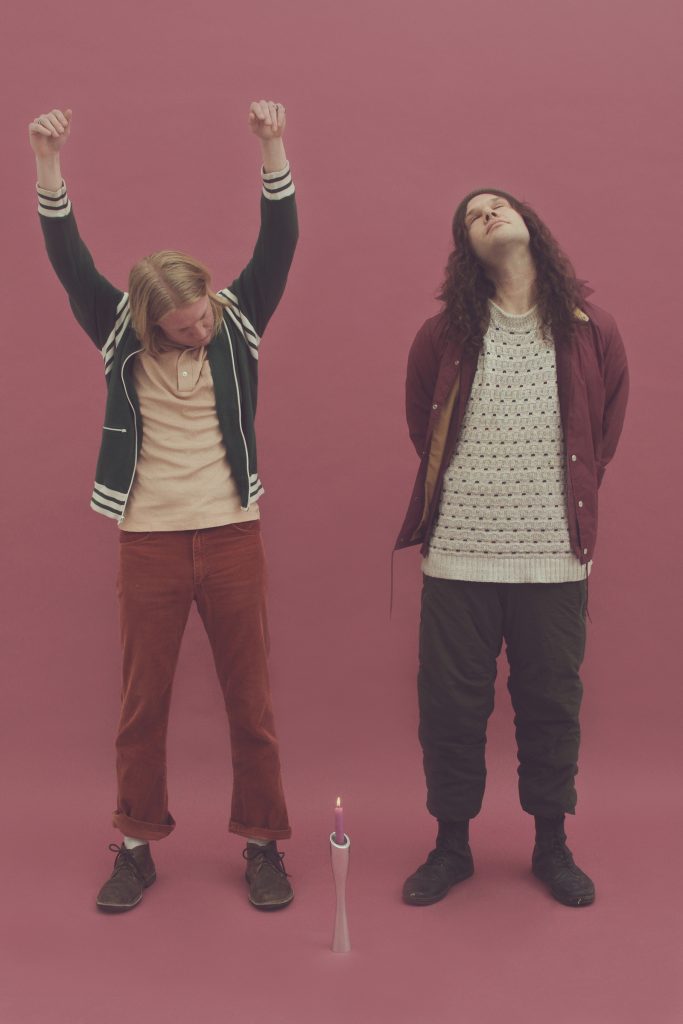 “I called Aaron and met up with him at Halcyon Bike Shop. Then we went to a little party after,” Fisher recalls. Martin, Fisher, and I are catching a bite to eat at Edley’s Barbecue in 12South. It’s almost a year later, and we’re back on the same block, just a couple buildings down from the aforementioned Halcyon Bike Shop where it all began.

Fisher explains that when they left the party, the pair went back to his house, a cabin twenty minutes outside of the city, and recorded their first song as Okey Dokey in his basement.

“That recording is even on the album. Whatever we would demo in my house just became the record,” Fisher says.

Martin sits up in his chair and chimes in, “It all happened pretty quick. After that, we just wrote as much as we could. We had about fifteen or sixteen songs after five or six months. Then we cut it a bit back for the record.” The finished product, Love You, Mean It, is a highly eclectic collection of soul, R&B, and doowop songs tinged in psychedelia and wrapped in hints of folk, surf, alternative country, lo-fi, and more. It finally drops at the end of this month, just over a year since the band penned their first tune.

“WITH NASHVILLE GROWING AS MUCH AS IT IS, COMMUNITY GETS DILUTED, BECAUSE WHAT MEANT A LOT TO NASHVILLE FOUR YEARS AGO MEANS LESS TO NASHVILLE NOW.”

As the duo continues to recall their early days, Martin reveals to me that he was only willing to start Okey Dokey under special conditions. “When we first got together, Johny was like, ‘I wanna do a new project.’ And I said, ‘Alright, cool, but I want it to be just you & I as far as what people see.’” He pauses thoughtfully. “Because at that point there are personalities that people can attach to. And I feel like that translates with way more people than having a bunch of dudes in a band standing stoically.

“And I told him that I want it to be fun! I wanna make this bigger than just the two of us writing music. We can start these songs, but I want to bring in people that we care about that are talented and we respect and get them to help us find what we’re going for. I really wanna collaborate with our friends. I want it to be a community piece that involves a lot of people. I just feel like the scope of what we can do is just a lot bigger that way.”

Those ambitious guidelines still define Okey Dokey’s unique approach, one that highly stresses community. “In the beginning, Johny brought up Willie Nelson and some of the other outlaw country dudes. They would sing about each other in their songs and do shout-outs and stuff. We wanted to do something more like that, but kind of in our realm.”

Okey Dokey’s approach is heavily inspired by The Highwaymen as well as hip-hop music, which “is having more fun,” as Martin bluntly tells it. “I can’t tell you how much I enjoy seeing Vince Staples on a track with DJ Shadow or something. Or [all of the collaborations in] A$AP Mob.

“With rock music, or whatever you wanna call it, you never see a record that’s just, ‘This song featuring this dude, that dude, and this other dude,’” Martin explains. “But then there’s like all this awesome hip-hop coming out. And it’s one guy with ultra personality, and you feel like you know him in and out. And his friends are making cameos and stuff.” 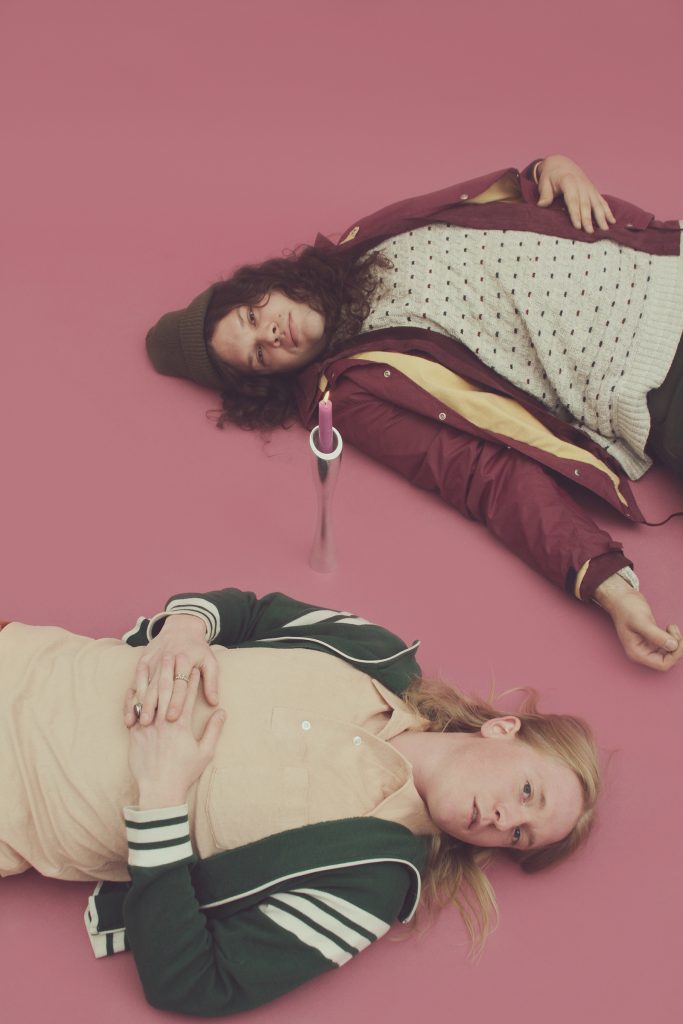 It’s the emphasis on big personalities, recurring characters, and free-flowing collaborations that most attracts Martin and Fisher to hip-hop’s ethos. In other words, they’re all about the squad.

So Martin and Fisher enlisted a who’s who of the best players in Nashville’s indie rock scene to help them build Okey Dokey’s squad. They recruited members from Bully, The Weeks, Rayland Baxter, Wild Child, Ron Gallo, Kansas Bible Company, and many more—well over a dozen individual musicians in all.

They’re quick to confess that it wasn’t easy convincing everyone. “The hardest part was trying to convey to people what we were doing,” Fisher admits with a chuckle. “We’d approach some people like, ‘Hey, you should come sing on a song or play guitar on this record.’ And they’d be like, ‘Well, I already have a band. I can’t join your band.’ And we’d say, ‘We don’t want you to join our band! We want you to help us make a great record that people care about.’”

Fisher’s enthusiasm is infectious as he explains the memorable recording process for Love You, Mean It. “No one tracked in the same room. Everyone was completely separated during it all. Some of the guys doing stuff for us would be like, ‘I don’t get this. I don’t have any direction. This just sounds weird.’ But when we’d finish, they’d hear it and say, ‘This sounds amazing!’”

Okey Dokey recorded most of the album at Fisher’s cabin, and he tracked everything himself on a brand-new home recording setup. “I bought it for myself as my own Christmas gift,” he explains. “We’d create the bones, and everyone else’s parts were usually [recorded] at their house, with the exception of Ron Gallo, who came to our place.” 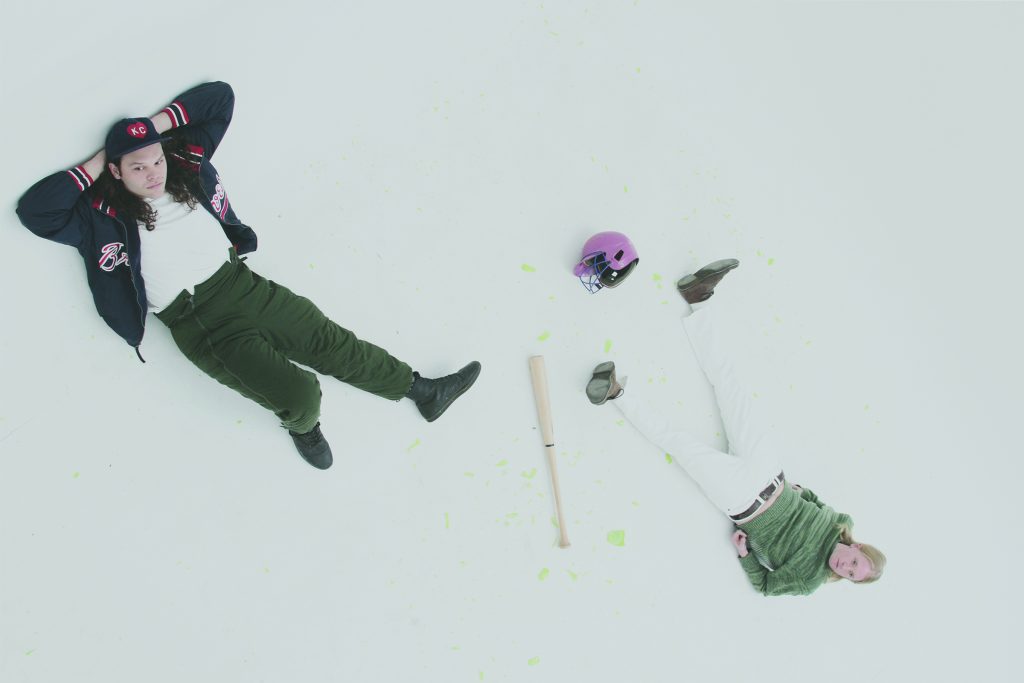 The final recordings are distinctive and idiosyncratic. Love You, Mean It is by no means your typical rock ‘n’ roll album. Fisher attributes part of that to the unique recording process. “When everything’s recorded at different times, no one is perfectly on with each other. So it’s got this wonky, live feel to it.” He’s also quick to point out: “We don’t have one single guitar solo on our record. But we have a saxophone solo. And a synth solo.”

The two promotional singles for Love You, Mean It, “Wavy Gravy” and “Congenial Man,” display the band’s signature swing and slow-burning soul, highlighted by Martin’s captivating, crooning falsetto. They’re the only two songs the band has put out thus far, aside from a Christmas single collaboration with Kansas Bible Company, released under the moniker The Nashville Country Cowboys. Those three singles have been more than enough to build a huge buzz around the band’s upcoming debut.

That’s thanks in part to how many players are involved in the Okey Dokey universe. “[Involving] a lot of bands that care [about the music] helps us with promotion and awareness,” Fisher says. “Whenever we post a video, we can have five, six, seven bands all posting. So our potential fan base or demographic that we can promote to amplifies like twenty times.”

Or as Martin puts it, “We are not the reason Okey Dokey is cool. It’s because Nashville has given us a huge group of talented friends and peers. We all hang. We all love each other. It’s just keeping it all in the family, you know?”

There are other perks to their peculiar model. “It’s like a writing house as well. We can create a huge catalog, and this is the best way,” Fisher explains. “If we wanna make a pop song, we just contact one of our established pop friends and we ask to do a song together.” That recently happened with Night Beds’ Winston Yellen. 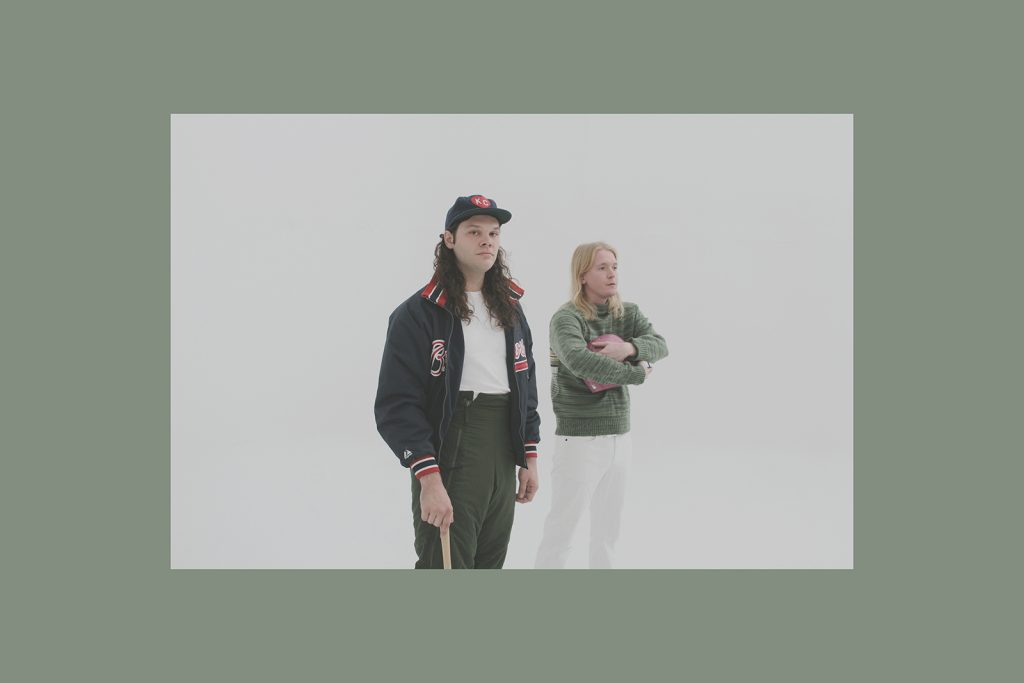 “We’ve never written a pop song before. But it ended up being sick,” Martin says. “But it’s not an Okey Dokey song. It’s Okey Dokey producing a song—Winston featuring Okey Dokey. It’s something else we can do that’s not just ‘a band.’”

As a result of years spent cutting their teeth in local bands, Fisher and Martin have the wizened outlook of veterans. And they’re using their experience and resources to adapt to a new era. “Living in Nashville, it’s an industry town. And I feel that if you don’t just absorb some of that through your skin, then you’re missing some of the essence of the town,” Martin tells me.

The pair want Okey Dokey to be an example of how to adapt to the city’s evolving industry and scene.

“With Nashville growing as much as it is, community gets diluted, because what meant a lot to Nashville four years ago means less to Nashville now,” Fisher reflects. “So I think with the boom of new people living here and just new renters and musicians, you almost have to create a new community for New Nashville out of the old parts if you want it to matter.”

Fisher continues, “If we’re the townies, then we should be setting an example of if you move here, this is the culture. We have every right to be the most collaborative, productive place. We have studios, we have labels, we have management, we have booking agents, we have venues. Where else can you say that you have ASCAP, SESAC, and BMI all next door to each other?”

At this point in our conversation, Fisher and Martin are finishing each other’s sentences. “Thousands of people [around the country] would love to be on SESAC. But just because you live in Nashville, the prospect of them knowing your career and being like, ‘Yeah, c’mon!’ is so much higher,” Martin points out. Fisher picks up right on cue: “My question is, why live here and then fight it? Why work against your strengths?”