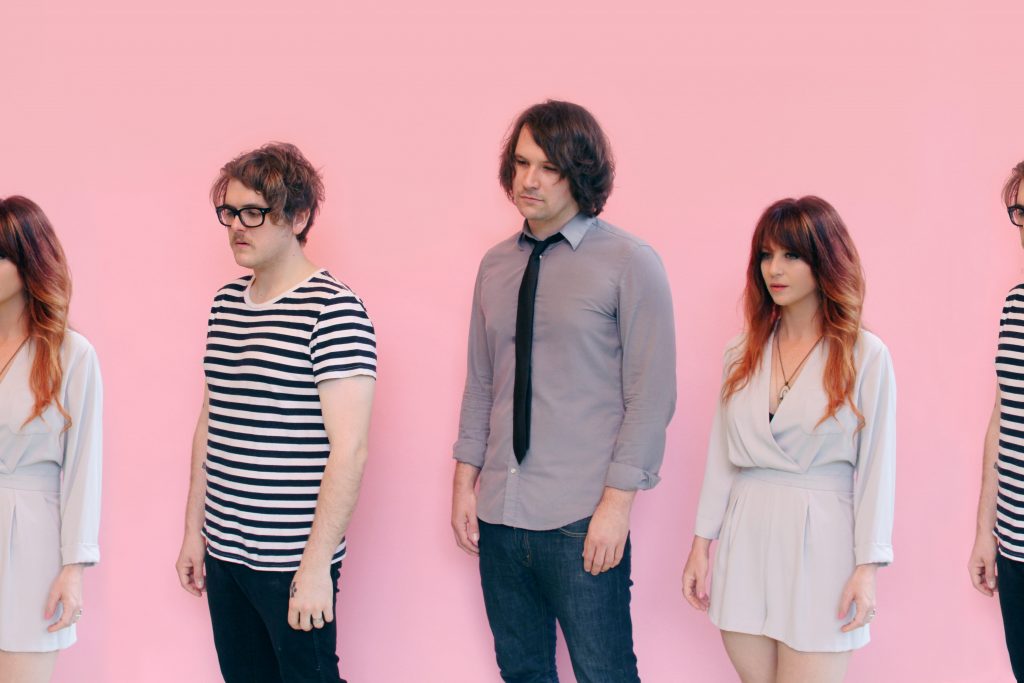 JARED CORDER AND ANDY HERRIN are sitting shoulder to shoulder in the back corner of Pinewood Social on a Wednesday night. Kristyn Corder is catty-corner to Jared, her husband, who’s sipping a Miller High Life. It’s their date night.

Sorry for third-wheeling—fourth wheeling, I guess.

“Oh no!” Kristyn reassures me after setting down her almond milk cappuccino. “We’re not like, on a date, but we’re definitely in date-night mode. When you travel a lot, you have to set aside certain times.”

*repeat repeat, the musical manifestation of this date night trio, just got back from a twoweek stint in the Northeast. They should be tired from the constant slew of short tours, the promotion for their upcoming sophomore album, Floral Canyon (set to release digitally July 15), and the strain that comes with touring the country in a small Virgin van, but they don’t look it. Jared’s brown hair is somewhat messy as usual, but it’s not because he’s sluggish. He seems oddly composed and caffeinated at the same time.

“I have a lot of energy,” he says. “I just want to rock out, and Kristyn is very good at being poised. That dynamic plays out on the road. If it were just Andy and me, we could probably make do cramming in the van, getting sweaty, and sleeping on the couch. Kristyn helps keep things together.”

“So we turned the middle of the van into a living room,” Kristyn adds. “It’s got a bean bag chair, tapestry, and you can push a button and the backseat turns into a bed.” 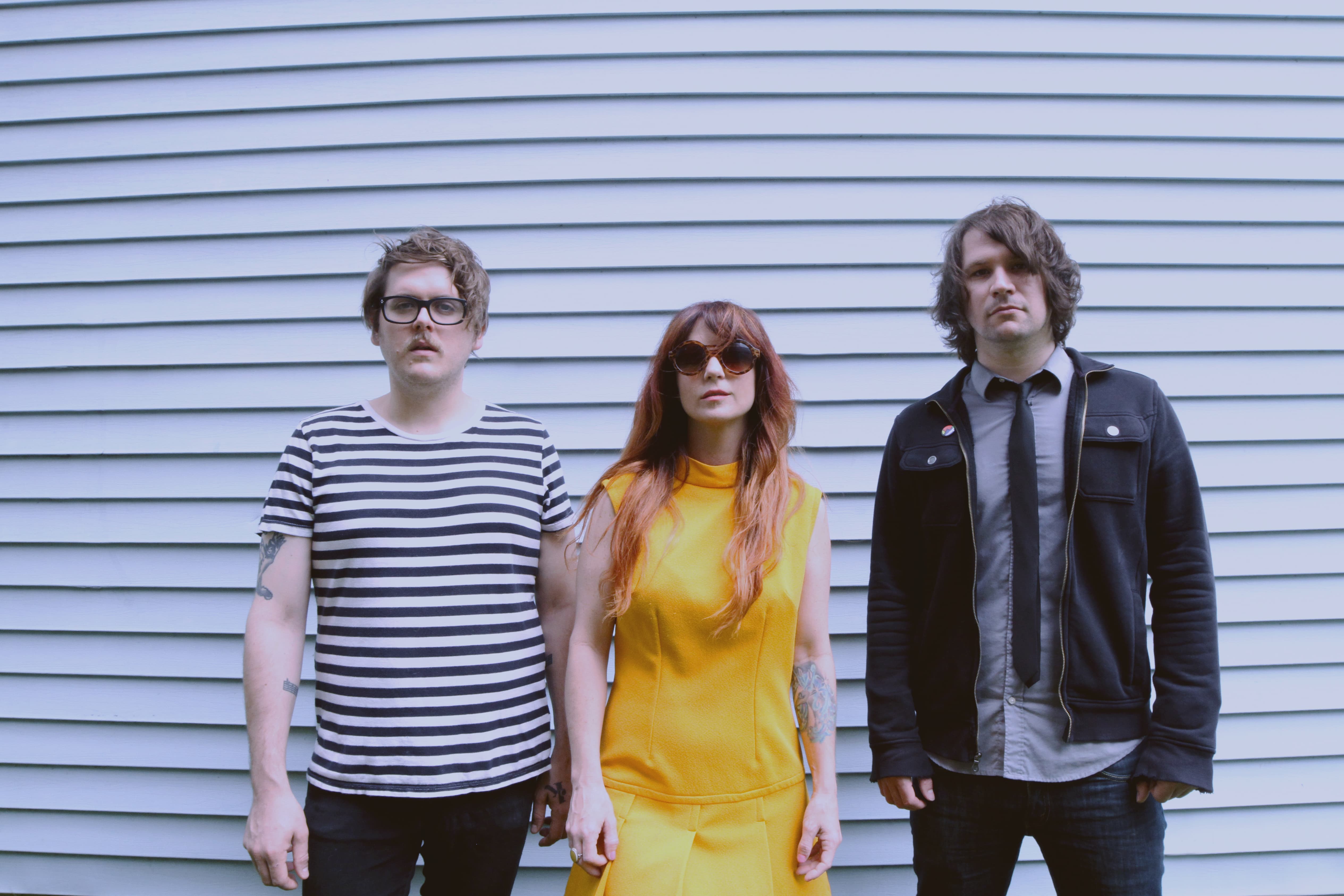 “It’s very romantic,” Jared says, and Kristyn laughs. No, they don’t roll like the most glamorous band in the world, and the soul in their music isn’t fueled by marketable heartbreak, but that’s the way they like it. What they lack in world-weariness they make up for in road-trodden romance, talent, and band chemistry.

Jared and Kristyn married in October 2012 and started living at a house on Shelby Avenue. Kristyn was doing branding and design for Jared’s then-dwindling pop rock band via her marketing company Apple Road. Jared had lost his job at FYE (where he met Andy) months before when the legendary record store closed its doors. They were at a bit of a crossroads, where Jared had a particular vision for how he wanted his music to sound but he wasn’t getting it from his band, and Kristyn was dedicated to helping him develop any new projects that might come along. On the other end of things, Andy had also lost his job when FYE shut down, and his own band fell apart a few months later. It was the perfect storm that led to the beachy pop rock inception of *repeat repeat, but to appreciate the story you have to explore each member’s musical backgrounds.

Jared grew up in Gilbert, Arizona—a suburban town he compares to the neighborhood on Weeds—in a devout Christian home. He was homeschooled, something he always hated, and his parents signed him up for club sports every year. “I was so bad at all of them,” he says. “I was young and adolescent, and I was starting to like girls. I didn’t have a way to impress them because I sucked at sports.” 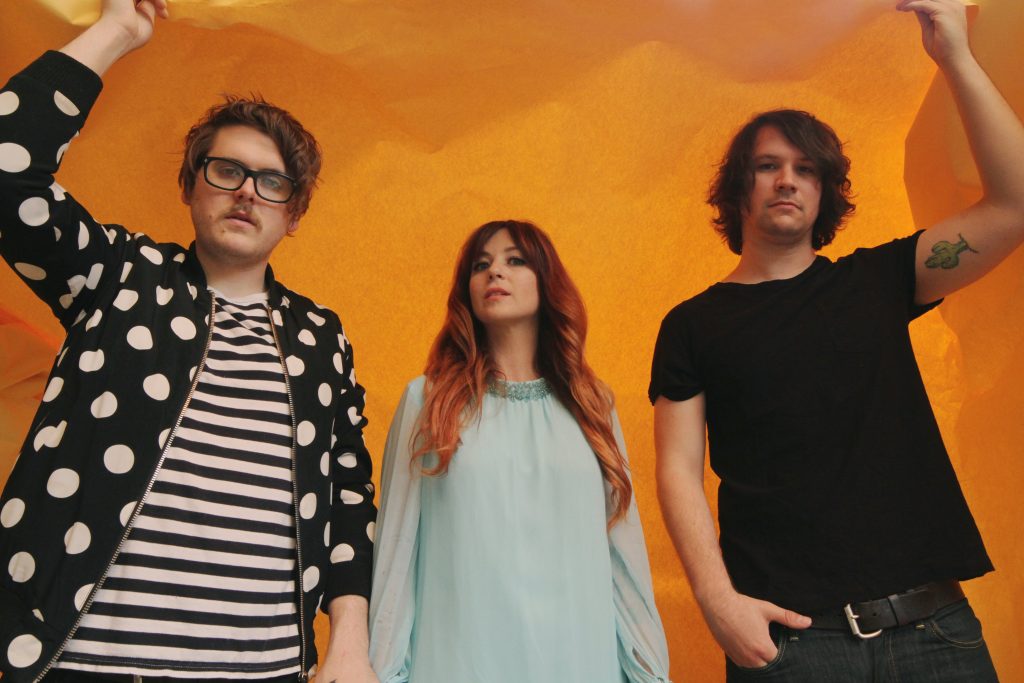 But then—an ironic blessing disguised as a curse—he broke his foot while trying to impress a girl by doing tricks on a carnival slide. It was right at the beginning of summer break, and there wasn’t much to do in his small town when you couldn’t use your foot, so he stayed indoors and practiced on his dad’s electric guitar and amp. “I just sat there for months teaching myself the instrument,” he says. “I realized that was the thing that could impress all the cute girls.”

Years later, after begging his parents to let him enroll in normal school, they let him try and test into community college, which he did at age sixteen. Unsurprisingly, he was exposed to some of the less-than-pious habits of early- to mid-twentysomethings in college 101 courses—smoking, drinking, and rock music.

“It was a totally different world than what I had grown up with,” he says. “But I ate it up and loved every second of it.” Two years in, he transferred to Arizona State, where he earned his bachelor’s in classical guitar at age twenty-one. After graduating, he moved to Nashville in 2009 to pursue a career in music, and he got a job at FYE to make ends meet.

Enter Andy—a softer-spoken band member than Jared, but louder on the drums than Jared is on the guitar and Kristyn is on the synthesizer. He grew up in Alton, Illinois, and, like Jared, came upon his instrument by way of seeming misfortune. When he was ten years old, he asked for a guitar for Christmas. His dad, who was a little tipsy when Andy asked, thought he said drums, and when Christmas morning came Andy was too polite to act disappointed. 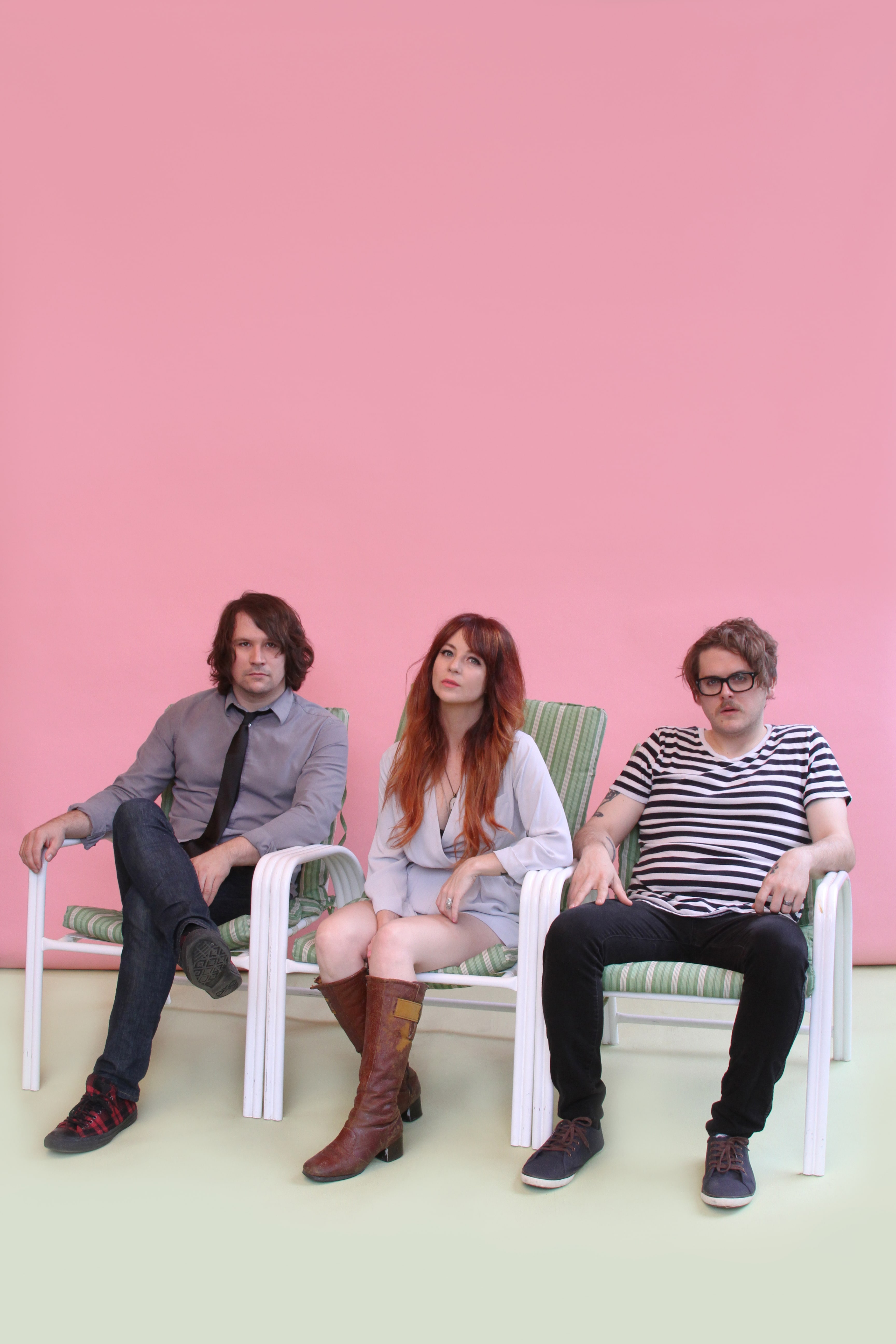 “So I just sat down, and here I am all these years later!” he remembers fondly. “I would have enjoyed drums more than guitar anyway, so maybe my dad just knew that.”

When the time came, Andy went to community college and earned an associate of arts degree, then in 2011 he moved to Nashville to try and find studio work. In October he got a job at FYE.

“I remember the first time we met,” Andy says to Jared. “It was my first day at FYE, and all they had to give me was this XXL store shirt to wear. So I was embarrassed because I had this nightgown of a shirt on, and someone introduced us and you were wearing a leather jacket and sunglasses. You were clocking in, and you looked at me and said, ‘Right on,’ and walked away. I remember thinking, Man, that guy is cool.”

Everyone laughs, and Kristyn and Jared look at each other. Their love is obvious by these looks, if not by their forearm tattoos of each other’s initials, and it’s hard to believe they haven’t always known each other.

But Kristyn moved to Nashville two years before Jared, and she didn’t come here to be a pop rock singer. She grew up in Katy, Texas, before attending SMU in Dallas with hopes of pursuing a career in acting. After one semester, she transferred to UC Santa Barbara in California, and then she transferred to the American Academy of Dramatic Arts in L.A.

“I wanted to be in sitcoms originally,” she says. “After I graduated, though, I got some work at one of the top ten PR firms. They did Taco Bell and Hilton Hotels and stuff like that. I wanted to keep moving, and I ended up in Nashville. I started Apple Road here.” 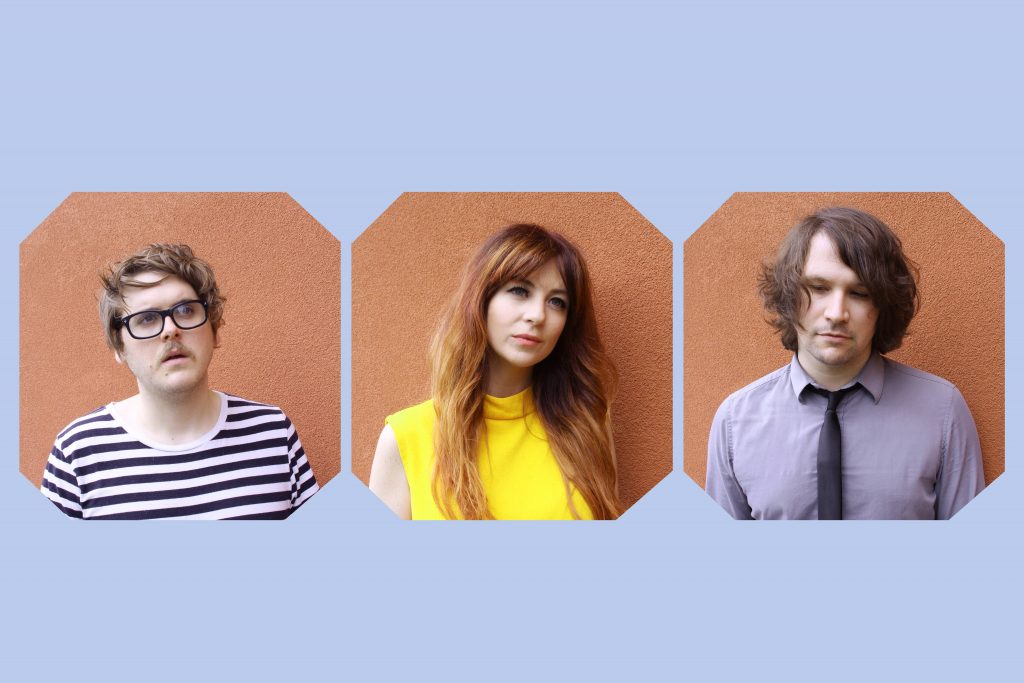 It was Apple Road that brought her and Jared together. While working with the headlining band at a show Jared’s old band was playing, she met him afterward and they started talking. “I just got the biggest kick out of him as a front man,” Kristyn says. “So I started helping him develop his band with branding and graphic design stuff. Later on we started dating, and the rest is history.”

Now we’re back to that crossroads in 2012. Just a few months after the wedding, Jared and Andy were looking for work and new musical outlets, and Kristyn was trying to get Apple Road off the ground. Jared was also in the midst of working with Nashville producer Gregory Lattimer (Albert Hammond Jr. of The Strokes), who was pushing him to seek out bandmates to play his new music. Jared called Andy out of the blue.

“My initial thought was no way,” Andy remembers. “Just because starting a band, starting another one, is such a hard thing, you know? But I told him we could see how it goes, and we started practicing. Kristyn kind of hung around and gave us tips every now and again.” Kristyn started singing the same unintentional way that Andy and Jared had picked up their instruments. While showing some of their tunes to

Lattimer, the boys called Kristyn in to sing harmonies as a model for what they would be if they could find a female singer. “Lattimer just started laughing,” Jared says. “He turned around and said, ‘You’ve found your girl singer.’ We were all a bit shocked. I mean, we knew Kristyn could sing, but we never planned on being in a band together. Then I thought, Well, most of the songs are about you anyway, so it kind of makes sense!” 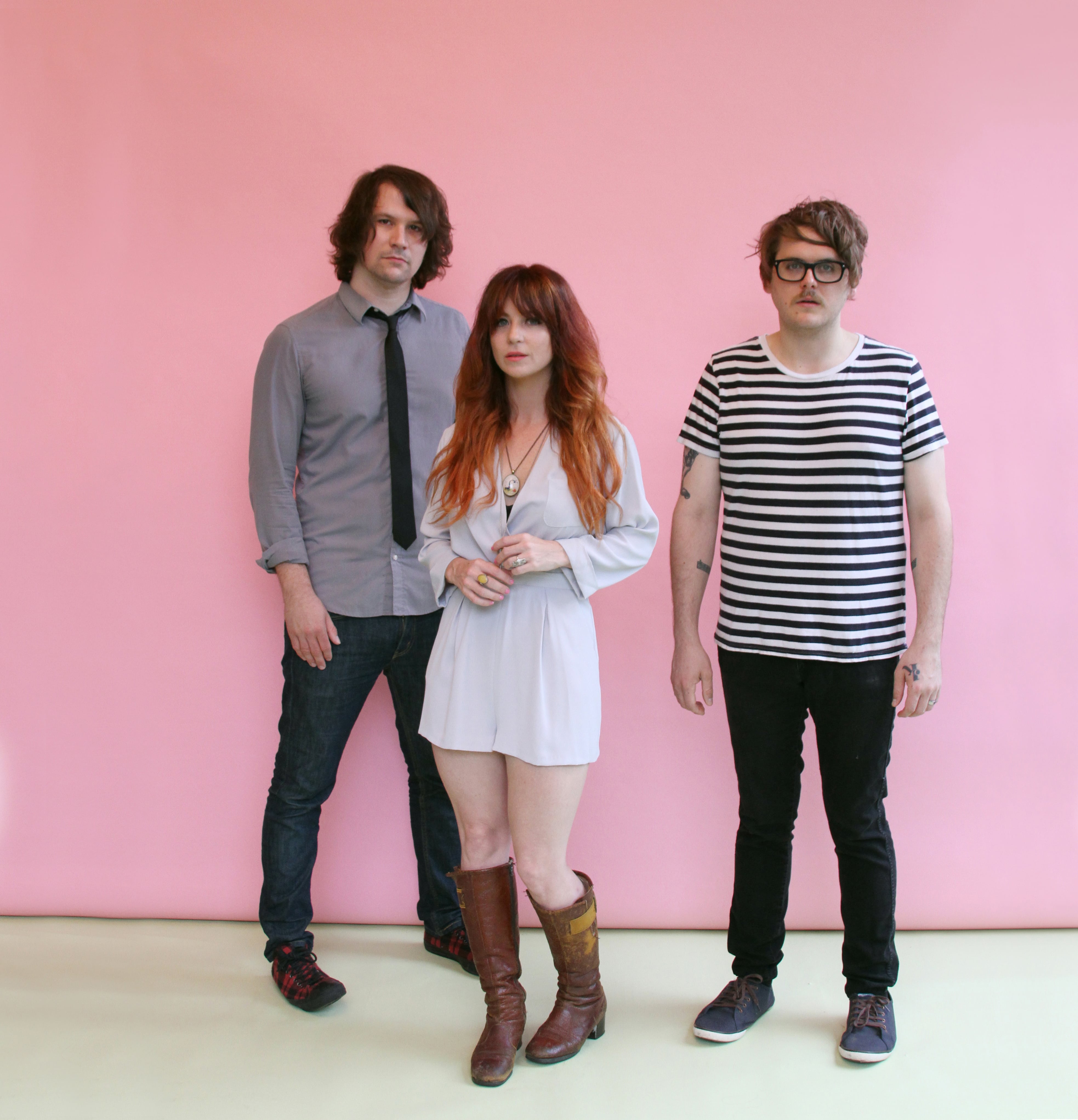 These first songs ended up being recorded in the basement of the Corders’ house and became the band’s debut, Bad Latitude, released March 2014. It’s an upbeat album all about love, with poppy, high-octane songs like “Not the One,” which still gets frequent airplay on Lightning 100, and simple surf rock anthems like the band’s first-ever single, “12345678.”

Bad Latitude put *repeat repeat on the map in Nashville not only because of the attention it got from Lightning 100, but also because of the hard work and planning that went into the project. “This is the only band I’ve been in that has built every year just the way we’ve wanted it to,” Andy says. “It’s great because every time something good happens to this band, it kind of erases something bad from the old days with other bands.”

Jared cites one particularly good night in Washington, DC, a few months back when around sixty people showed just to see them. Some of them had driven two hours. It’s shows like these that encourage the band to keep touring and growing the way they are. Their two single releases in anticipation of Floral Canyon—“Mostly” in May 2015 and “Plugged In” in March—show the members’ maturing sonic disposition, which invites their fans to a heavier, headier soundscape.

“I allowed myself to touch on more themes writing the songs for the new album,” Jared says. “There’s more stuff in there, you know? We like the sexiness with the darkness. We like the punchiness. We like the maturity. Floral Canyon is making way for that, and I think it’s good.”

If *repeat repeat really is a family business, the kids are growing up.