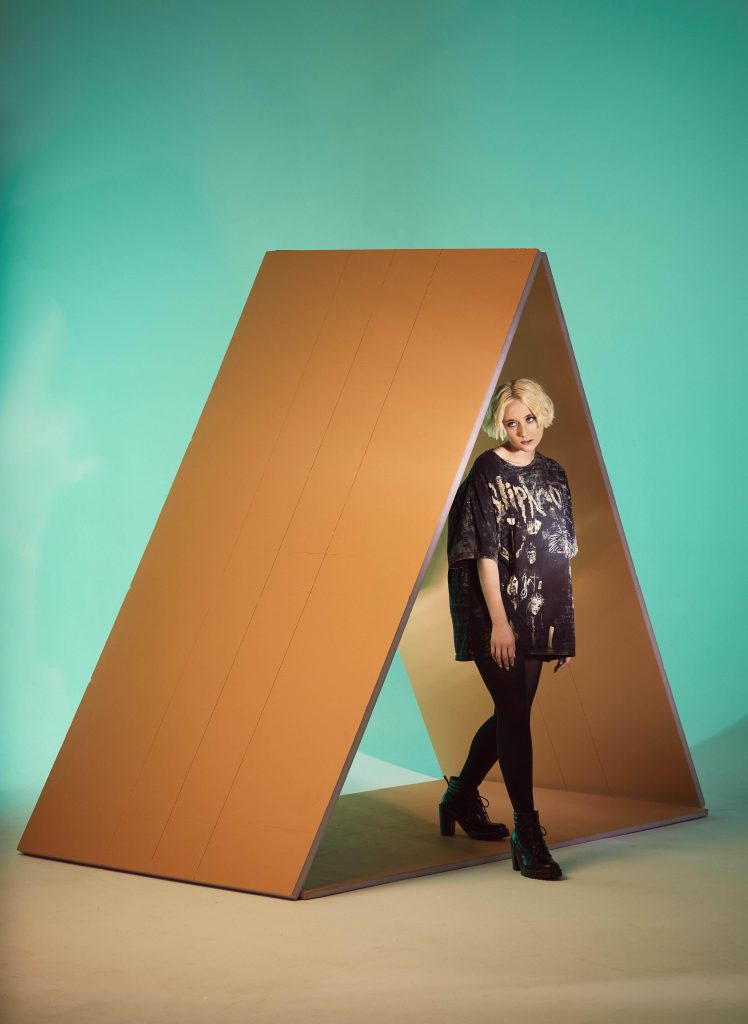 “The horse is too far out of the barn” is a phrase Jessica Lea Mayfield likes to say. She picked it up from a friend, and in short, it means that a situation has gotten too unruly, too chaotic, to restore any kind of order. To use another, more common expression: once Pandora’s box has been opened, there’s no closing it.

“That really helped me kind of think about it from that way too,” Mayfield explains from the bed of a rental pickup truck in East Nashville. “Like, the horse is too far out of the barn, and these things have happened too many times. And to think that just because someone says they’re not going to happen anymore,” she pauses, looking at the ubiquitous cafe racers and Ubers that line Gallatin Pike every Friday night. “There’s only so long you can wait for someone to follow through.”

Over the past six months, Mayfield has been in what she calls a “whirlwind of insanity.” She recorded an album at New York’s famed Electric Lady Studios, separated from her husband, moved three times, lost a childhood friend, underwent shoulder surgery, and got in a near-fatal car wreck. A drunk driver fell asleep at the wheel and rear-ended her at sixty miles per hour, hence the rental pickup. The brain, neck, rib, knee, and hip injuries sustained from the crash forced her to cancel her October tour dates.

The horse is, without a shadow of a doubt, too far out of the barn. “I’m really a lot more comfortable now emotionally,” she reassures me. “But I’m not comfortable financially, so that’s difficult.

But difficult isn’t new for Mayfield.

“I’ve honestly had it kind of rough, and I definitely have lived differently than other people,” the twenty-eight-year-old says. “So, I have a different perspective on things, for sure.”

Mayfield has been a performer since the age of eight, when her family band, appropriately named One Way Rider, toured the country in a 1965 tour bus formerly owned by Bill Monroe, Ernest Tubb, and Kitty Wells (Monroe dubbed it the “Bluegrass Breakdown”). They eventually relocated from Ohio to Tennessee, where they’d play four shows a day, seven days a week (when they weren’t touring, that is). During this time, Mayfield became part of the act, and she even began writing her own folky, Hank Williams–inspired songs. At fifteen, she released her debut EP, White Lies, which caught the attention of fellow Tennessee-by-way-of-Ohio resident Dan Auerbach. Auerbach reached out to Mayfield via MySpace (this was 2006, after all), and the pair recorded 2008’s With Blasphemy So Heartfelt and 2011’s Tell Me. 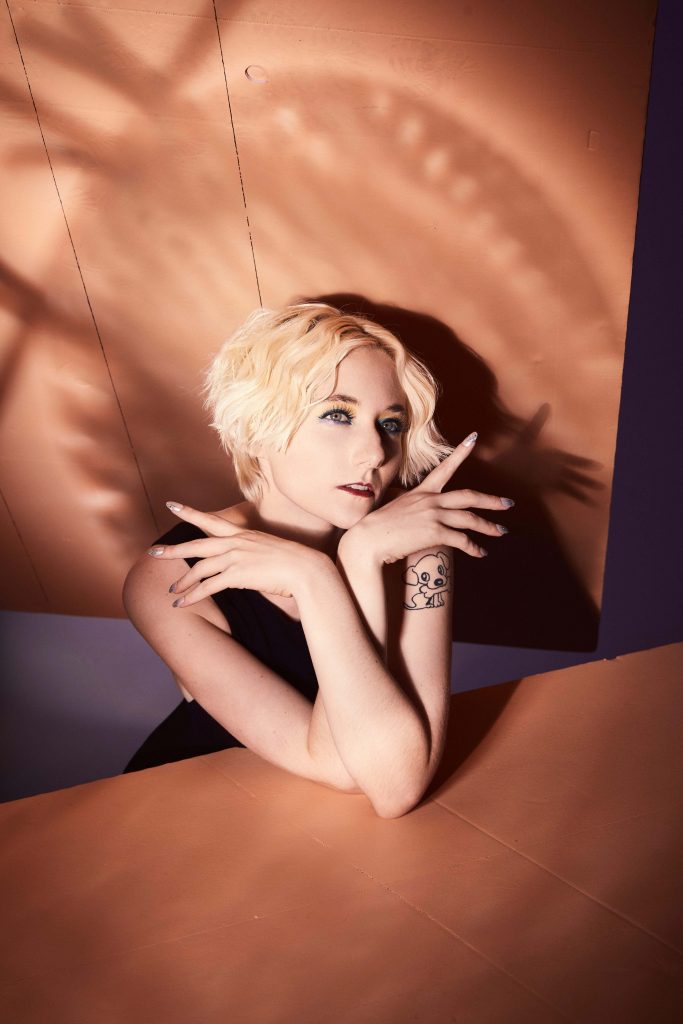 This narrative—young woman tours with family band, writes folk songs beyond her years, has records produced by big rock star—came to define (and to an extent, still defines) Mayfield’s career. It also became a convenient way for the press and fans to pigeonhole her. A mythos started to develop—one that was largely based around her being, as Mayfield aptly put it in a 2014 interview, a young, female “cartoon character.”

“Everyone made such a big deal about me being a child that it was part of my identity,” she tells me. “And then suddenly, I’m an adult and my age is no longer impressive or something—and I hated that anyways. Every time I would read something in an article, someone would be like, ‘She’s only seventeen!’ I would be like, ‘Why do they have to talk about my age? Like, why can’t they just talk about what I’m doing?’”

They started talking about what she was doing, and just what she was doing, in 2014, when she released Make My Head Sing . . . In every way—lyrically, sonically, vocally—the album was a drastic departure from her three previous efforts. Co-produced by Mayfield’s now-estranged husband, Head Sing was more akin to Stone Temple Pilots (“They’re my all-time favorite band—Dean DeLeo is my guitar hero,” she later tells me) than Ernest Tubb. The guitars are loud and raucous, verging on Thurston Moore or Kevin Shields territory, and the lyrics are Scott Weiland–level bleak: “Party drugs just make my head sing / You and me are a pack of dogs / I will fight, and I will conquer / I will be the most fucked up.” 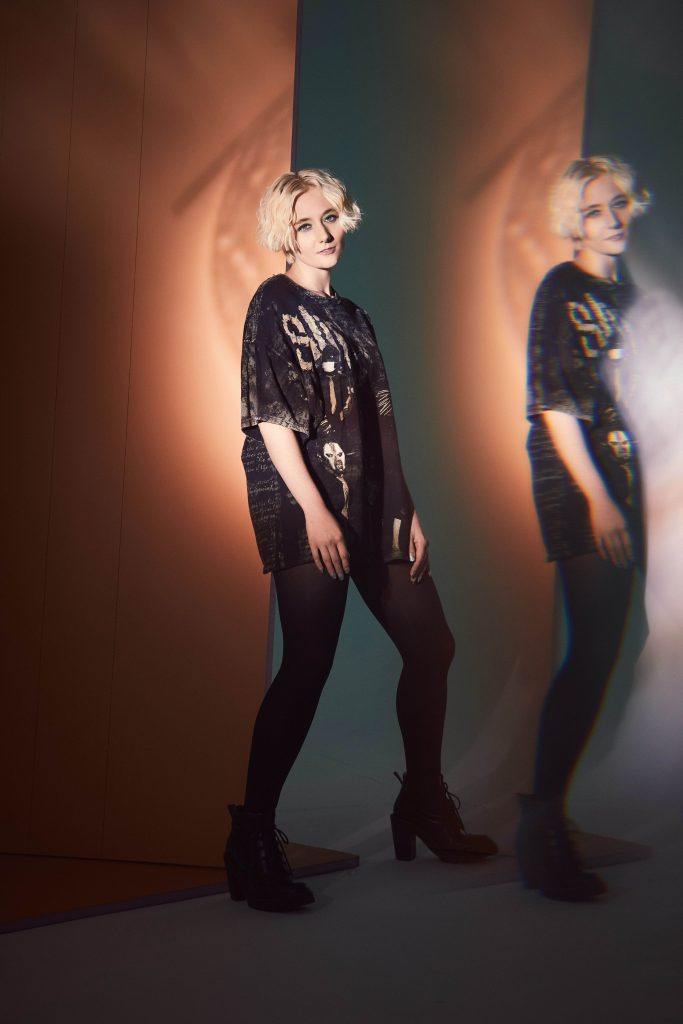 There was good reason for the dire tone. The record, the cover of which fittingly shows a woman being silenced by an ominous hand extending from outside the frame, was made during a period of intense personal crisis. Mayfield’s relationship with her spouse had turned abusive, she tells me, and she felt powerless and—quite literally—voiceless. Not only was she unable to address the situation in the album’s lyrics, but she also couldn’t bring herself to sing the way she had on previous albums. The lilting phrasing of Tell Me gave way to a haunting deadpan, accentuated by screeches and feedback from her guitar.

“I wasn’t able to talk about how I was feeling or what was happening, and that’s why it’s my guitar album,” she explains. “For me it was like I was speaking through my guitar. And then when the album was done, it was so heavy. I realized, well, it makes sense because my life is so heavy.”

And it only got heavier. Mayfield says the abuse continued after the album’s release, and to make matters worse, the eating disorder she’d struggled with her whole life returned.

“I got to a point where I purposefully not only tried to starve myself to death, but I also tried to deprive myself of nutrients,” she says. “I thought, Okay, this is my protest against what [is] happening in my life. I don’t know how I’m going to get out of this. I feel like I’m trapped. And I was like, you know what? I’ll just keep going as long as I can, and I’ll keep playing music and I’ll keep touring and then I’ll just die.”

She found solace and agency in the songs she was writing, the bulk of which appear on Sorry Is Gone, her latest full length. Whereas Head Sing addressed her pain through textures and soundscapes created with her pedalboard, Sorry Is Gone addresses it directly with language. The lyrics are somehow heartbreaking, unsettling, funny, and detached all at once, and the melodies find a sweet spot between Head Sing’s pseudo-spoken-word and her previous albums’ straight-ahead hooks. 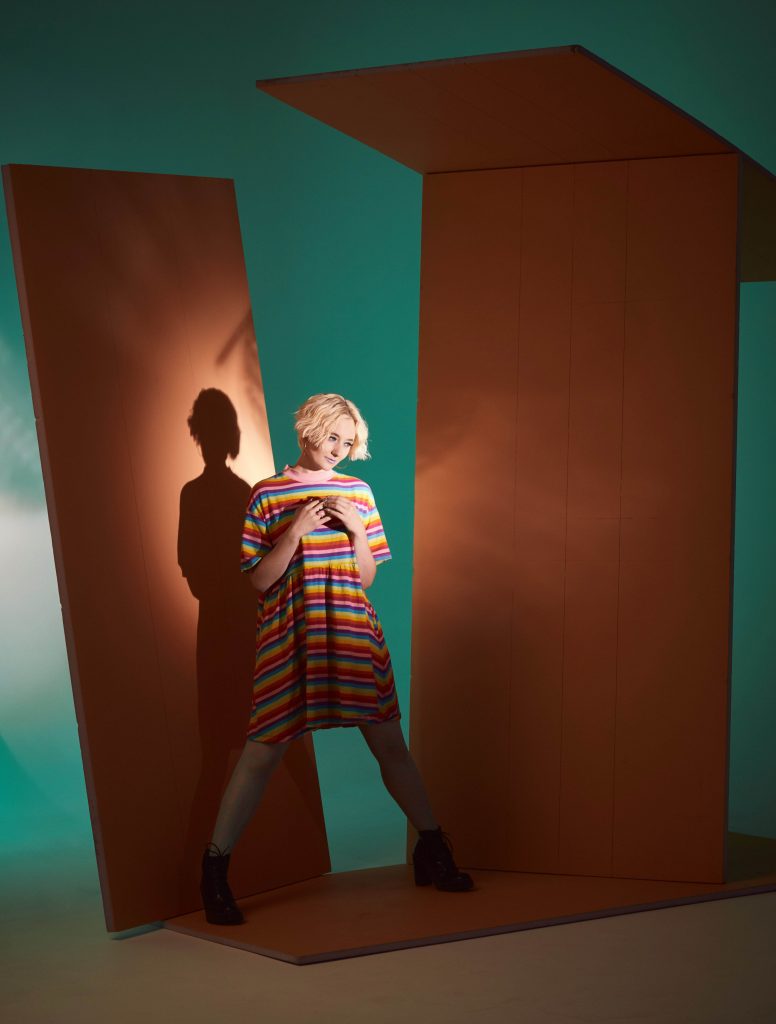 But for all of its examination of abuse, relationships, and the power dynamics that emerge in those relationships, Sorry Is Gone is not a chest-beating, fuck-you breakup album. It’s nuanced, complex, and even terrifying in its ambiguity. There aren’t any winners and losers here, just a broken narrator attempting to make sense of the madness around—and within—her. As Mayfield sings on standout single “Meadow”: “The devil’s in the details / Should have left them all out / The devil’s in my head now / He fills me full of doubt.”

This kind of uncertainty serves as the thematic backbone of Sorry Is Gone, and if it seems messy, that’s because Mayfield’s life was (and continues to be) messy—even post-breakup. She’s in the process of separating from her husband, but it’s not final yet. She’s moved out, but she still has a mortgage on her house. She wants to speak out more, to advocate for others, but there are legal issues at hand (she did, however, write a startlingly brave Instagram post about domestic abuse back in July). She loved her husband, but she was scared of her husband. She wanted to leave, but she wanted to stay.

“It’s not as black and white as people want it to be who haven’t gone through it,” she explains. “And they say, ‘Well, why did you stay this long, or why did this happen?’ And it’s like, well, if you were in this situation, you’d realize that there is hope, there’s love, you know? You love somebody, you want to protect them. You have the hope that they’re not going to be a certain way anymore . . . And it will never make sense. If you try to make sense of why these things happen, you’ll go insane.”

Much of Sorry Is Gone deals with this insanity. It explores the feeling that comes from trying to impose reason on an inherently unreasonable situation—or, to use an example from earlier, attempting to put the horse back in the barn. In the process, Mayfield proposes chilling, unanswerable questions. “Any tips on how to feel more human? / Or how to un-dehumanize someone?” she asks on “Safe 2 Connect 2”; or “Bruises heal and your mind can change / Can we convince ourselves we’re not what we need?” on “Maybe Whatever.”

"If you try to make sense of why these things happen, you’ll go insane.”

The album’s sound drives home this eerie balance between disbelief and detachment. With the help of producer John Agnello (Sonic Youth, Kurt Vile, Dinosaur Jr.), Seth Avett (Mayfield released an Elliott Smith tribute album with him in 2015), drummer Steve Shelley (Sonic Youth, Sun Kil Moon), bassist and vocalist Emil Amos (Holy Sons), and guitarist Cameron Deyell (Sia, Streets of Laredo), Mayfield’s songs transform into wide-open, otherworldly, and often hellish walls of sound. It’s spacey, but in an I’m-dissociating-from-reality sort of way, not a whoa-trippy-dude sort of way. The Flaming Lips this is not. The grim wash of tracks like “Soaked Through” or “WTF” (which stands for “White Trash Fighting”) can illicit feelings of vague dread and helplessness, like you’re a ghost watching your physical body suffer trauma. And that’s the point: sometimes checking out is easier than facing reality.

“For years of my life it felt like I would talk to my friends and be like, ‘I feel like I’m dead. I feel like a ghost. I feel like I’m watching my own life,’” Mayfield says. “I definitely think that was my coping mechanism. Because it took me a long time to leave this bad situation . . . In order to leave it, I had to admit what it was.”

This admission—and the catharsis that comes with it—brings hope to Sorry Is Gone, an album so emotionally raw that it can often be tough to digest. For every line like, “My lonely hell is waiting for me . . . I’m soaked through and I’m disintegrating,” there are looks into hard-won autonomy and independence. 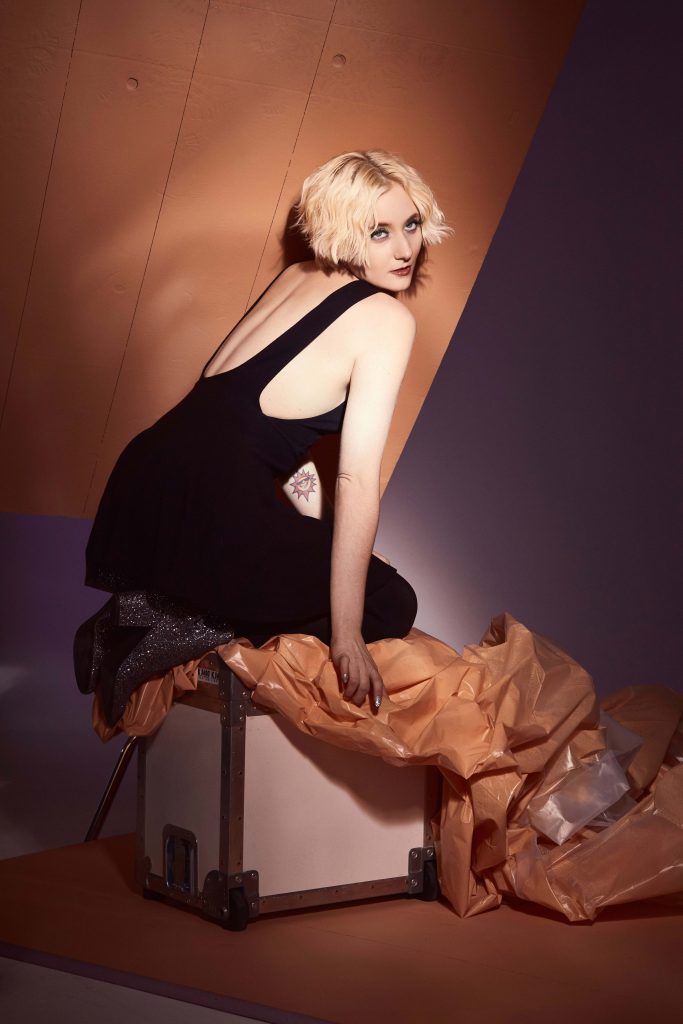 Take the title track, for example. You could initially mistake it for a breakup song, and in a way it is. There are lines about forgiveness, half-assed empathy, and “getting rid” of a significant other. But by the chorus—“I deserve to occupy this space / Without feeling like I don’t belong / I’m done excusing myself / I’m sorry, I’m sorry, but sorry is gone”—you realize Mayfield is actually breaking up with meekness, with the idea that her physical presence is something to apologize for.

“I was the biggest apologizer ever—I felt bad for just existing. And I was the kind of person who said sorry for no reason,” she says. “If someone came over and stepped on me, I would be like, ‘I’m sorry!’ And it’s like, why? . . . And I’ll still do it sometimes, and I have people remind me of it. They’ll be like, ‘Hey, you’re not apologizing anymore!’”

It’s moments like the title track’s chorus; or the defiant, cowbell-tinged chorus on “Off My Hands” (a song that’s so JLM-y it’s hard to believe it was written by The Mynabirds’ Patrick Damphier); or the bittersweet acceptance in “Bum Me Out,”  that make Sorry Is Gone soar. They aren’t exactly happy endings, and they don’t answer all of the questions the album raises. But that’s what makes it so brilliant: regardless of whether you have all the answers, you deserve to be given a fair shake. You deserve to be you. 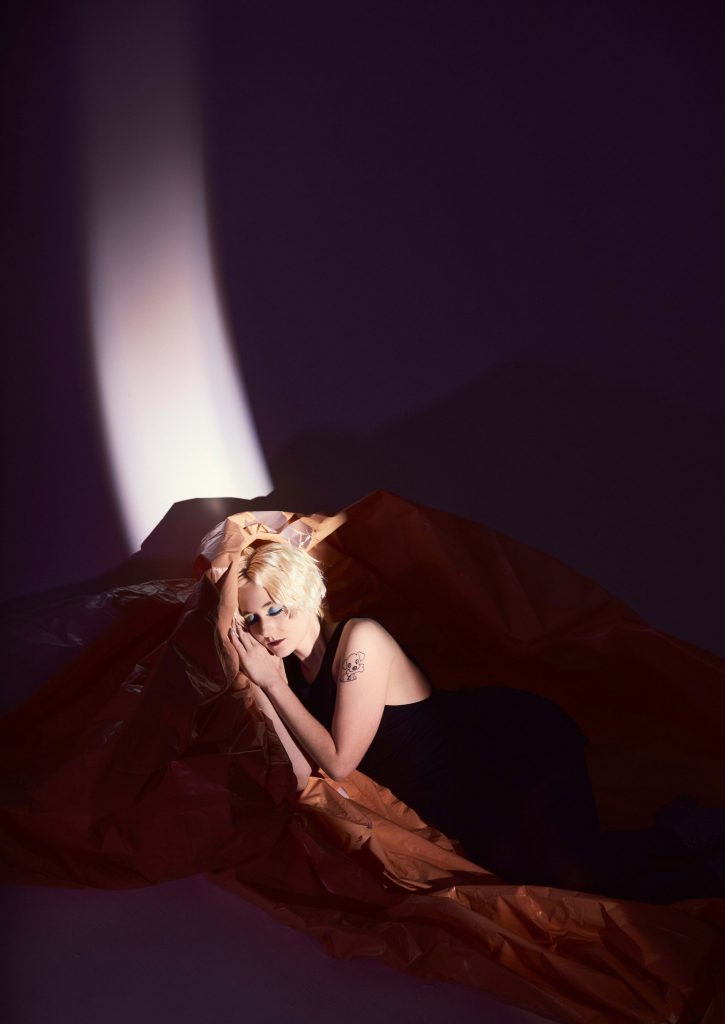 Sorry is Gone is available now, and Jessica Lea Mayfield is on tour now through February 10.