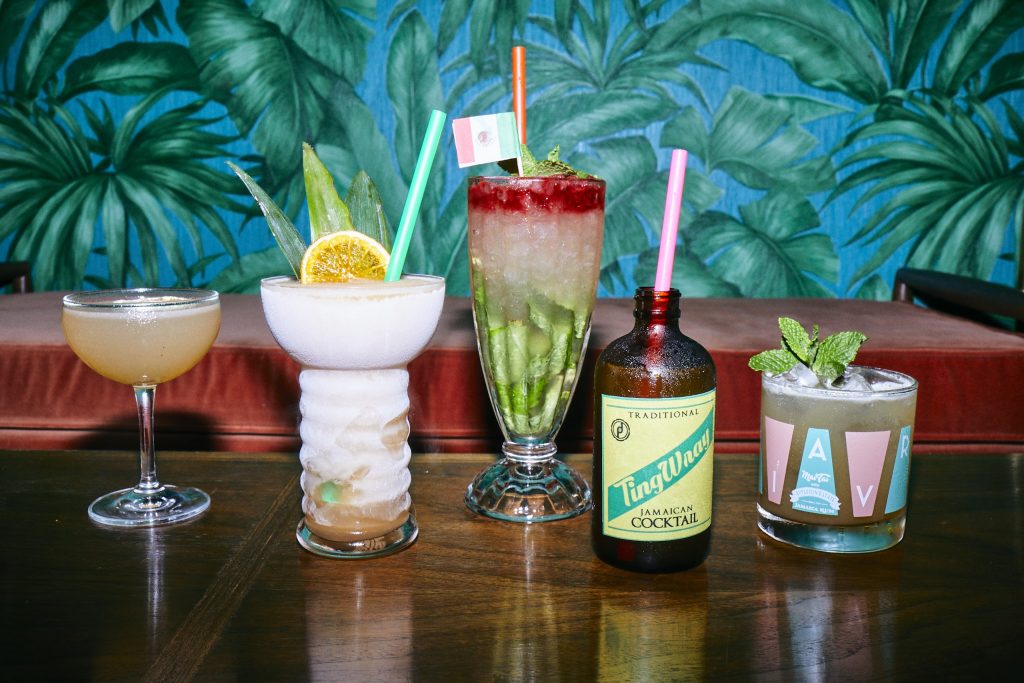 How sweet a thought, that travel can be an escape. For a week, maybe ten days, you can conceive of a new life. You can, as Paul Theroux wrote, “fall in love, have little children under the palm trees.” It feels so good to believe that it’ll all be different, now that home is so far away.

But travel as only escape—favoring ease over discovery—is, to quote another torchbearer of experiencing the world, Anthony Bourdain, like being in “hermetically sealed popemobiles through the rural provinces of France, Mexico, and the Far East, eating only in Hard Rock Cafes and McDonald’s.” My point (and Bourdain’s, I think): treating real places—places where real people actually live and work and fall in love—like overgrown amusement parks defeats the purpose of travel. You have to go in with courage, manners, a fearless stomach, and an open palm. Humility is mandatory; respect is imperative.

Luckily, East Nashville’s Pearl Diver exemplifies this approach. In a world without Bourdain, where it can feel embarrassing to travel abroad as an American, Pearl Diver is what it looks like when you get out there, respect what you find, and bring the love back home. 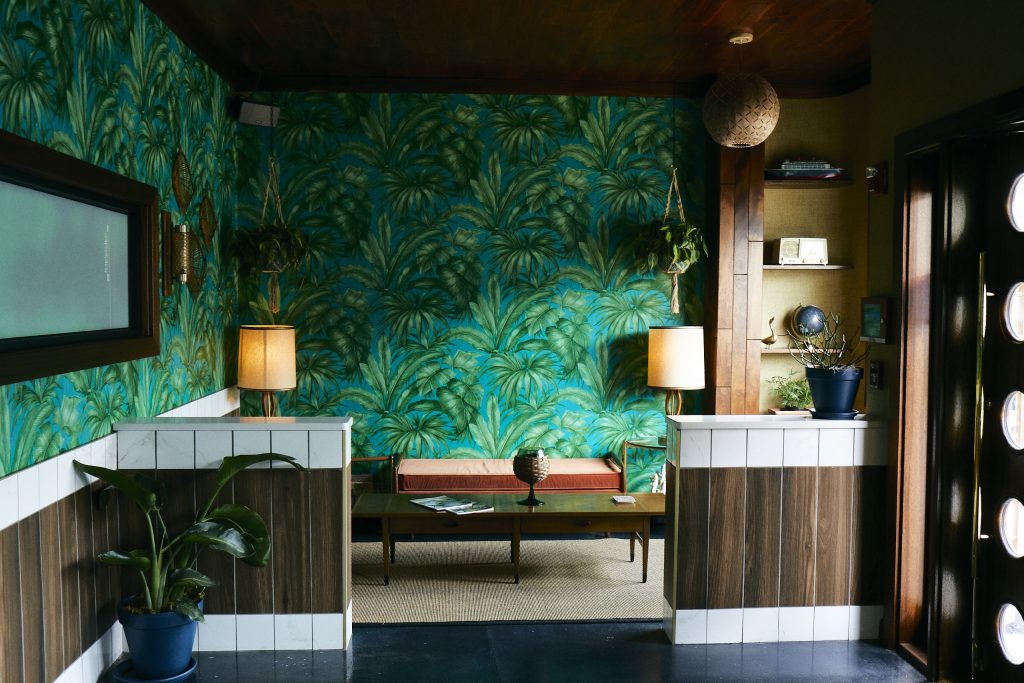 It’s also what happens when four of Nashville’s hospitality veterans—Ben Clemons and Jamie White of No. 308, and Matt Spicher and Corey Ladd of The Treehouse—turn inward and ask each other what’s possible from a bar, rather than looking to see what’s popping up in New York and L.A. and replicating it here because that’s hot and that’s what people want.

This probably needs to be said: Pearl Diver is not a tiki bar. You’ll find no ooga-booga porcelain glasses that look like something Indiana Jones nearly got himself killed trying to steal. There are no spectacles of dry ice, no bamboo partitions or sea grasses, no rope nets hanging from the ceiling.

The project did, however, grow from a tiki seed. Three years ago, Clemons transformed 308’s typically slow Tuesday evenings into Tiki Tuesday. “Everyone was super happy because they were just drinking rum,” he says. “No one was drinking whiskey, none of this combative thing.” The next week, they did it again and went for decorations, even laying astroturf on the bar. 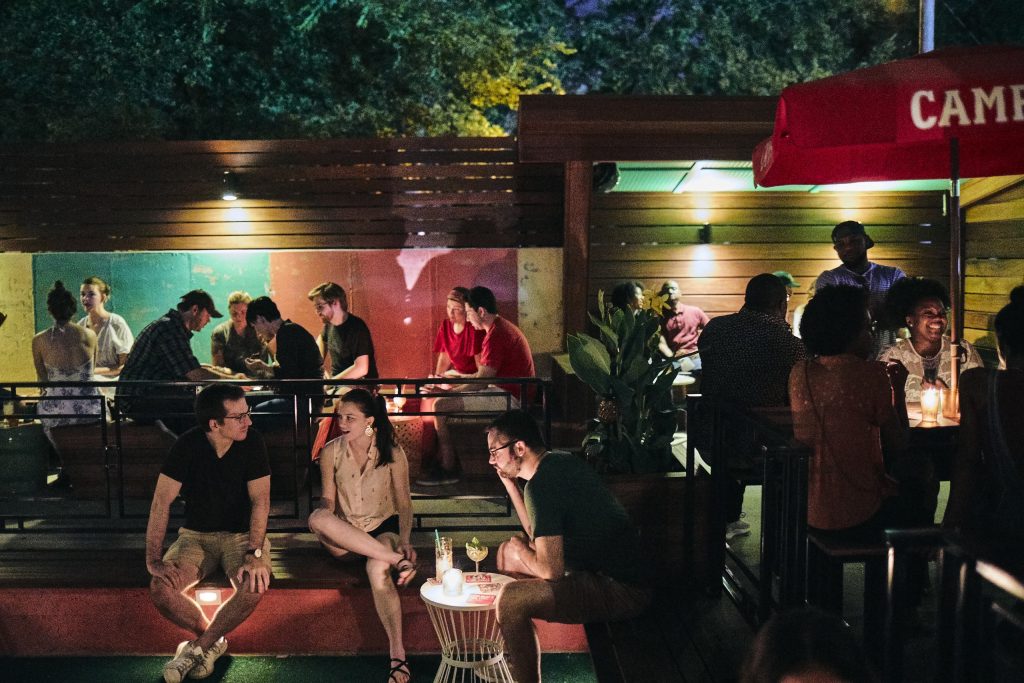 But two years ago, when the four guys initially started asking what their new venture could be, they found themselves considering some important questions: Do we want to participate in something as trendy as tiki? How do we navigate a fad while striving for timelessness? Isn’t tiki a little racist?

As a result of these discussions (often held at the Donelson Strike and Spare), Pearl Diver conjures the vibe of a relaxed island lounge—slow pace, easy drinking, a deep breath—but with the sense that it will proudly weather the passing of time, as slowed down as that time is.

Three weeks after Pearl Diver’s grand opening, the four owners are sitting together in an expansive booth at their bar, the seats covered in seafoam green boat vinyl, the three-foot trophy for their bowling team (Tree-08) just over White’s shoulder. They refer to each other as brothers throughout our conversation, endlessly marveling at each other’s talents and honoring what each man has brought to the project. “We’ve all opened places,” Spicher says. “We could’ve all done this without each other. But it would’ve been nothing like what it is when you get four guys together that care. We care a lot.” 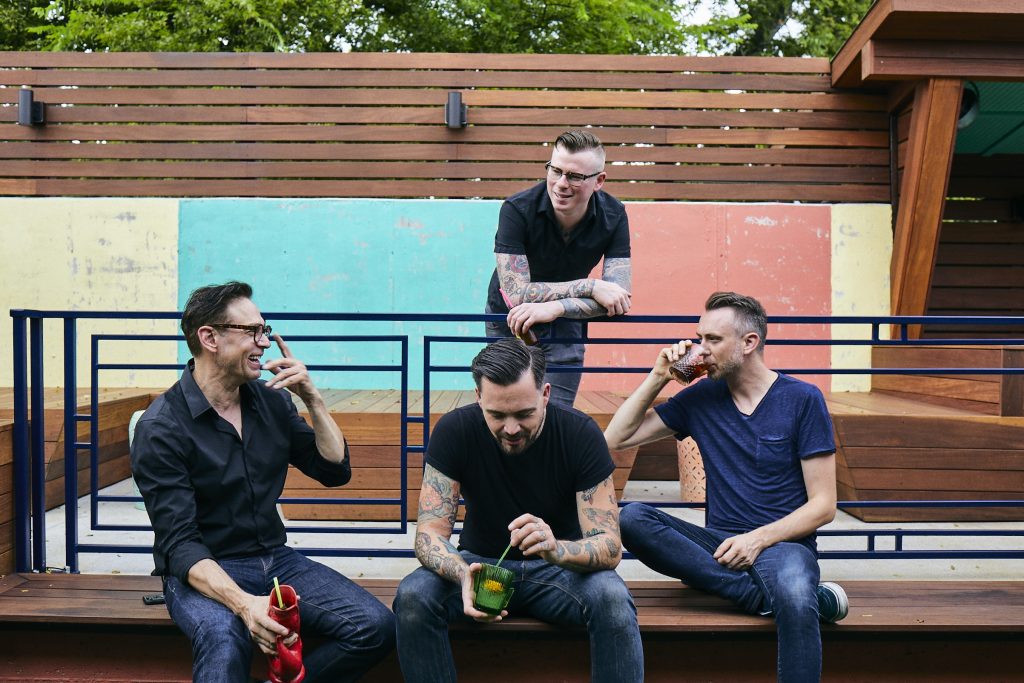 Spicher, the oldest, pegs himself as the leader: “I’m always the kind that says, ‘Let’s debate, let’s vote on that.’ Trying to be collective, judicious, democratic about this.” He’s been in the music business for about twenty-five years, as everything from an artist manager to a guitarist, and the other guys speak of his perfectionism toward the bar’s sound setup with no small amount of awe.

Spicher calls Ladd his “appendage,” which we all giggle at because it’s a little gross, but it’s also a deeply tender statement. Ladd, who taps at his tablet throughout the conversation, is recognized as a worshipper of functionality. “How’s it going to stand the test of time?” he says. “How’s it going to actually flow and function? That was the only concern of mine. I trusted these other guys 100 percent to do what they did, which is make it beautiful.”

Clemons and White get a lot of the credit for the interior design, having cultivated a mid-century dream house of palm fronds, Brazilian teak cabanas, and candlelit nooks. At night, a projector overhead shows black-and-white surfer films. Even the hand dryers in the bathroom have style.

Each of the four guys has traveled extensively (Spicher has been to forty-two countries), and the lessons and love brought home are all over the bar. Ladd and White visited Japan together, where they stood in the street with yakitori (skewered meat grilled over charcoal), and that street-food accessibility informed the entire menu. “It’s accepting and falling in love with that culture no matter where you’re at,” Ladd says. “In a lot of ways, America is a very young country, and a lot of other cultures look at us as, in a sense, toddlers. We have to be able to bring part of that back with us, in order to incorporate that love and pay respect and homage to it.” 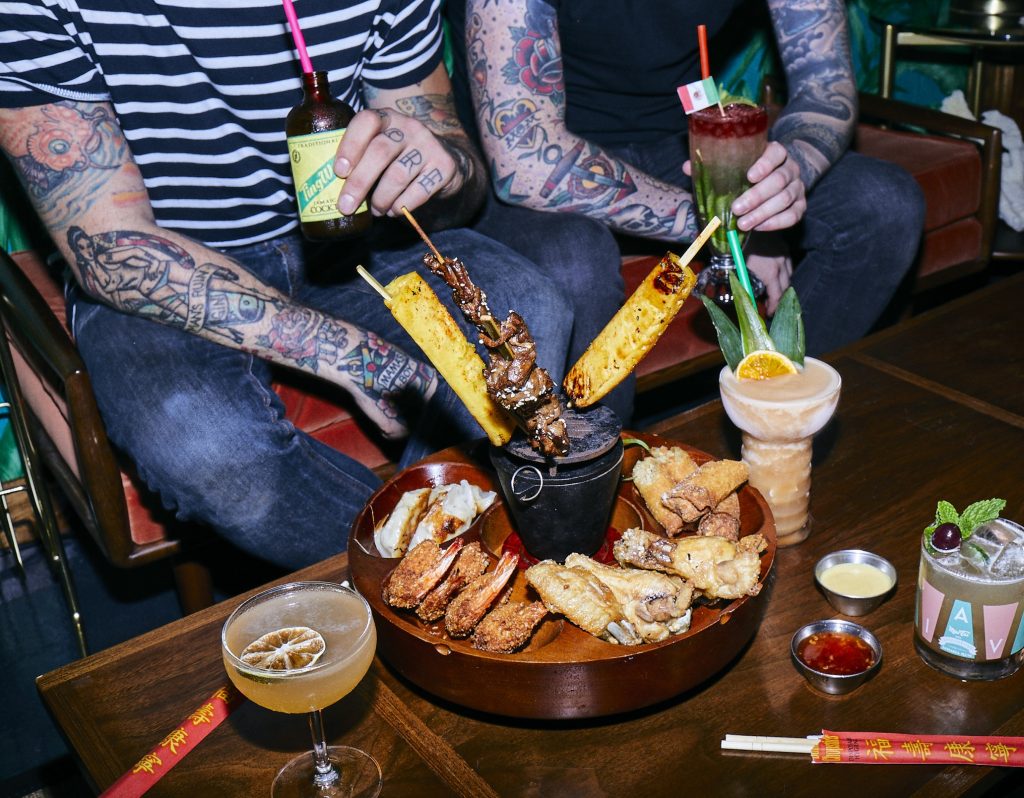 A few years ago, Clemons and White flew in a four-seater plane to Cuba, where they learned the right way to make daiquiris. The Pearl Diver bartenders juice their own sugar cane to make it exactly right, and the result is a tangy little sip from a coupe—just blended rum, pressed sugar cane, and lime.

“We didn’t want to do the American version of it,” White says. “They’re totally different drinks.”

Clemons scoffs: “‘Hemingway daiquiri.’ That’s not what Hemingway drank. We sat at the house where they have a statue of Hemingway, and the stool [where he sat], and we had those daiquiris and were like, ‘What the hell is everyone in America making?’”

For all their insistence than Pearl Diver isn’t tiki, it’s apparent that some of the traditions of tiki have come forward. Their menu includes a mai tai, which is a tiki creation (though their menu nods to the debate of the drink’s original recipe: Was it Vic Bergeron in ’44 or Don the Beachcomber in ’33?), and some of the drinks come with a bit of fire. But perhaps the best part of tiki, which also comes into play at Pearl Diver, is the tradition of reveling in an amalgamation of island flavors. Rum forms the heart of so many tropical cocktails, but this is no rum bar. White points out forty kinds of mezcal, “easy-drinking” beers, agave products (like sotol, which you can try in a smoky Las Curvas), and a huge selection of cachaça (“Probably one of the largest lists in the South,” White says), which is necessary for making the perfect caipirinha.

And just as the drinks jump from place to place, so does the food. “It’s island cuisine, just not all one island,” Spicher explains. From Treehouse chef Jason Zygmont comes a menu that island-hops from Japan to Cuba, the Caribbean, the South Pacific, and South America, with fish tacos, lo mein, wings, and oysters—and of course, the Cubano. 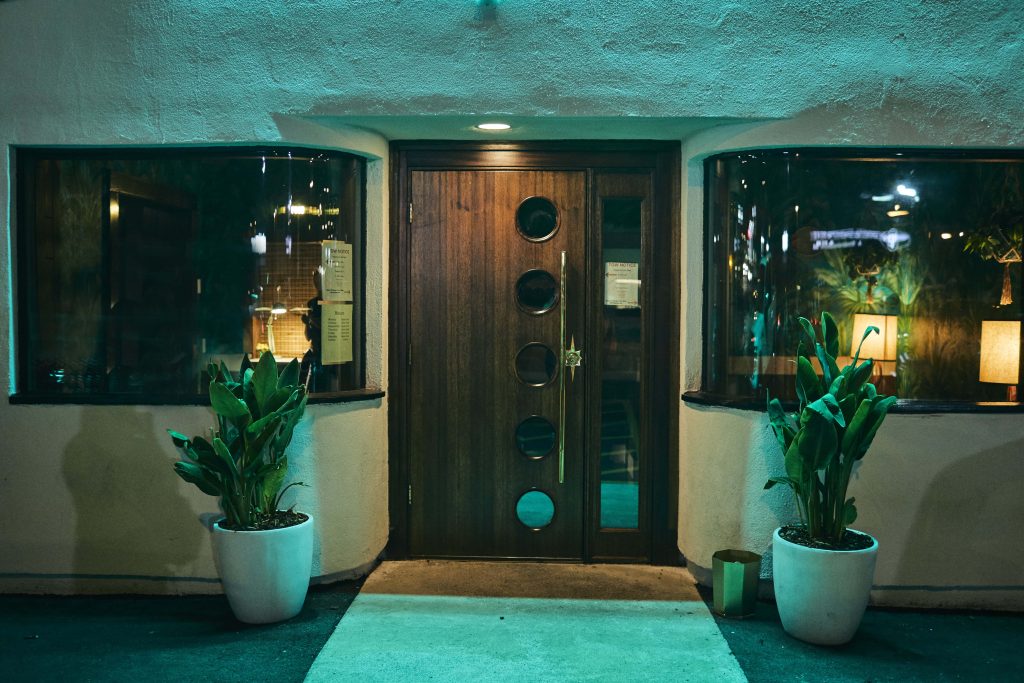 “We have the best Cubano in Nashville, pretty convinced of it, if not the larger region than that,” Spicher says. “But it’s only because [we fought] for what we knew was right. The first version of the Cubano, the second, just keep going and going until we get it right. The right mustard, the right bread.”

Clemons chimes in: “You don’t get a Cubano in Cuba, because they don’t have half of those ingredients. A Cubano was created in Miami for their [feeling of] missing Cuba. Ham and bread is what you get to live on in Cuba when you’re there. That sandwich is an emotional thing.”

Herein lies the heart of Pearl Diver—the thing that keeps it from being like one of those hermetically sealed popemobiles. The guys obviously can’t bring an island to you, but they’re not trying to; rather, they’re bringing that feeling, that emotion of being there, wherever there may be. There’s some travel memory here, held within the flavors. It may not be the sea, but it could be the sound of the sea. It is, as Clemons said about the Cubano, an emotional thing indeed.

Pearl Diver is open Monday through Saturday 6 p.m to 2 a.m.