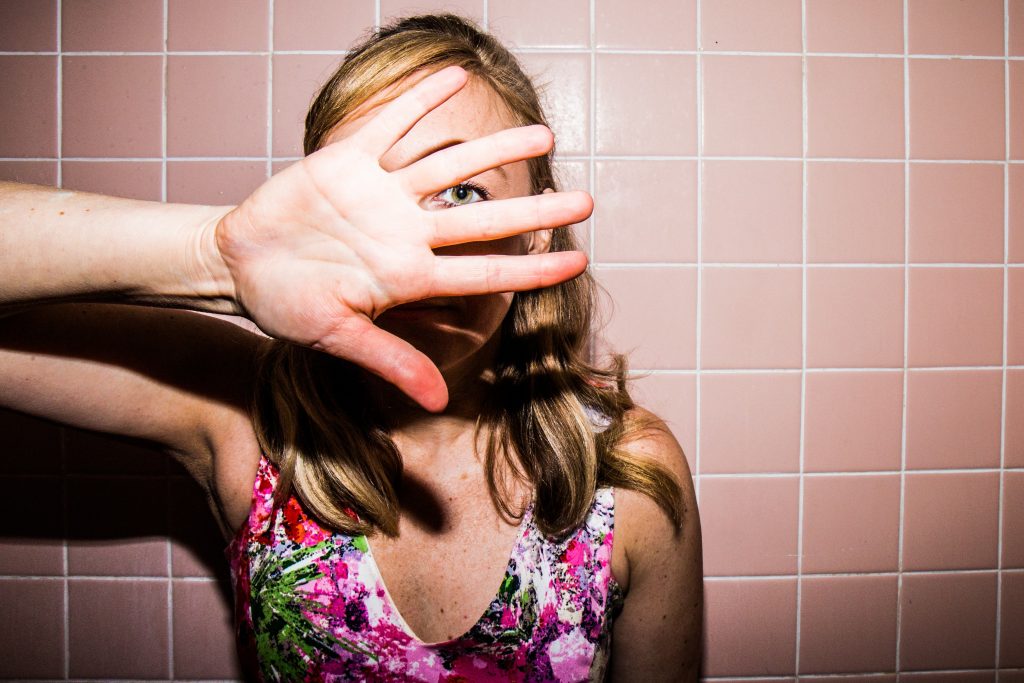 In a story, a person always has a reason for the things she does. By its very nature, a narrative can’t portray chaos. I’d been reading Nicole Krauss’ upcoming book, Forest Dark, before meeting with artist and David Lusk Gallery Director Amelia Briggs, and early in Krauss’ novel, she draws an impassable line: Narrative, the “antithesis of formlessness,” can sustain chaos no more than light can sustain darkness.

For Briggs, an artist obsessed with skewing and fragmenting narratives, chaos is always just at the edge of her vision. Pop culture, ads, and whatever other influential material—it’s all overwhelming stimuli that build each person’s narrative, and combined, they’re about as close to chaos as you can get. And it starts from birth: cartoons, comics, even the seemingly innocuous stories told in coloring books.

“One could argue that’s how we start to form our identity as children: what we’re exposed to as children, what becomes the norm, and what we’re used to seeing,” Briggs says. “I’m drawn to distorting that.” 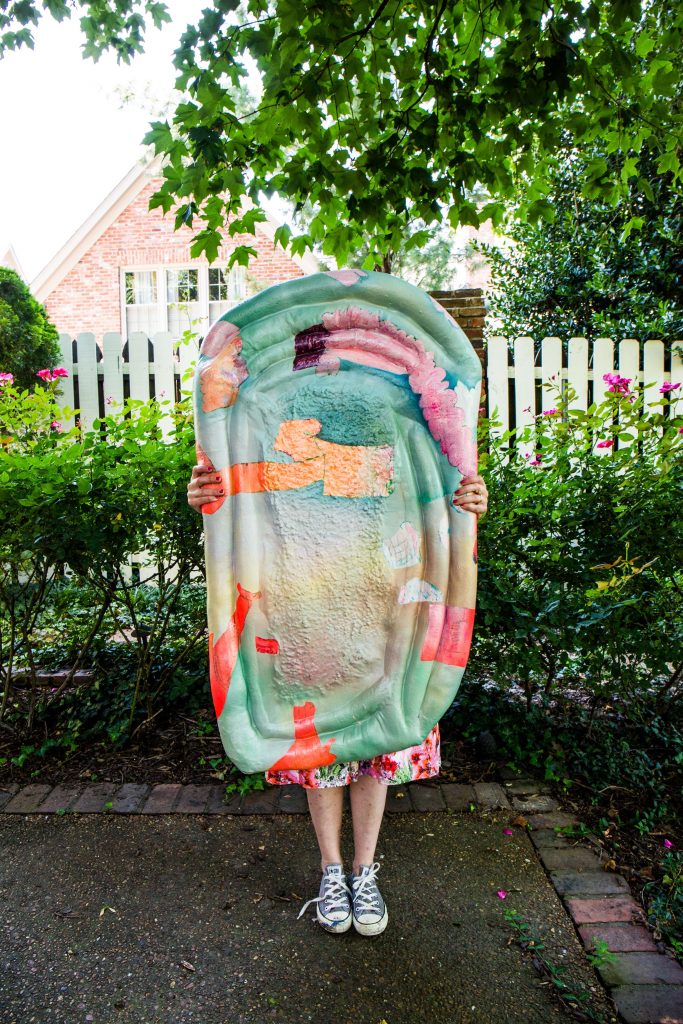 It’s the Fourth of July, and Briggs and I are sitting in her Green Hills home’s third bedroom, which she has converted into a small studio. Formerly of Indiana, Michigan, and then Memphis, she has only lived in Nashville (with her fiancé) for about nine months at this point. She recently took on the David Lusk directorship, though she worked for the Memphis gallery for four years, while she was in grad school. There’s paint on just about everything in her studio, chairs included, but she promises that my seat is dry. A selection of her Inflatables (which aren’t inflated at all) hang on the walls like cartoonish splats or squishy childhood memorabilia.

“I tend to think of cartoon or childlike language as a metaphor for building blocks of popular imagery, or imagery that we are constantly inundated with,” Briggs explains. “My fragmenting of this narrative is an attempt, in some way, to take control of the chaos, remove the messages. Rendering these shared visual narratives unreadable makes them more interesting to me because they no longer carry a message or ‘agenda.’ It is the ‘agenda’ I find exhausting or chaotic.”

Briggs’ exploration of these themes splits into two categories: her soft, sculptural Inflatables and the Small Green Plane print series. They combine to form we are not together yet, showing at Red Arrow Gallery from August 12 to September 3. The two series are intertwined, feeding and mimicking each other, pulling in equal measure from comics, coloring books, and cartoons.

Briggs shows me a fat binder (with a little paint on it) that’s spilling with vintage coloring book scraps. It’s mostly clippings from a Mickey and Minnie coloring book, all off-white pages with bold, swooping black lines. Briggs pulls out a few small pieces and shows the minute details that interest her. There’s a dotted detail in one corner—she says it’s beautiful, she has no idea why, and that she could frame it.

“I think it’s the graphic quality of these drawings,” Briggs says. “I’m very drawn to coloring books or cartoons because of the little subtlety, the simplicity [of] taking something very complex, or an idea that’s very complex, and making it really simple . . . A very simple line, we universally understand to represent something—a universal shape.” What’s the simplest design you can use to portray an image? Briggs gestures to a scrap with fluffy-looking squiggles on it and says that we all know that’s a tree. (It looks like a mop of hair to me, but I get her point.) 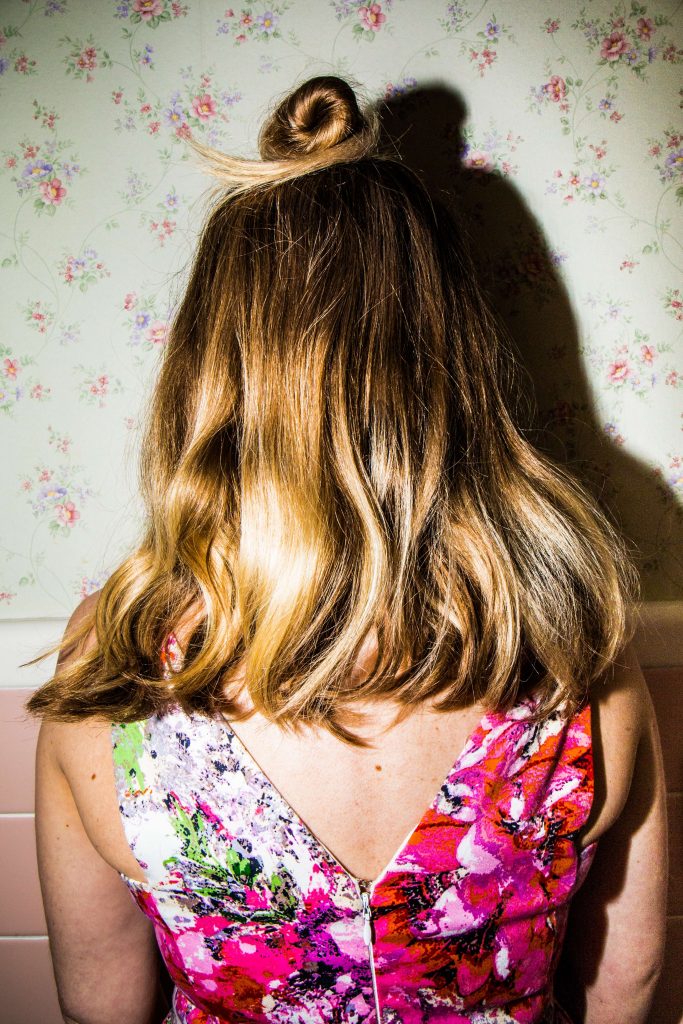 These marks may be immediately recognizable, even when cut up, but I dare you to trace any of Briggs’ work back to its cartoon or comic book source material. Even though Briggs and I are talking about Disney, I can’t really see any Disney in her pieces. Well, except maybe a set of eyes (Mickey?) in an inflatable hanging on the wall. Briggs acknowledges this and then points out a nose that’s too obvious to her, but I have no idea what she’s talking about. What nose?

The Small Green Plane series is comprised of prints on various fabrics, including satin, silk, and faille, and here the fleeting marks may suggest the existence of a figure or a scene, but just barely. Briggs doesn’t keep a sketchbook, so these digital prints function as sketches and precursors to the inflatables. The title is almost literal: “When I used to paint figures, I would always think about inserting a green plane to allude to the ground or grass,” Briggs says. “[The figures] were kind of walking a line between abstraction and representation.” Each piece in the Small Green Plane series is like a miniature stage or diorama with its own fractured mise-en-scène. Within these settings exists an autonomous reality, “one that has its own rules” but perhaps reflects our own reality.

All of this has roots in Briggs’ fascination with filmmaking (and specifically women in film). Her website even has a page that transforms the Small Green Plane images into GIFs. Rather than illuminating more of the figures within, these animations suggest infinite possibilities, more questions than answers.

By printing the Small Green Plane series onto fabric, Briggs gives each image the autonomy to become its own object. When I press her about the feminine nature of fabric, she concedes, reluctantly: “There’s a daintiness to fabric, which is very stereotypically feminine.” But she offers a qualifier to this: “I can’t honestly say that I’m thinking about that exact thing as I’m making these, because I’m not. I’m thinking about the process of just making a piece, and reacting intuitively to the shapes that I’m drawn to . . . But my work is not conceptual in the sense that I am going to speak to a stereotypical thing. It’s not that direct.”

"I do think of these pieces—or I think of my whole process, really, as a kind of search for identity."

That being said, as a female artist, to pull apart the chaotic narrative of comics and cartoons is to pull apart the messages for young girls, which even in sweet-seeming picture books can have sexist or manipulative messages. Minnie getting dolled up for Mickey may be a little thing, but is it that little? Or are we just accustomed to it? “I [think] a lot about a woman’s connection to emotion and a woman’s search for identity,” Briggs says. “I do think of these pieces—or I think of my whole process, really, as a kind of search for identity. Obviously I am a woman, so I associate that with a woman’s search for [identity].”

It’s this search that led to the title we are not together yet, referencing the manner in which we glom together some semblance of an identity while being inundated with external information from ads and pop culture. “I [like] to think about my work as these things that are kind of frustrated or not getting across who they are, what they want to say,” Briggs says. “I like the idea—even when I was painting figures—of someone or something searching for themselves or trying to express themselves, or maybe paintings that were somehow frustrated or somehow not able to get that across.”

The imagery of our childhood loses even more of its specificity in the Inflatables, deformed and stuffed (with stuffed-animal filler) 3-D canvases with layers upon layers of paint. Coloring book–style marks made with acrylic markers, stapled-down fabrics (fake fur, old Goodwill curtains), and paper-mache all disappear beneath faded, aged-looking paint. It’s loose, never projected, maybe even a little, dare I say, chaotic.

It may be easy to talk about the influences behind Briggs’ pieces, what she likes about them visually, her process of making them. What isn’t easy is talking about why. A viewer starts looking for an explanation—especially a woman like myself who grew up in the ’80s and ’90s and finds the colors and bulbous shapes to be particularly familiar. There’s something incredibly innocent about the perky pink and turquoise, but something worn down about the textures hidden beneath thick paint. I want to chew on these inflatables, see how they taste, put one in my mouth, like a baby—maybe that will give me some answers. (When I tell Briggs this, she laughs lightly and says, “Do it.”) But Briggs’ work is formal, very rarely conceptual, and it dodges comparison.

“I’ve made this mistake before with my work, where I’ve tried to force a narrative on it,” Briggs says. “There are a lot of concepts happening here that I’m thinking about, definitely . . . But there’s not some big concept that I’m thinking about when I’m making these. I like that about it though. I think I would be bored of it if I was trying to illustrate some specific and easily understandable agenda or narrative. Maybe not bored of it . . . but I’m not interested in that. I’m interested in it being a mystery even to myself.”

There’s so much left unsaid in Briggs’ work, but there’s just enough suggestion of a life, a narrative, and beneath it all, utter chaos.

we are not together yet is showing at Red Arrow Gallery from August 12 to September 3.