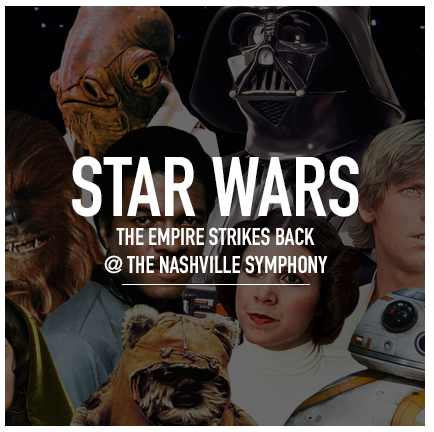 A long time ago, in a galaxy far, far away, America was fresh off a Bicentennial, Jimmy Carter was president, and a guy named George Lucas sought to legitimize sci-fi through a movie about a kid on a desert. Over forty years later, the Nashville Symphony celebrated that film—now known as A New Hope, then known simply as Star Wars—by performing John Williams’ iconic score live alongside a screening.

This weekend, they’re back to perform the entire Star Wars: The Empire Strikes Back score. Starting this Thursday, March 14, and running through the weekend, join the Nashville Symphony at Schermerhorn Symphony Center as they perform what we all know and recognize as the best Star Wars film (this isn’t up for debate). Tickets are selling fast, so grab yours here now!