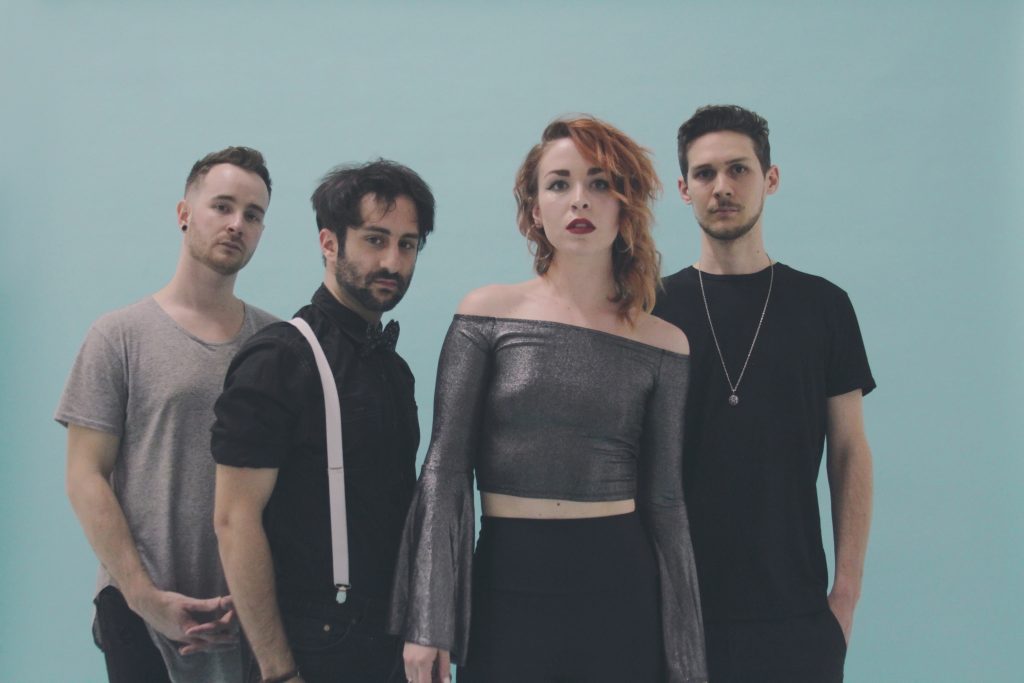 It’s not that kinetic, back-alley pop foursome The Foxies want to put themselves in a box with novel descriptions for their sound. It’s just that they’re really good at coming up with them.

Feeding off the shag-carpeted schmaltz of the new-wave era but fusing it with the irresistible energy of EDM, they’re creating something that is both nostalgic and fresh—and it’s a sound that demands an honorary title of its own.

“We’ve been coining this term ‘future ’80s’ as a genre,” says guitarist Jake Ohlbaum, sharing laughs and drinks with the band in a suitably retro Eastside lounge.

“The thing I like to say is it’s like if Billy Idol and Blondie had a baby,” front woman Julia Lauren Bullock adds, tossing back her flame-colored hair and a baby shot of bourbon in quick succession.

She’s right, but the old-made-new undertones go even deeper. Bullock sings with a playful vocal edge that recalls Cyndi Lauper, she exudes the magnetic sexuality of Madonna, and she leads frantic live shows like a female Freddie Mercury. For their part, the band (comprised of Ohlbaum, drummer Rob Bodley, and bassist Kyle Talbots) lays down thick, deep-pocketed melodies as decadent as that gilded decade itself, but with an added dose of punk rock grit.

“It’s a grunge-dance situation . . . and she looks like David Bowie,” Ohlbaum concludes, cuing another round of laughs and nods of approval all around.

Whatever you call it, Nashville seems to dig it. 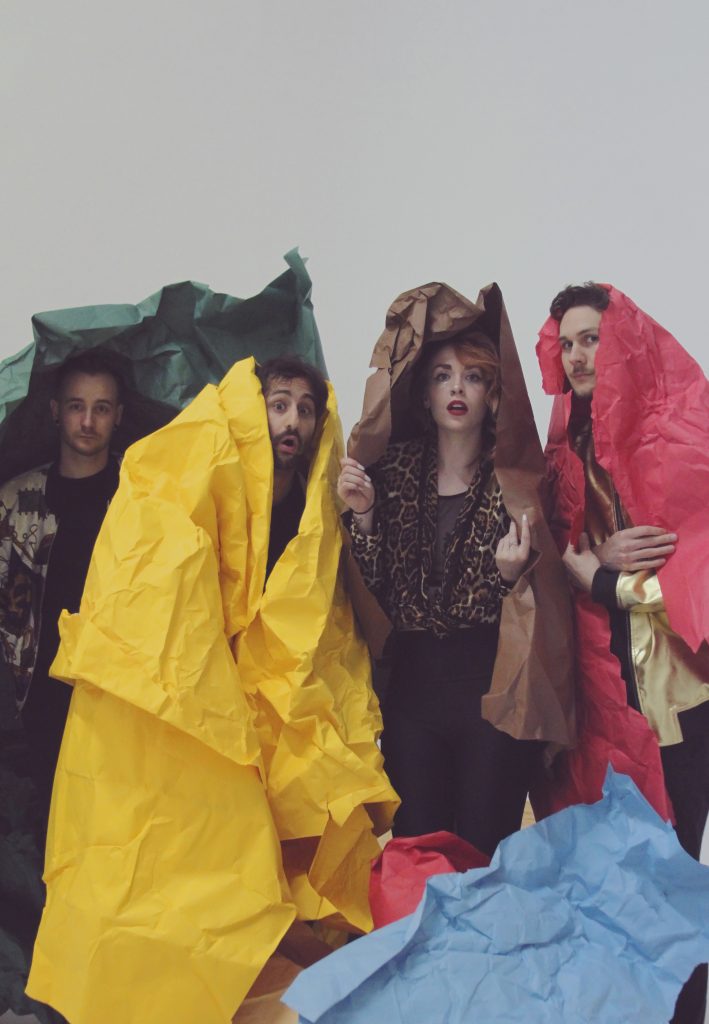 The Foxies’ first gig in Music City was barely two years ago at the tiny hardcore haunt The End, but lately they’ve been fixtures at The Basement East and recently opened a show for ’80s hit makers Berlin (“Take My Breath Away”) at Top Golf’s new venue, The Cowan.

They’ve won over independent radio with support from Lightning 100, and among other milestones were the champs of this year’s Road to Roo competition—beating out more than two hundred other bands for a spot on Bonnaroo’s 2018 lineup. “It was like, ‘If nobody else is gonna put us on Bonnaroo, we might as well fucking do it ourselves,’” Bullock cheekily decrees.

Originally inspired by bands like Joy Division, The Smiths, and The Cure, plus Bowie and mainstream Members-Only pop, The Foxies’ 2016 EP Oblivion felt at times like the soundtrack to a lost Brat Pack movie—which is to say, extremely satisfying for a child of the ’80s or ’90s. That project was recorded before the band’s current lineup coalesced, though, so their new music leans more into the “future” part of their genre.

“We’re entering this awesome phase of popular and alternative music where there’s no such thing as genre,” Ohlbaum says. “So here’s this band that’s electronic themed, but it’s a punk rock band onstage, and you’re not really quite sure what it’s supposed to be.”

With each member of the band contributing to writing, arranging, and recording, their April-released single “Be Afraid Boy” marks the start of a new chapter. Produced by Ohlbaum, it’s a sonic outlier compared to their previous work, featuring trance-like vocals, horns, blast beats, and a skittering, off-kilter club hook. But it’s not just the track’s sound that’s showing growth. “Be Afraid Boy” is also The Foxies’ first foray into social commentary—written years ago in Brooklyn, it echoes the #metoo movement’s message.
“A week prior to writing this tune, I was stalked on the subway by a man who basically looked like a reincarnation of Daniel Boone,” Bullock explains. “I got very uncomfortable and had to hop from train to train to lose this guy, and that was the first time that had ever happened to me. My alter ego wanted to stand up to him, but my actual self was very scared. So this song is basically by my alter ego saying, ‘You should be the one afraid of me, not the other way around.’”

"You should be the one afraid of me, not the other way around."

Filled with lyrics about the hunted turning the tables on the hunter—all sharp teeth and howling at the moon—Bullock’s bandmates say they’re proud of the track’s empowering message, and of her for refusing to let the experience go unnoticed.

“Even though we’ve seen female band leaders like Debbie Harry and Gwen Stefani in different time periods, female voices are still being oppressed,” says Bodley. “But now we live in a world where Julia can stand out and be a bigger voice and say all the things other women haven’t had a chance to say out loud.”

“I feel like the biggest thing for female artists back in Blondie or Fleetwood Mac’s time, they were so interesting to the mass public because they did not care and did not shut their mouths,” Bullock adds. 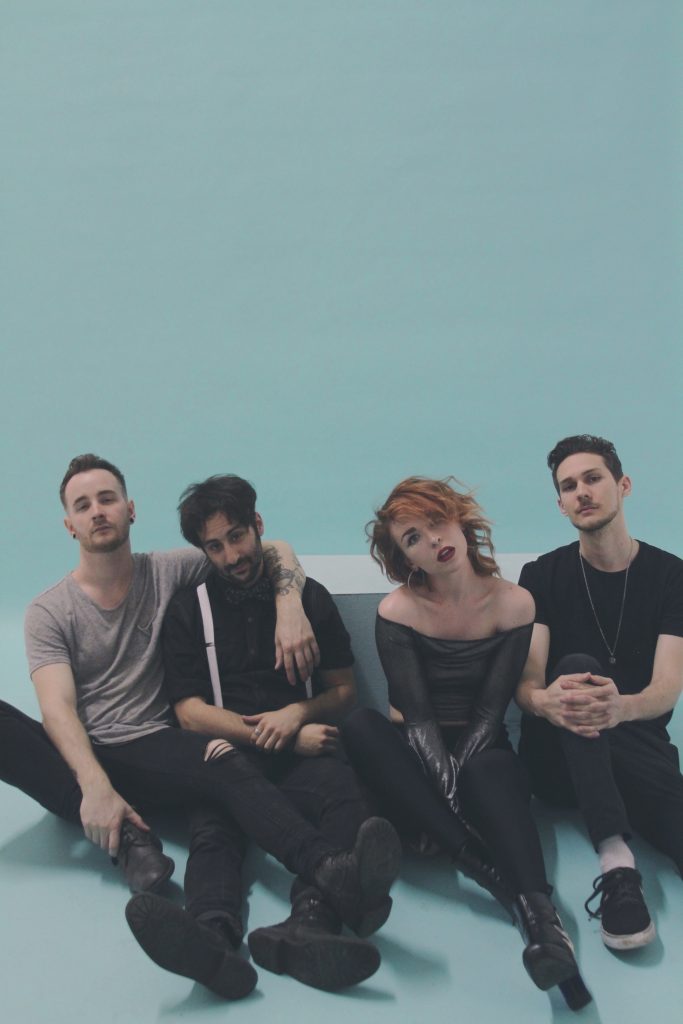 The Foxies aim to carry on that tradition of not shutting their mouths. And by opting out of a traditional album release in favor of a series of singles, fans will soon get more examples of Bullock’s fiery femininity. Sounding like the perfect start to an epic ’80s dance off, “Get Right” addresses a time in Bullock’s early twenties when she was bullied by a group of girls in a new city. She made the mistake of moving there and joining a friend group that included the girls’ boyfriends.

“It’s like, I totally ate shit, but that’s alright because I looked great doing it,” she says about the song’s take-me-as-I-come spirit. “It’s uplifting, but with very sarcastic tones.”

Others like “Chewing Gum” center on a heartbreaker’s feeble designs at patching up his destructive handiwork, and the propulsive power pop of “Room for Space” imagines a pair of star-crossed lovers as “moonbeams, just looking for a way out.” “There’s heartbreak songs, there’s stand-up-to-the-man songs, there’s I-don’t-give-a-fuck songs,” Bullock says with a joker’s grin.

But as cool as the recordings are—and they are convincingly cool—The Foxies are first and foremost a live band. Each track gets punched up a little, tightly arranged but often skewing more toward the organic, punk rock side of their sound as Bullock dances and writhes around the stage, losing herself in each moment completely.

Fans who found themselves at Bonnaroo’s Miller Lite stage earlier this month got a small taste of that action. Like some of her female rock heroes, the stage is Bullock’s safe place—the one spot where she’s in control. 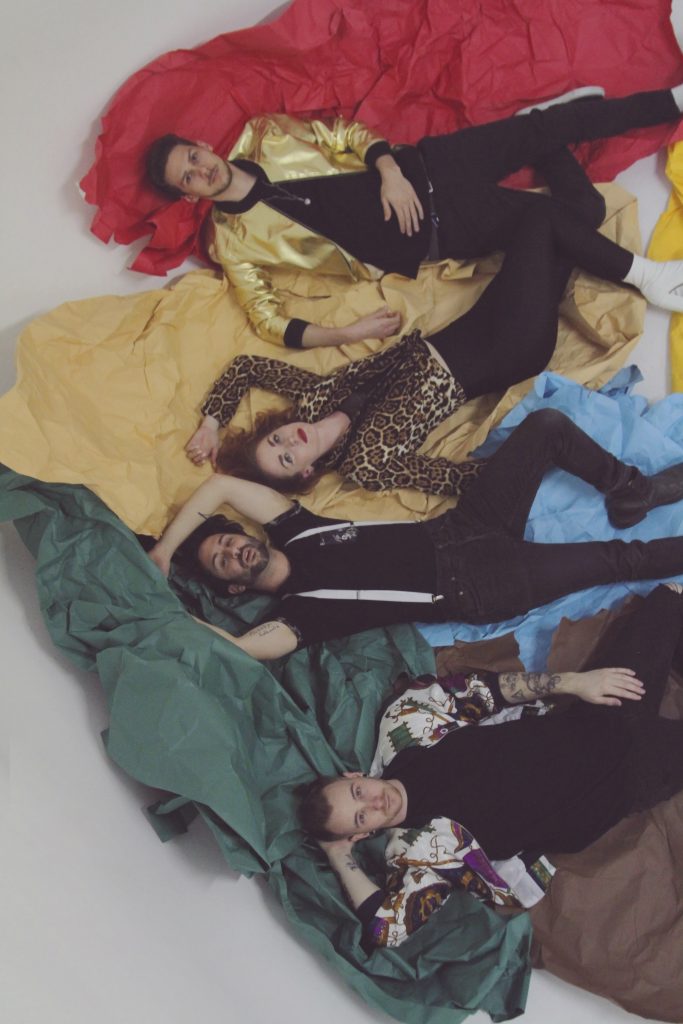 “They put it all out on the stage,” she says. “That’s when they felt most comfortable, and I know that’s when I feel most comfortable too. If I’m walking down the street I’m very self-conscious, but onstage I can be my complete self. I’m confident and happy.”

The band’s ultimate goal is to one day sell out London’s Wembley stadium, but they’re not rushing. Their Bonnaroo experience was another big step in a journey that also included stops at this year’s Sundance and South by Southwest festivals, and no matter how many people are in attendance going forward—or what those people choose to call their music—they intend to keep doing their dirty pop, future ’80s thing.

“Or else you won’t play for five million,” Ohlbaum adds.

The Foxies will headline The High Watt July 25.