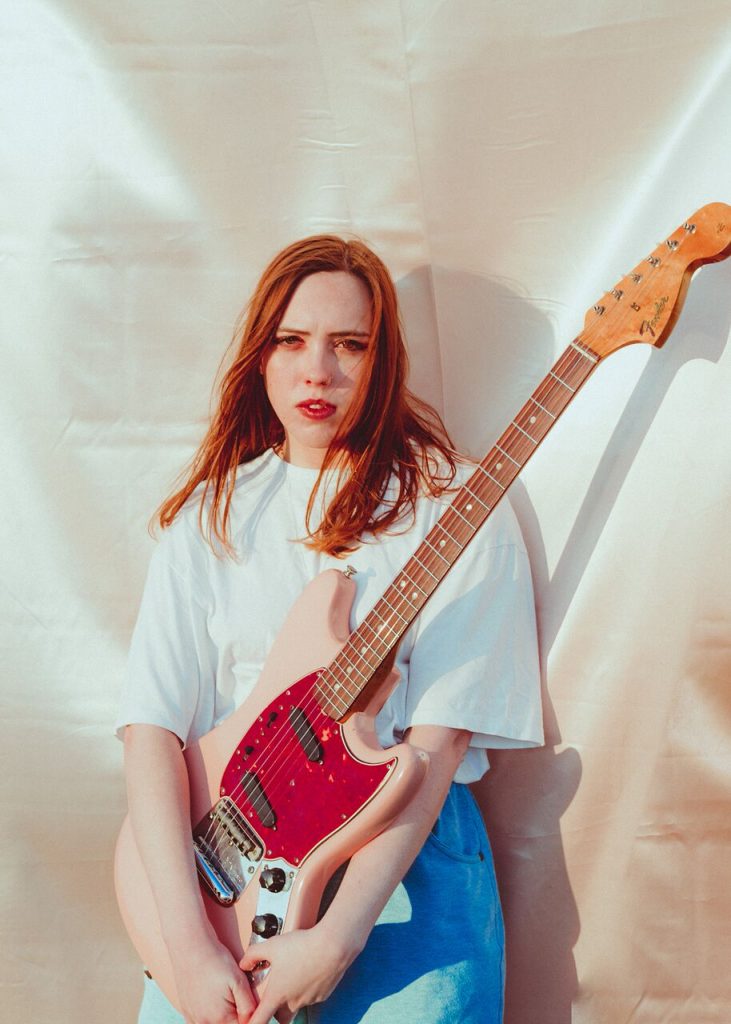 Sophie Allison is easy to find in a crowd.

I’m meeting her at Portland Brew on 12South—walking distance from the Belmont-Hillsboro house she grew up in—and it takes all of three seconds to spot her in the crowded coffee shop. Yes, I obviously knew who I was looking for before walking in. And yes, Allison’s fuschia eyeshadow and expertly crafted, just-Daria-enough outfit make her hard to miss. But there’s still something about her that tells me I would have found her no matter what—even if I hadn’t seen a picture of her beforehand.

She has an intangible air of coolness about her, that perfect mix of aloofness and charm that so often surrounds people who make good art; she greets other, equally cool people that walk into the shop with a monotone “hey” and nonchalant head nod; and I can imagine random people going up to her at restaurants and asking her if she’s a musician, or an artist, or someone they should know. If they even have the courage to talk to her, that is.

“People have said that I seem very cold at first, from my outward persona,” she says matter-of-factly, less than thirty minutes into our interview. “But it’s not [my] inner self. That’s kind of what romanticizing people is all about: their outward persona is what you’re seeing, and you’re deciding that’s all they are.”

And sure enough, that isn’t all that Allison is. Under the moniker Soccer Mommy, the twenty-year-old has released vulnerable, gut-wrenchingly confessional music since 2015. Her songs can make you squirm, sigh, or cry—sometimes all in the same track—and call to mind everything from Mark Kozelek’s no-bullshit, fact-firing style on Benji to Joni Mitchell’s heartbreaking self-awareness on Blue. 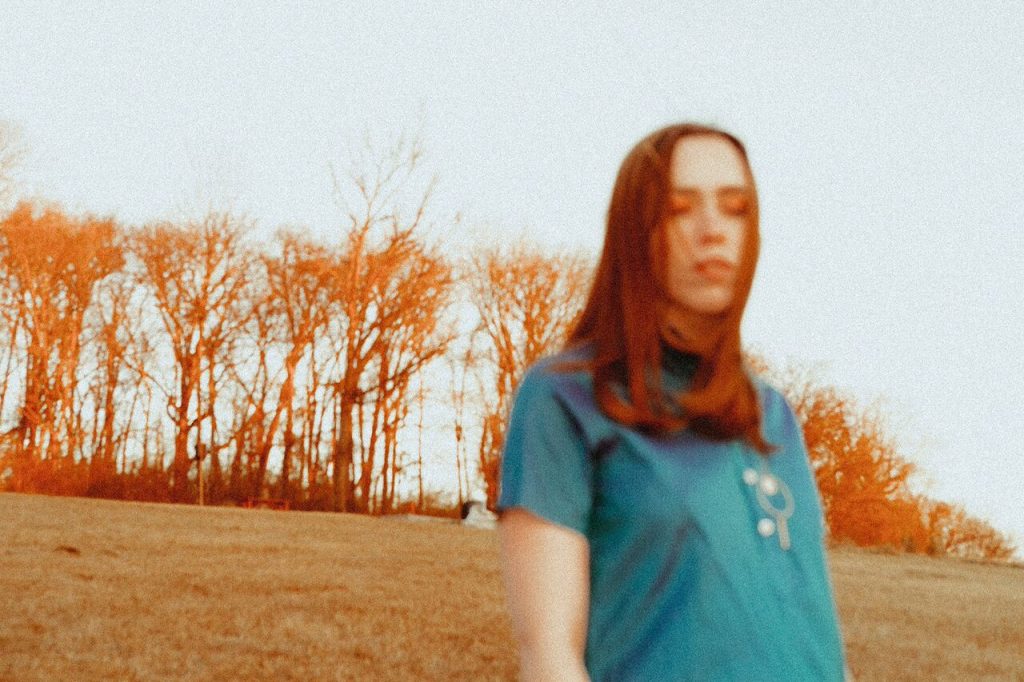 Sonically, it wouldn’t be totally wrong to lump her in with the ’90s revivalism currently sweeping Nashville rock—there’s some Liz Phair here, some Elliott Smith there. But it wouldn’t be totally right, either. Allison can effortlessly skirt from warm and breezy to gritty and aggressive with a single chord change, and her melodies are too damn catchy to be grouped in with a bunch of fuzzy garage rock. Or, to hear Allison describe the sound on her Bandcamp bio: “chill but kinda sad.”

Whatever you want to call it, she has her own thing going on, and people have taken notice. Without an actual debut LP to her name, Allison’s checked off all the proverbial indie rock boxes: Pitchfork, The Fader, NPR, NME, Audiotree, and even The New York Times (she was part of a roundtable called “Rock’s Not Dead, It’s Ruled by Women”). She’s also, as many of the above have reported, been defined by—and bristled against—the designation of “sad girl music.” She understands why the label came about, but she’s understandably not in love with it.

“I don’t mind the idea of writing music for people who are sad and writing sad songs. And honestly, I’m a girl,” Allison says, with a slight chuckle.

“What’s always bothered me about it is the way it’s used in a derogatory way. It’s like, ‘It’s just sad girl music. Sad girl shit.’ That’s the only way I ever really hear it used, is to put down an artist for being sad girl music. That’s just really what bothers me. It’s just the idea that being a sad girl is dumb, or weak, or vulnerable, or stupid. It kind of connects a negative connotation with being a woman and being vulnerable, and being sad and expressing it.” 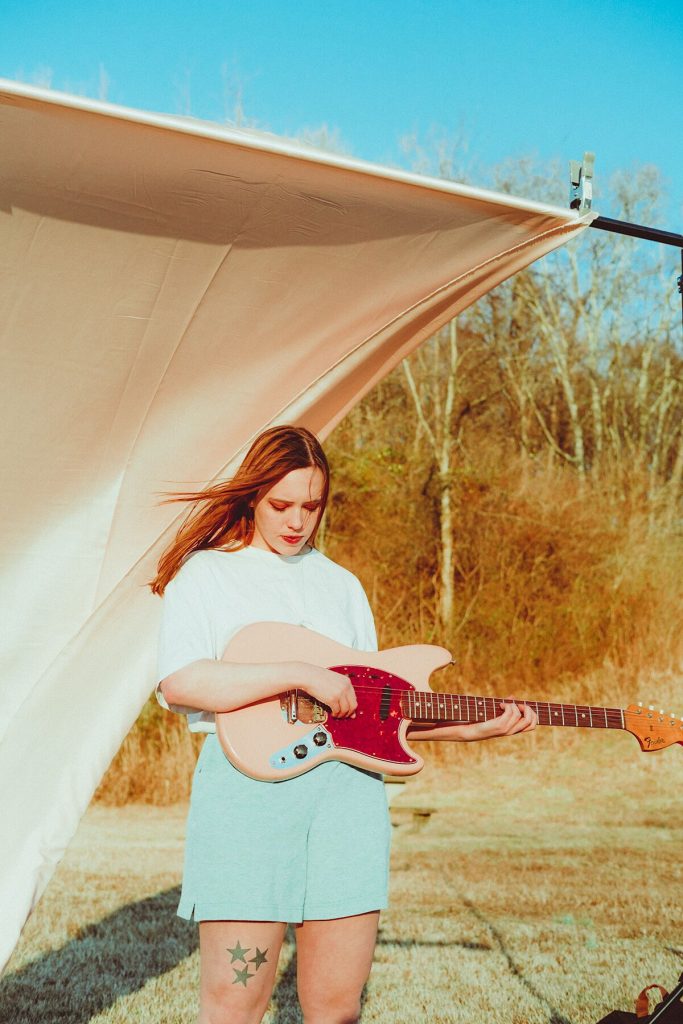 Short-sided connotations aside, being sad and expressing it has sort of always been Soccer Mommy’s calling card. Though Allison began playing guitar at five (she made her parents buy her an autographed acoustic at a Riders in the Sky benefit show), and though she played in various Nashville School of the Arts ensembles throughout high school, she didn’t start writing Soccer Mommy music until the summer before her freshman year at NYU. She’d written songs her whole life—her first was titled “What the Heck Is a Cowgirl”—but Nashville’s then-exploding punk scene didn’t feel like the right outlet for Soccer Mommy.

“I wish I could write punk music, but I just can’t. And I obviously can’t sing it at all. It wasn’t the music I was writing,” she explains. “I just felt like if I’d tried to play [my music], there wouldn’t be a scene for it, and people probably wouldn’t like it. Or, if it was good, it wouldn’t be good enough . . . That’s kind of why I never really just tried to start playing shows with a band and get out that way. I just started making music basically for myself to put on Bandcamp.”

The result was the aptly titled songs for the recently sad, a five-track EP recorded on an old TASCAM and released with little fanfare. She followed it up with the two-part songs from my bedroom EP (recorded during winter break) and the for young hearts tape (released via ultra-hip, Queens-based tape label Orchid Tapes). The prolific string of releases and association with Orchid earned Allison a fanbase beyond her old NSA classmates, landed her national press, and culminated in Collection, a kind of greatest hits compilation of her back catalog that came out in August. “I was pretty much just doing it because I liked doing it,” she says. “It was fun for me. I didn’t think I would have a response just pop up out of nowhere.” 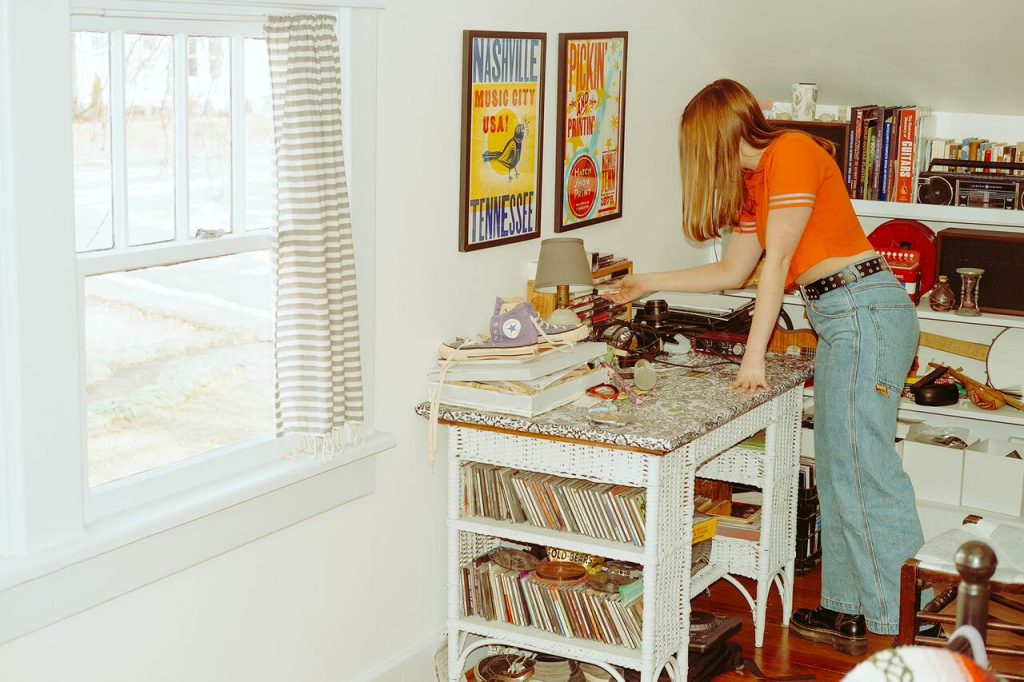 On these early releases, Allison’s rolling chords, Kim Deal-y vocal overdubs, and mid-tempo melodies create a collection of songs that feel like that moment right before dozing off on a breezy, late-summer afternoon. And lyrics like “Do you think it’s sweet, I’m nervous talking to you / or am I just a freak? / Sat by me on the bus on the way back to school / I wish I was cool like you” nail the self-doubt and isolation that come with coming of age.

But there are some tinges of real, non-teenage melancholy too—spots where Allison hints that the summer and its carefree concerns can’t last forever. On “Waiting for Cars,” she sings over eerie piano plunks: “Saw you on the street one summer evening you were empty as could be / You were lying in the road just waiting for the cars to set you free.” It’s a haunting, bold meditation on being afraid to love—or maybe figuring out what exactly love even is.

It’s this feeling that Allison expands and runs with on Clean, her first label full-length. Produced by Gabe Waxman (War on Drugs, Deerhunter, Beirut), Clean is Soccer Mommy through a warm, analog lens—one that augments, but doesn’t abandon, Allison’s lo-fi roots. What little studio flourishes are added (the warped, wobbly fadeout on “Cool” or the startling change in mix near the end of “Still Clean”) make for a dynamic, cinematic work that until now has been missing from Allison’s catalog. It’s the type of album—and I use that term the way my dad would—you could leave in your car’s CD player for an entire summer or debate with a friend about which side is better. 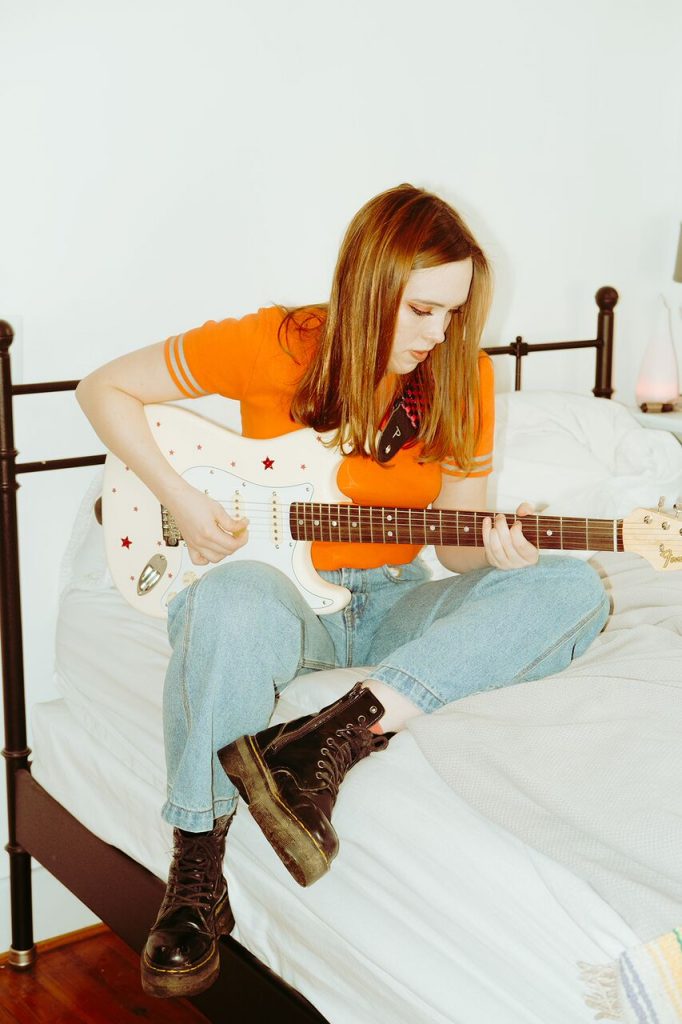 Thematically, Allison touches on some familiar ground: odes to unrequited love, meditations on self-doubt, and romanticized visions of other people’s lives. On earlier releases, these topics may have been discussed with lament, but Clean finds her addressing them with newfound ferocity. In each of the first three tracks, she compares people to animals, singing lines like “I don’t wanna be your fucking dog / that you drag around” on “Your Dog” and “She’ll break you down and eat you whole / I saw her do it after school / She’s an animal” on “Cool.”

“I use a lot of violent imagery often to describe pain and emotions or sickness,” she says. “I think my anxiety is kind of a violent feeling that’s really intense and really angry . . .  Usually when I write it in a song, it’s because I’m literally sick or something. That literally has happened—where I felt sick to the extent—or I felt anxious to the extent where I was sick.”

In talking about sickness, Allison finds catharsis and a new sense of agency on Clean. The anthemic “Your Dog,” with its chugging, minimal groove and scurrying guitars, is possibly the most scathing thing Allison’s ever written. It’s also the most empowering.

“Women just making really confessional music and not being shy of it is in itself political,” she says of “Your Dog.” “So doing it in itself is just kind of taking a stand and acting, rather than just laying back and not wanting to be aggressive about what you’re doing . . . I don’t want to be somebody’s convenient person who’s there for them whenever they need it, [when] I’m not going to get that in return.”

But Clean isn’t one-dimensional. It’s a complicated and multifaceted entity that finds Allison grappling with the same self-doubt and insecurity she faced on earlier releases. On tracks like “Cool” and “Last Girl,” she sings about wishing she were someone else—or at least the version of that someone she’s built in her head. Whether the subject in question is a love interest, a love interest’s love interest, or the unnamed “stoner girl” on “Clean,” there’s always someone who seems to have it better. Someone with, as Allison said earlier, an outward persona that’s been romanticized.

“It’s not a hateful inferiority that I’m feeling. It’s just I do feel inferior to other people, or I feel like I’m comparing myself to other people,” Allison explains. “It’s just a ‘She’s beautiful, I feel ugly,’  kind of feeling. [It’s] comparing yourself to other people and letting it make you feel inferior, when really that’s all a way to pit women against each other. And it’s an insecurity that definitely just makes a lot of women feel hateful toward each other, which is an issue. That doesn’t help us.” 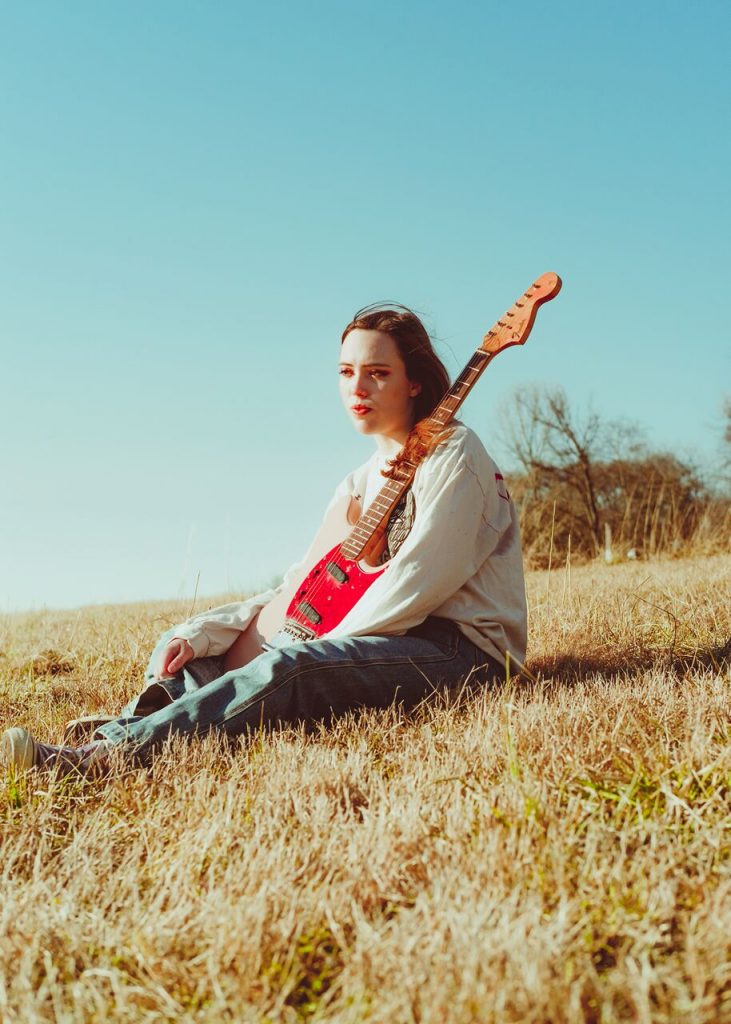 But what about the people that romanticize her? The fans that want to be as cool as Soccer Mommy? Surely there’s someone shouting along to the chorus of “Cool” (“I wanna know like you / I wanna be that cool”) with Allison, not the stoner girl, in mind.

That struggle, though, is Soccer Mommy. As is the case with like-minded songwriters such as Angel Olsen or Mitski (whom Allison opened for back in October), Allison is on the brink of a brave new world in rock—one in which women freely and honestly express themselves without being dismissed as “sad girl music.” As Allison told me just before leaving Portland Brew: “Everyone loves to say rock’s dead now. All these white dudes love to say rock is dead . . . It’s evolved. There are buzz bands, and it is still rock. It’s just not the exact same. It’s not all Strokes-sounding bands. That’s boring . . . There’s something new now.”

And is Soccer Mommy that something new?

“Hopefully,” she says unflinchingly. “I guess we can hope.”

Clean is out now, and Soccer Mommy will play the East Room on March 23.