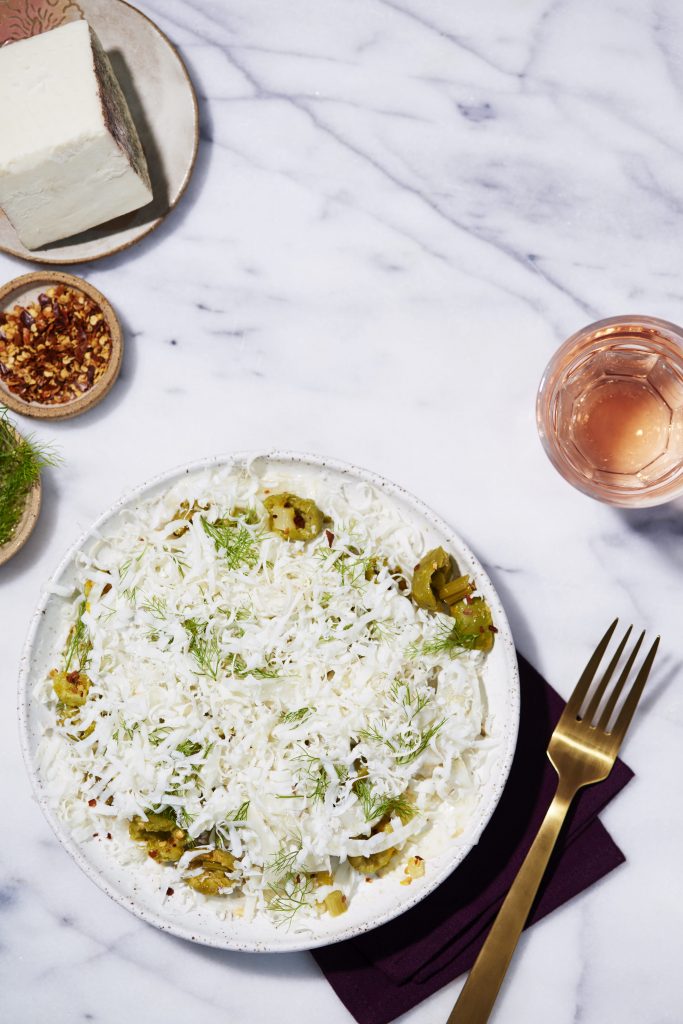 Begin by breaking down the fennel. Pick the fronds (these resemble dill) and store them in your refrigerator as you would a delicate herb. Remove the stalks from the bulb. Slice them across the grain into 1/4-inch rings. Divide the bulb in half and remove the core. Shave the bulb thin on a mandolin into ice water. Allow the fennel to sit in the water for 15 minutes, then remove and run through a salad spinner to completely dry. Store in the refrigerator.

To make the fennel conserva: Place the sliced stalks in a small pot. Season with a pinch of salt and add 5 ounces of extra virgin olive oil. The oil should almost cover the stalks. Simmer on low heat until the fennel stalks become tender, about 45 minutes. Cool. This will produce more fennel conserva than the recipe requires. The extra can be refrigerated and used for salads, pastas, and braises.

Add the shaved fennel to a large mixing bowl and season with salt, the juice of the remaining half lemon, and the remaining ounce of olive oil. Toss to coat the fennel. The fennel should be very lightly dressed and slightly under seasoned as both the olives and the cheese are salty. Divide the dressed fennel over the olives on each plate.

Add a layer of the fennel fronds over the shaved fennel.

Finish by aggressively shaving the cheese over the salads with a wide blade microplane.