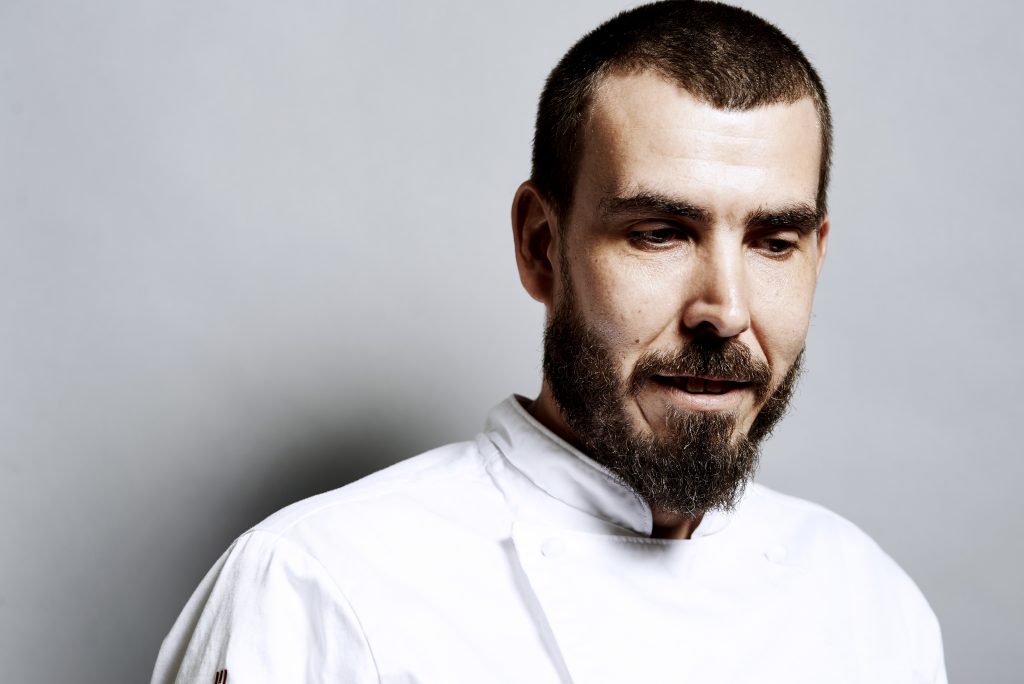 The lamb is raw. Thinly sliced. The purple potatoes are thinner. So are the tomatoes. Here and there, atop the lamb, are black dots. Fermented black garlic I’m told, with the additive xanthan helping maintain the dots’ firm margins. Alongside a single black dot on each piece of lamb are two or three red-orange translucent pearls: currants, after something called “spherification.” The process involves blending the fruit with strange-sounding, science-y ingredients like sodium alginate and giving it a calcium bath, which triggers chemical reactions that bind the mixture into caviar-like beads.

Chef Chris Anderson’s expert hand assembles the pieces just so, using tweezers to place feathery microgreens, one by one, among the angled cuts of pink, finely striated flesh. The layers and folds of this lamb carpaccio are sitting on a square block of Himalayan pink salt. Served with the transition between summer and fall in mind, the ensemble recalls fallen leaves resting on stone.

I take it all in and gather my first taste. There’s so much all at once. Smoky, umami richness. Fresh, bright, sour tang. The crunch of a perfectly fried wafer of indigo potato. Gentle pops as the currant pearls burst. An effervescent, dusty undercurrent of salt. Even the tiniest bites boom with flavors. The dish is a work of art. And it’s only the first course.

Welcome to the wildly creative, award-winning cuisine of Chef Chris Anderson. One of the newest additions to the local fine dining scene, Anderson moved to Nashville and into his executive chef position at the Hutton Hotel not even three months ago. The hotel is in the midst of a major renovation, and that includes an entirely new restaurant built from the ground up, according to Anderson’s vision.

Our shared table is too short. The six-foot-four chef stretches his legs out from underneath the table, and in a syrupy North Carolina drawl states, “I want to show this city what we can do. I wanna rip it apart and rebuild it. I want to make sure that we do very well here, and that we show what good cuisine really can be . . . Showing people a new kind of food.” Anderson left the South to pursue his culinary career, and after stops in France, Chicago, and California, he’s returned to his homeland with the ultimate prize: a Michelin star. 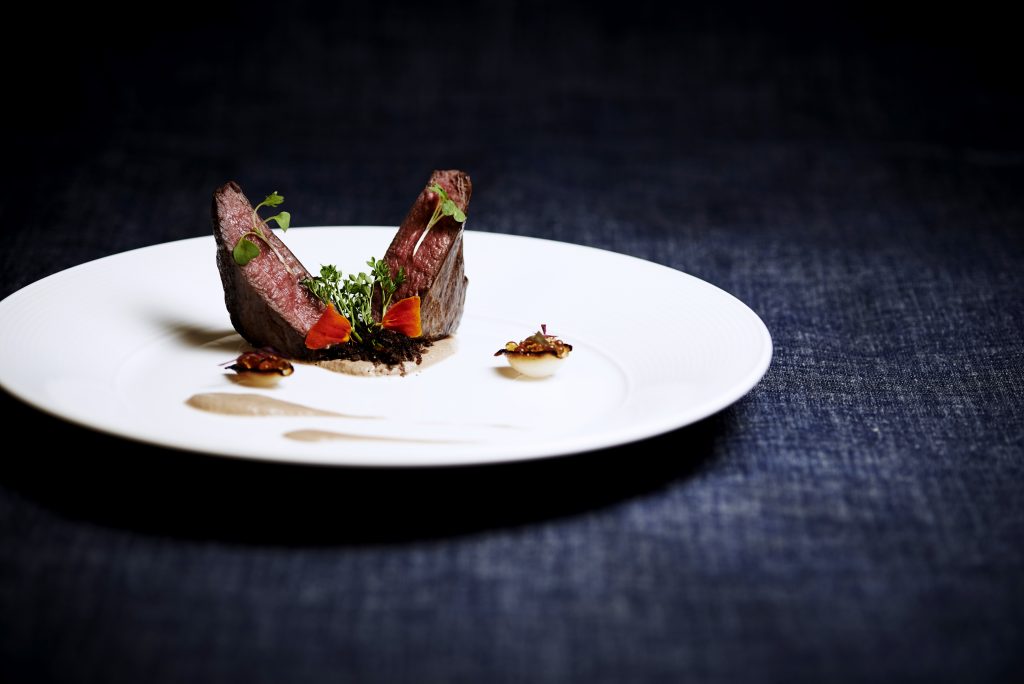 Michelin guides are better known in Europe, where the difference between one, two, or three stars (or—gasp—no star at all) can be a matter of culinary life and death. “It’s probably the highest accolade you can get,” Anderson explains, with awe and humility. “I’ve always had tons of respect for it . . . For a cook, that’s like the end-all and be-all. That’s like taking home an Academy Award. It essentially signs, seals, and delivers you as somebody that’s the top of the top.”

Anderson earned his star cooking at Moto, a now-shuttered Chicago restaurant once at the forefront of the molecular gastronomy movement, sometimes known as modernist cuisine. Chefs like Anderson’s mentor, the late Homaro Cantu, Wylie Dufresne (of wd~50) and Ferran Adrià (of elBulli) used specialized equipment and a chem lab of unusual ingredients to create recipes designed to delight and surprise: edible paper, savory balloons, deep-fried liquids. The possibilities were only limited by imagination.

This futuristic cooking makes up a critical part of Anderson’s kitchen repertoire, but the most advanced technology is only as good as the ingredients involved. Hydrocolloid additives notwithstanding, the chef’s shopping list is remarkable in its simplicity. Over the course of his experience at Chicago restaurants Alinea, L20, and Moto, Anderson noticed a trend: Why are we not doing anything American? he asked himself.

It’s clear the chef’s passion runs as deep as his Southern roots. He raises his voice. “I had an epiphany: I love my culture. I was like, ‘Why are we not using country hams instead of Ibérico hams? Why aren’t we using buttermilks instead of creams? Why aren’t we using the things from us? Why am I not using Carolina rice? I’m using sushi rice.’” Anderson begins pounding the table. “You know, I don’t understand. What makes our products—” Pound. “Not.” Pound. “Good.” Pound. “Enough.” Pound. “To serve in fine dining?” By the end, he’s practically yelling. 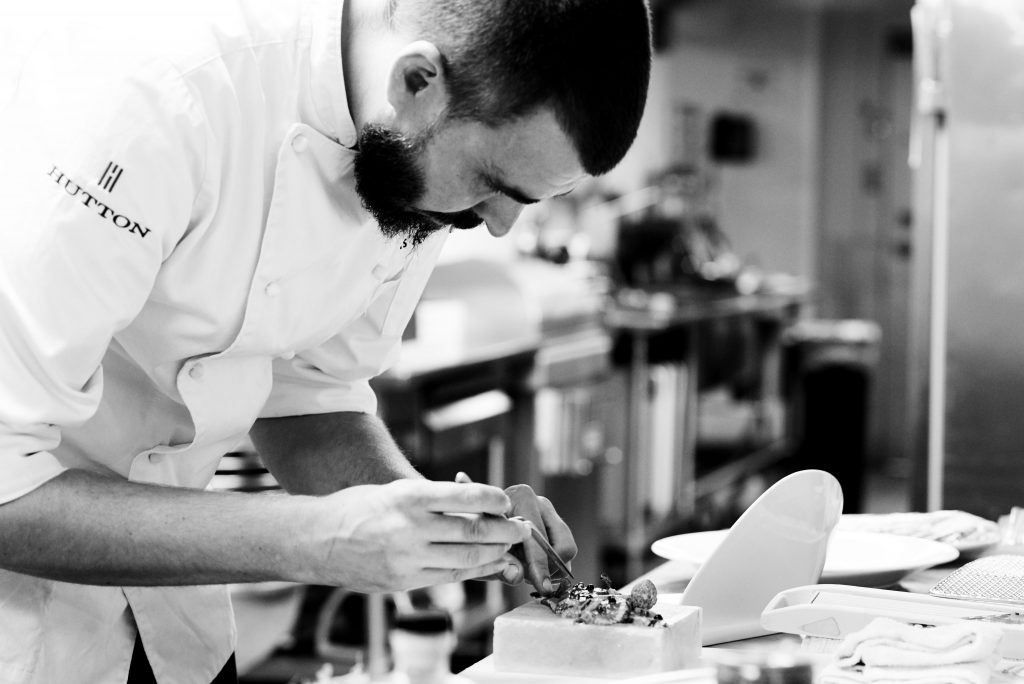 "I think it’s really cool that I’m able to come down here, being a native from the South, to be able to showcase everything I’ve learned and to bring a new light to what we already know.”

I want to shout back, “I don’t know!”—but I think the question is rhetorical. It’s also a good one. Middle Tennessee has one of the greatest concentrations of agricultural diversity in the country, if not the world. As our city has grown, so has its appetite for high-quality meats, dairy, and produce, and Nashville’s proximity to so many farms has kept it at the forefront of the farm-to-table movement. Chefs like Anderson can trust that local ingredients will be top-notch, and diners have come to expect the same. A customer base with a more discerning palate presents a challenge, as the chef lays out. “If I cook something that’s with country ham and rice, it better be perfect. ’Cause you cook it in a culture where they eat that stuff, they know what it should taste like. They know how it should be.”

I ask Anderson how he exceeds expectations for his clientele when presenting the same kind of food their mommas cooked for them. “You have to go for the artistic side of things,” he tells me. “You can’t just slap it on a plate and send it out. [That] doesn’t mean that it’s not delicious still. You can have red beans and rice—hate to say this, but it might look like a big poop pile on a plate!” Anderson laughs. “But! It’s absolutely delicious. I had to figure out how to take that food and that culture and pump all the techniques and knowledge I’ve learned from all these other chefs into my culture, into my food, and make it art.”

To demonstrate the practical application of his food philosophy, Anderson recalls a recent tasting menu. It started with the idea of a Russian caviar service, but then he took it down South. “Instead of doing Russian caviar like beluga with vodka, I did North Carolina osetra [sturgeon roe] with moonshine! It’s like, this is what we do. This is what we taste. This is what’s embodying our heart and soul . . . I think it’s really cool that I’m able to come down here, being a native from the South, to be able to showcase everything I’ve learned and to bring a new light to what we already know.”

Distant construction sounds from the Hutton’s renovation have buzzed and hammered and clanged throughout our conversation. Chef Anderson is recapping a recent appearance on Nashville Today where he made a hot crab dish, blending the soft-shell crabs he grew up eating in coastal North Carolina with hot chicken–style spices—to “meld me and Nashville,” he explains. He’s just wrapping up his story when suddenly the construction is no longer distant. A high-decibel screech echoes through the walls, and the two of us jump. When the ear-shattering whine finally stops, we share a nervous laugh and both admit we’d expected the walls to come crumbling down around us. A few short questions later, the room explodes with sound yet again, and it’s clear that our conversation has reached a natural stopping point. 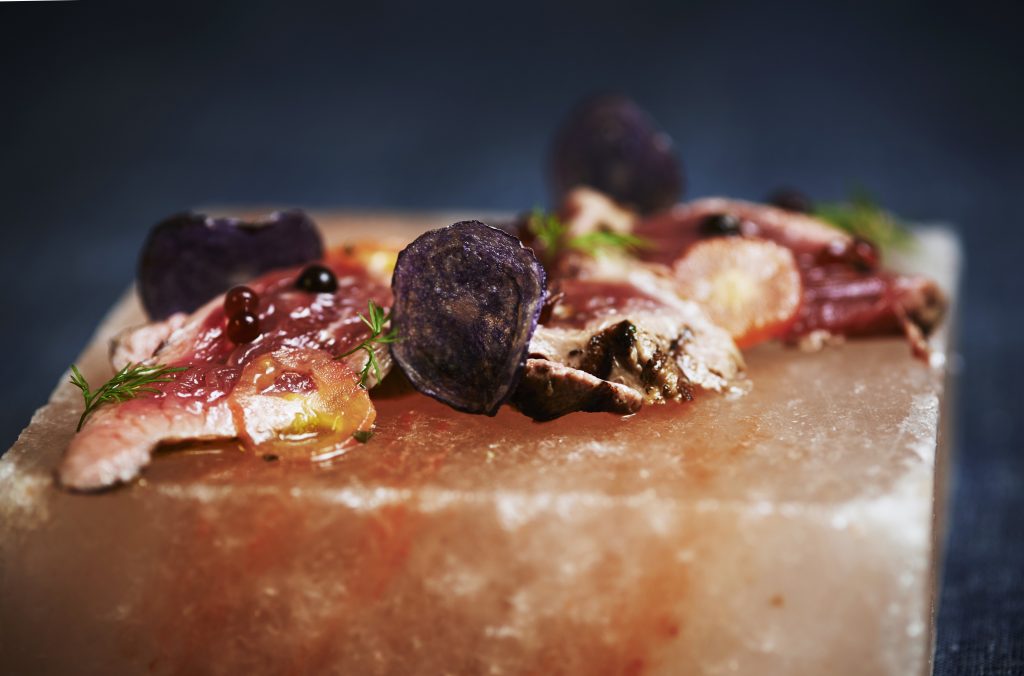 I return after a few days, meeting the chef in the Hutton’s lobby, which smells of fine incense and money. I follow Anderson down a maintenance staircase into the hotel’s basement and sprawling service kitchen. Signs bearing corporate platitudes adorn the walls: “Estoy Listo! I Am Ready!” Anderson confirms with a chuckle that they belonged to the previous owner and won’t be sticking around. His new restaurant won’t open for a few months—“We’re still coming up with the new name,” he tells me—but he’s generously agreed to prepare a few sample dishes. My tiny table for one is boxed in by racks overflowing with platters, glassware, plates: the many tools of the restaurant trade. Once the food arrives, I couldn’t care less for creature comforts, or lack thereof. It’s all about this food.

We start with the lamb on the salt block plate. Anderson follows it up with rabbit prepared three ways. There’s a tenderloin, no bigger than a fig, rolled in leek ash. Next, a rabbit bacon, minced and accompanied by a roasted green onion. “Definitely get the bacon with the onion,” Anderson advises. “It’s gonna be kinda salty. The onion’s gonna cut some of that with the charred flavor.” The final piece is a leg, cooked sous vide and stuffed with a sausage made from leftover slivers and finely ground bones. Anderson points out that adding the sausage helps him use the entire animal; he’s also made a stock and jus from the carcass.

Finally, he completes the meal with venison, also sous vide and finished with a brief sear. The meat is resting on what appears to be dirt. And it is, sort of. The chef calls it mushroom dirt: he takes cremini mushrooms, roasts them thoroughly, dehydrates the blackened fungi, then partially rehydrates them. The result is a dark, deep brown crumbly pile that closely resembles soil in both look and feel. Alongside the venison are hollowed-out pearl onions filled with more caviar-like beads, this time made of aged sherry vinegar. A few dabs of mushroom purée and the plate is done. It’s another gorgeous creation from Anderson, a combination of the simple—a perfectly prepared cut of protein with mushrooms and onions—and the complex chemistry of his pearls and dirt.

As I’m putting the dishes aside, Anderson ends our time together, telling me, “The chef has to be perfect for the food to be perfect.” Without a full kitchen, without a support staff, Chris Anderson has given me a magical meal, already close to perfect. I can’t imagine the amount of culinary perfection that’s going to spring forth once the chef has his restaurant. In a couple of short months, Nashville’s eaters will be able to see—and taste—for themselves.