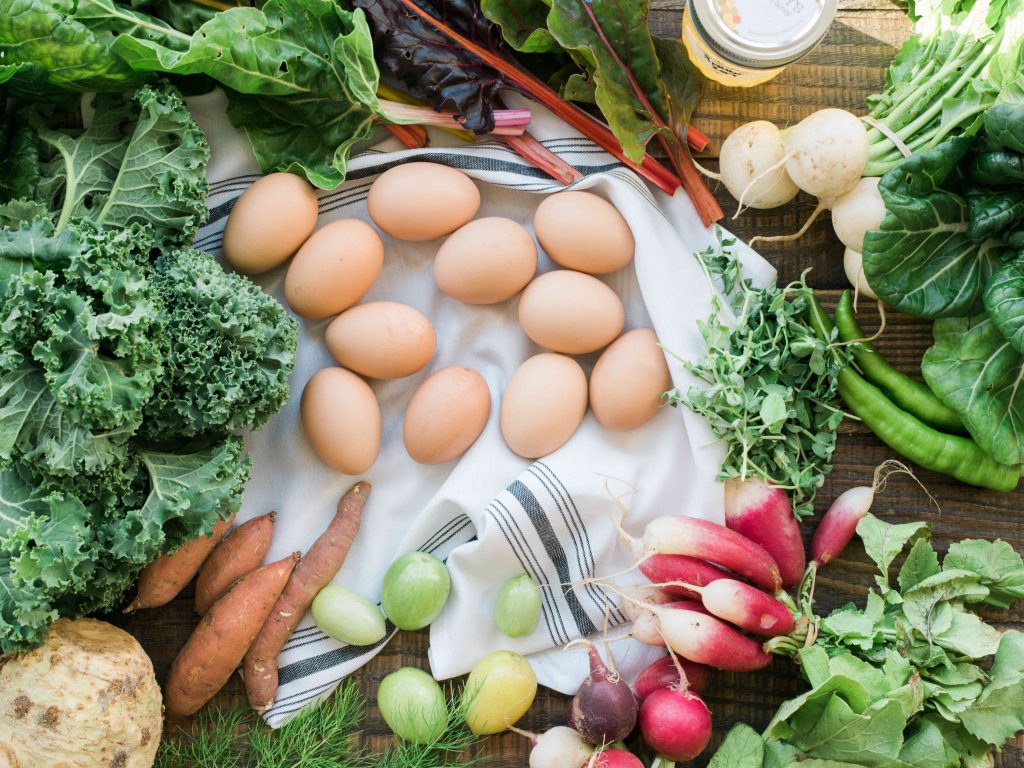 I pull onto a stretch of blacktop behind The Old School in Bells Bend and come to a stop in front of a rusted basketball hoop. This parking lot used to be a court, a remnant of the Wade School, which operated here from 1936 until the end of the century.

The Old School, a nine-acre farm and nonprofit started by Rowan Millar and Susan Richardson, is built on a historic foundation, but at their restaurant, The Old School Farm to Table, Executive Chef Kirstie Bidwell is always cooking up something new.

“Rather than kind of just coming up with a menu that I want to make, I get a list weekly from my vendors and they’ll be like, ‘This is what we’re growing, this is what you can use,’” she tells me. We’re sitting in the rear of the former elementary school, which is now the dining room. The farm and restaurant are a deceivingly short ten-minute drive from West Nashville. “You’ll be like, ‘I need twenty pounds of turnips,’ and they’ll say, ‘Well, the bugs ate half of them, so you can have ten pounds.’”

Bidwell grew up in Fort Collins, Colorado. While working at Second Home, a restaurant in the JW Marriott hotel in Denver, she met her mentor of sorts: a chef from Music City who eventually decided to move home. Bidwell followed and took a sous chef position at Pinewood in 2014 before moving over to Le Sel, and just over a year ago, Richardson called and told her they had an executive chef position available.

She’s just twenty-seven years old, but Bidwell has been honing her skills for more than a decade. When she was in high school, she took a trip with her grandmother to New York and set her sights on moving there as soon as she could. The pair visited an upscale restaurant at the top of a skyscraper, and Bidwell got to talking with a former chef. She decided then and there that she was going to go to culinary school. She doubled up on her classes during her junior year so she could take culinary classes as a senior, and she got into Johnson & Wales University-Denver. Although she decided not to move as far away as New York, her path was set. Then, when she was twenty years old, she was diagnosed with autoimmune disease. 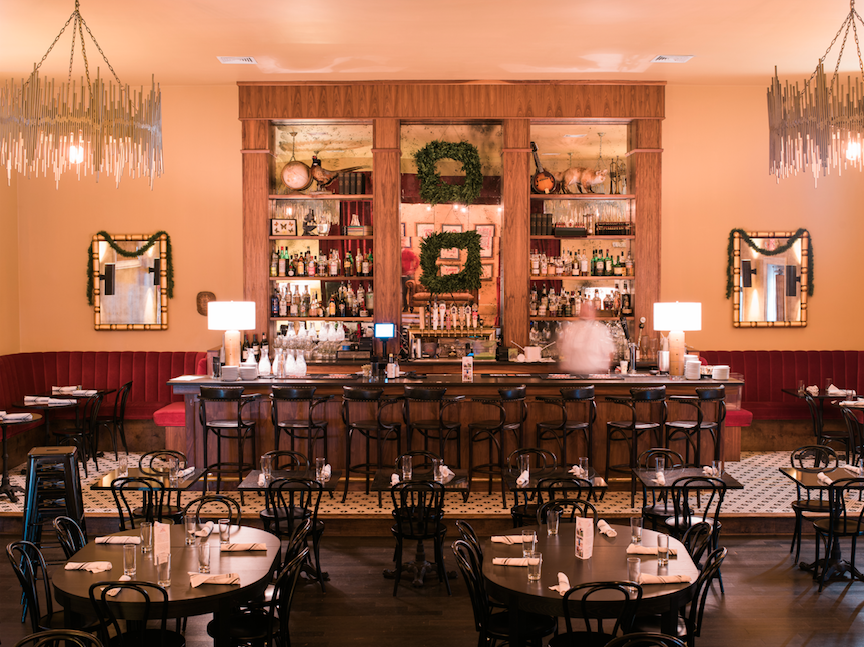 After a couple of years, her doctors made a health recommendation that conflicted with her plans. “They told me I had to quit eating gluten and dairy, and I had a meltdown,” she says, laughing. “I was like, ‘Oh my God, I went to culinary school for four years!’ Like, ‘This is all I know how to do! This is all I’m good at—cooking’ . . . And then I figured it out, you know? You always figure it out and make it work.” Now, when making cheeses and pastries, which the kitchen staff does in-house, Bidwell and her sous chef, who is also dairy-free, ask for outside input. “I’m always like, ‘Someone come taste this mascarpone,’” she laughs. “‘Tell me if it’s good.’”

The restaurant buys from and supports the farm, which, in partnership with Millar and Richardson’s other operation, MillarRich, provides job training and employment for adults with disabilities. The Old School Farm to Table gets eggs from their own chickens, honey and bee pollen from onsite hives, and the majority of their vegetables from their crops. They also source from other local vendors like KLD Farm and Porter Road Butcher, who supply their meat. Despite the challenge of having to improvise in the kitchen, Bidwell says it’s been one of the most rewarding work experiences she’s had.

“It’s different believing in what you’re making and having that relationship with the farmer and knowing that the Drinnons [who own KLD] work so hard,” she says. “They name their cows and take care of them and when one of them is sick, [Ken Drinnon] is just so distraught. He’s like, ‘Oh, one of the cows is sick. We have to go nurse it’ . . . So being able to work with a community like that probably was the biggest draw for me.”

Working with and supporting the community is integral to The Old School’s mission, and that sentiment dates back to the construction of the Wade School itself. Built with New Deal funding during the Great Depression, the construction project created jobs and the school served the area’s residents for sixty-one years.

However, when Millar and Richardson bought the school, it was in disrepair. They carried out a year-long renovation and restored everything that they could to its original condition, including the glossy woodwork in the front of the building. Photos of the building at its most dilapidated line the walls, revealing hallways covered in graffiti and rotting floorboards (“This looks like a bathroom out of Silent Hill or something, doesn’t it?” Bidwell jokes, pointing to one of the pictures), making the transformation even more striking. MillarRich keeps offices up front, and across from the dining room is an elegant bar. Ornate chandeliers hang from the high ceilings above a stage for live music. They also built a barn from the ground up out back, and a pottery studio downstairs handcrafts all of their dishes. 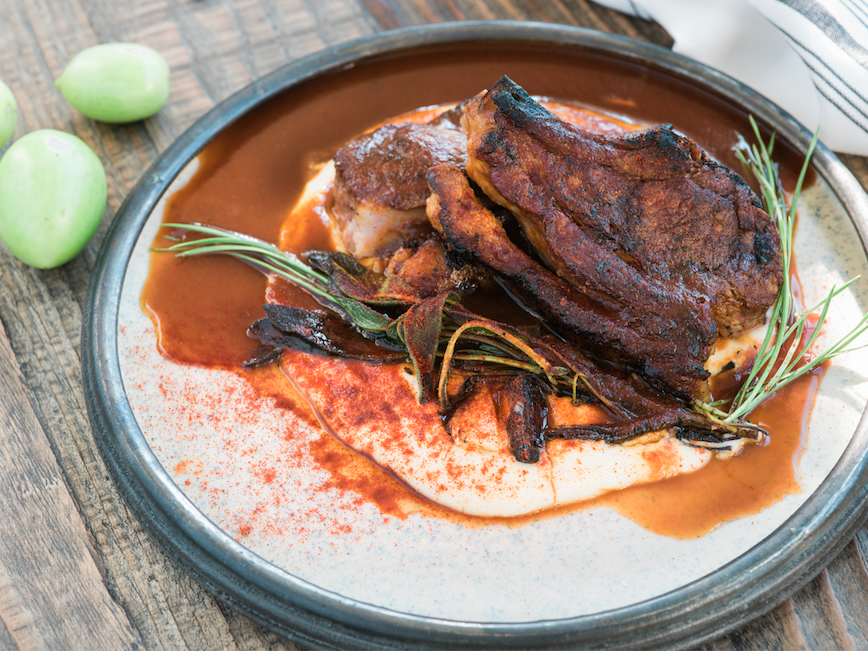 "I guess I’ve always valued the social aspect of eating,” she says. “And my allergies aside, it’s to me the best experience when you are able to just share everything with everybody at your table. . ."

There’s a spirit of connectedness coursing through the work that Bidwell and her colleagues are doing here. They host locals’ nights at the restaurant, where Bells Bend residents are invited to come try off-menu specials, and they host numerous fundraisers throughout the year.

That idea shows up on the menu as well. Most of the dishes are designed to be shared family style, a nod to Bidwell’s love of European food and training in traditional French cooking. “I guess I’ve always valued the social aspect of eating,” she says. “And my allergies aside, it’s to me the best experience when you are able to just share everything with everybody at your table and try this and taste this, and even if we order separate dishes we always end up tasting each other’s food . . . We do change our menu weekly or biweekly, and so I think that gives everybody the chance to try all of the vegetables that are available in their prime in their meal. So you’ll get to try carrots when they’re at their sweetest and the beets when they’re perfect and ready.”

Some of the entrees are also just really big. “The meatloaf’s like twelve ounces,” she says, laughing. “That’s a lot of bacon-wrapped meatloaf. But we have people that come in here—I mean, depending on the day I could probably put down twelve ounces of meatloaf . . .”

For the moment, other menu items include smoked trout and fennel risotto with pea shoots and shaved asiago from Kenny’s Farmhouse Cheese, and sweet potato pie with a cornmeal and duck fat crust, peppercorn marshmallow, and rosemary. They also have a weekend brunch menu that includes sweet dishes like cast-iron cinnamon buns with bourbon butter, maple pecan caramel, and brown sugar; and savory dishes like red flannel hash with potatoes, sweet potatoes, beets, caramelized onion, eggs sunny-side-up, and saba. Each time the menus change they are handwritten and offer both vegan and gluten-free options. 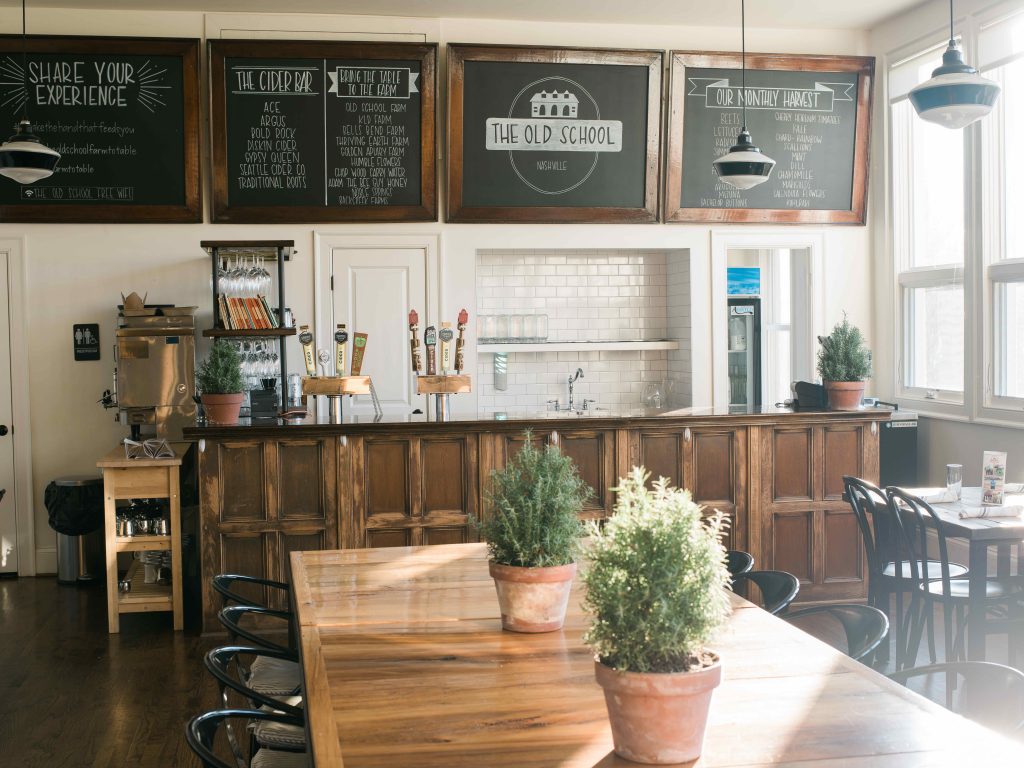 It’s clear that Bidwell has the utmost respect and appreciation for the farmland itself, and, spearheaded by Millar, The Old School is implementing a zero-waste initiative, taking on Mayor Megan Barry’s Food Saver Challenge to local businesses to measure and reduce their food waste. Additionally, they compost and recycle, and their power is geothermal.

Bidwell has come to care about Nashville in a similar way. Before she moved, she wasn’t sure she’d stick around for long. “When I was first getting ready to move here, my mom was like, ‘You’re going to meet a man and you’re going to get married and you’re never going to move home,”’ she recalls. “And I was like, ‘Ah, that’s never going to happen. I’m going to move back home.’ And I’ve since met my husband-to-be, so it sort of progressed. You know at first, growing up in Colorado, I was like, ‘Oh, the South, I don’t know . . . and I moved down here and Nashville’s been actually really incredible.”

Before I leave, Bidwell offers to show me the grounds. We pass a fire pit where they roast s’mores for kids, and a crew is preparing the barn for an event. There’s a greenhouse full of tomatoes—they already used a bunch for the homemade Bloody Mary mix—and the pen for the chickens, some of which escape from time to time. “They’ll just hop out,” she says, laughing.

Bidwell waves and bids passersby good morning as we walk the property, and she eventually leads us back inside where people hasten through the halls in preparation to open later in the afternoon. If you squint just right, you can almost imagine students from decades past hurrying to class.