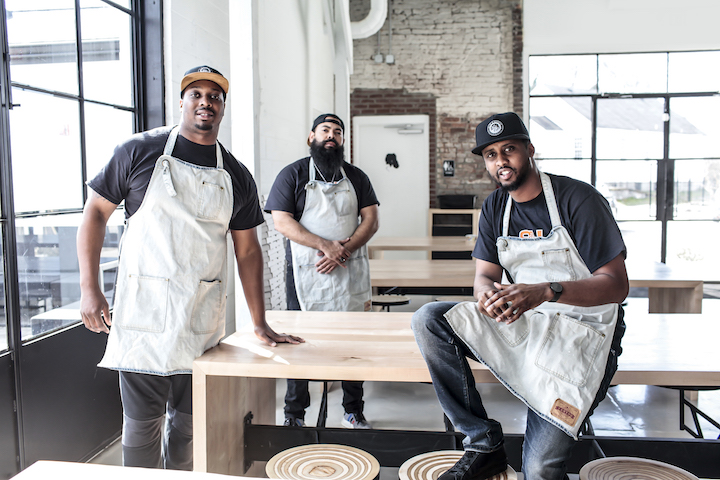 PIZZA IS MAGIC. Pizza is beloved by all ages: adults, children, teenagers both human and mutant ninja turtle. The humble pie is somehow greater than the sum of its traditionally simple parts, the triforce of bread, cheese, and sauce. Even the most seemingly incompatible ingredients (ham and pineapple, anchovies and anything) can exist in harmonious deliciousness. Just as shredded mozzarella binds toppings to crust, pizza is a food that brings people together. There’s a reason the word pizza is so often followed by party.

Slim & Husky’s Pizza Beeria is the newest addition to the surprisingly robust list of pizza options in Nashville. Situated on a bend in Buchanan Street, long the commercial heart of this stretch of North Nashville, Slim & Husky’s has only been open since mid-March, but co-owners Clint Gray, Derrick Moore, and Emanuel Reed have already mastered both the pizza and the party.

It’s 3 p.m. on a Thursday. Well past lunch, not yet happy hour. Still, the line at Slim & Husky’s stretches back and forth across a space barely big enough to hold these forty hungry people waiting for a pie. And they’re all in front of me. But it’s a friendly scene and I don’t mind the wait. Everyone seems to know each other already. Lots of hugs, handshakes, fist bumps. “Hey, didn’t your mom used to run that restaurant on 19th?” “Ahh! What’s up, baby?!” A solid mix of rap hits from the ’90s has folks murmuring classic hooks from LL Cool J, Warren G, 2Pac. Customers fill the time and limited space between each other with kinda-sorta-dancing: a bobbing head, shoulders shrugged left then right, a pair of hips swaying gently.

The line moves steadily, but just slowly enough that I have a chance to carefully study the menu. The two sections keep up the hip-hop theme. The You Can Get With This section features Slim & Husky’s signature pizzas. You Can Get With That lays out the choices for build-your-own pizzas and salads. That side also includes cinnamon rolls, which sound like a great way to follow up a slice, but one of the guys on the prep line says they’re not serving them yet. I make a sad face. “It sucks to be you,” he says with a conspiratorial smile. I’ll live, somehow. I take a seat at one of the communal tables. 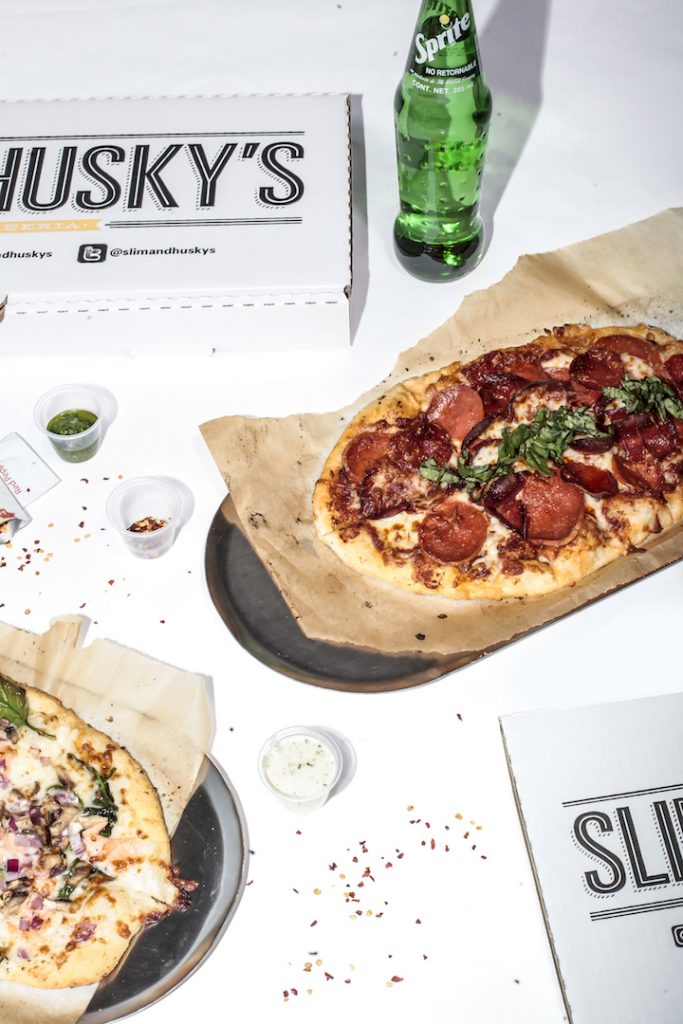 Gray is the first to take a moment away from servicing the queue and talk with me. I offer him some of the pizza I’ve ordered, a split featuring two house specials. One side is “The Smokin’ Herb”—a unique concoction that starts with a base of white sauce (a.k.a. “The White Sauce Is Slammin”) and finishes with spinach, mushrooms, and smoked salmon. The other side is “P.R.E.A.M.,” with the same white sauce, spinach, and mushrooms, plus pepperoni and Italian sausage. It’s a massive flavor bomb piled onto a husky-sized crust. Slim & Husky’s pies are long ovals, not circles, but at sixteen inches wide, there’s still plenty to share. Good thing: Clint Gray looks hungry.

Gray, Moore, and Reed were roommates at Tennessee State, and they’ve been inseparable ever since, as friends and as entrepreneurs. Gray and Moore are former football players, formidable from a young age. “We did the big-kids sports. We were the bruisers,” Gray explains, laughing heartily. “Our moms used to have to shop for us in the husky section as kids. So that means elastic jeans, not as many options for cool clothes.” But Reed is significantly smaller than his buddies. “That’s where Slim & Husky’s comes from: one skinny friend and two big dudes.”

It’s a joke between friends, but before all the pizza, the trio’s first business took advantage of their size. A few years out of college, Moore was working as an air traffic controller in Saginaw, Michigan, but grew homesick. When he returned to Nashville, the three friends started talking about ways to make money and work together. The two husky kids might not have had cool clothes when they were young, but their size put them in great demand later in life. “Us being football players, we were always moving people for free,” Gray recalls, and their payment was “just chicken and beer back then.”

Chicken and beer were fine and good for some college kids, but consumables don’t pay the bills—so they went legit and started their own moving company. Between bites of pizza, Gray tells me, “We wanted to be different. At the time, Nashville was becoming a more green city. We’ve always been community focused, all three of us being natives of Nashville. So we decided to put a sustainable focus to what our moving company represented. We called it Green Truck Moving Company. Our idea was we would recycle our customers’ boxes, we’d run our trucks on biodiesel, and then we would take a little portion of the proceeds and we would plant a couple trees for every move that we did.”

“THIS IS A FOOD DESERT RIGHT NOW . . . WE WANTED TO TIE BACK INTO AN AREA THAT WAS HISTORICALLY BLACK AND WOULD CONTINUE TO HAVE A BLACK BUSINESS THAT ALSO APPEALS TO EVERYBODY.”

To get the company going, each of the three friends invested $1,000. “Back then, that was everything we had,” Gray remembers. Green Truck’s thoughtfully considered mission reflected the values and needs of Nashvillians so accurately that in just a few years, the company found considerable success. “We expanded from working out of Derrick’s mom’s house,” Gray explains, “[and] we ended up becoming pretty much the largest local moving company here.” Six weeks before opening Slim & Husky’s, they sold Green Truck to a local family in order to focus more intently on a host of new projects, all under the umbrella of their concept company, SOON, short for “Something Out Of Nothing.”

I’m not exactly clear what Gray means by “concept company,” so he goes into greater detail. SOON, he tells me, gives the group the freedom and space to establish their business philosophy. Green Truck proved the idea’s effectiveness, and Slim & Husky’s instant success isn’t a coincidence. Gray gives me some background into the thinking behind, as they call it, their “pizza beeria”: “We really feel like there’s a gap in the hospitality industry that caters to everybody. You don’t walk in a lot of places and see fifty-fifty in regards to minority versus majority. You just don’t see that. It excludes minorities from experiencing the restaurant boom in Nashville.”

Moore takes a break from working the busy prep line and joins us as Gray continues: “I’m a foodie, so I go to all these places. But there’s a whole culture of people who aren’t experiencing it because it’s not catered to them. Our goal, the SOON concept, is to basically get rid of that divide and open up concepts that are fun and tasteful and for anybody. That’s our goal. That’s what Slim & Husky’s represents.”

Moore, it turns out, is hungry too, so a slice or two of my pie goes to him. I don’t mind. Though I’m not as slim as I used to be, I’m definitely not a husky, and a fully loaded Husky is too much for one slim man. Besides, my notes are getting greasy. Moore dives into our conversation. “SOON,” he interjects, “is just one of those things where we can get all of our ideas out, the fun stuff we have in our heads that we feel like Nashville needs. And it’s all community based.” 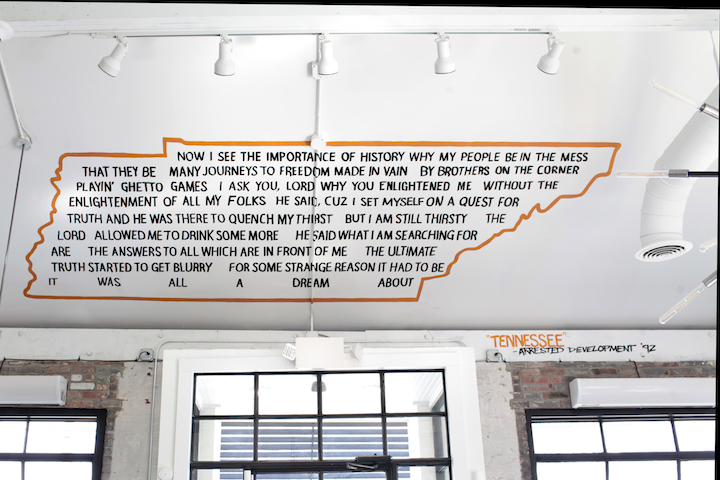 Reed is running errands, so I won’t get to meet him today, but now that I have at least two of the trio, I want to hear more about their team. Moore chimes in: “It’s a unique combination, a unique blend we have of personalities and characteristics. Clint’s the dude that has all these wild ideas, and we gotta bring him back down to earth sometimes.” At this, Gray laughs, but Moore goes on. “I’m operations, Clint is sales and marketing, and EJ [Reed] is finance . . . As far as working together, we have a great chemistry. We’re friends. Brothers, from the jump. You always think about, What would I be doing if I wasn’t with my bros? or, Could I do this without ‘em? The answer is always no.”

The SOON team talks consistently about their efforts being community based, and I ask what that means to them. Gray explains that, in part, it’s their decision to put down roots in North Nashville, historically the center of the city’s African-American population. All three have deep family history in the neighborhood, and they all feel a responsibility to care for the area and its residents. Gray points out: “You know, we could’ve gone to midtown, could’ve gone anywhere, but we wanted to come to North Nashville because we all have ties here, and it just means more. This is a food desert right now . . . We wanted to tie back into an area that was historically black and would continue to have a black business that also appeals to everybody.”

The nonstop crowds have made it clear that it most certainly does appeal to everybody. Gray tallies up the mayhem. “The last three days, we’ve sold almost three thousand pizzas out of fifteen hundred square feet . . . I’m like, ‘I’m gonna wake up here in a minute. That was just a dream, right?’” 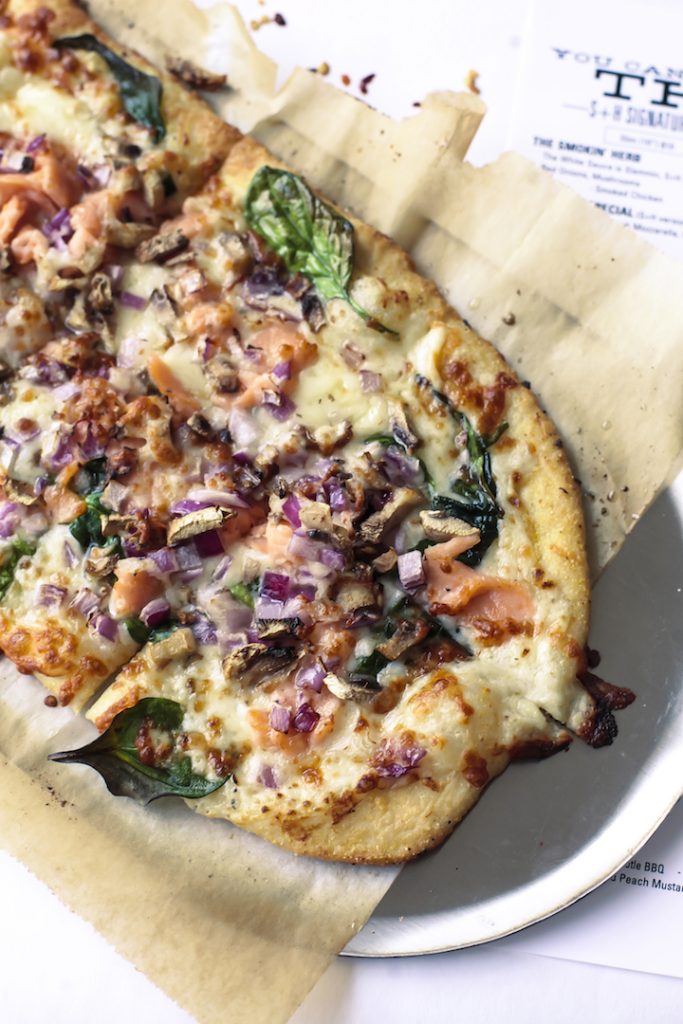 A few days before my conversations with Gray and Moore, my wife and I showed up for Slim & Husky’s opening night. The line was snaking around itself, no one willing to crack the door on a chilly night in early spring. The playlist pulsed loud and the crowd was rowdy, like a dance club had a baby with a pizzeria. A small bar featuring a dozen taps of local craft beers was swamped. We ended up in line next to Fallon Wilson, whom we’d seen speak a few days prior as part of an International Women’s Day event at Oz Arts Nashville. Though we’d never met, we became fast friends in line, and Wilson and a friend joined us for dinner. We barely knew each other, but we ended up eating family style, sharing slices back and forth.

After the meal, I asked Wilson for her take on the pizza: “It was totally not like anything [I’ve] ever consumed, because the sauces felt homemade, and also different at the same time. I know you cannot taste different! But it felt different!” More than the pies, though, what impressed Wilson was the vibe of the place. “What I love about this pizzeria, slash pub, slash, like, midnight club, trendy hipster [spot], is that it really is situated in a changing neighborhood. But when you walk into this place, it feels as if it’s been always a part of the neighborhood. I think they’ve really been intentional about making sure that this represents the community, even as the community changes.”

Clint Gray, Derrick Moore, and Emanuel Reed have created a space that fits perfectly into their old North Nashville neighborhood. It’s a small space, but it’s enough for now. With just fifteen hundred square feet, they’ve made something out of nothing. As Gray puts it, “It’s just pizza, man. You know what I’m saying? . . . We’re just selling pizza. And everybody can enjoy pizza.”