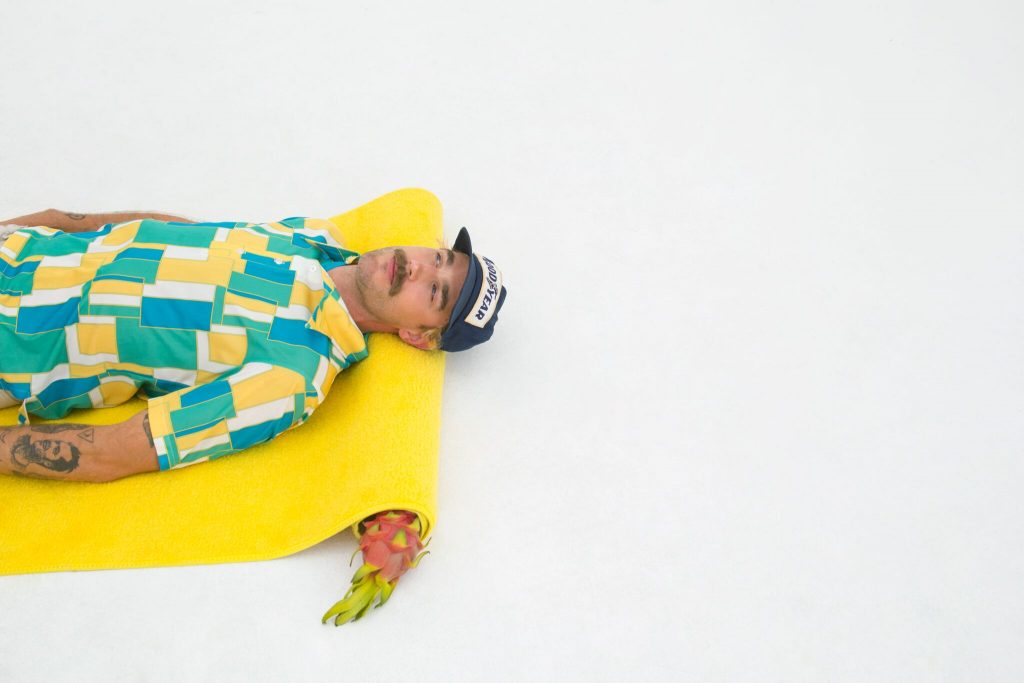 “Humanity is a beautiful thing to witness and be a part of, because it’s like from the beginning of time we’ve been murderers and nurturers,” Rayland Baxter says of the heavy worldview which permeates his ambitious new LP. “But I just wrote an album about things I think about on a daily basis, from love and lust to self-satisfaction to politics and gun laws.”

True enough. Wide Awake is a study in contrast that speaks to the time period it inhabits—taking modern society to task but striving to focus on individual responsibility, and doing it with a sinewy throwback sound.

It’s plugged in and well-informed, and it features an amalgamation of influences ranging from Beatles-esque pop sophistication to Laurel Canyon rock idealism to the laid-back lack of pretension often associated with Music City. But strangely enough, it’s also the result of a self-imposed exile of three months—one where Baxter purposely unplugged and did nothing but write songs alone in a former rubber band factory with virtually nothing but a notepad, plenty of cigarettes, and his thoughts to occupy the time. Although if he’s honest, those thoughts would sometimes wander.

“I might have took a few mushrooms every once in a while,” he says with a smirk, recalling the heady experience from the more-civilized confines of an East Nashville photography studio. 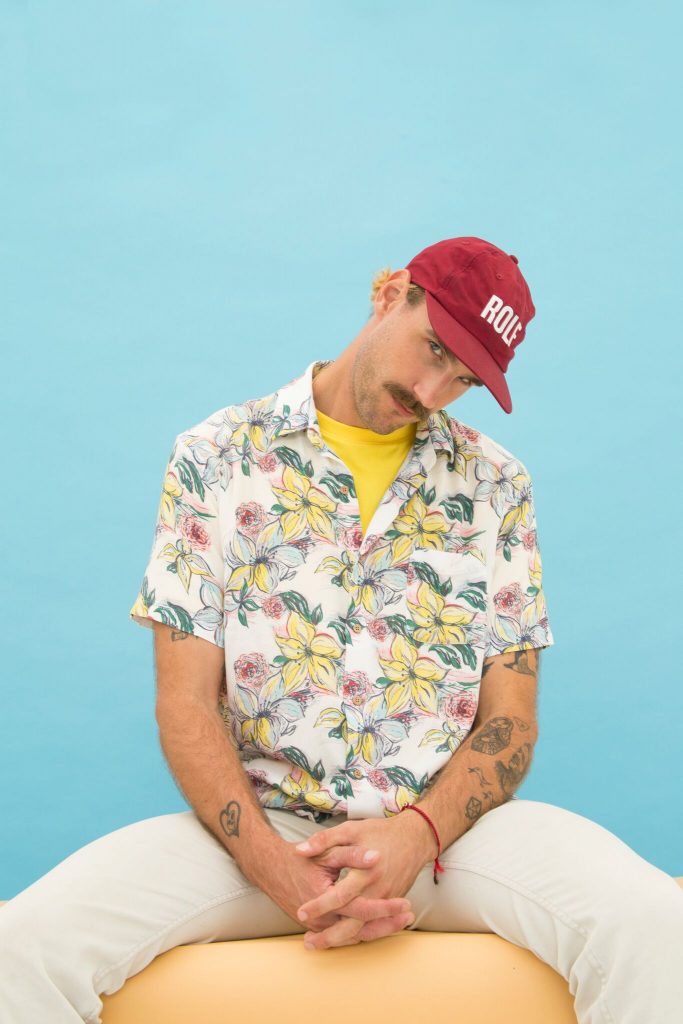 Tall and lean with a quiet confidence about him—plus a thick mustache and ever-present fisherman’s cap—it’s not hard to imagine Baxter prowling lonely, darkened hallways with a chemical smile and music on the brain. With two buzzed-about folk-rock albums already under his belt (2012’s Feathers & Fishhooks and 2015’s Imaginary Man), he’s dropped out in the name of creativity before. But for Wide Awake, he took his impulse to new extremes.

“I just wanted to be by myself,” he explains, thinking back to how his album of critiques—both personal and systemic—came to be. “I really enjoy my time alone, just giggling at my thoughts or wearing a different set of shoes for a little bit and going into the mind of someone else.” 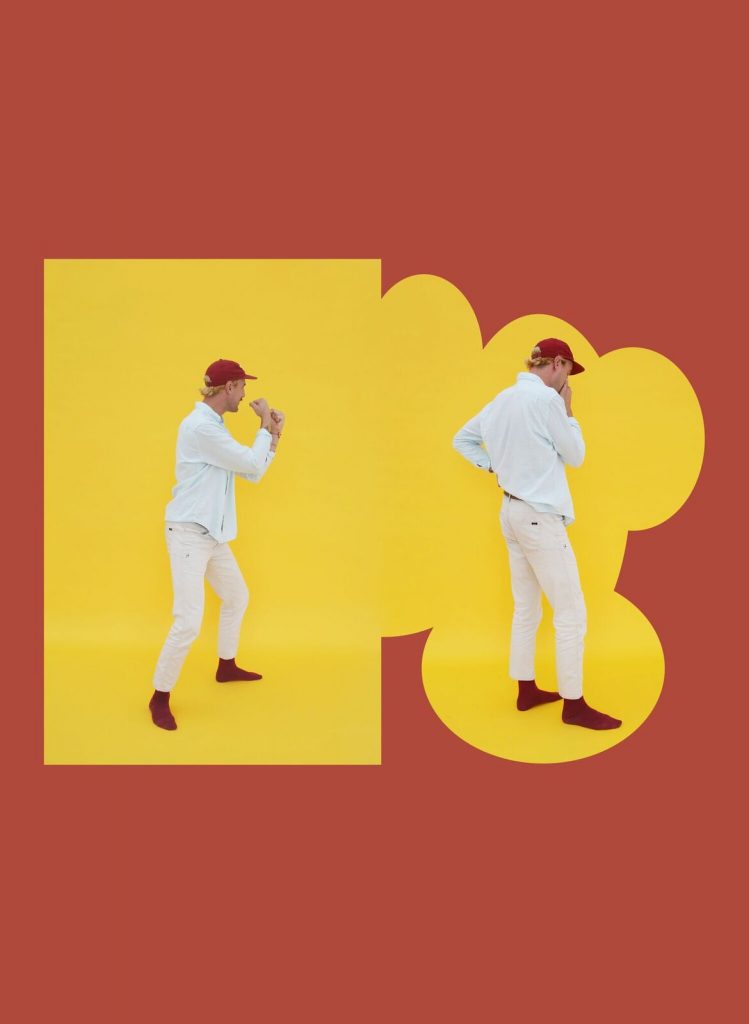 His three months in the factory—home to Thunder Sound Studio in Franklin, Kentucky, about forty-five minutes north of Nashville—was the longest time Baxter has ever spent alone. It was also the longest time he’s focused solely on writing, resulting in an album which feels like a personal diary of musical prose and “the height of me understanding what ‘the thing’ is,” Baxter says.

“All of my favorite writers have done this, so it was like, ‘How can I tap into this and turn on extreme focus?’” he explains. “For me, I wanted to go somewhere to a cabin, so I looked on Airbnb and nothing seemed to be what I wanted—and also it was gonna be very expensive. So I remembered my buddy Billy Swayze is up in Franklin, and I went up there and he was like, ‘Yeah man, you can stay here for free and use the place to write’ . . .  I liked it, it was haunting, and it cost me no money. So I just locked the door and went to town.”

During the day people were in and out of the studio itself, but Baxter took full advantage of his hideaway’s innate privacy. The Thunder Sound “factory” is not really a factory filled with machines, he explains. It’s more like a sprawling complex with a series of buildings, including a big shed “filled with old rubber wristbands from the pre–Lance Armstrong era.” One building holds the studio and tracking room, a kitchen, and a large “thunder chamber,” which itself contains three small offices. And one of those offices became Baxter’s home.

“I took blankets and stapled them over the windows, threw down a mattress, and at the end of it I had written like fifty songs,” he says. Ten standouts made the album, and although many labels have been applied to his work over the past eight years—alternative country, indie rock, Americana—Baxter continues to reject any official genre distinction, instead preferring to call his work that of a simple singer-songwriter.

“Americana? I don’t know what that is, nor do I know what indie rock is—independent rock ‘n’ roll?” he asks. “What was Bob Dylan or Neil Young or Paul Simon or Leonard Cohen? They were poets and they were singers, so that’s a singer-songwriter, I guess?” 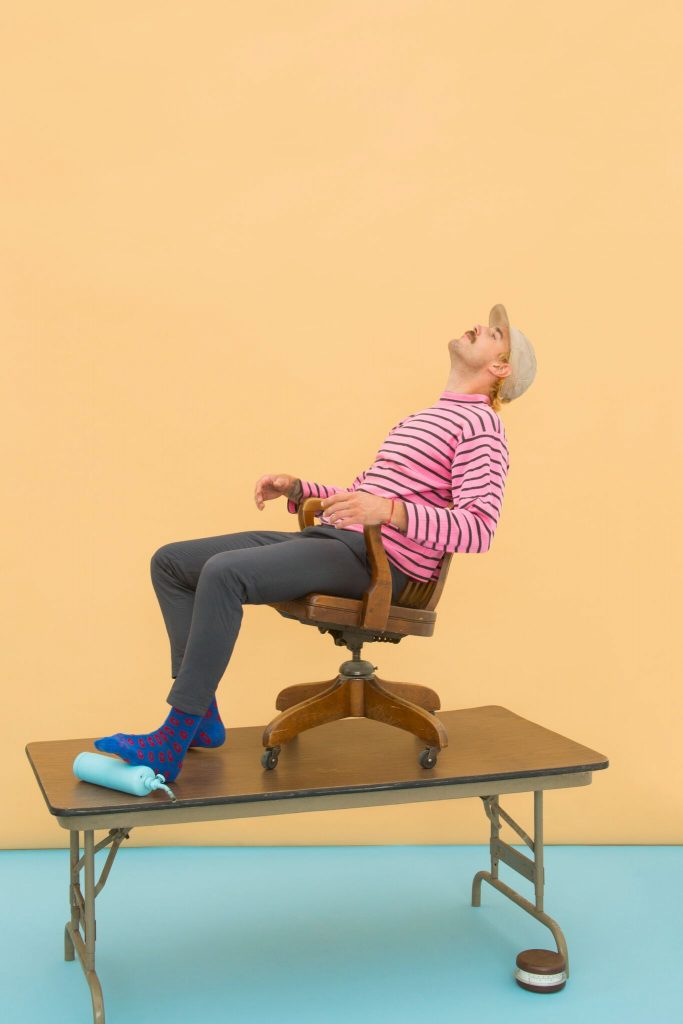 No matter what you call it, Wide Awake does feature a distinct sonic mix, helped along by musical chameleon Butch Walker, a producer with a rap sheet so diverse it includes both Taylor Swift and Sevendust. “It was terrifying how quick he and his engineer got it sounding good,” Baxter says.

Indeed, Wide Awake’s sound is another triumphant-if-unexpected combination—one that seems to recall the British Invasion with bright melodies, neatly placed bass lines, and sing-song vocal compositions, but with a little all-American sneer thrown in. When combined with Baxter’s poetic lyrics, the overall effect is clever but not sarcastic. Instead, it feels like a sincere mix of curious wit and personal experience.

“I’m not expressing anything really, other than I’m observant of a couple of things that are going on,” he says. “But there’s no hitting the nail on the head and forcing anyone to make a decision. It’s like, ‘Let’s have a laugh about some serious shit for a second.’” 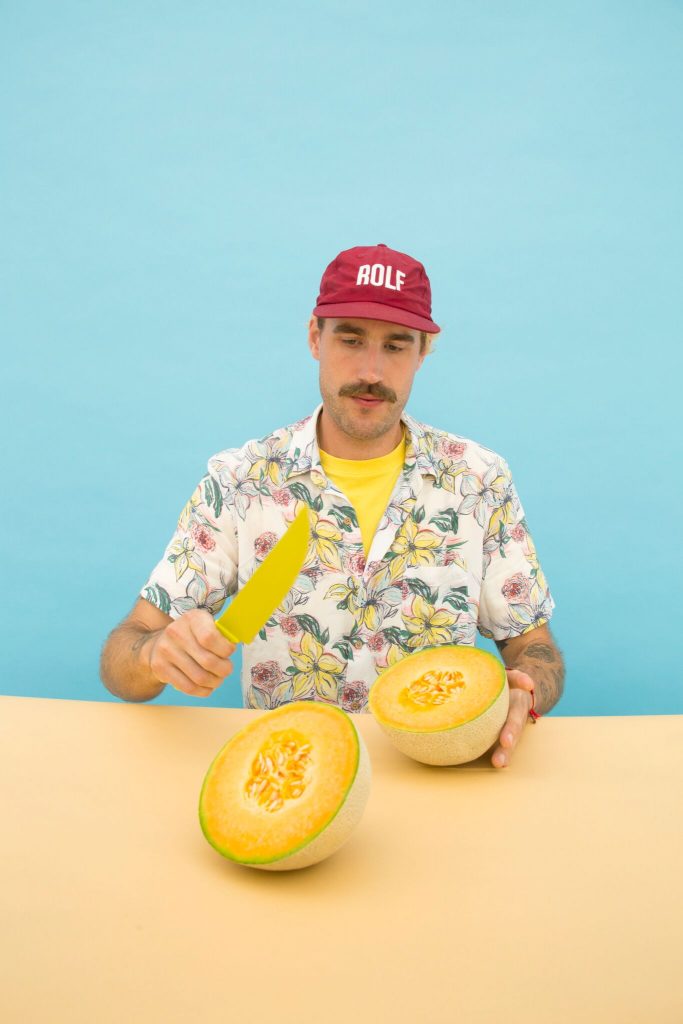 The album’s title reveals the approach: “It’s just two words that sound good next to each other,” he explains with the wave of a hand. “And then in terms of the world, we’re about as awake as we’ve ever been. Whether that’s good or bad, everybody is paying attention to everything, it seems. Weather patterns, political movements—we’re all curious about each other.”

Leadoff track “Strange American Dream” was written during the turmoil of the 2016 presidential election. Over a spring-loaded beat, carefree piano lines, slinky electric guitars, and Baxter’s wiry vocal, the lyrics highlight the changing nature of what it means to be an American.

“I’m going through different kinds of humans,” Baxter says, breaking into the song’s opening verse and hinting that it could be a description of then-candidate Donald Trump. “They’re little snippets, like the guy born into a wealthy family who had everything he wanted, but was twisted from the get-go . . .  And at the end of it, I’m just trying to do my best and be an honest person with other people and myself. But the whole time if you look out your window it’s like, ‘No, everyone is hooked up and tapped in, obsessed with fame and money and power and the me.’”

Likewise, “79 Shiny Revolvers” comes off like a scathing-yet-lighthearted indictment of American gun culture, presented in a way that lands somewhere between Revolver and Sgt. Pepper’s.

“That’s my desire to write a song about something that makes no sense at all, which is human decision-making and what we do when we’re at the crossroads,” he says. “We make trillions of decisions during a lifetime—I just decided to cross my legs and tell you about it, there’s two decisions right there. Then when someone is running at me and I have a gun in my hand, and they don’t, what’s the decision I’m going to make?” 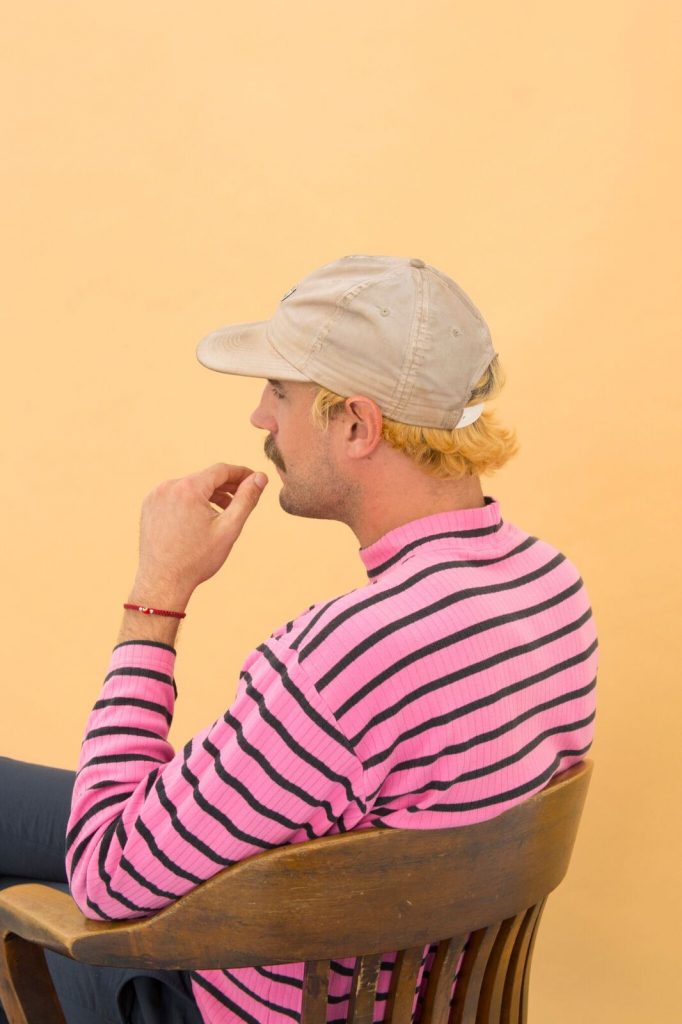 Not every song was written during Baxter’s Kentucky exile. He started writing the first single, “Casanova,” years ago, inspired by a student-loan provider who seemed to behave like a greedy, obsessed girlfriend Baxter had never met.

“There was this rep from Sallie Mae who would call me like seven times a day after I got out of college, saying that I owed some ridiculous amount of money that I didn’t have,” he explains. “Not even like a payment plan, just like, ‘You’re delinquent, you owe this huge number.’”

The track features a bit of suave strut and lots of rock defiance, but there’s also a sense of futility in lines like the chorus opener: “I got a real bad feeling Imma let her down.”

“I pay every month now,” he says with a sigh. “It’s just part of being an American, I guess—you’ve gotta borrow money to go to school, and that strangeness is part of the track. If you’re not exceptionally gifted or a member of society who lives under a certain financial bracket, it’s gonna be really hard to go to college. There is a whole thing of suppression that exists—and I don’t even go that deep with the song.” 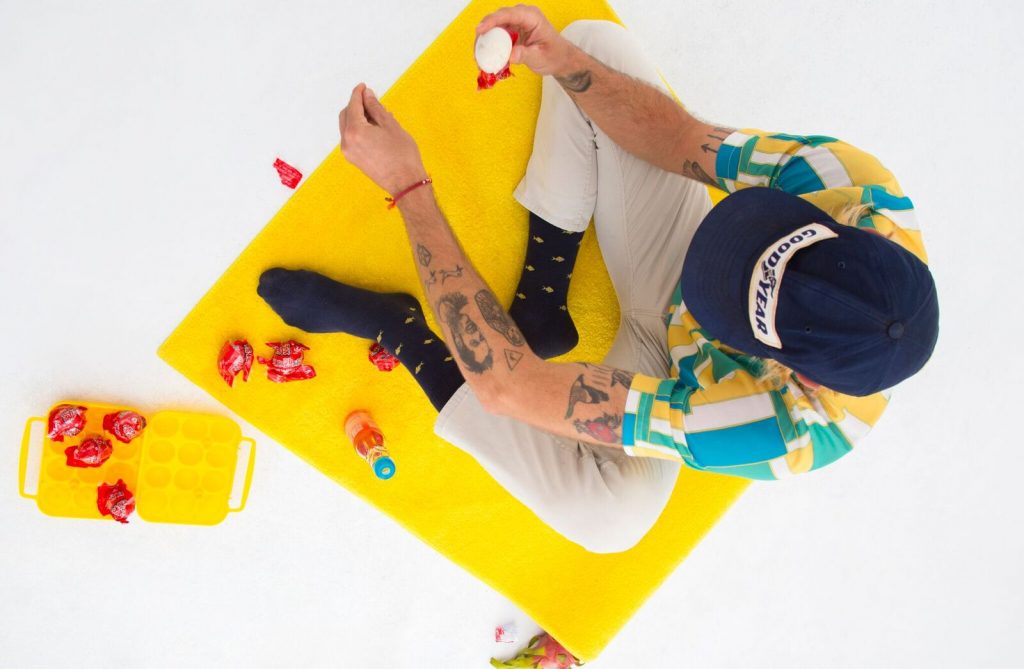 Much of the remaining album explores the more conventional themes of love, loneliness, and lust, while another standout track, “Hey Larocco,” reveals the circumstances that made Baxter an artist in the first place. And it also ties directly into his craving for seclusion.

For a little background: Baxter wrote much of his excellent first album (Feathers & Fishhooks) while living in Israel for six months, feeling inspired by a different rhythm of life and the self-discovery that came with anonymity. Before that, he spent a summer in a tiny Colorado ghost town with a population of about four hundred. Baxter had retreated there to do some soul searching after leaving college, a story revealed in singalong rock style on “Hey Larocco.”

The song recounts a brush with the law in Baltimore that effectively ended life as Baxter knew it—including his lacrosse career, his studies at Loyola University, and his pursuit of an advertising degree. With good intentions, he had intervened in a fight and ended up charged with second degree assault, spending three nights in jail and getting kicked out of school for a year.

“I just was like, ‘Get off of him!’ And I tossed this guy back, but he was wasted and fell backward into a tree, and a broken branch sliced his head open,” Baxter explains, elaborating on the upbeat track’s backstory—a vivid tale that brings the anthemic character studies of artists like Bruce Springsteen, Elton John, or even Billy Joel to mind. “The campus police showed up immediately and were like, ‘Did you do this?’ I was like, ‘Uh, yeah. But . . .’”

As a result, Baxter moved back home and, inspired by his pedal-steel-playing, former Bob-Dylan sideman father, Bucky Baxter, took up a new hobby. The assault charge even lingered on his record until two years ago, when he was finally allowed to enter Canada on tour. But in keeping with the album’s theme of big-picture thinking, “Hey Larocco” isn’t angry. In fact, it comes across as full of joy and even a little gratitude. 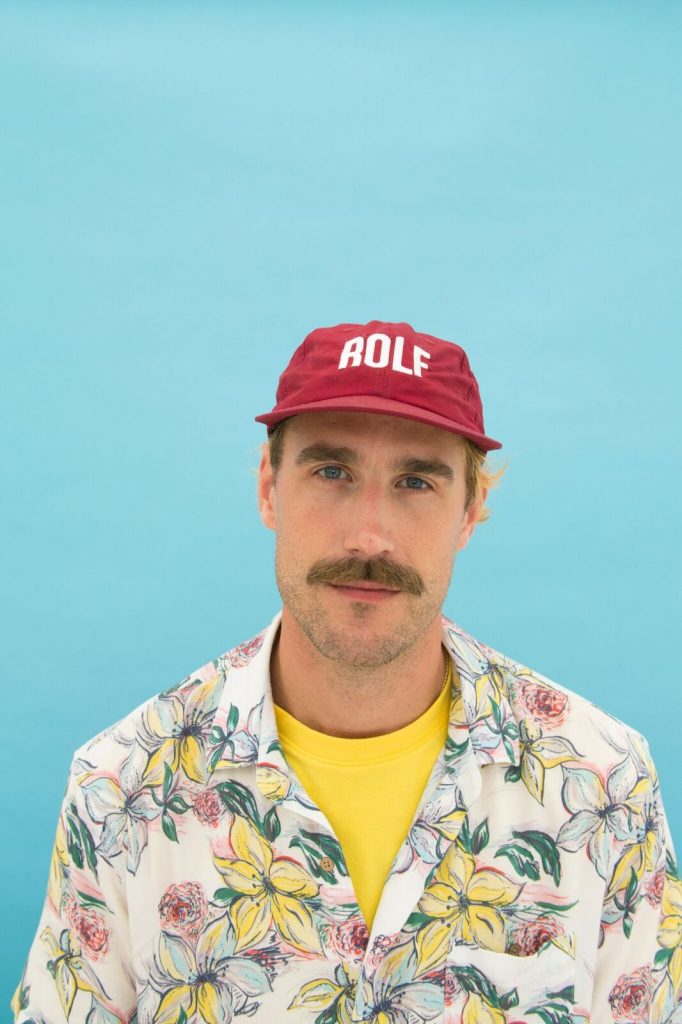 Being stuck in jail for trying to help a friend, then being shunned by the school he was trying hard to fit into, actually set Baxter up to embrace the path he follows today. Ever since that moment, he’s been making his own way, dropping off the beaten path from time to time and looking at life with a different, more skeptical perspective. Wide Awake is just the latest product of that experience.

“It was a crazy crossroads, because who knows what would have happened if I hadn’t got in that fight,” he says. “I got kicked out of school for a year, so I moved back to Nashville and that’s when I started playing guitar . . . All the time we get bugs on our windshield, you know? And we don’t see past that. So I wrote to remind myself to use the windshield wipers and see the sunset, and notice that it’s an incredible miracle.”